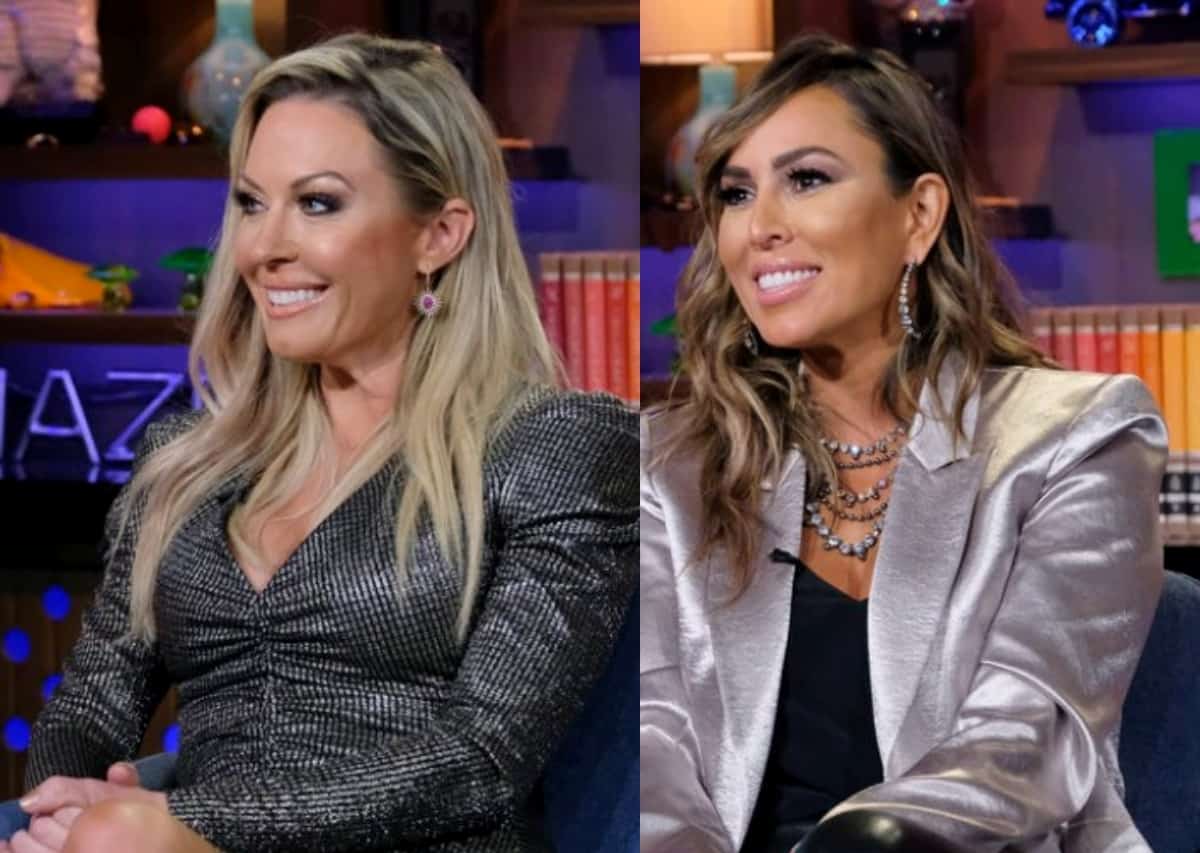 Braunwyn Windham-Burke will “absolutely not” be repairing her relationship with Kelly Dodd following the 15th season of The Real Housewives of Orange County.

During a podcast appearance on Friday, Braunwyn accused Kelly of endangering her children before revealing how she reacted to learning husband Sean Burke had gone on his first date. Plus, Kelly also denied Braunwyn’s “ridiculous” claims of having doxxed her address.

“When she doxxed my house and put all my personal information and my address and put my kids’ lives in jeopardy, I was done, game over. I mean, it was a nightmare. It was crossing a line. You don’t F with my family and she did,” Braunwyn said on Us Weekly‘s Getting Real With the Housewives podcast on January 15.

Braunwyn also accused Kelly and other members of the RHOC cast of lying about her throughout season 15.

“A lot of people [were] saying that I hired a photographer for Black Lives Matter – no, I didn’t. They said I don’t pay my taxes… so there’s just a lot of lies,” she explained.

According to Braunwyn, her castmates’ supposed lies nearly made her walk away from the show.

“At one point I was like, you know what, I’m not doing this anymore. I can’t just sit here listening to you guys lie loudly and often and believe it. Like, I’m out, you know? It was hard,” she admitted.

As for Sean’s first date, Braunwyn said the milestone moment of her open marriage happened during a time when she was out with her former co-star, Tamra Judge.

“When Sean was on his first date, I thought I was going to be fine and I’m at dinner with her and I’m shaking and she’s like, ‘Honey, it’s OK. It’s OK,'” Braunwyn recalled.

Meanwhile, on Kelly’s Twitter page, she was seen reacting to Braunwyn’s suggestion that paparazzi have been sitting outside of her home and following her everywhere she goes because Kelly had given out her address.

“Claiming I ‘doxxed’ her house so the paps know where she lives is ridiculous,” Kelly tweeted on January 14. “The exterior of her house is featured on the show EVERY WEEK. My video was at night and her house was dark and unrecognizable. What a joke.” 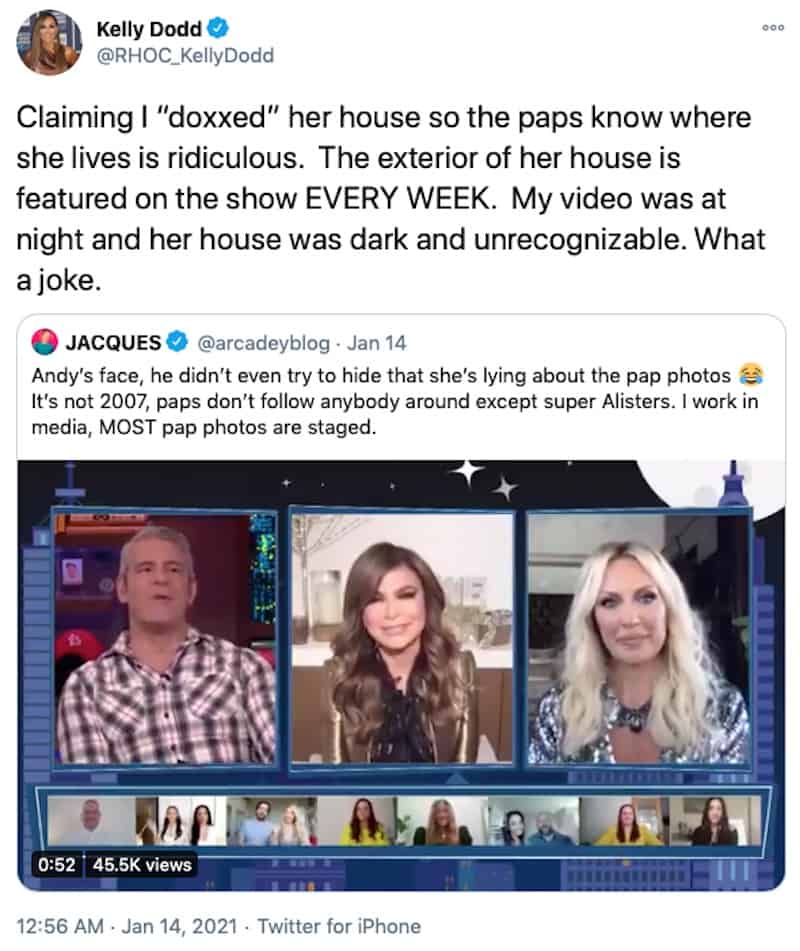 She then commented on a message poking fun at Braunwyn.

“Can you look out the window and let me know if the paparazzi are there?” someone asked, along with a GIF that read, “This girl really is as crazy as everybody says she is.” 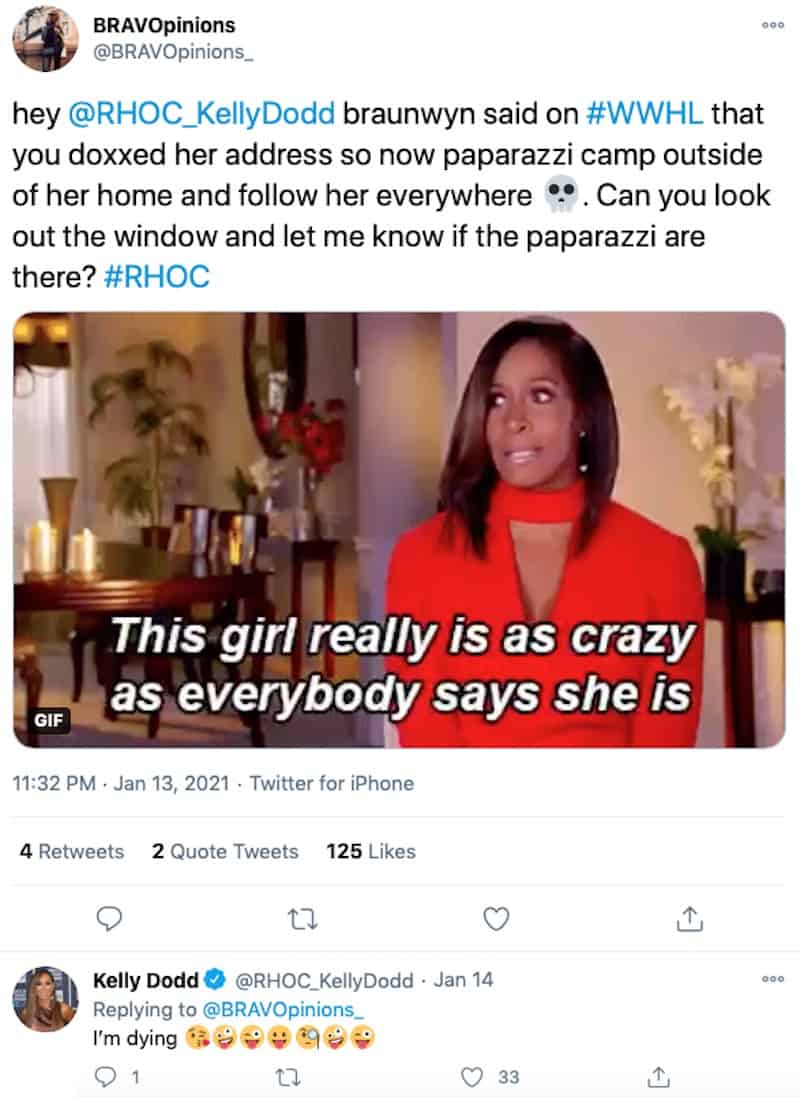 Kelly also re-tweeted a message that said “there’s nothing you can do but pray for this woman.” 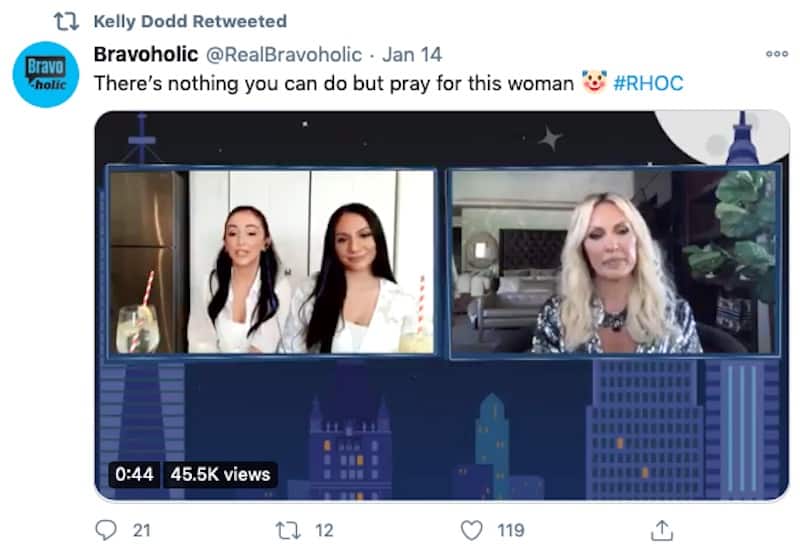