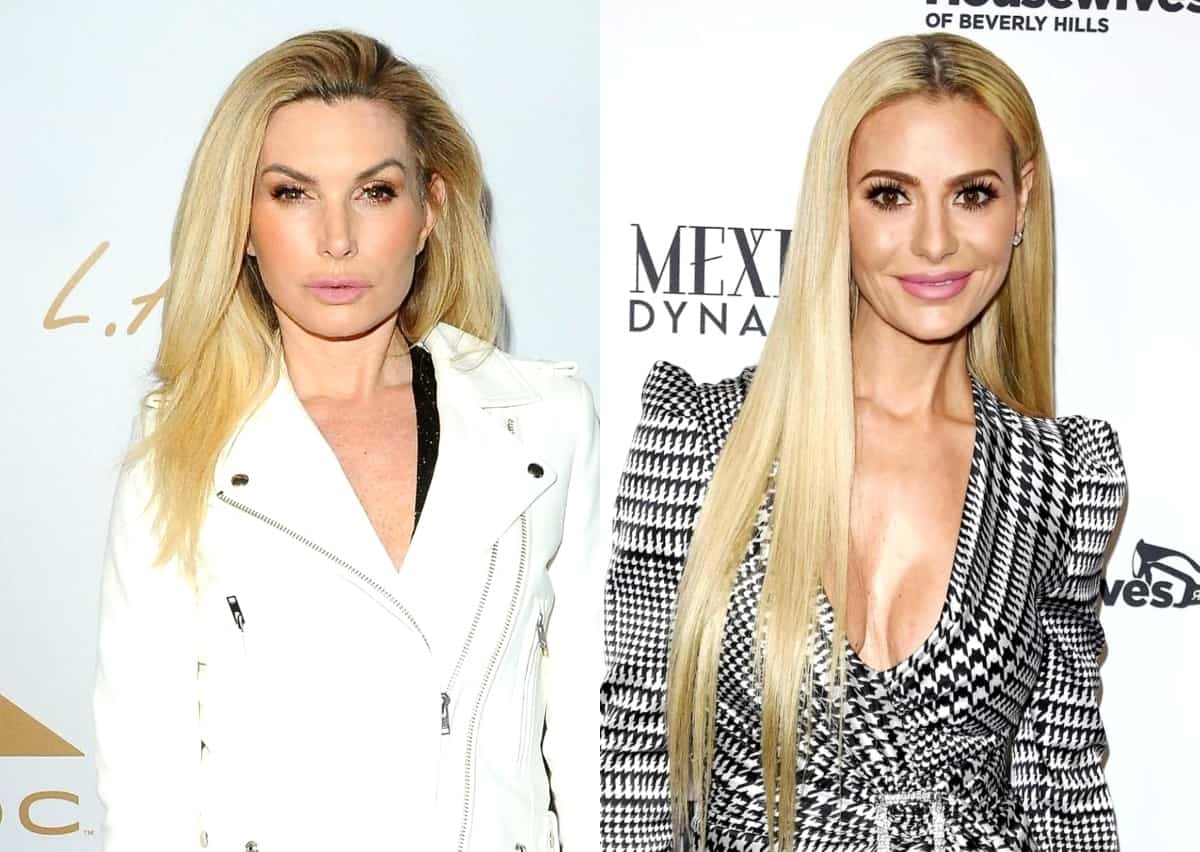 Eden Sassoon took aim at Dorit Kemsley for her evolving look on Twitter over the weekend.

Years after appearing on The Real Housewives of Beverly Hills in a friend role for just one season, Eden shared a couple of posts on Twitter that included not only disses directed at Dorit but also before and after photos of Dorit’s time in the spotlight.

“Why? A beautiful woman [with] some fame [and money] turns herself into a completely different character. Nooooo,” Eden wrote on February 28.

Along with her post, Eden included an old photo of Dorit alongside an image taken during a photoshoot for the upcoming 11th season of RHOBH. 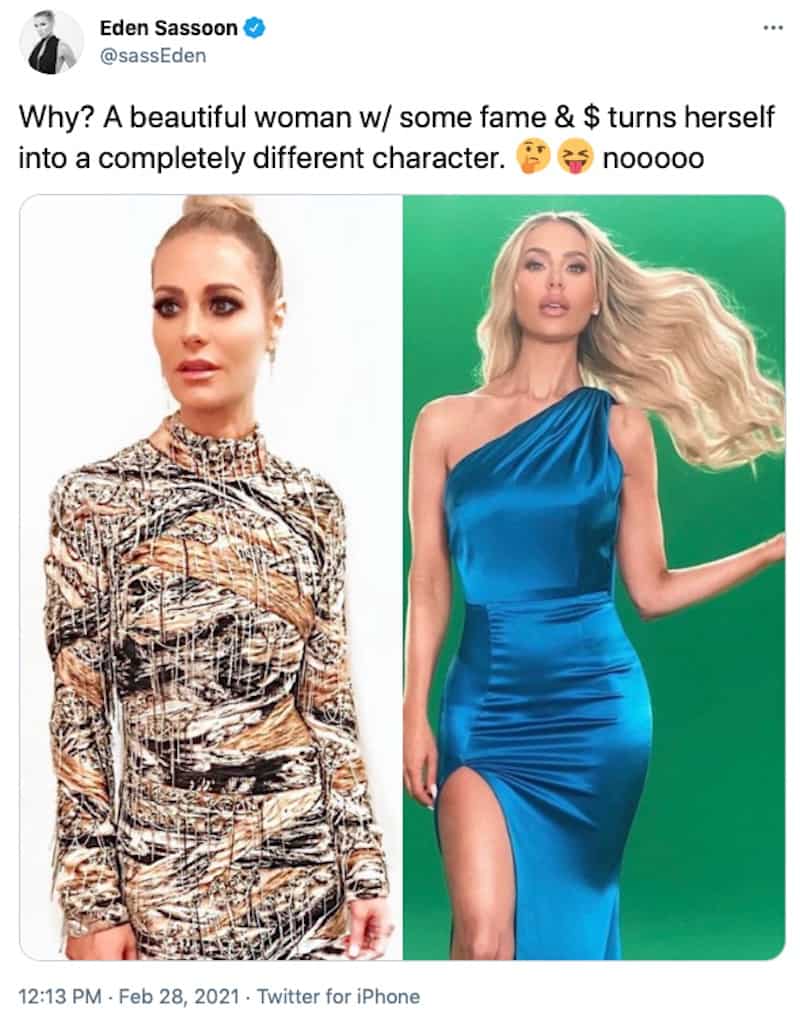 In the comments, fans weighed in. One person said Dorit’s husband, Paul “PK” Kemsley, was able to have three different versions of Dorit without having to get divorced.

“Me personally, I liked version no. 2 ( last season) the best, this one is too Barbie face for me.. crossing my fingers for summer/spring 2022,” the person said.

Another agreed with Eden’s sentiments, saying, “No lies detected. She started with changing her accent, now her entire character. Look at so many of the housewives from season 1 to now, they look like totally different people and they’re now just awful examples for young girls.”

In a second tweet, Eden suggested Dorit had overdone her look and reminded her online audience that true beauty is found within. 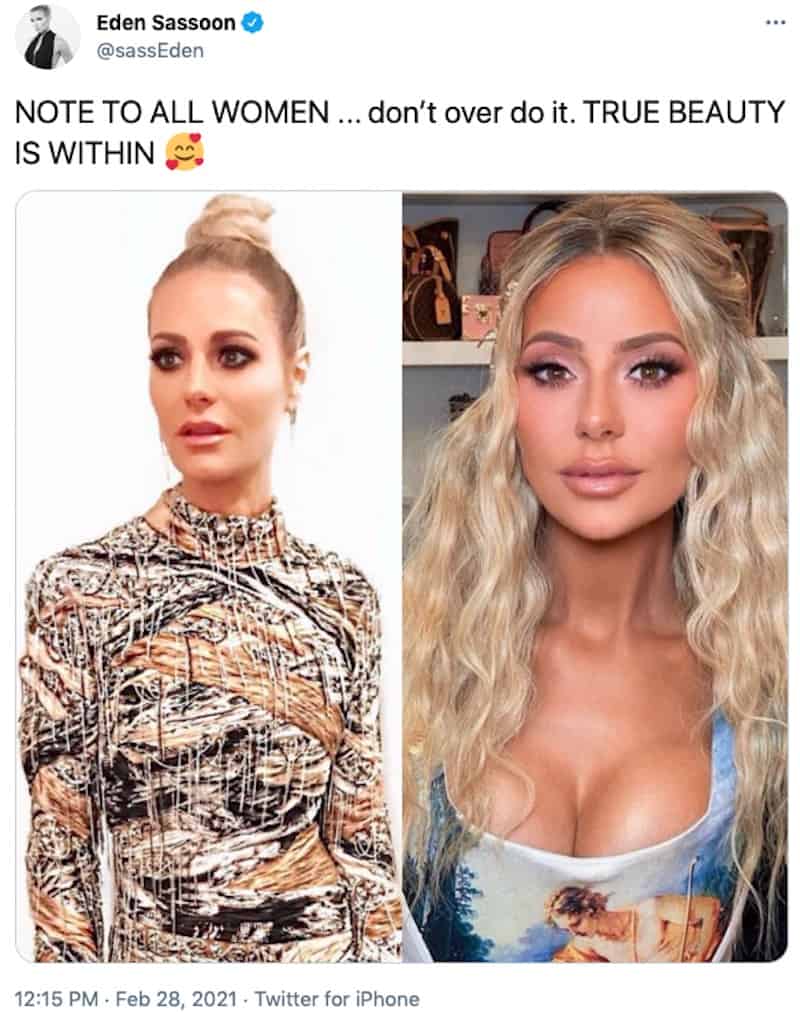 In the comments of Eden’s second post, one fan criticized the former RHOBH cast member for attacking Dorit’s looks.

“True beautiful really is within Eden, and I know for a fact Dorit would never attack another woman’s looks unprovoked like you are. I think that says a lot of your inner beauty, or lack there of,” the person noted.

Another asked, “This you?” They then included a February 2019 article about Eden’s $25,000 facelift, which seemed to prove her tweets were hypocritical.

“I look amazing. I feel 24, I’m 45. It’s been an incredible experience. I see myself in the mirror and that’s me,” Eden told DailyMailTV after the procedure. “I feel like I feel as if this is how I should have always been.”

“From the moment we decided to do this I’ve been ready. I’ve wanted to do this for the last four or five years,” she added.