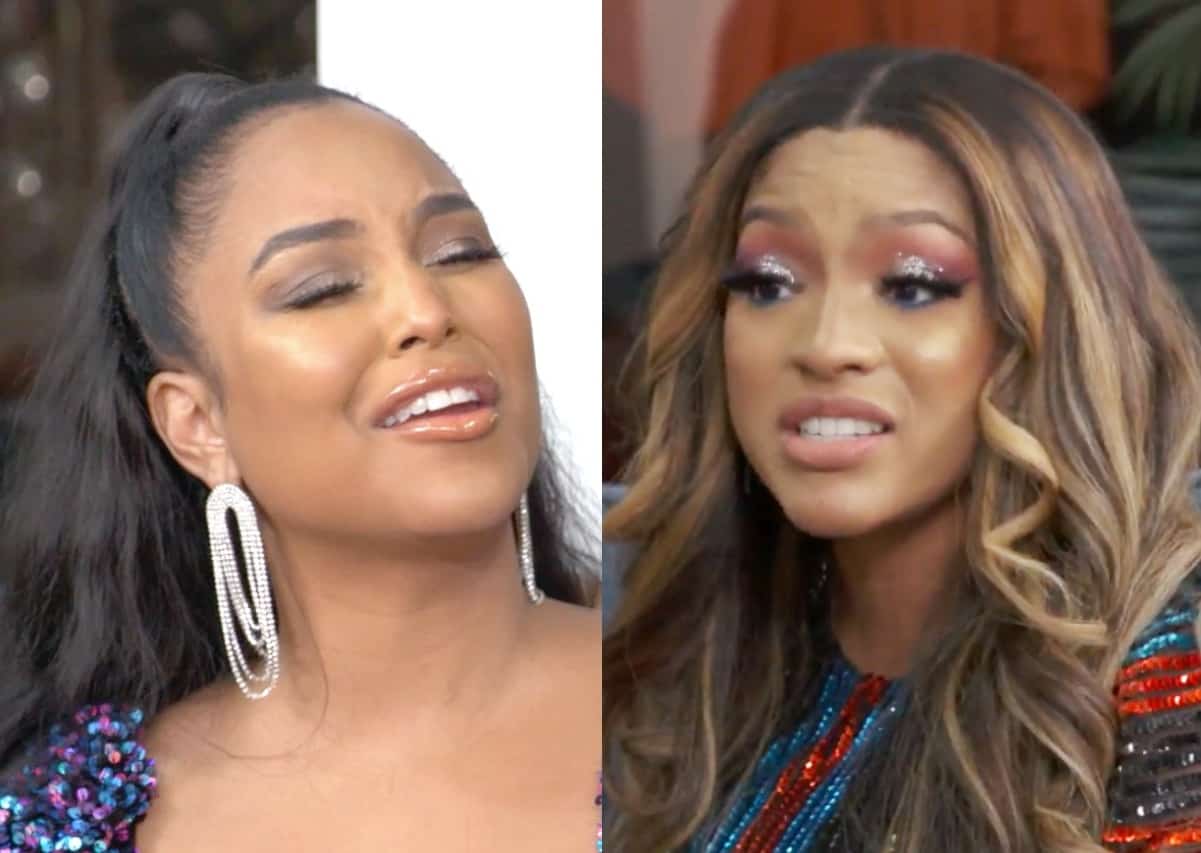 This week on the Real Housewives of Atlanta, we are finally at the season finale! Hallelujah, and it is Christmastime! Cynthia is having a Friendmas Christmas party with a white elephant gifting theme. Drew, Kenya, and LaToya are tossing wigs and nasty shade at each other. We are right back to where we started this season. Let’s rehash this sorry season, shall we?

This season has been a disjointed mess of thrown-together scenes and storylines. It should not be surprising to anyone that this season has had the lowest ratings. Based upon the current tea, it appears that Phaedra might be returning due to the low ratings this season, so they are looking to recycle the old guard. How about bringing “Who gon’ going to check me, boo?” Sheree back too?

Kandi wins an award for her contributions to the city. The council has designated Friday, December 18, as Kandi Burress Tucker Day. Kandi wants to bring more job opportunities to her community. No one can accuse her of not using her housewife platform to further her own opportunities as well either.

Cynthia and Mike are discussing a future “home on the hill” purchase in Atlanta. She is trying to hypnotize Mike using her Get Out vibes. Cynthia and Mike are settling into their marital roles, but time will tell if these two will survive the divorce curse of the housewife franchise.

Porsha is speaking at a rally for the two Senate seats in Atlanta. She is advocating for Ossoff and Warnock. It is memorable to note that voting day is her grandfather’s birthday. Porsha should continue to stay involved and honor her grandfather’s legacy.

Drew and Ralph are taking Josiah to meet up with his biological dad, Ricky. Ricky can’t even keep a call schedule so I don’t know how this is going to work. Drew is making it Josiah Day to make him feel special. Ricky is an hour and 13 minutes late. He finally arrives, and Josiah is clearly uncomfortable around him.

Josiah is showing his distaste for this situation, and Ricky has to painfully pull out any words from his son. He is acting like a nine-year-old boy who doesn’t know this man and has been thrust into an uncomfortable situation ON CAMERA.

Kenya has Dr. Kristy come over to her home for therapy. She shares what went down during Brooklyn’s birthday party weekend. Marc basically invited himself to her home, or so she says. He just jumped into their bed like nothing has happened. Why does he feel that sense of entitlement to their marital bed? These two do nothing but constantly send mixed messages to each other.

Kenya claims that Marc now wants counseling and wants her to drop the divorce. Marc wants to allegedly put their family back together. Dr. Kristy is offering to provide counsel to help them reconcile. Kenya now calls Marc to set something up and gets her phone blocked. How can we believe that a claim of a possible reconciliation is anything but malarkey?

Kenya can’t believe that Marc would block the mother of his child’s call. She now shares that he basically wanted a booty call and for her to cook dinner. Kenya texts him from Brooklyn’s phone (??), and he texts back that he is visiting a sick friend in the hospital. She calls him out and says you can’t possibly be there due to COVID.

Marc has no interest in his own family, and I don’t know why Kenya allows him to continue this farce. Kenya is now going to release her “nasty Kenya.” She will unleash the nastiness that she usually reserves for those other “hoes” onto him.

Cynthia decides to have a Friendmas party with a white elephant theme for the entire group. LaToya texts Cynthia and says she isn’t interested in a drama-filled party. Marlo isn’t attending and will be sending her assistant over with a gift.

How can some of these ladies afford a $1,000 gift? For goodness sake, Drew can’t even pay her tax liens for her contractors. Kenya is shopping for jewelry. She muses that if she was shopping for just Drew, it would be of the dog chain variety.

OMG, there are Christmas-themed llamas! I have seen animals at Christmas parties but never llamas. Kandi, Shamea, and Kenya arrive, and the llama decides to pee in the driveway. Porsha and Drew are late since they are riding over together.

Cynthia’s table setting is pretty and there is some good food for all. There are a lot of rules for the gift exchange. Marlo gets the number eight in absentia. We are now three hours and 20 minutes in and Drew and Porsha FINALLY arrive. Drew comes in with giant boxes filled with big a*s blessings. We now get a montage of all of the times when Porsha was late. Porsha definitely is of the mindset that her time is more important than everyone else’s.

Porsha finds out that she got the number one ticket (which is the worst pick), and she opens a Tiffany bracelet from Cynthia. She isn’t a fan of their brand at all and can’t hide her dislike for this gift. Porsha claims she doesn’t wear necklaces, but production super shadily proves otherwise in clips of her donning necklaces.

Drew is next, and she opens up a bottle of perfume and a mini Gucci purse. It gets stolen by Mal. Drew then gets champagne bottles from the Bailey wine cellar that were dug out of the cellar by Mal.

Shamea is next. She picks Kandi’s gift, which is an iPhone. Marlo puts in $1,000 in cash for her gift. Kenya upstages everyone with $5,000 earrings that Kandi opens. She then gets Chanel purchased by Shamea, but it gets stolen by Marlo’s placing of number eight.  Kenya, who is number seven, ends up with Drew’s trio of gifts. In box one, there is a cat bed filled with her former “pet on her head” wig. Kenya tosses it back into the box, and the other ladies are calling bull on its value. Doesn’t Drew know you don’t dig through your old junk and pass it off as a $1,000 gift?

Drew is not happy that Kenya is dissing her cheap-looking wig. She insists that she spent the $1,000 on her ugly wig and a donation to an animal charity. Drew then pivots to save her job and whips out a recording on an old wonky boombox of our dear Prophet. While they all wait with anticipation for this recording, Prophet Lott is just saying that he likes LaToya. Kandi thinks this tape is some bull, and I agree this is really anticlimactic. Porsha wants to change the channel on this bullsh*t recording.

LaToya arrives in her ugly disco dress. She decided to come get her drama and most likely serve some too. Production probably offered her financial incentive and dragged her out of the house to liven up this dull episode, which still ended up being a total fail.

Kenya tells LaToya that Drew just played a recording from the Prophet. LaToya acts all unmoved hearing about the recording. Drew tells her that she was looking for Prophet d*ck. LaToya says that Drew’s pu*sy is all dried up and her hubby is cheating in Tampa. Kandi makes a good point that the Prophet is a grown man and can mess around with whomever he wants. Really now, why does Drew even care? Drew acts like this has compromised her spiritual journey and her argument really falls flat.

Kenya and LaToya are sneaking gifts out to the car, which is really tacky and classless. They took the Chanel, Gucci, and bottles of booze. LaToya then goes back in for more and slings the wig at Drew, aka the narc. Drew starts lunging at LaToya and security has to pull these two apart.

Cynthia can’t believe anyone behaves this way at a Christmas party. She wants Drew to just “get out” of her house. Kenya is forcing LaToya to get in her car and to stay away from the carolers. She also doesn’t want those commoners anywhere near her fancy car. We now get our final notes from this disastrous season…

Kenya is leaving Marc again and heading to Paris with Brooklyn.

Drew is decorating her new home and not paying her contractors. Josiah is moving toward a relationship with his dad, hopefully with no cameras documenting it.

Porsha is now eating meat, but Dennis is off the table with his bad dogs. She is still fighting for social justice.

Kandi’s acting career is going well, so she will be able to continue benefiting from this show.

Cynthia and Mike are making Atlanta their home base, so no more bi-coastal living. Mike won’t have any interaction with his lady friends in LA anymore, but there are “friends” to be made in Atlanta too!

Next week, we have a prayer in the dungeon-themed reunion. How wildly inappropriate is that? Based upon the outfits, I will have lots to be snarky about next week. I hope everyone has a fabulous week, and be safe!

DO YOU THINK ATLANTA NEEDS TO BE RECAST? WHO WOULD YOU LIKE TO SEE COME BACK?