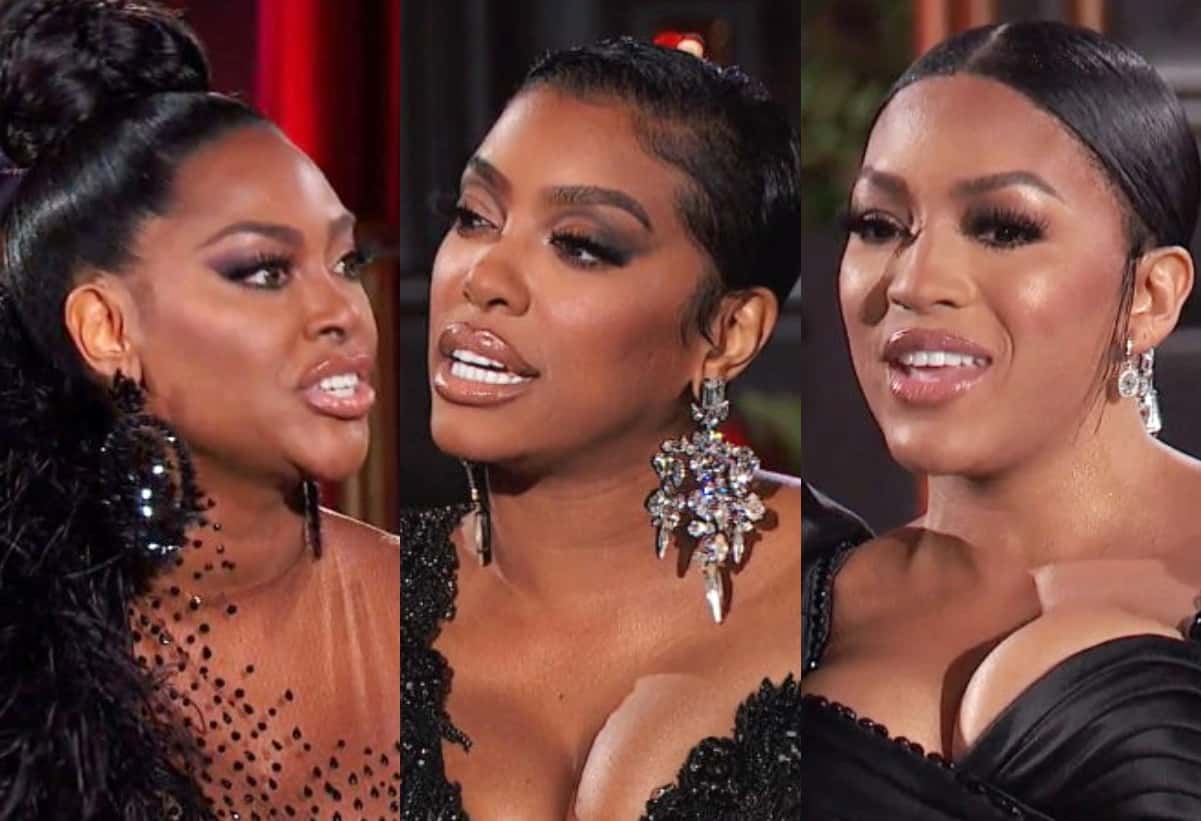 This week on the Real Housewives of Atlanta, we are going deep into the dungeon to expose all of the illicit drama that was aired this season. Let’s get down and dirty with our Atlanta peaches, shall we?

I must forewarn you that part one of the reunion is rather uneventful, but the ending gets pretty heated, so please bear with me. We are finally joining our sexy peaches for the reunion. Bolo’s faux Chanel costume is even on display. We are getting our first peek of the reunion stage and thankfully it isn’t on ZOOM. Trust me, that was tough to recap last season.

Since you can always tell who is getting more airtime by their closeness to Andy, we have Kenya and Porsha. Drew somehow got the second seat on his right ahead of Kandi. I imagine this means Drew will be coming back next season. Andy probably wants to continue drooling over Ralph.

OMG!!! Mistress Kandi, aka Dita Von Teese, looks super-extra, but I guess it is appropriate for a dungeon-themed reunion. Andy will look for any reason to get down on his knees when the “mistress” requests it.  Kenya isn’t looking forward to seeing Drew and Porsha. I am sure the feeling is mutual.

Porsha, aka Peach Juice, looks really pretty but not sure about her hair. Cynthia “Mrs. Cynthia 50-Cynt-Hill” is probably my second favorite outfit tied with Kenya, but I’m not feeling Cynthia’s bland hairstyle. Kenya, aka Chocolate, probably would have rated higher for me if her dress didn’t have the feathery poof on the one shoulder.

Drew, aka Lickety Split, has a dress on that is obviously too tight with a giant ’80s poof on one shoulder. Sorry, Drew, just not feeling it, and your boobs shouldn’t be pushed up so high they are sitting on your clavicle.

We begin with all of the COVID weight gain issues that we have all suffered with. Kenya admits to gaining 30 pounds during the pandemic. She won’t take ownership of the butt implants, though, but nice try sneaking that question in again.

Porsha admits to eating a whole pig during the pandemic. She still isn’t partaking in hot dogs. Kandi hated looking like a frumpy auntie. She had to lose weight since she is filming The Chi now.

Porsha’s complicated relationship with Dennis is now dissected. She admits he checked all of her boxes back then. Porsha comes across really desperate when this “love affair” is shown. I don’t think anyone can get behind him being a good choice for a partner.

Porsha’s social justice fight is now being profiled. She shares that her grandfather inspired her to do better. Andy commends her for using her platform in such a positive way. Porsha is happy that she got politically involved as well since all of their lives depended on it. She even included Drew in the PSA, which wasn’t aired by Bravo.

Kenya is called out on not finding Porsha believable. She felt since she didn’t include her in the PSA it wasn’t for the right reasons. Kenya probably isn’t thrilled that Drew was in Porsha’s PSA either. She insists that she is proud of Porsha’s activism. Porsha didn’t want someone “talking from the curb” to participate in her activism.

Porsha just went to Kentucky for the anniversary of Breonna Taylor’s death. She is angered that none of the officers involved in her shooting have been indicted.

Porsha gets questioned about how many times she tossed the Hot Dog King out to the curb. She insists that she is no longer getting expensive gifts. Porsha admits to now dating, but she allowed LaToya to set her up. She was introduced to someone who was too young. Porsha, honey, why would you go to LaToya for dating prospects?

Kenya then gets questioned on her “alleged” divorce of Marc. We are now tortured by the montage of Marc’s bad behavior again. Kenya insists she has now filed for divorce and wants sole custody of Brooklyn. Did she just say that Marc isn’t asking for alimony now? She claims he misinterpreted the law to make that assumption. Kenya thinks the pandemic made things worse not the fact that he is a total a*s-hat?

Andy questions the other ladies about Kenya’s fraud of a marriage. Kenya was perturbed that Kandi shared her Marc drama with other people who didn’t care for her. Kenya admits that Marc doesn’t want Brooklyn on this show. She thinks he is doing this since he has a huge ego. Andy tries to get Kenya to call Marc to see if he answers. That is a big no-go and she CLAIMS he no longer blocks her calls.

Kenya acknowledges with Andy’s prompting that she is always looking for someone to emotionally fulfill her. She wanted that from her mom and has always been searching for that validation. Kenya said her mom now has sent Brooklyn cards and gifts so she thinks that is a start for some healing.

Drew gets called out for dissing Kenya’s marriage and she takes no ownership of that. She doesn’t appreciate being referred to as “strays.” Drew doesn’t like that characterization since her family is all under the same roof, unlike Kenya. Kenya super-shadily reminds Drew that her baby daddy lives under the roof of a jail. Well, dear Kenya, that is not accurate. He was released — get your facts straight before you vocalize shade from your slam book.

Kenya apologizes to Drew for calling her a stray. Drew thinks she is fake and finds her behavior deplorable. Kenya is called out about her Native American costume. She claims she received a lot of vitriol. Andy tells her not only did she owe them an apology, but Bravo had to actually apologize for something. Kenya says she has aunts who lived on reservations in West Virginia? Hmm, not getting that defense. She found out that customs are not to be disrespected and wearing them as costumes is offensive to their traditions.

Porsha gets called out on her Underground Railroad ignorance. She admits she was irresponsible, but she has since done her homework to become more educated. Kenya won’t admit to being ignorant since you know she is Kenya. She then calls Drew out on a Native American costume that she and her family wore 10 years ago. Ladies, just let it go, you all need to get educated on history and just be more socially responsible.

Ralph is brought out and Andy goes in hard. He wants to know if he has visited any beaches lately. He gets asked about his trip to Tampa. This topic gets side-stepped for now and they move on to Josiah.

Drew says Josiah is building a relationship with his “old daddy.” She gets called out by viewers on sharing this private moment on television. Kandi thinks they have done a good job in working on this issue when Josiah is young. She wished she had done it earlier with Riley instead of waiting like they did with Block. Kandi says Riley is doing great now at NYU. She says that Riley wants the money from Block for herself. Kandi clearly states that cash isn’t for her.

Drew asks Kenya about the retweeted comment about her son’s interaction with his “bio-daddy” (much better than old daddy) being cringey. She felt attacked and thought she would have been more responsible. Kenya won’t take accountability for her liking the tweet and causing Drew trauma. She likens what Drew said about Marc to what she liked about Josiah’s scene with his dad. No, Kenya, just no, there is no comparison.

Drew gets asked about her anniversary dinner and why it went up in flames when Tampa was brought up. She is still sticking to Ralph didn’t cheat, and she believes he is trustworthy. Kandi is skeptical and so are we! She doesn’t understand why he drove past several beaches on the way.

While playing a drum roll sound, Andy wants to know if he went to the stripper capital of the world to visit them. Ralph sidesteps that question again. Drew says she checked his Fitbit to see where he went. Ralph says he will never take off without letting Drew know where he is. Move on with this conversation, please, we learned nothing new other than that Drew will continue to allow Ralph to wipe his feet on her doormat.

Andy asks Ralph about the Bolo episode and Drew’s involvement. Ralph admits he was pissed when he saw the episode even though Drew told him about it. Drew says she and Ralph go to counseling every Monday. She thinks it was disrespectful that Kenya is flirtatious with Ralph. Drew gets slammed about calling her marriage perfect.

All of the ladies take a break backstage. Poor Kandi can’t get out of her outfit to even pee. Drew is talking with Porsha about Kenya’s overall nastiness.

LaToya has arrived backstage, and she tells Andy she is sick with a kidney infection. She only wants a hug from him. LaToya calls Kenya and says Drew sent someone into her room with a camera to give her vitamin C. Drew should have sent antibiotics too and some cranberry extract if she wanted to be helpful.

LaToya struts out on the stage to traumatize us with her presence. She is happy to see everyone but SpongeBob, aka Drew. LaToya apparently can’t remember that she told Andy she had a kidney infection/cold/UTI/STD? “Ralphie’s” barber barged into her room and brought her Vitamin C and she is coming in hot for Drew!

LaToya, aka Petty Peach-less, is coming for Drew since she scored that peach and she is pissed. She slams her fashion and hair. Yikes! They made us wait this whole episode to liven up this sh*tshow. Why do we have to depend on LaToya to light the spark?

Next week, Marlo arrives to show off her liposuction in a barely-there dress. Cynthia gets called out on her pandemic wedding. Shamea is in some get-up that is just awful so we have that to look forward to snark on. See you all next week, and be well!

WHAT DID YOU THINK OF THIS SLOW MOVING EPISODE? WHO WORE IT BEST? TELL US —  THOUGHTS ON THE LATEST RHOA EPISODE?