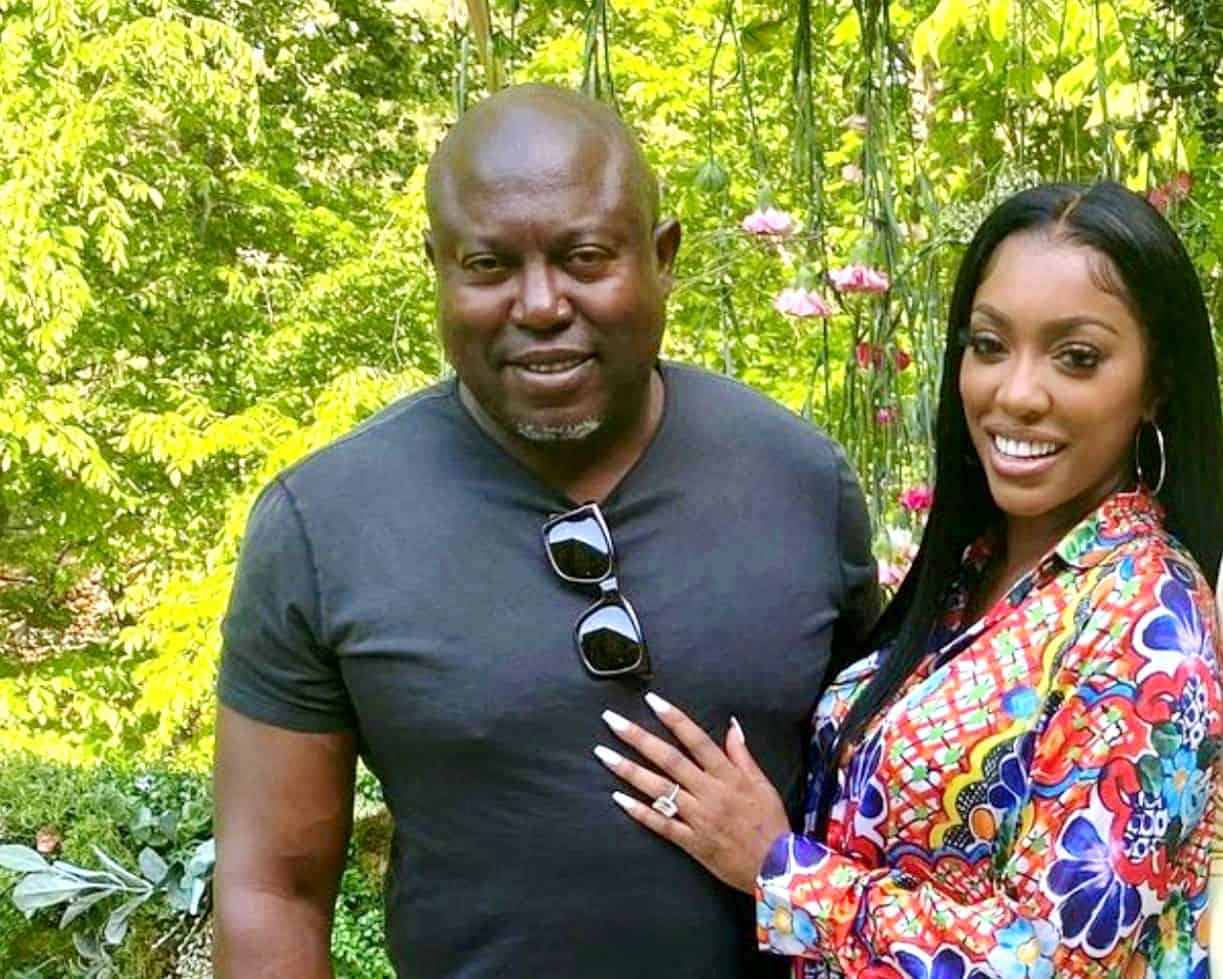 Porsha Williams gushes over her fiancé Simon Guobadia, reveals the exact day they got engaged, and discusses the picture she posted with Simon and ex-fiancé Dennis McKinley.

The Real Housewives of Atlanta star is seemingly still on cloud nine following Simon’s proposal, and she spilled details about some of her recent “special” moments on Dish Nation after taking a weeklong break from the show. Immediately after Porsha’s co-hosts welcomed her back — and told her “the streets have been talking” — the reality star was asked to spill the tea.

“Thank you for all the congratulations,” she told her co-hosts on the May 17 show. “We got engaged the Thursday before Mother’s Day and it was special. It was very, very special.”

As fans likely recall, prior to confirming her relationship with Simon, she posted a photo of herself standing in-between Dennis and Simon, but her hand was on Simon’s chest. Though fans were initially confused, many began to speculate that Porsha was dating Simon, which the reality star says caught her off-guard.

“I had dropped the picture [and] I didn’t think anything of it because it was such a moment,” she explained as her co-stars laughed in disbelief.

“Honestly, for real!” she continued. “Dennis, myself, and my fiancé, Simon, were sitting there and it was just such a magical moment of just being grown adults, and being mature, and wanted to do the best thing, that I was like, ‘Let’s seal this moment with a picture.’ And then we posted it and I woke up and I was like, ‘Wait! What’s happening? Why is everybody going crazy?'”

The mother-of-one then went on to credit God for bringing Simon into her life as it’s something she has been praying would happen for years.

“God is good. God is good,” she proclaimed. “I know it seems fast to everybody else, but you know I’ve been waiting for a love like this, and God answered my prayers. He’s here. And I wasn’t gonna deny it when it was smacking me dead in my face. And so, I’m happy. I’m happy.”

Porsha’s co-host, Gary With Da Tea, began to tease her about the pregnancy rumors as he asked the star to explain the red bodysuit she sported in a recent Instagram post.

Though she didn’t reveal when she and Simon are planning to head down the aisle, Porsha did say she plans to have a wedding when co-host Sherri Shephard asked her if she could help hook her up with another Nigerian man.

“You’re gonna have to pick for yourself when you come to the wedding,” she teased.

The star will likely further discuss her wedding plans in her three-episode Bravo special, which will reportedly begin filming in the coming weeks.