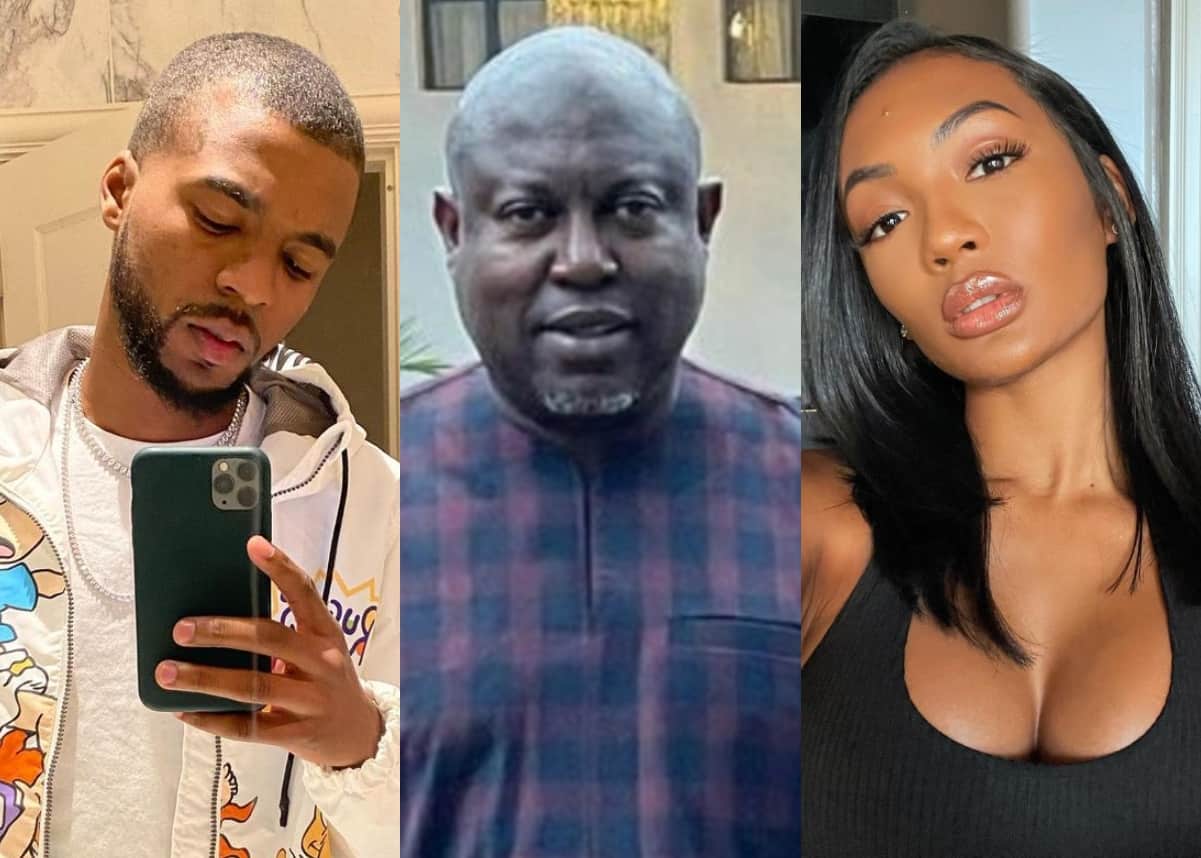 The man accused of having an affair with Falynn Guobadia behind the back of her now-ex-husband, Simon Guobadia, is speaking out.

After Simon took to his Instagram page to share a since-deleted set of receipts, including video footage of the man seemingly sneaking into the home he once shared with The Real Housewives of Atlanta cast member, Jaylan Duckworth leaked text messages sent between himself and Simon and denied Simon’s allegations against him.

“Hey Jaylan, is Falynn with you? She left the St. Regis an hour ago and has [not] responded to my calls or that of Jennifer,” Simon wrote to Jaylan on January 14, according to a screenshot shared by Bravo and Cocktails.

“Yes she told me to meet her,” Jaylan replied.

“Have you seen her?” Simon asked in another message.

“Yes, just [met] up with her. I told her to look at her phone,” Jaylan replied.

In another message, Simon told Jaylan that he was just checking to make sure she was alive and that she hadn’t been kidnapped. 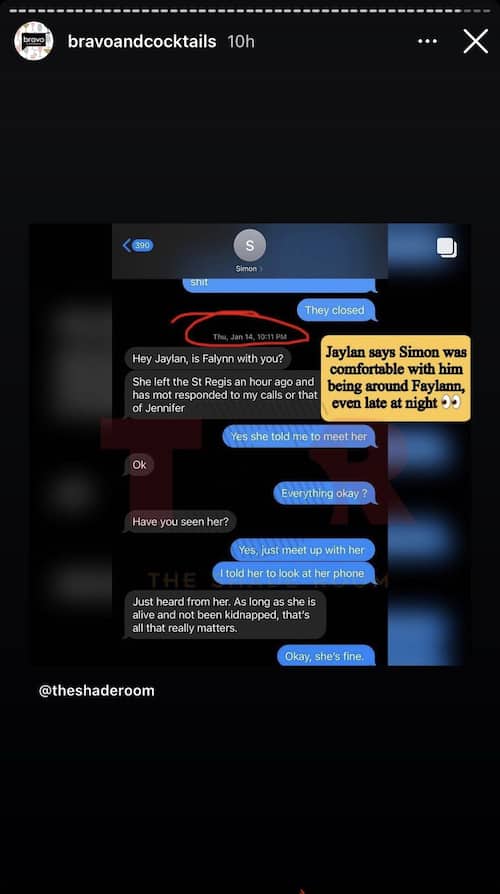 Prior to the leaking of the text message exchange, Simon posted the video seen below.

“When I say I have receipts of a cheating wife, this is what it looks like when Jaylan Duckworth (AKA Jaylan Banks) comes to my home on different days to sleep with my wife while I’m out of town in Miami,” Simon had written in the caption of his clip.

“Wait for the video showing them coming back to my home at the end of a night out trying to avoid front door cameras. The dumb f-cks forgot the security cameras cover 360 degree view of the property. You cannot come on the property without being noticed by security cameras. Smdh. There are more receipts if needed,” Simon continued.

Simon, who is currently engaged to RHOA‘s Porsha Williams, also asked his fans and followers to tell him “how many husbands or wives should tolerate this type of behavior from their spouse” and noted that he had filed for divorce for a second time after coming across the video.

“She got a baby ‘Jesus’ to prove that she was actively cheating,” he added, giving a nod to Falynn’s yet-to-be-confirmed pregnancy. 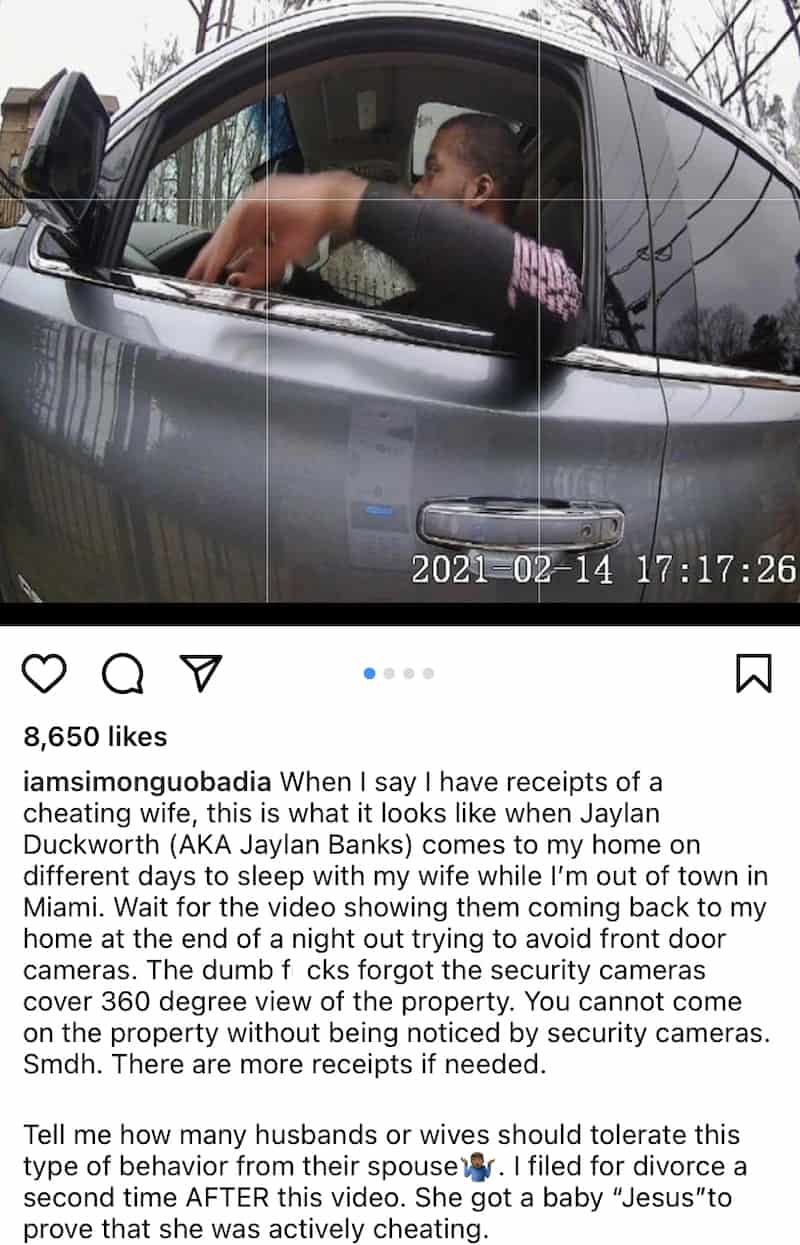 In response to Simon’s clip, Jaylan revealed that his relationship with Falynn was not something Simon was unaware of.

“This is not news to Simon. He has taken some random footage that Falynn has access to as well and has spinned it into lies,” Jaylan told The Shade Room of Simon’s alleged receipts.

According to Jaylan, Simon abandoned Falynn on Valentine’s Day in lieu of a months-long trip to Miami and Costa Rica, and he left her with his two special needs children as well as her three boys.

“At that time, I was not only her best friend but also her assistant. I was there for a whole week (which Simon knew about). I even have my own quarters in the home which is located on the first floor down the hall from the kitchen,” Jaylan explained. “I am very aware of all of the cameras that cover the home as I was present when the house was under construction.”