Home Real Housewives of Beverly Hills News RHOBH Recap: Erika Exposes the Problems in Her Marriage and Shares the Reasons She Filed For Divorce From Thomas Girardi 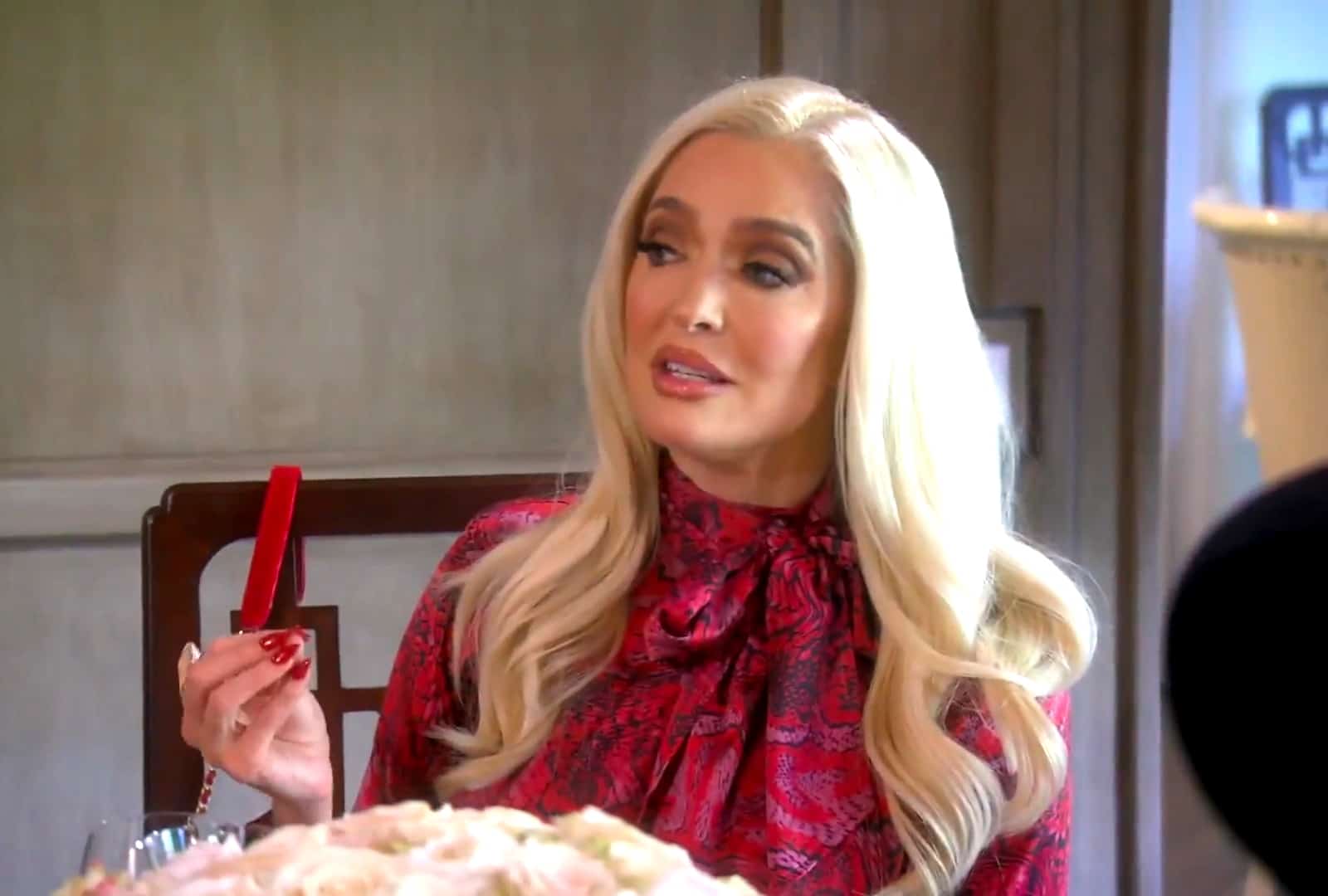 After a VERY long week left to wondering about what exactly would happen when Erika Girardi makes her first entrance post-divorce announcement, she has *finally* arrived. On this episode of the Real Housewives of Beverly Hills, the group waits with bated breath as Erika sashays into Sutton‘s luncheon looking very much put together (and slightly robotic) for a woman who is walking away from 22 years of marriage.

Talk about uncomfortable! The women are walking on eggshells with Erika, who is not exactly the warmest person to begin with. They don’t know what to say to her regarding her divorce and are not sure how to handle her. Erika smizes through a champagne toast and everyone ogles her as if she has a third eye.

They awkwardly sit down to Sutton’s wedding reception — I mean Parisian lunch — and they do their best to talk about something other than Erika’s news. Kyle takes the lead on this and addresses her issues with Dorit. Dorit seems bored with it (much like I am) and is just over Kyle constantly interrupting her long-winded stories.

I wish Rinna would try to pry information out of Erika the way she pried with Denise. Sheesh. It’s all about using your energy in the right places! After uncomfortable small talk, Erika finally comes out with it and states, “Well, okay. Let’s discuss the elephant in the room.” ABOUT. TIME.

Cue the sob story. Erika rambles on about everything she has let go of and claims she felt pushed out by Tom.

“I left because he pushed me further and further out,” Erika shared during her confessional. “The conversations that I used to have were now reduced down to a sentence or two. I just kept walking around that house and knowing that this marriage was headed down a really shi**y path, I had to make a choice to do what was right for me. I couldn’t live that way anymore.”

Erika shares that she intentionally kept the ladies in the dark so she didn’t expose them to any legal liabilities. As most Reality Blurb readers are aware, Erika, along with Tom, is currently facing multiple lawsuits and is being sued for millions and millions of dollars.

“I struggled for a long time knowing that I had to leave but once I made my decision, I spent a good 30 days closing out certain parts of my life,” she shared in a confessional. “I cried every day. This was the end of a massive part of my life.”

Erika continued, “I tried to work this out but I was met with such résistance, such resistance. My marriage was never conventional. He was successful, 33 years older… In my marriage, if I wanted to open up and say, ‘You, Tom, have hurt my feelings,’ there was none of that. It was always dismissed.”

I smell BS — talk about controlling the narrative!

The best part is that Erika chose Election Day to share her divorce news in hopes of it getting buried beneath all the hoopla. Hilarious! Erika continues to slither around certain topics and says vague things like, “As soon as I get a handle on what’s coming for me…” All of the ladies nod like they understand, but they really have NO idea how deep this divorce really cuts.

Despite not having much of her own now (eye-roll), Erika has gotten a new Range Rover and has invited all the women over to her new “tiny dollhouse” — aka a $9,500 a month rental. Although she does not have all of the rooms furnished, she shares that she took some of Tom’s house furniture (gasp — she should really watch what she says on TV!!) for the rental.

Over dessert, Kyle pulls Dorit aside to continue their discussion they were having on election night. In summation, Dorit is long-winded and Kyle is queen interrupter, which means they are an awful duo. However, they realize that their friendship is way more important, so now the argument is water under the bridge. Moving on…they have chosen to focus their energy on other battles, particularly the Sutton/Crystal coat incident. Dorit shares how Crystal felt VIOLATED after Sutton saw her naked, and Kyle continues to minimize Crystal’s feelings about the situation. Once Sutton catches wind that Crystal is telling all of the women about this AFTER Crystal said it was over, she is going to be less than thrilled.

Garcelle has hired a dating coach. She feels as though her picker is off, so Garcelle has turned to a professional to help guide her to Mr. Right. This coach claims she is teaching Garcelle how to fish, as opposed to a matchmaker, who would simply bring her the fish. Garcelle’s way seems like a lot of work to me… Garcelle explains that she is very independent and feels like she must take care of herself to show her power. She becomes emotional discussing her goals, but she is hopeful love is in her future.

Erika’s creative director, Mikey, and her assistant are still a part of her life (…for now — I mean, how does she afford them?!). Instead of glamming her up, Mikey is wielding power tools and hanging picture frames. Erika states that she moved out of the house she shared with Tom in one day. And although she is jumping from 16,000-square-feet to 2,000-square-feet, it is better than being stuck in her relationship. She tells a tale about how Tom once told a coworker, “If you think you can afford her, you can have her” (WHAT), and she talks about the “pressure” she felt to please Tom.

The lack of emotion and robotic behavior is killing me. I start to believe the words coming out of her mouth, but then I think what exactly does this cold woman feel? Turning the bedrooms into shoe rooms and purse rooms and clothing rooms — really makes you wonder how much she is really suffering…

“Kyle is very annoying,” but also, in this case, not wrong. Sutton, girl. It’s about time to get a mammogram. Sutton freaks out the entire time but gets good news about her report. Leave it to Kyle to kill Sutton’s mood. Why would Kyle bring up the Crystal issue in the doctor’s office waiting room? Sutton is shocked to hear that Crystal felt “violated” and cannot believe everyone is talking about this, considering Crystal told her she didn’t want to talk about it with the other women. Drama!

Later, Rinna and Erika grab a cocktail and Rinna starts blabbing about the launch of her beauty line. But really, who cares? Whenever Erika is in the scene, all I want to do is hear about her divorce.

Erika tells Rinna she has never felt so vulnerable in her life and states that Tom left her no “room.” Rinna pretends like she knows what Erika is talking about, and Erika sits smugly as she tells Rinna what happened the day she left. Erika drove Tom to work, told him she loved him, he thanked her (!!!!), and then she straight up moved out. Tom was served the next morning and Erika states there will be no games played. When Erika insinuates that Tom will be in for a tough road ahead, Rinna just stares wide-eyed. She needs to ask more questions! How come Rinna was like a damn detective last season with Denise, but for *this* she remains mute?!

It’s the day of Crystal’s dumpling party. It appears Erika has forgotten her pants and apparently has forgotten that THC will f*ck you up. She talks about using Kyle’s THC oil and how lit she is. WOW. A very open and free Erika shares that she is giving up sex until 2021, which doesn’t seem that difficult considering I am not quite sure she and Tom were romping on the reg.

Crystal finds Sutton to address the coat issue. Sutton is annoyed that Crystal is still talking about it, and the duo decides to bring it up in front of the group to squash the awkwardness. Sutton makes it clear if it is over, then they BOTH must stop talking about it. I mean, Sutton is right. If Crystal is soooo embarrassed and uncomfortable about the situation, why is she bringing it up to anyone with ears?!

Sutton states that the use of the word “violating” is a bit “defamatory.” Crystal wants it to be over and Sutton brushes it off, but she demands an apology for Crystal’s manic comment. Sutton does not appreciate those words, as she explains she was simply having a hard two days on the trip. To this Crystal states, “I am going to believe you.” WTF kind of apology is that?!

After all of the awkward conversation and apologizing (kind of), the women head inside to make the dumplings (finally). Everyone seems to be having fun after all the dramatics. I mean, Garcelle even suggests Erika meet her dating coach in the future. After some laughter, Erika claims she trusts the women in the group, but she states that there is sooo much these women don’t know about her divorce. Oh. But they’re about to learn. Fast.