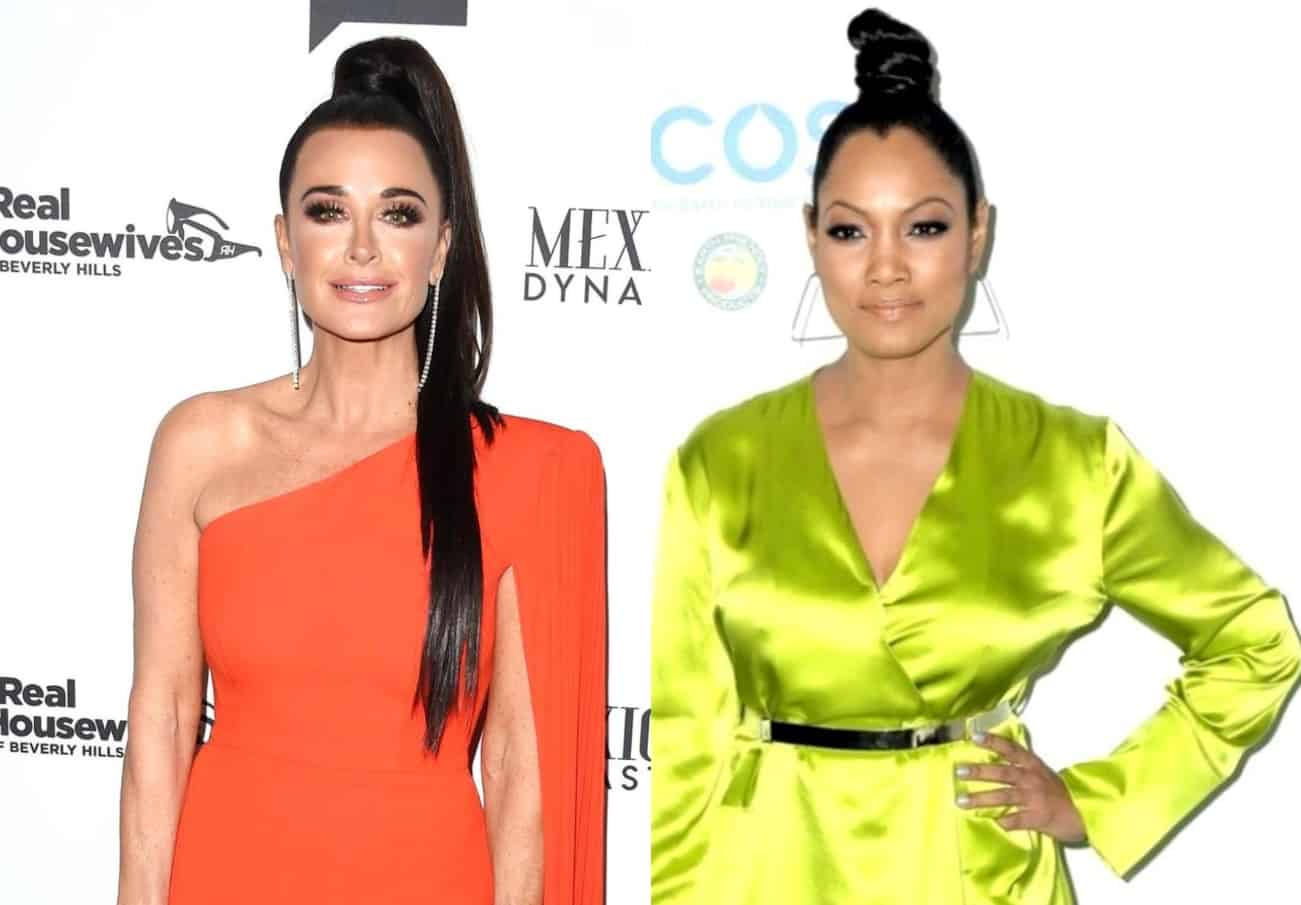 Kyle Richards appeared on Twitter on Wednesday night, where she was confronted about a number of issues recently seen, at least according to some, on The Real Housewives of Beverly Hills.

As the new episode aired, Kyle was forced to defend herself against claims of bullying not only Garcelle Beauvais but also Lisa Vanderpump. She also fired back at a fan who slammed her for keeping her daughters separated amid the COVID-19 pandemic.

But Kyle had no idea what the woman was referring to and wondered, “When? How?”

Around the same time, another social media user labeled Kyle”disgusting” after encouraging her 21-year-old daughter, Sophia Umansky, to keep her distance from her youngest child, 13-year-old Portia Umansky, after she arrived home from college to avoid the potential spread of COVID-19.

“Kyle not letting her children HUG was the most disgusting, unfathomable thing a parent could ever do to their children. Portia was hysterically crying to hug her sister, [Kyle Richards] you should be ashamed of yourself. Truly heartbreaking,” the woman claimed.

Right away, Kyle made it clear that she was simply following the rules of the mandates in Los Angeles at the time, and she was doing what she felt was best for the health and safety of her entire family.

“Do you understand that this was [seven] months ago and we had to wait until it was even ‘safe’ for Sophia to get on a plane to come home [and] that she HAD to quarantine? We are in a different place now,” Kyle explained. 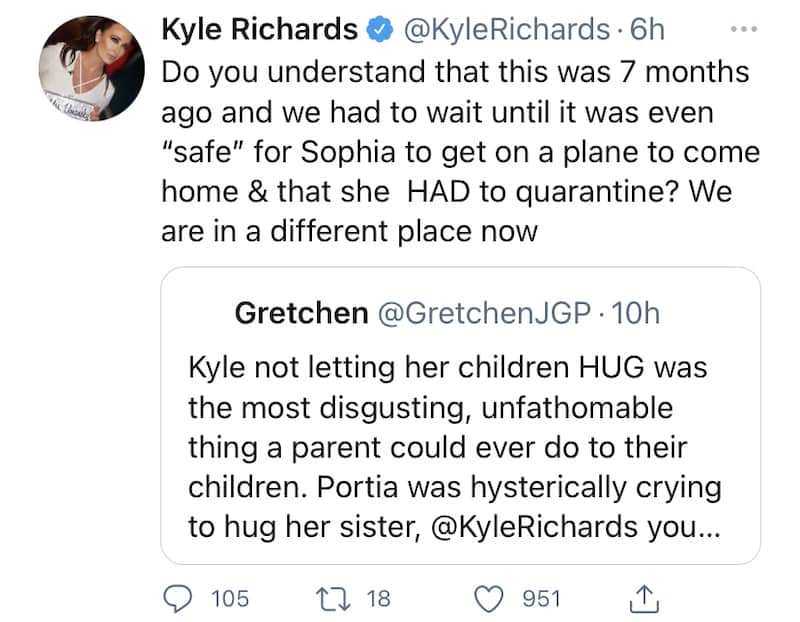 Still, the same woman continued her rant against Kyle, telling the longtime RHOBH cast member that there was no real way to avoid a potential spread because the two girls were living in the same house.

“Well seems they couldn’t avoid the inevitable, they are in the same house! ‘I won’t let my children hug each other even though they will sleep under the same roof with the same air vents [ventilating] the entire household because the television told me so.’ – Kyle Richards probably,” she went on.

In response, Kyle told her critic that when it came to Sophia’s feelings about COVID-19, she was more concerned about possibly spreading the illness to members of her family than catching it herself.

“She was coming from college. Sophia was more worried about giving it than getting it,” Kyle noted. 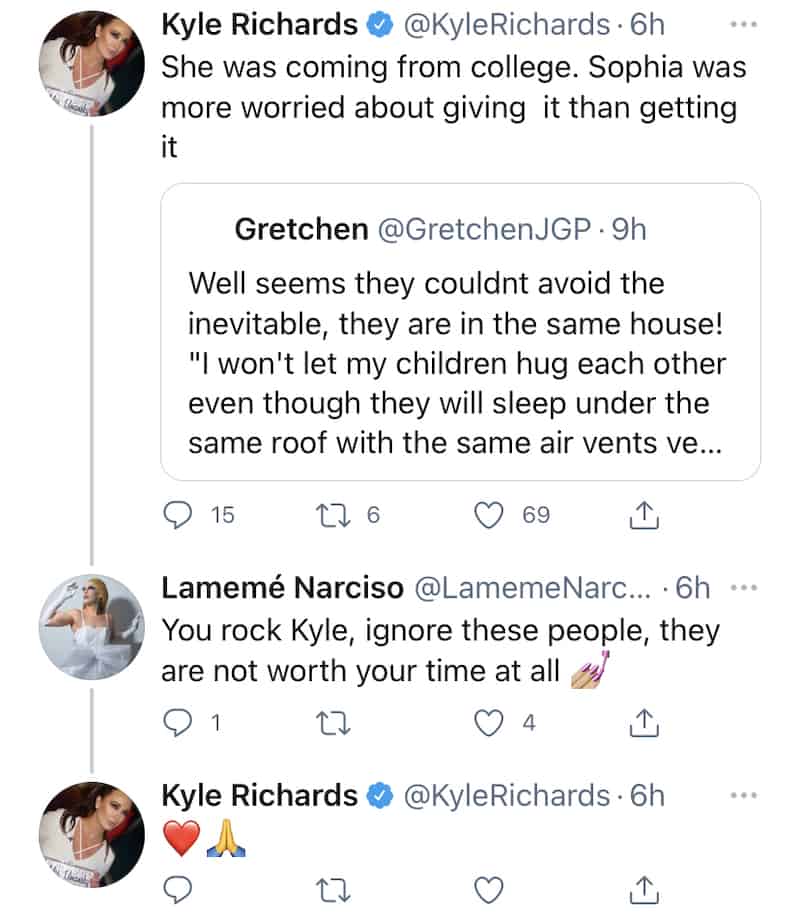 Also on Twitter on Wednesday night, Kyle shared a retweet from a fan who was in awe over the love they witnessed between Sophia and Portia.

“I wish I had [love] like that [Portia] loves her sister so much…I almost [cried],” the retweet stated. 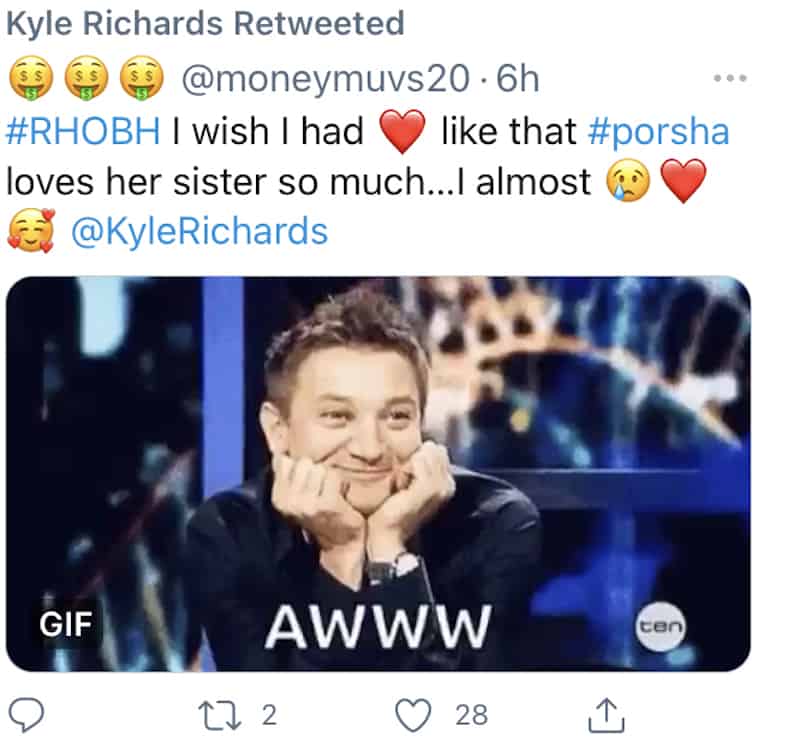 In December of last year, after last night’s episode of RHOBH was filmed, Kyle confirmed on Instagram that both she and Sophia had been diagnosed with COVID-19.

“Some of you may have heard I have COVID. Since I was diagnosed I have been separated from my family in order to keep them healthy. Unfortunately, Sophia also got it. We will stay in isolation until it’s safe to see the family and others again,” Kyle revealed at the time.