Erika Jayne received a shocking death threat over the weekend on Instagram.

As she and her estranged husband, Thomas Girardi, continue to face claims of embezzling $2 million from orphans and widows to sustain their luxurious lifestyle, the Real Housewives of Beverly Hills cast member clapped back at a crazed fan, who suggested he was going to shoot her.

In the man’s message, he told the reality star and performer he was “gonna enjoy watching a 357 put in your head,” before adding, “Rich people can get shot in the f-cking face too.”

“A 357 to my head? Don’t threaten my life,” Erika replied, according to a screenshot captured by Radar Online. 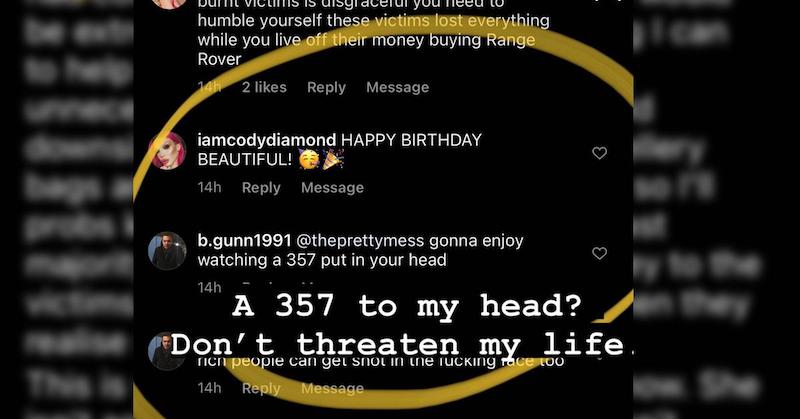 According to the report, Erika also included another message in her screenshot, which spoke of the way in which she and Thomas allegedly stole millions from orphans and widows of the victims of a 2018 plane crash in Indonesia.

“Let’s say she didn’t know (just for a moment) … If I found out my extreme wealth had come from such a heinous crime, I would be extremely humble and do everything I can to help the victims. I would sell all the unnecessary luxury items I have, I would downsize my wardrobe and sell all jewelry bags and shoes but the vast majority I would sell and give that money to the victims,” the message read.

In other RHOBH news, Erika’s former partner, Thomas, is set to have his personal belongings sold off at an auction to pay back the orphans and widows as well as the many others he is accused of stealing from.

According to court documents obtained by Radar Online on July 11, the trustee appointed to Thomas’ bankruptcy case has filed a motion, requesting the court allow him to sell the once-famed attorney’s property.

Among the items the trustee hopes to sell are furniture, artwork, sports memorabilia, office supplies, wine, and a 2011 Cadillac scooter, which the trustee claims have been appraised for $60,000.

A judge has yet to sign off on the motion.