Kyle Richards is fighting back after seeing that her former Real Housewives of Beverly Hills co-star and longtime friend, Lisa Vanderpump, responded to a bogus rumor on Twitter.

After Lisa reacted with concern upon reading a story that accused Kyle of trading stories for negative tweets against her, Kyle told her to “give it a rest” before accusing her ex-castmate of replying to false rumors in an effort to generate buzz around them.

“Kyle Richards gives exclusives and behind the scenes filming rumors to two sources and in return has a deal with them to tweet negative things about LVP,” the false rumor, which appeared to have been initially shared by Deux Moi on Instagram, alleged.

“Kyle takes it to another level with stan accounts on IG as well,” the report continued. “[Andy Cohen] thinks she’s the most popular OG because Kyle puts in so much actual time getting positive feedback from sources that she has deals with. One reason why Kyle and [Bethenny Frankel] had a falling out is because these sources started putting out negative things about Bethenny as well. Kyle wants to be top OG in Andy’s eyes and she had to get Bethenny out of the way.”

After the rumor was first shared on Instagram, it made its way to Twitter. And, after a fan brought it to the attention of Lisa, asking her if she’d seen it, Lisa appeared to be worried.

Then, in response to Lisa’s apparent concern, Kyle put her on blast.

“For the love of God … give it a rest,” Kyle wrote. “Replying to any lie out there just to draw attention to it. Move on.” 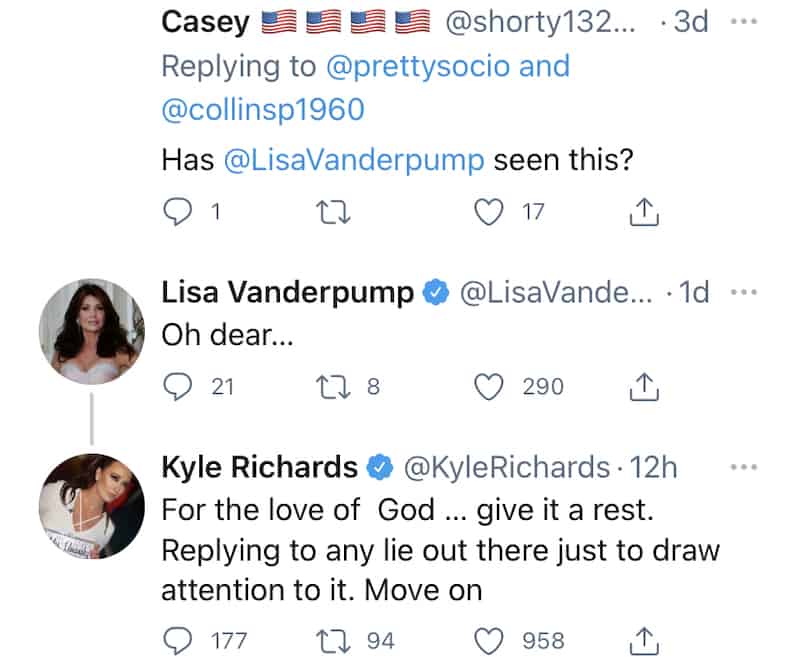 Kyle also responded to a fan who pointed out that the rumor was “clearly made up” and suggested Lisa will do “anything to get those rabid fans stirred up.”

After seeing the tweet, which included an eye-roll emoji, Kyle replied with a 100 percent emoji.

While Kyle and Lisa were friends for many years on RHOBH, they had a falling out during season nine after Kyle suspected Lisa was the one behind a Radar Online story that accused Dorit Kemsley of abandoning the dog she adopted from Vanderpump Dogs.