Erika Jayne just shared her reaction to claims of having ripped off the 1980’s duo L’Trimm‘s hit song, “Cars That Go Boom,” on her Instagram Story.

After the former rap team, which consisted of Lady Tigra and Bunny Dickerson, called out the Real Housewives of Beverly Hills cast member during an interview with The Sun, Erika seemingly proved she did not steal their song as the belongings of her estranged husband Thomas Girardi‘s law firm, Girardi Keese, began being sold off in an online auction.

“I’m not a fan of [Erika Jayne] but she did nothing wrong with [‘Cars’]. She sampled [‘Cars That Go Boom’] from [Lady Tigra] & [Bunny Dickerson] and has them listed as songwriters. They need to contact the publishers or [ASCAP] (25%) & [BMI] (75%) for their cut. It’s registered correctly,” their tweet read. 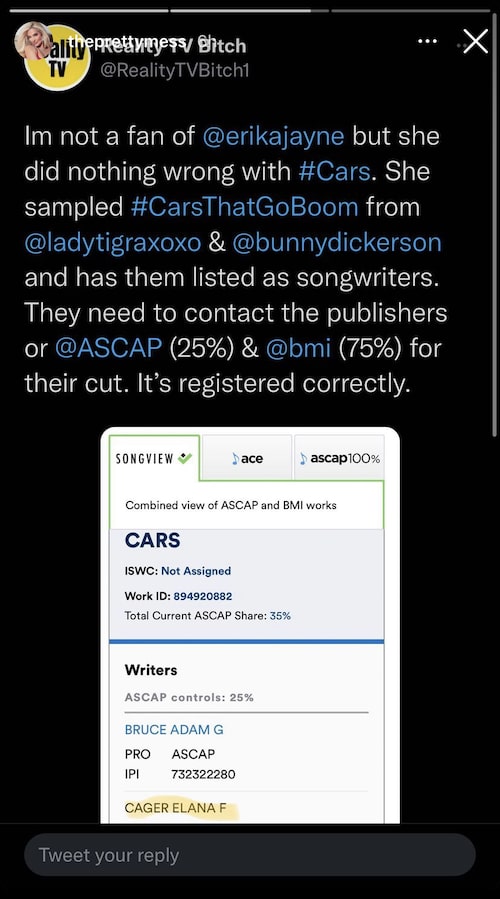 In their interview with The Sun days ago, Tigra and Bunny had blasted the RHOBH cast member for allegedly robbing their track.

“It’s the exact same hook!” Tigra had said. “And Erika never reached out to either of us, and we haven’t seen a penny for it. How privileged can you possibly be that you don’t think that people will recognize that you didn’t make that up?”

“It was blatantly robbed, and to not reference L’Trimm was shady,” Bunny added.

As Erika hopes to move on from the controversy surrounding “Cars” and “Cars That Go Boom,” the items of Thomas’ law firm, which, along with Thomas individually, is in the midst of bankruptcy proceedings, are being auctioned off in an online auction hosted by 360 Bid as a trustee assigned to the case attempts to pay their former clients and others, many of whom are owed millions.

According to the home page of the auction, the bidding began on Friday, August 13, and is expected to continue through Wednesday, August 25.

“Known for its famous case against PG&E, as featured in the film Erin Brockovich, the high profile law firm of Girardi Keese filed for bankruptcy in December of 2020. The firm’s assets will be sold to help pay off creditors, including those who have filed claims of fraud against them. The auction will feature the firm’s office furniture, business machinery, and equipment, as well as furnishings and decorations comprised of art, oriental rugs, sports memorabilia, wine, music memorabilia, statues, vintage law (and other) books, a vintage piano, a Cadillac DTS and much more,” a description read. 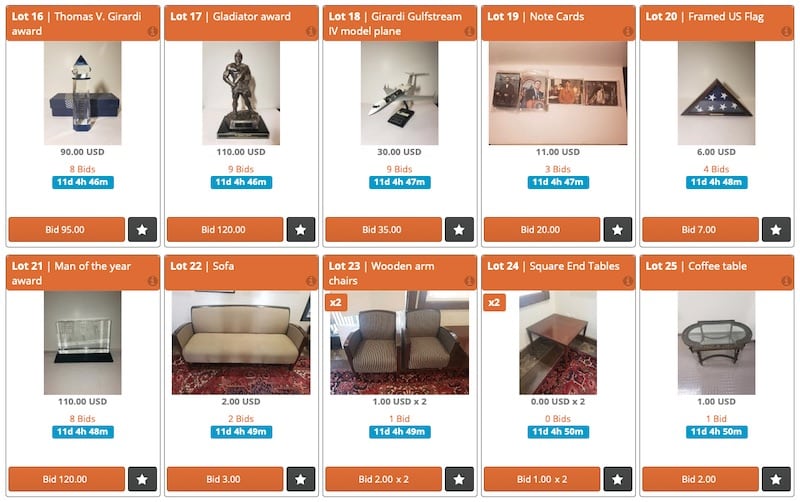 360 Bid noted that all items were being sold “as-is, where-is” with an 18 percent buyers’ premium and that no inspections for the items were available. It was also mentioned that all sales are final.