Home Real Housewives of Beverly Hills News RHOBH Recap: Garcelle Questions Why Erika Isn’t Angry at Tom as Sutton Suspects Erika’s Creating a Defense For Him, Plus Garcelle Calls Out Dorit for Being Two-Faced and Teddi Returns

RHOBH Recap: Garcelle Questions Why Erika Isn’t Angry at Tom as Sutton Suspects Erika’s Creating a Defense For Him, Plus Garcelle Calls Out Dorit for Being Two-Faced and Teddi Returns 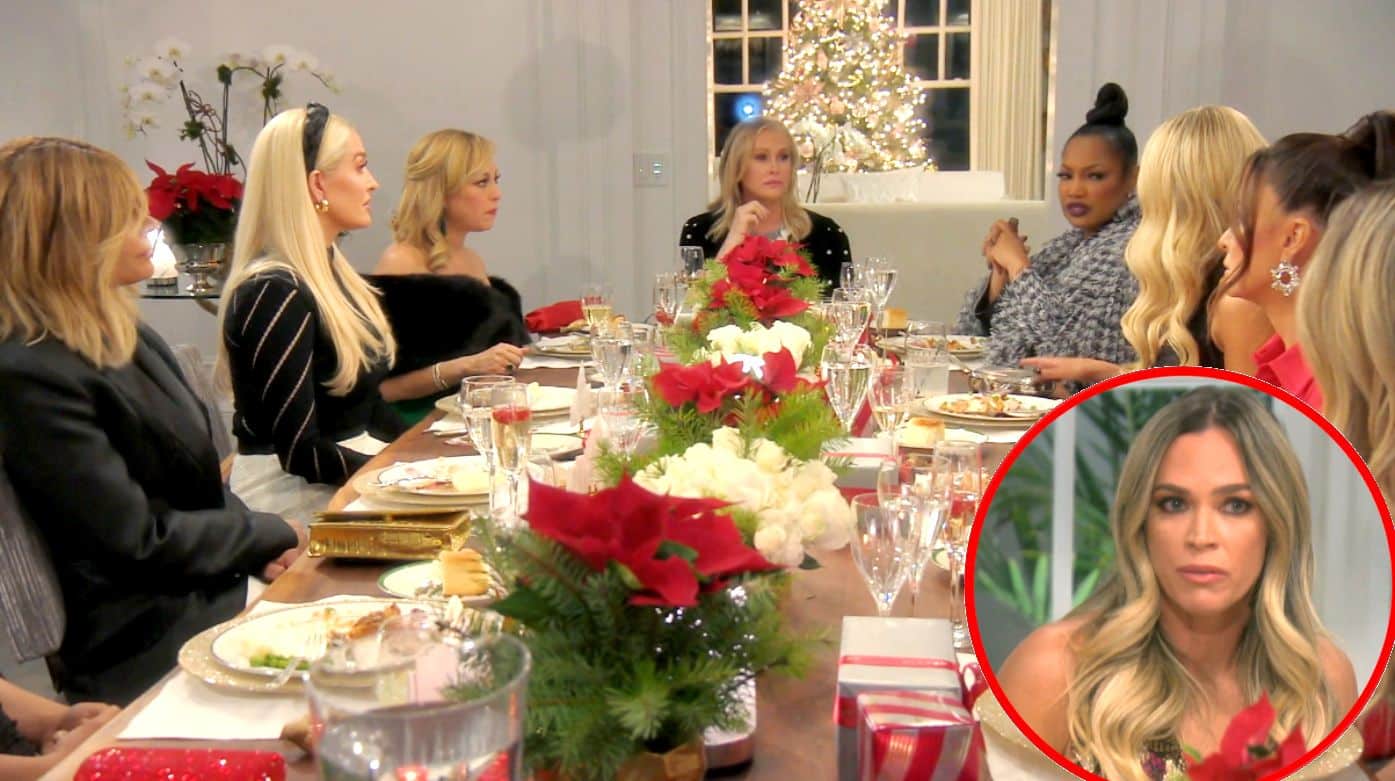 On this episode of the Real Housewives of Beverly Hills, Erika is the topic of the group’s conversation. Who are Erika’s real friends as she navigates this legal hell and who is more concerned about reputation?

Dorit is hosting an ‘oh-no-my-reputation-may-be-marred-because-I-am-friends-with-Erika’ gathering. There, Sutton makes it very clear where she stands when it comes to Erika’s legal situation: “I’m not being a fairweather friend. I am protecting myself. I don’t want my name associated with that.” Sutton is not messing around when she says she wants to stay clean and does not want to be involved in this messy business. Obviously, Rinna has a problem with Sutton being more worried about her reputation than having Erika’s back. Sutton retorts that she is “way more important than Erika Girardi right now.” Boom.

Love how Kyle admits she did not read the L.A. Times article because it was too long but that she did seek legal assistance to translate the important parts. Dorit interjects that she doesn’t “want our support of Erika to be misconstrued of the terrible allegations that Tom and Erika have been accused of.” Everyone nods in agreement, but no one is sure where to go next.

Sutton comes prepared with tea, and she shares that about 10 years ago, a partner’s wife of the Girardi firm sensed something fishy going on and pressured her husband to leave. Curiously, the son-in-law just left recently. Coincidence?

Sutton straight up thinks Erika has lied to them. Case in point: Tom’s head accident injury. Even Kyle realizes that it’s all not adding up. Crystal and Dorit feel like all the issues reiterate that three years seems to be the timeline in which Tom has declined, yet the L.A. Times article states that about 10 years ago things started to go awry. I am not a mathematician, but this isn’t adding up.

Sutton feels like Erika and Tom’s lawyers might have corroborated to have the same “three-year story,” and just as the women seem to be seeing clearly, Rinna jumps in to ask, “Did you all believe Denise last year?” Rinna is very quick to defend Erika but did not think twice about throwing Denise to the wolves. And yes, Rinna. People are gonna be scratching their heads over why you turned on Denise so fast yet continue to stand by Erika “where did the 80 million dollars go” Girardi.

Dorit states her thoughts on the Girardis’ marriage was the “diametric opposite” to what it evidently really is. Sutton whips out her notes to make it easier for this group to understand. Sutton states, “I don’t think that ignorance is an excuse when she’s so smart.” Sutton also points out that Erika has been doing a bit of a deflection when asked about the situation. Kyle decides that she needs to ask Erika because the group feels like they deserve the truth. The timing could not be better, as Kyle is hosting an upcoming Christmas dinner for the ladies; aka the perfect chance to talk with Erika.

Later, Garcelle has her whole family over for some Haitian food and good times to celebrate the Christmas season. She is thrilled to have her son Oliver dining with her. Oliver is there with his wife, Sam, and her three children, so he has become quite the family man. Good thing “Granny” cooked a lot.

Over a FaceTime call the night of Kyle’s party, Dorit and Kyle pow wow and try to figure out a way to ask Erika the tough questions. Kyle informs Dorit that Teddi, the ghost of Christmas past, will be joining the ladies for the interrogation of Erika. Anyone else notice Dorit’s fake excitement?

When does Kyle finally stop trying to convince us all that she knows how to cook? “I don’t let anyone touch my food” …as she allows every housekeeper to baste and cut the turkey. Garcelle is the first to arrive, and when Teddi enters, Garcelle laments that she is “kind of annoying.” Garcelle, I am so happy you just say what everyone else is thinking. Rinna comes in donning some new hair and would prefer being called Heather (eye roll), but nothing else matters when Kathy walks in shouting, “Ho, ho, ho!”

We hear a little bit about Teddi’s kids until Crystal arrives. In case you forgot, the two of them have been friends for almost 10 years. Erika is the last to arrive. Rinna reminds the group that a person is innocent until proven guilty (thanks, lawyer), and the minute Erika sets foot in the house, the whole mood changes and she knows it. “I’m a little radioactive these days.” Interesting that Erika chooses to drive and not incriminate herself by drinking booze and letting something slip, isn’t it?

Can we all just agree that Kyle needs to stop this cooking façade? “I put my heart and soul into this dinner.” It’s awkward, but not as awkward as Garcelle being around Erika after their blow-up. Also, why is Kyle kissing Erika’s a*s right before they are all going to tear into her? Erika explains that she is so tired and so overwhelmed. “And there is more coming. I am far from done.” Sutton can’t handle the BS a minute longer and wants to know if Erika has access to information before it hits the press. Sutton straight-up asks Erika about the timeline of the L.A. Times article and gets the ball rolling.

Erika states that she will not be answering anyone’s questions, and Dorit explains that no one is looking for answers. Garcelle won’t let Dorit be that supportive, particularly when Dorit was one of the leaders the other night. Dorit has suddenly gotten afraid to ask those hard questions of Erika, but Garcelle is reminding her.

To defend herself, Dorit throws Sutton right under the bus and tells Erika that they all discussed her legal issues during a meeting the other day. Imagine hearing that all your “friends” got together to essentially talk sh*t about you and question if you are telling the truth? Erika is certainly not going to tell the truth with cameras rolling — what the heck did these ladies think could come out of this situation?

Erika likens this meeting at Dorit’s to a committee, and Sutton jumps in to say that “we” just want the knowledge. Rinna cuts Sutton right off, making it clear that she is supporting Erika and not on team “To Tell the Truth.”

Garcelle lets Erika know that all the women are nervous to be around her until they hear all the facts.

Sutton wishes to know about the 20 million dollar elephant in the room, and Erika can hardly make eye contact as Kyle asks her if she knew anything about the funds. Garcelle believes that Erika’s answer seems a little “surfacey,” and she brings up an EXCELLENT point as she ponders how strange it is that Erika is not ANGRY at her husband for the alleged behavior. Where is the sadness? The p*ssed off tears? In fact, Erika has shown more anger toward Garcelle than she has Tom.

Erika claims she was kept away from the books, even her own LLC, and when Dorit reminds Erika about the orphans and widows who were robbed of money, Erika barely even blinks.

“Where does 80 million dollars go?” Not sure how anyone can even question that… I mean, Erika said herself that it was *expensive* to be her! Dorit backs down completely and has softened in front of Erika. Interesting that she had a lot to say when Erika wasn’t around. Dorit’s two faces are showing, and neither one is very pretty right now. (Where did Teddi come from reminding the women that Erika’s situation is nobody’s business but Erika’s?)

Garcelle explains that her sister is due to be awarded money from a settlement and the lawyer is dragging his feet. Garcelle understands firsthand what it’s like to be screwed over by a lawyer, and she states, “If what Tom did was absolutely true, then f*ck Tom. Because I know personally how someone feels waiting for their compensation.” Erika states stone-faced that Tom is not mentally capable, and things have just gotten away from him. She seems calculated in her response, almost as if she memorized a speech.

Erika’s seemingly subtle — or not-so-subtle — defense of Tom brings me back to Sutton’s earlier comments in the episode when she mentioned that it seemed that Erika was helping craft a defense for Tom, which appears to be to blame his alleged dementia for his alleged embezzlement, which would explain why Erika put on a whole show in sharing new details about the car accident Tom had three years ago. Erika claims she’s not speaking to Tom, but is she speaking to his attorneys? She seems to be on the same page with them regarding Tom’s defense.

Garcelle makes it clear that the victims deserve to be righted and Erika feigns that she is not worried about herself. Erika does not expect anyone to hold her hand throughout this process, but she doesn’t show one ounce of remorse for AT LEAST what her husband has allegedly done.

Dinner wraps up and the ladies head into the next room for dessert. Sutton takes this opportunity to confront Dorit. She is displeased that Dorit backed down in front of Erika when just the other night she seemed to be siding with her. Sutton states, “Did you throw me under the bus a little bit tonight?” Sutton is a bit disappointed in Dorit. As Erika leaves the party, she states in her confessional, “You can smell the cowards a mile away.” But what about liars?  How close do those need to be, Erika?