Did Dolores Catania Break Up With Boyfriend Dr. David Principe Amid Filming on RHONJ Season 12?

Following the Real Housewives of New Jersey cast’s recent trip to Nashville, which included Dolores’ ex-husband, Frank Catania, and other partners of cast members, a number of tips have surfaced online suggesting that Dolores dumped her longtime boyfriend before the getaway.

On August 29, Bravo and Cocktails on Instagram shared a series of screenshots that included messages from unidentified followers.

In one, which came in response to rumors claiming David and Dolores “broke up,” someone said, “My friend works with David. Went to dinner with him as part of a work celebration of sorts and he said this too! She broke up with him supposedly.”

Then, in a second, another person added that Dolores ended her years-long romance with David before boarding her plane to Tennessee.

“But yes confirming they did break up. She broke up with him before the Nashville trip,” the second follower alleged. 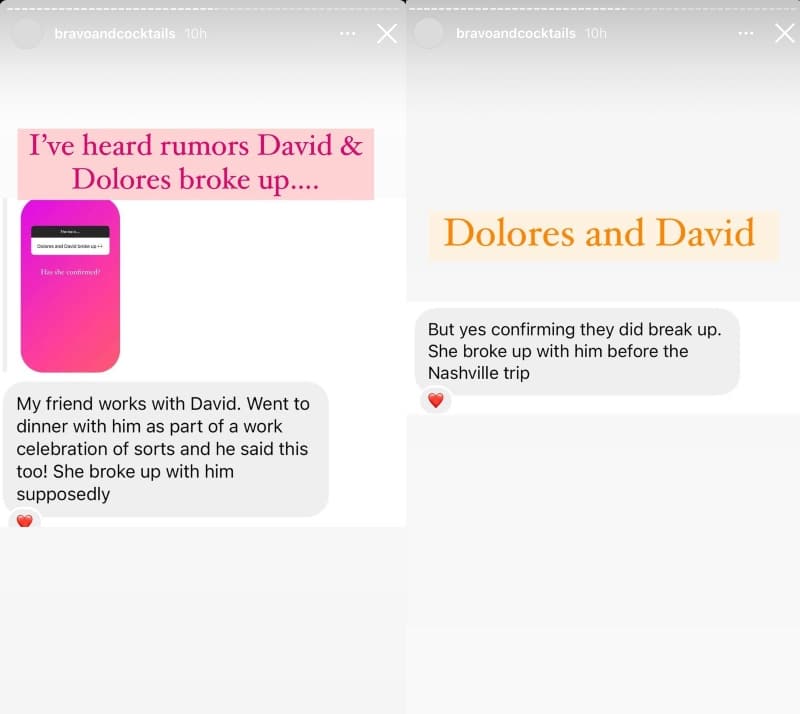 In March of this year, after making it clear that she expected to be engaged by the time David’s new home was completed, which didn’t happen, Dolores confirmed on the Cup of Joe podcast that she “stood [her] ground” and declined to move in with her then-partner.

Then, the following month, she was seen admitting that she’s “pretty intuitive to what’s going on” on the RHONJ: After Show.

More recently, while appearing on Access Hollywood’s “Housewives Nightcap,” Dolores named Frank as her “forever person” before adding that David “may someday be a forever person in my life.”

“If I break up with David, you will see it took me so much to get to that point that there’s no coming back in that way. I’m so done with you that I could be your friend and that’s why they’re all still in my life,” she added.

Dolores and David were last seen on Instagram together on April 16 during a double date with another couple at The Capital Grille in Paramus, New Jersey.

The Real Housewives of New Jersey season 12 will premiere on Bravo sometime late this year or early next year.