Brock Davies took to his Instagram Stories on Tuesday night to shed some light on his situation with his kids after admitting to an understandably shocked Lala Kent and Randall Emmett that he hasn’t seen them in four years on Vanderpump Rules.

Following a scene between Lala, Randall, Brock, and his fiancée, Scheana Shay, Brock shared a couple of posts with his fans and followers, including one that featured a link to a January 2020 clip of him explaining why he left his children in Australia.

“Back in 2019… A little understand if it helps… I love my family and I wish I was in a position to handle myself differently,” Brock wrote on October 12, alongside a video titled, “The American Dream.” 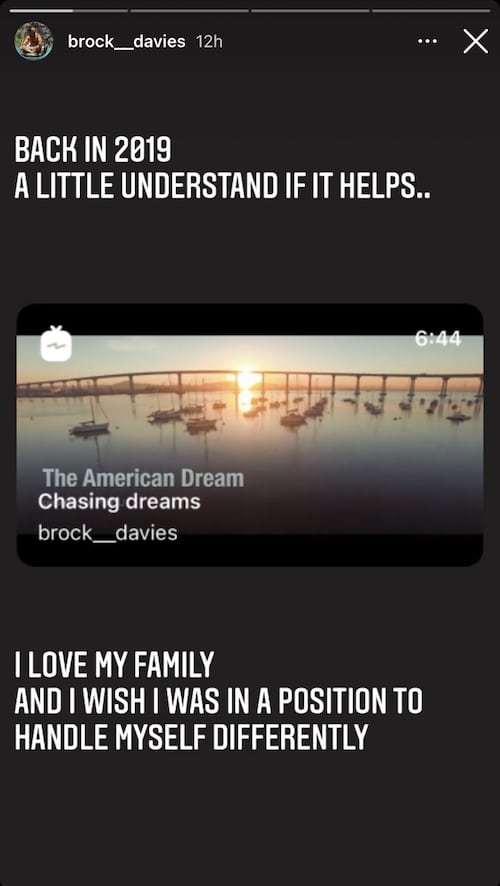 “Why did I move to America?” Brock begins in the short clip.

“So long story short, my parents separated when I was really young. It affected my older brothers a lot more than me. But they loved football… so it was kind of like a little tie for me, knowing that my dad and my older brothers loved it. I met my brothers like three or four times ever since from the age of four until about 16. So my tie to them was, ‘Okay, if I can play a sport, make them proud, maybe [it] will bring the family back together.’ The idea was to come here, save the family, and do it by playing football,” he explained.

Brock went on to reveal that after two years in college, where he played as a defensive lineman, he attempted to get signed by the NFL team. However, after learning he wasn’t eligible to participate in the draft and spending weeks fighting with the NCAA and NFL, he suffered an ankle injury.

According to Brock, he moved to America for his family. However, because he didn’t initially see success in professional sports, he chose not to return to Australia. As he explained, he didn’t want to return with nothing to give to his kids — and nothing to show for the time he spent away from them.

While Brock ultimately saw success as a gym owner and was recruited to the USA Men’s National Rugby League Team, he didn’t get to play in the 2020 season due to the COVID-19 pandemic.

Also on his Instagram Stories, Brock shared a message of thanks. 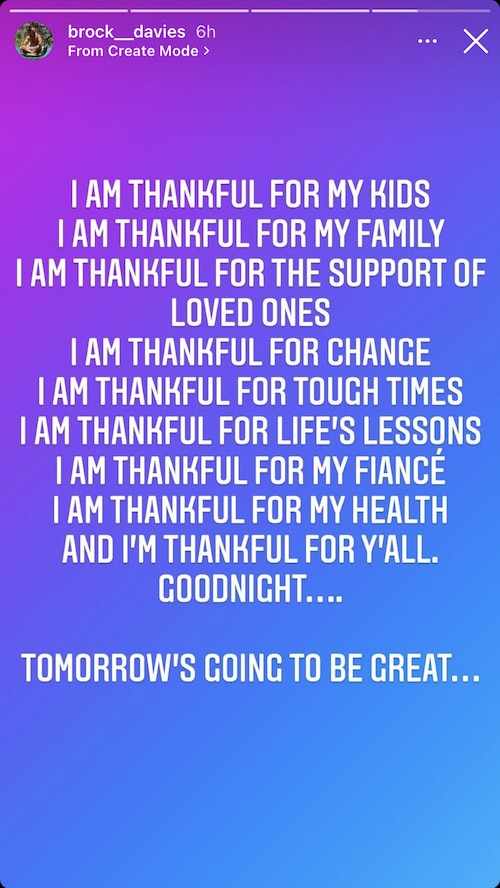 As fans saw on Tuesday’s episode of Pump Rules, Brock left son Eli and daughter Winter behind when he left his home country. And although the children were in the United States for some time, he hasn’t seen them since he dropped them off at Denver airport.

“Me and my ex, we had two beautiful kids. We split up and she felt like I abandoned her and the kids by coming to America. She moved on with the kids’ stepdad, who then fulfilled the role of being a dad for my kids,” he shared on the show.

Weeks ago, prior to the Pump Rules premiere, Brock spoke to Page Six about his estrangement from his children.

“Those are my kids, and their life was private, and they didn’t decide to date Scheana. I did,” he said. “I had to step up to the plate, know I have a past, and if I could change it, I would. But at the same time, we’re here, and I got to make sure I do the right things going forward, and you guys will see all that unfold.”