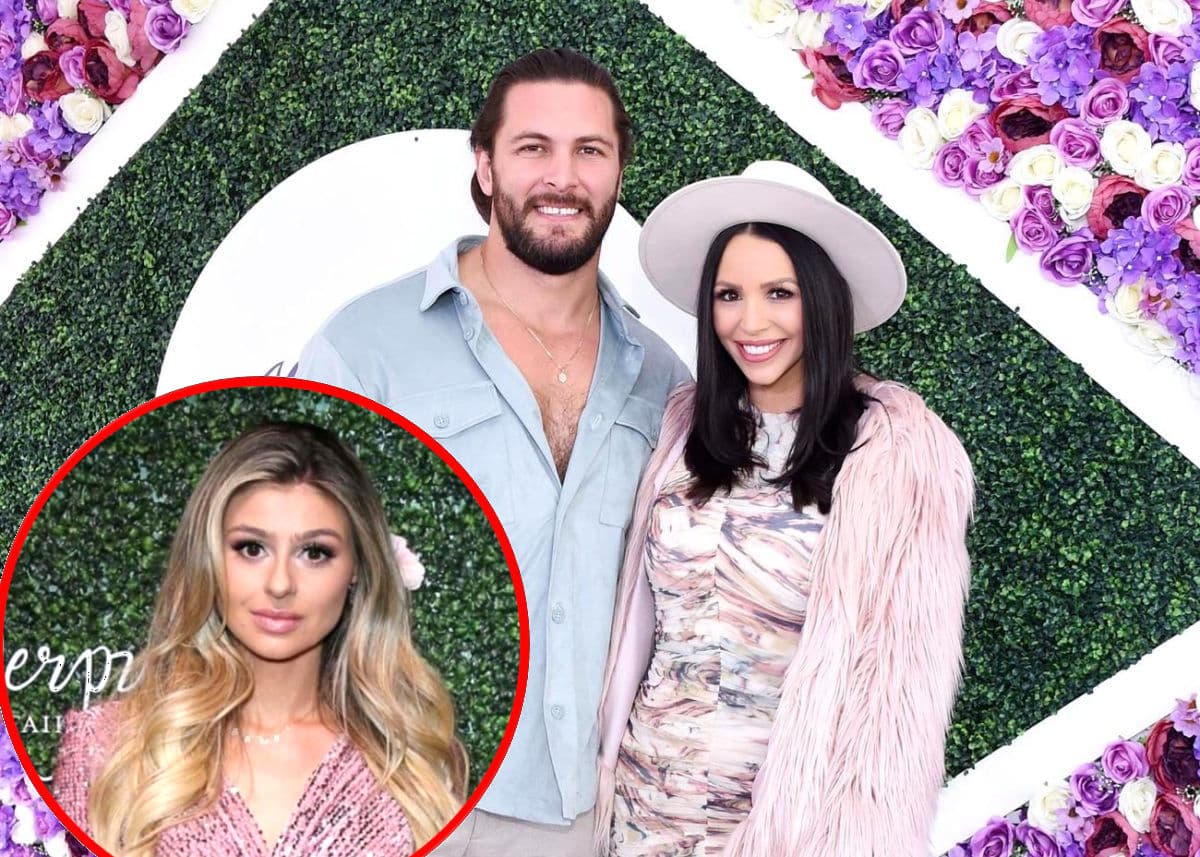 Scheana Shay is firing back at her critics on Twitter.

Following Tuesday night’s Vanderpump Rules finale, which featured James Kennedy and Raquel Leviss‘ engagement party weekend in Santa Barbara, California, where her fiancé, Brock Davies, hoped to secretly wed, Scheana defended Brock against claims of being “tacky” and addressed a viewer who slammed her behavior toward Raquel as “cringeworthy.”

“THIS event was about Raquel & James Kennedy. Very tacky for Brock to even consider that this was going to be okay,” a fan wrote on January 18 in regard to Brock’s plan to secretly tie the knot with Scheana during their cast getaway.

“Yes, THE PARTY was about them!!! The rest of the weekend we had time to do our own things. We had literally soooooo much down time,” Scheana explained in response. 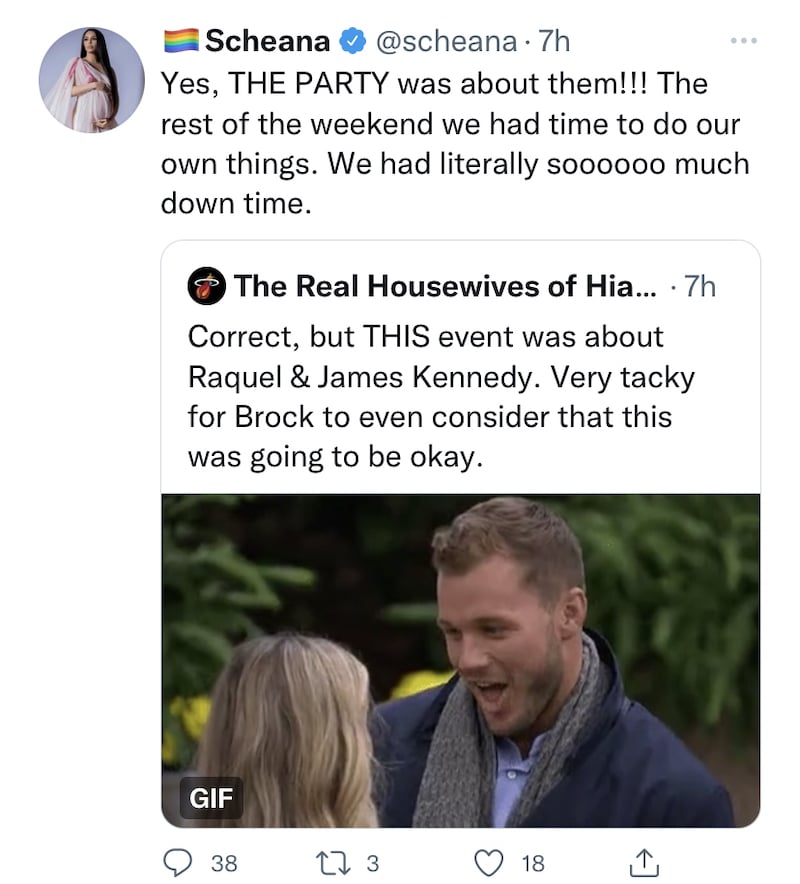 Another show viewer wrote, “[It’s] so tacky that Brock wanted to marry [Scheana] at an engagement party but they’ll probably have the ceremony while [Raquel Leviss] and [James Kennedy] enjoying their party together with family and friends.”

“That literally was NEVER happening!!!!” Scheana replied. “Omg. We were not getting married AT their party. Omg.” 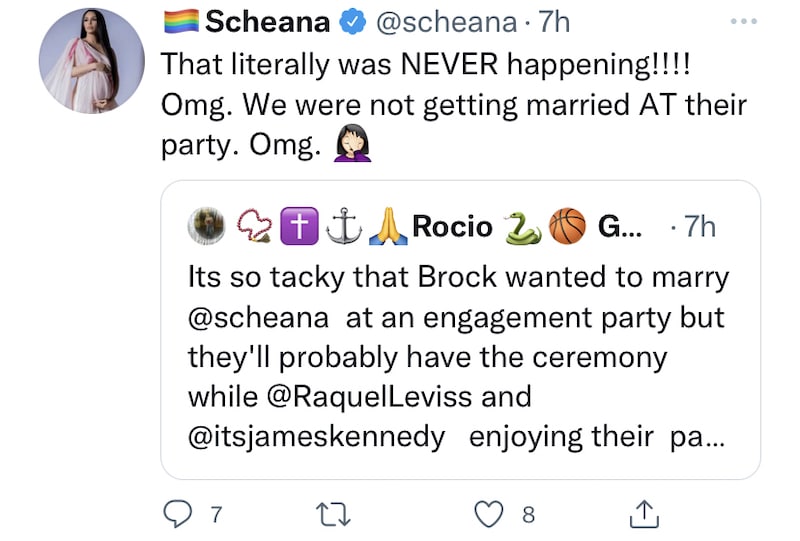 “It was NEVER happening at their party or on their property. He suggested sneaking away to Santa Barbara when everyone else was doing activities. How do you not understand that?” Scheana told another fan who said they felt “sick” about the idea that she and Brock would be piggybacking off James and Raquel’s event. 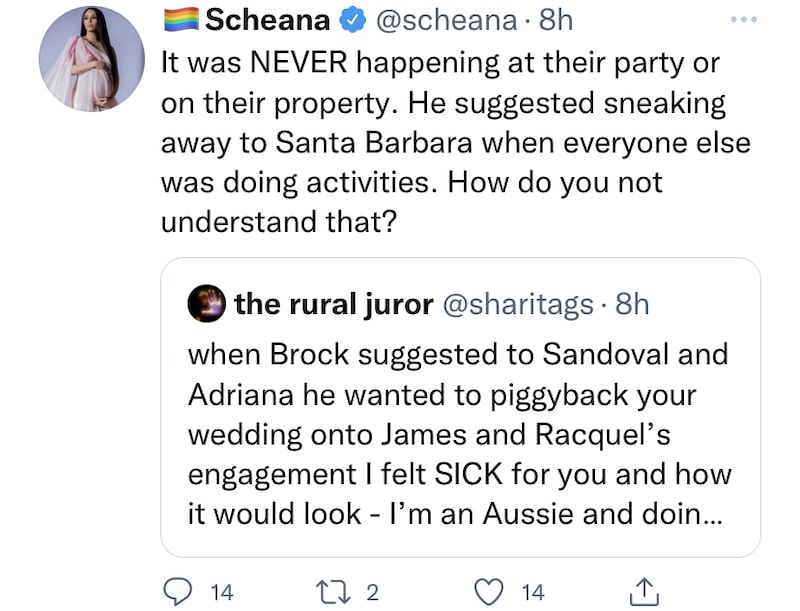 While Scheana did her best to make it crystal-clear to her online audience that she and Brock were not planning to get married at James and Raquel’s actual engagement party, a number of Twitter users were still dumbfounded by her and Brock’s lack of awareness regarding how a potential wedding could have impacted Raquel.

“This finale episode was cringeworthy… so much chaos. Why didn’t ANYONE think of sweet Raquel?” someone asked.

“Actually she was ALL I was thinking of and the reason I didn’t want to do anything,” Scheana insisted of her decision to forgo her and Brock’s initial plan. “I must have said 100 times I do not want to do anything to upset Raquel. Also, why we didn’t tell her we were engaged.” 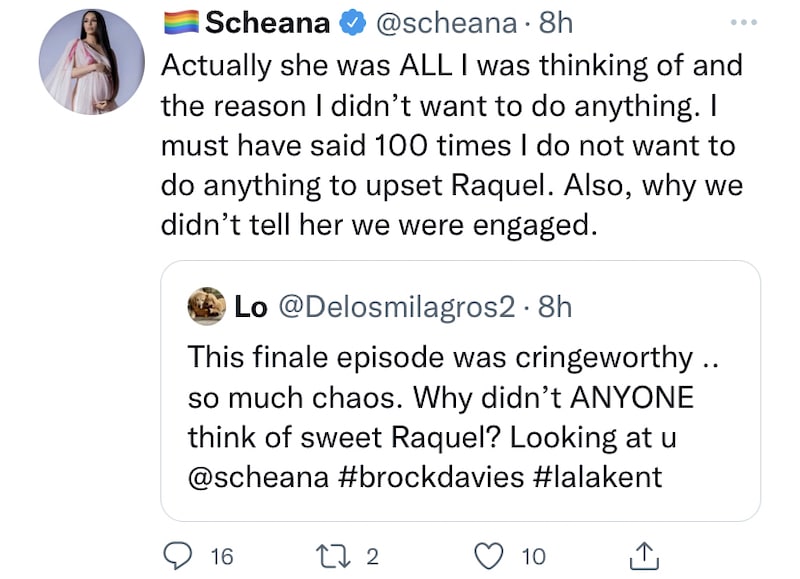 Then, after another person suggested that Scheana was in a rush to tie the knot because she wanted to ensure her wedding would be featured on the show, Scheana denied any such thing.

“I actually didn’t want it that way which is why it didn’t happen,” she replied.

In another post shared on Twitter, Scheana continued to deny that she wanted her wedding on film.

“I literally don’t give a f-ck if my second wedding is filmed or not [because] we are getting married for US,” she stated. “Brock really wanted to show his love for me this season and if you want to hear more, tune in to Scheananigans this week. Hope y’all enjoyed the season!”