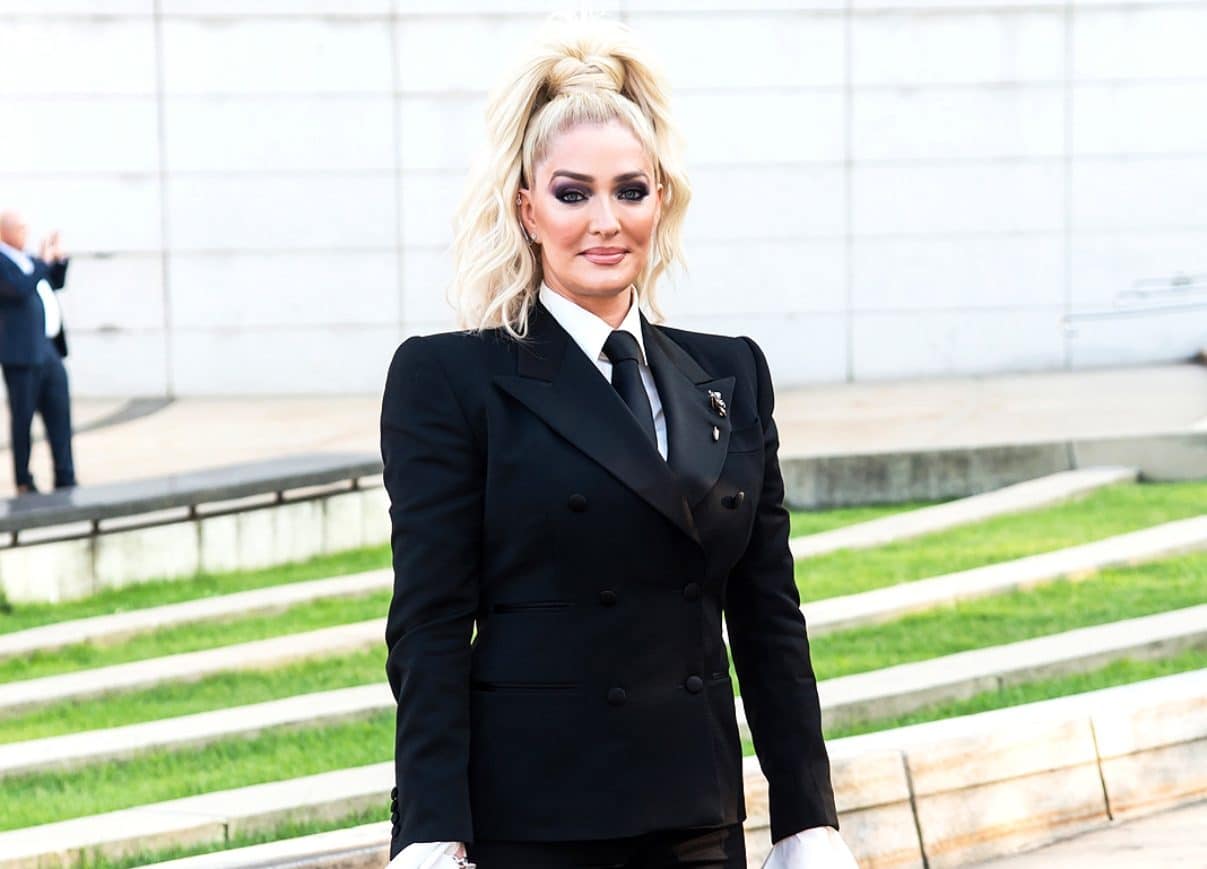 Erika Jayne‘s company, EJ Global, has been suspended by the Franchise Tax Board (FTB) in California.

Months after the filing of a $25 million lawsuit, which accused the Real Housewives of Beverly Hills cast member of receiving fraudulent transfers from her estranged husband Thomas Girardi‘s now-defunct law firm, Girardi Keese, attorney Ronald Richards is suggesting that the company was actually used for “improper reasons.”

“Breaking EJ Global LLC has been suspended by the Franchise Tax Board according to [Ronald Richards]. Documents will be in insta story,” Bravo Snark Side announced in a post shared on February 5.

According to Ronald’s post, which was also shared on Instagram, Erika’s attorney “signed her corporate documents under penalty of perjury” at the end of last month when he updated her company’s corporate records.

“This is the entity that received over $25,000,000 from her husband’s former law firm. Erika owns 100% of this entity. It was filed on her joint tax returns with Tom for many years. This is the entity that the California Franchise Tax Board (FTB) has declared was not really a business for profit but was simply a business where they improperly used it for what are called lifestyle expenses which in turn gave Erika and Tom improper tax deductions on their joint tax return,” Ronald explained. “EG signed all of her tax returns with Tom & has publicly said she read her tax returns. She was also represented by counsel at the FTB Tax Audit.”

Ronald went on to say that EJ Global was listed as a defendant in numerous lawsuits before being suspended by the Franchise Tax Board for reportedly failing to comply with tax code, and he noted that he believes the RHOBH cast member was advised against filing a tax return so that the company would potentially be able to evade the $25 million case.

“The failure to file has caused her company to get suspended. The only other reason would be if she didn’t pay the corporate taxes-but that is a small number for an LLC. She wants to avoid filing a tax return as she would have to acknowledge liabilities for the LLC & her attorney probably calculated it is better to not file a return,” Ronald shared. “However, the delay of doing so has now caught up with her as the FTB has suspended her company.”

Not only is EJ Global now suspended, but Erika’s attorney could also be facing legal ramifications of his own, according to Ronald.

“A violation of Revenue and Tax Code 19719 is a misdemeanor under CA law. Furthermore, an attorney who knowingly represents a suspended corporation and conceals this fact from the court may be subject to sanctions. By representing EJG in court and signing corporate documents, her attorney is doing just that, exercising rights of a suspended company. Erika’s attorney, if he continues after this information is published, is committing a misdemeanor,” Ronald alleged. “Her attorney also has a conflict of interest as he has personally signed her corporate documents. He is now a witness to her corporate affairs. This is now a huge problem [for] her [and it’s] important that everyone knows so neither can claim ignorance.” 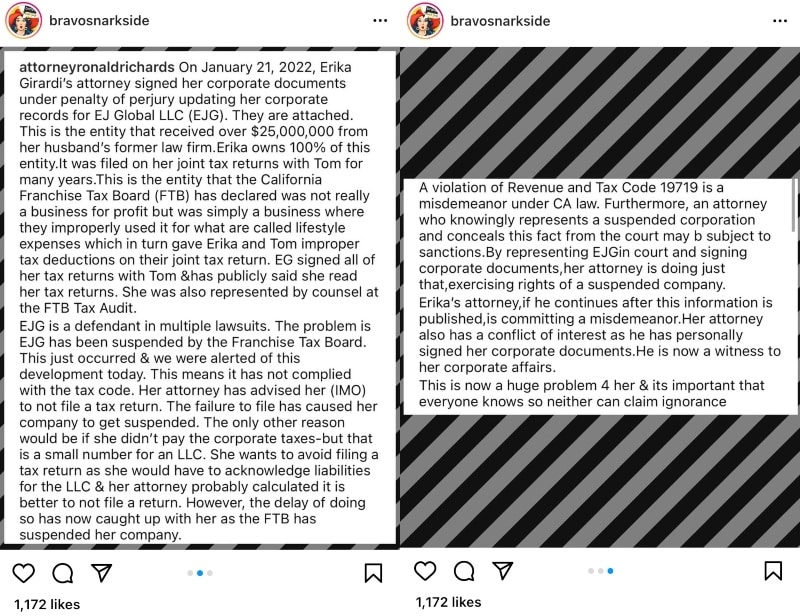 Ronald also addressed the issue on Twitter after sharing a court document.

“Here are pages from EJ Global’s & Erika Girardi’s answer to the $25M complaint for $. EJ Global is a critical deft. They take the position any debt is owed by them, not Erika. Of course, Erika’s atty represents both EJ & Erika. Problem is, EJG is suspended & atty is conflicted,” he wrote.

Then, after a Twitter user questioned him about what would happen to the lawsuits now that the company is suspended, Ronald said, “Their answers will get stricken unless they fix this.” 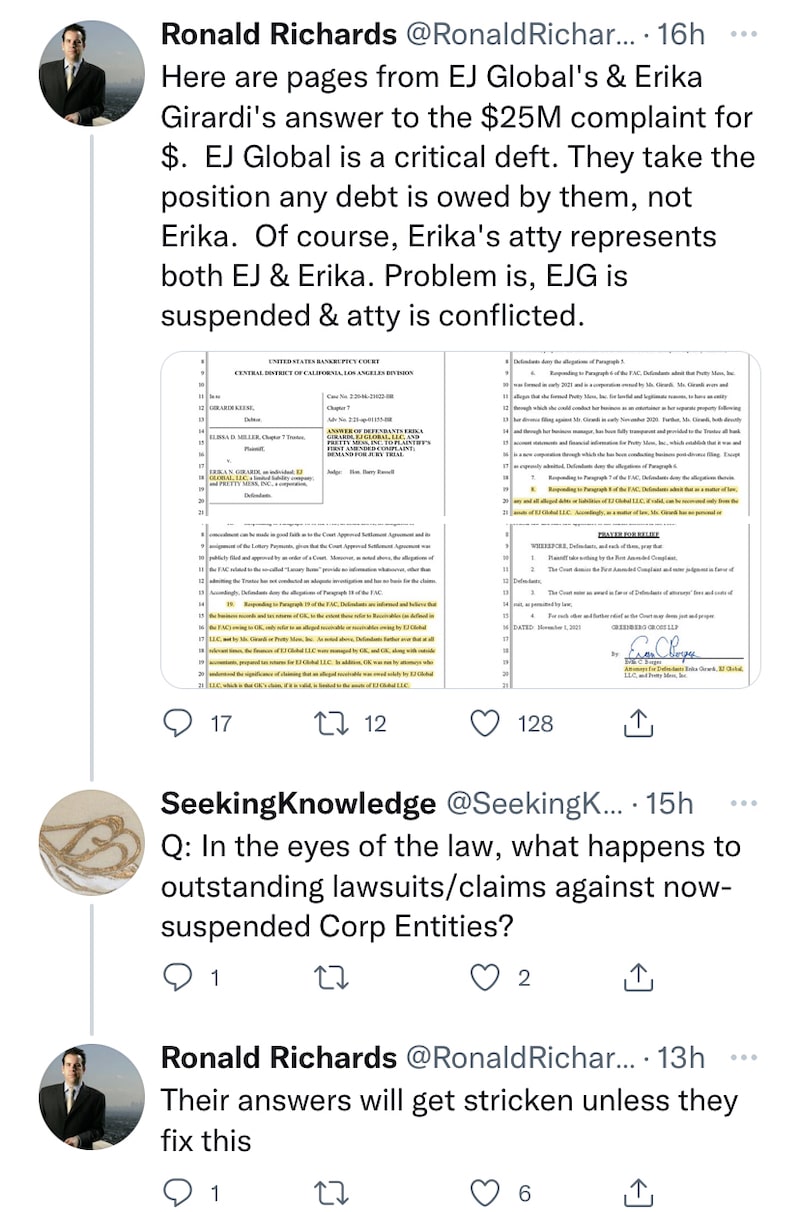 In a second tweet, Ronald suggested that EJ Global was nothing more than a vehicle used to make “improper tax deductions.”

“It was a vehicle used to take improper tax deductions,” he alleged. “It’s now being used to shield liability but it can’t be suspended and appear in court.” 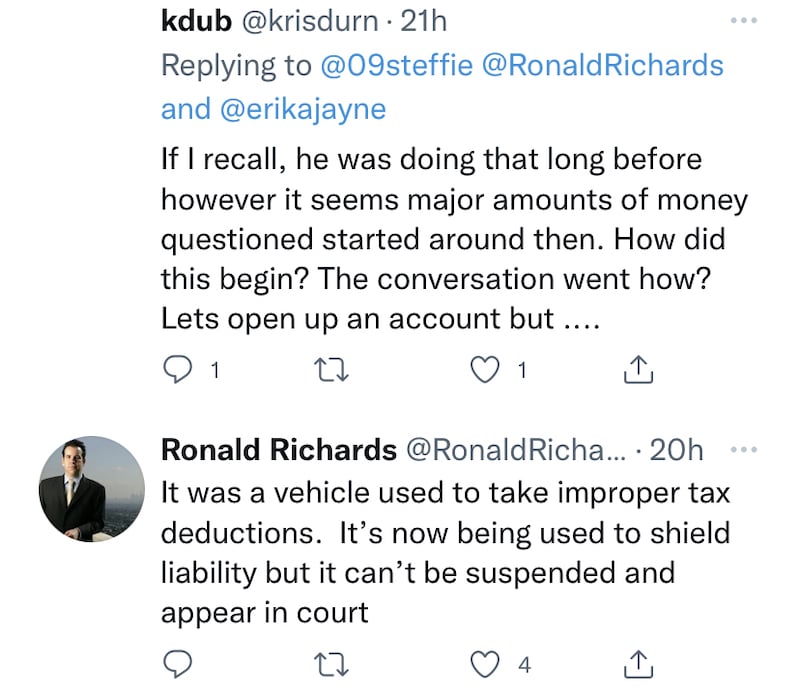 The Real Housewives of Beverly Hills season 12 is expected to wrap production later this month and air sometime this spring or summer on Bravo.