Home Real Housewives of Orange County News Tamra Judge Shares New Update With Heather Dubrow After Accusing Her of Blocking RHOC Return, Worried About Not Being Able to Return to Show

Tamra Judge Shares New Update With Heather Dubrow After Accusing Her of Blocking RHOC Return, Worried About Not Being Able to Return to Show 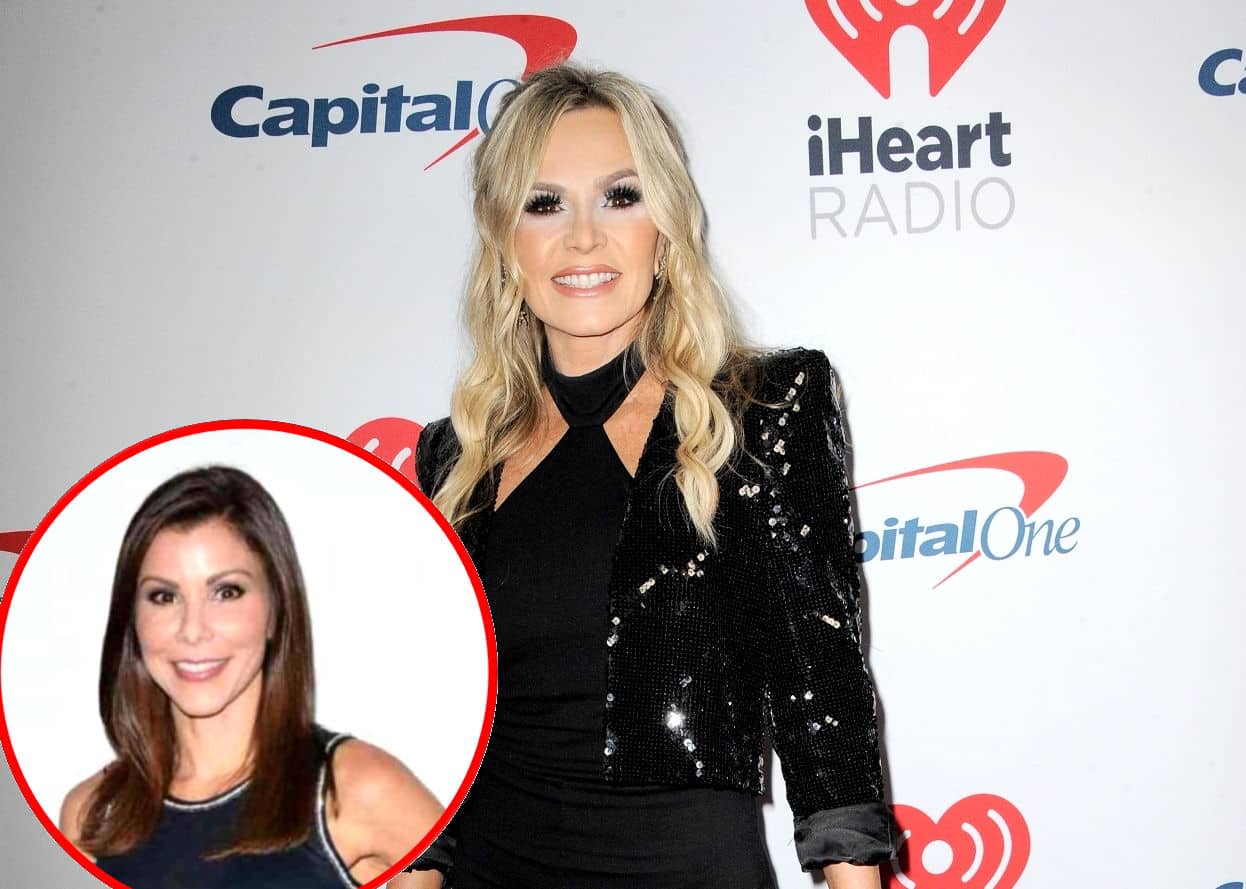 Tamra Judge is making it clear that she and Heather Dubrow are on good terms despite comments she made about her former Real Housewives of Orange County castmate on Jeff Lewis Live earlier this week.

After suggesting Heather was blocking her potential return to RHOC and saying she fed Andy Cohen a line about Tamra’s podcast, Two T’s in a Pod, giving a behind-the-scenes look at the Real Housewives, Tamra took to social media to show just how close she and Heather actually are.

“Thanks [Heather Dubrow] for sending me these amazing pictures. Such good memories,” Tamra captioned a June 15 collage of photos shared to her Twitter page, confirming the two of them are in touch. 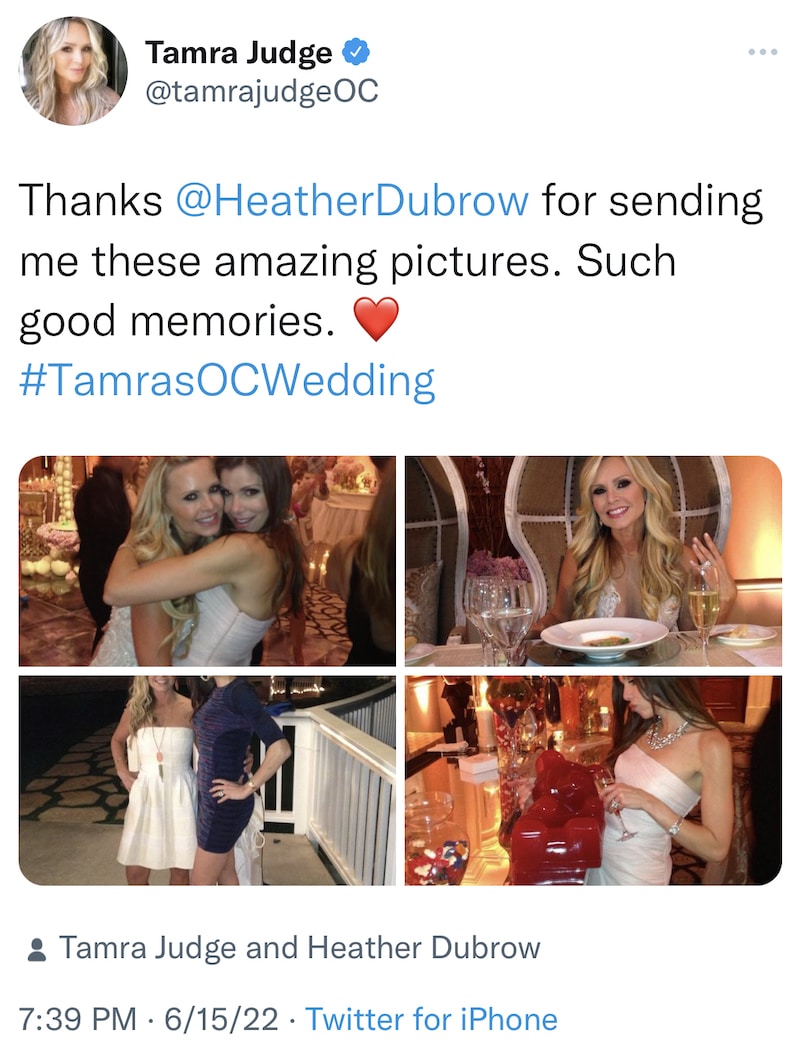 But after sharing the post, Tamra was bombarded by fans who questioned the civility between them.

“After you trashed her on Jeff Lewis Live yesterday?” a fan asked.

“Did I trash her? Maybe you should go take another listen,” Tamra replied.

“Huh? You just said you two aren’t friends and that you are just friendly,” wrote another.

“We are friends!” Tamra confirmed. “After she left the show, we remained friendly but rarely saw each other. That’s what I meant. I never said we weren’t friends.” 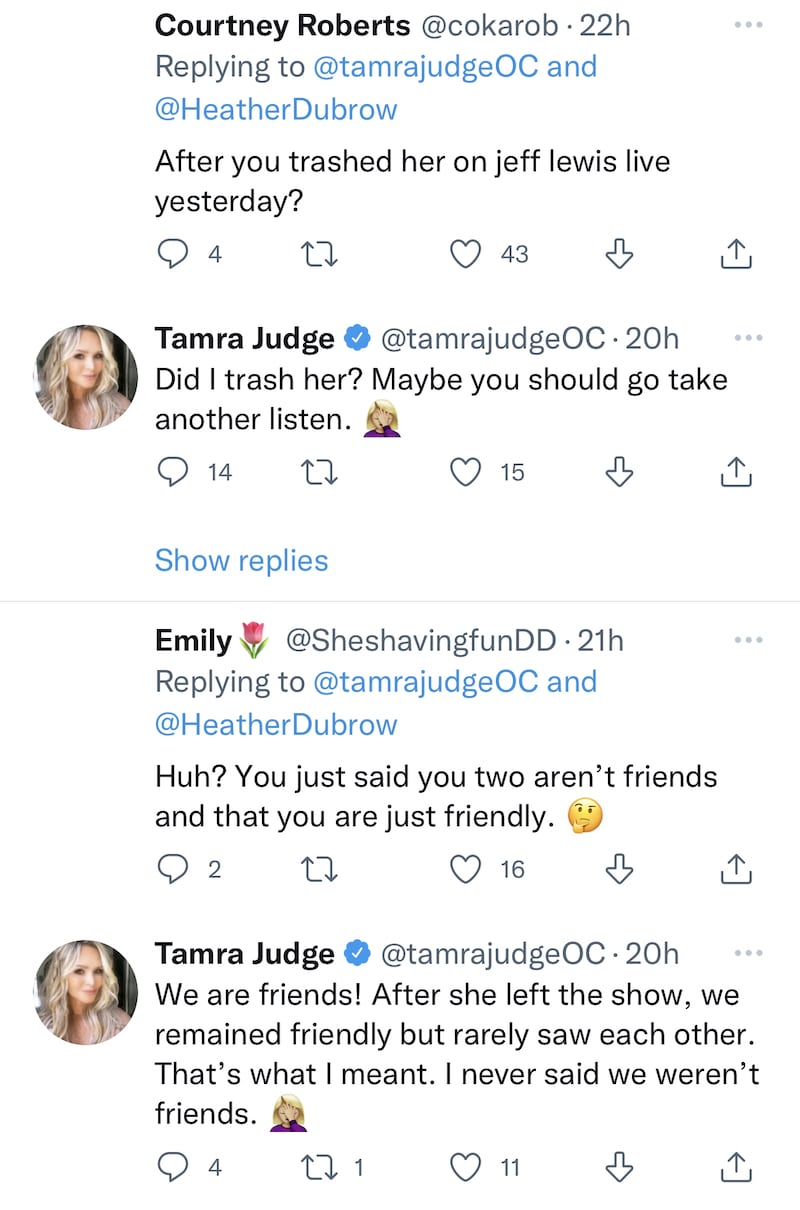 Another person said, “I’m so confused didn’t you hate her yesterday?”

“Actually, I never hated her. At all. Far from that. I was hurt and confused. Big difference,” Tamra explained. 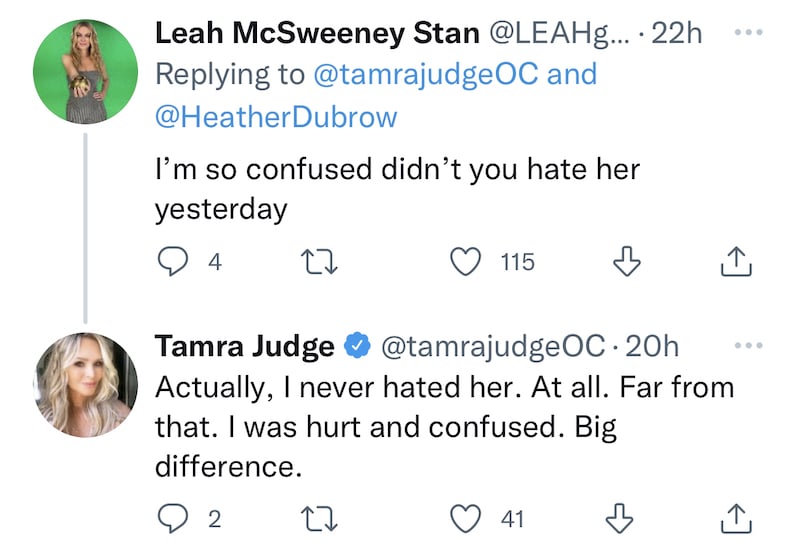 After defending her relationship with Heather and the things she said about her on Jeff Lewis‘ radio show, Tamra admitted on her own podcast that Kelly Dodd‘s call into the show was “uncomfortable.”

“We have a special caller and it’s Kelly Dodd,” Tamra recalled to co-host Teddi Mellencamp, via Showbiz Cheat Sheet.

During the radio show, Kelly had said that Thomas Kelly, a former executive producer of RHOC, told her he was pushed by both Heather and her husband, Terry Dubrow, amid production on season 16.

“And I’m looking at Jeff like, ‘You really don’t want me to ever come back to Bravo, do you?’ And Kelly went in hard. ‘Tamra’s being politically correct.’ And Kelly just went off,” Tamra said, noting that while she wasn’t blindsided, she did want to disappear.

“I cannot participate in this conversation,” she said. “I did not want to engage. I felt totally uncomfortable all the time looking at Jeff. Like, ‘Jeff, you never want me to go back to the show.’ He’s like, ‘You didn’t say anything.’ And I said, ‘Just participating in this conversation is not a good look’ … There was a moment where I just was sitting and I go, ‘Andy if you’re listening, I’m not behind this [laughs].'”

Although it is unclear whether or not filming has begun on the upcoming 17th season of The Real Housewives of Orange County, Heather seemingly confirmed she and Shannon Beador were returning when she shared a photo of the two of them on her Instagram Story last month, along with the caption, “Here we goooooooo.”