RHOBH’s Lisa Rinna Claps Back at Fan Accusing Her of Ruining “Every Dinner Party,” Thanks Sutton for Being “Understanding” of Grief Before Deleting Post

Lisa Rinna clapped back at a Real Housewives of Beverly Hills viewer on Instagram, who accused her of ruining “every dinner party” following her dramatic meltdown on Wednesday’s episode.

After sharing a meme of herself for “Throwback Thursday,” which asked, “Why am I here? I’m more fabulous than this,” Lisa, who has struggled to deal with the grief she experienced after the loss of her mother, Lois Rinna, in November 2021, was met with a fan who called her out for her behavior on the show.

“So fabulous that you ruin every dinner party you attend because YOU CANNOT LET IT GO!!” the person wrote to Lisa in a comment to her post.

And Lisa didn’t hesitate to respond to the allegations, sarcastically asking, “That would be real exciting huh?” She then suggested that the fan wouldn’t be happy either way.

“And [by the way] you’d never be happy with anything so go away now,” she told them. 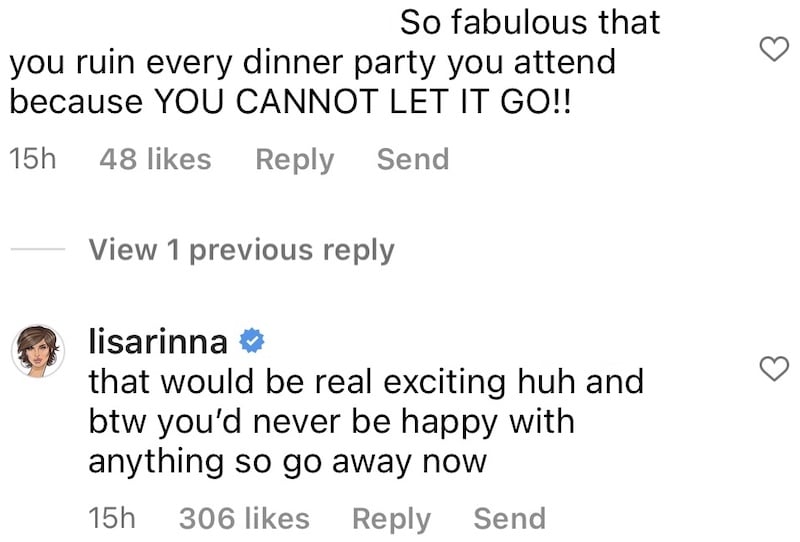 Also on her social media page, Lisa shared a message of thanks to co-star Sutton Stracke, who she berated on last week’s episode of RHOBH, which featured the launch of her wine line, Rinna Rosé.

After reading that a fan page had applauded Sutton for having compassion for Lisa as she struggled to cope with the loss of her mom, Lisa wrote, “Thank you [Sutton Stracke].”

“Even Sutton understands that Lisa has been grieving the loss of her mom, it’s really nice to see the women rallying around her and being understanding of her situation,” the fan page had said.

And in an accompanying video, which featured an August 2 interview with Entertainment Tonight, Sutton said Lisa was grieving and dealing with “ebbs and flows” amid season 12. 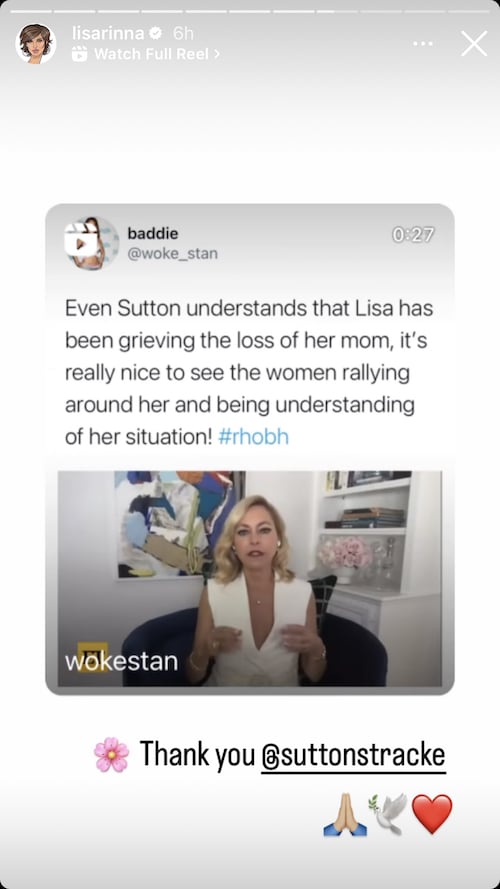 But after sharing the message of thanks to her co-star, Lisa seemed to have a change of heart as she mysteriously deleted the post.

Prior to Wednesday’s show, Lisa warned her fans and followers of her then-impending emotional breakdown.

“Next week I have an absolute and utter breakdown on camera,” Lisa confessed. “I am apprehensive because I am very vulnerable. Grief is so hard.”