Jennifer Aydin Addresses Physical Altercation With Joe and Melissa Gorga, Says She Threw Drink After Feeling “Threatened” by RHONJ Couple as Joe is Seen Calling Her a “Dirty B-tch” in New Footage 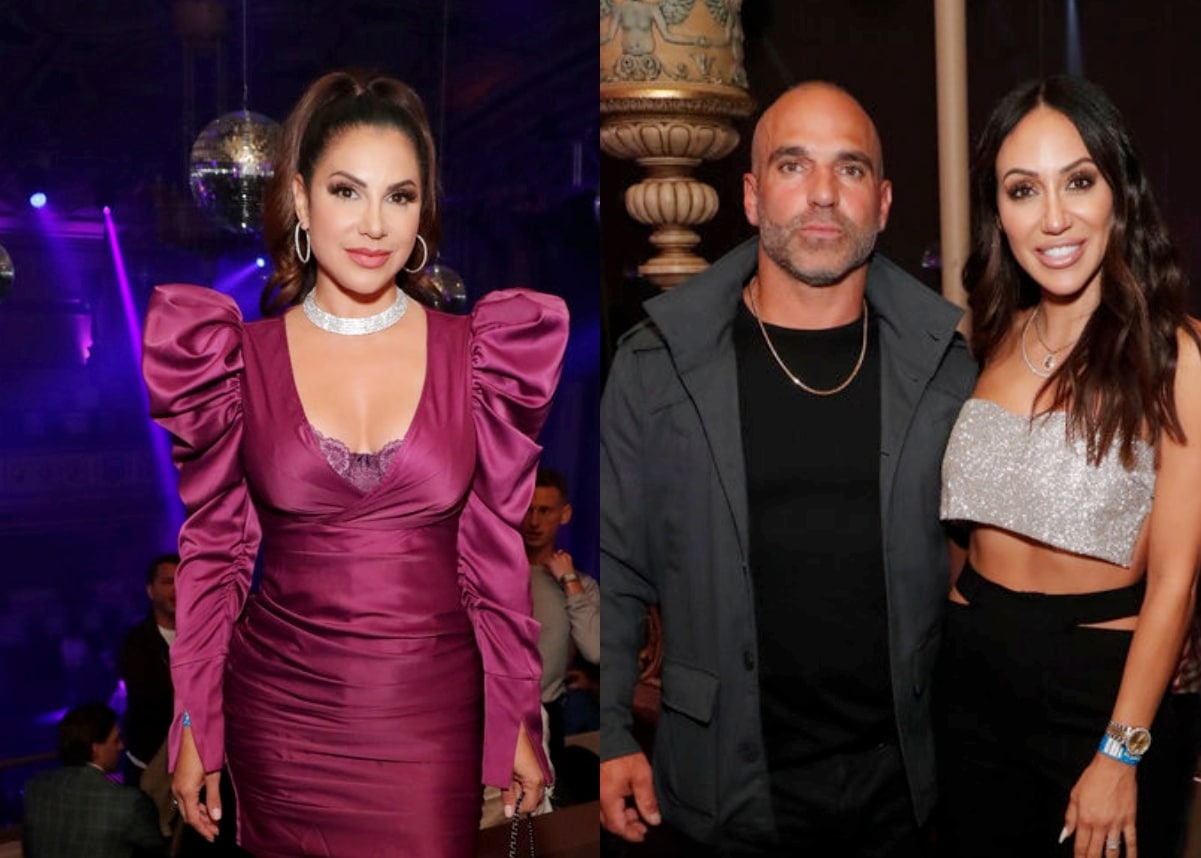 Jennifer Aydin is telling her side of the story after it was revealed that she threw a drink amid an early morning verbal spat with Joe and Melissa Gorga on Sunday at BravoCon.

After reports of a dispute in the lobby of the Gansevoort Hotel were shared online, as well as a clip of Jennifer throwing her drink and tossing her cup, the Real Housewives of New Jersey cast member shared a lengthy statement on her Instagram Story, explaining what took place between her and the Gorgas.

“Ok- so I walk into the hotel with my assistant. We were coming from the BravoCon after-party. Bill didn’t come in with me because he was so tired he was sleeping in the room,” Jennifer began on October 17, as seen in screenshots shared by All About the Real Housewives on Instagram. “I noticed that Joe and Melissa were in the lobby with a bunch of people. I walked in, the second our eyes locked, I looked away.”

According to Jennifer, she was simply “minding [her] own business” as she walked to the elevators to retreat to her room with her assistant, Erica.

“I press the button for the elevator. As the elevator opens, Melissa yells out ‘Loser!’ I told her to ‘shut the f-ck up.’ She then called me a [wannabe]. I looked at her and said very calmly, ‘Don’t start one, won’t be none.’ Then Joe Gorga yells, ‘Suck a duck, b-tch,'” Jennifer shared, admitting that she didn’t hear Joe utter those words, but rather was informed of such by her assistant.

“So I told him to shut the f-ck up. Then, their talent guy that’s always with them, Tom Minion, he comes toward me and said, ‘You’re low class and trash.’ I then told him, ‘Get the f-ck away from me! Stay back!’ And when he didn’t, I chucked my drink, which was water with melted ice, by the way, in his face and threw my plastic cup,” Jennifer continued.

Jennifer went on to reveal that Melissa and Joe had been “spewing curse words and derogatory things” toward her, which she believes never would have happened if she weren’t without husband Bill Aydin.

“I was alone, I was vulnerable, and he took [advantage] of that. I know if I was with Bill she wouldn’t have opened her mouth or said a f-cking word. I felt threatened and attacked and I defended myself,” Jennifer explained. “My adrenaline had me shaking through the roof. I have some footage of Joe cursing me out that I’m working with to get my story out there. It’ll be out by tonight.” 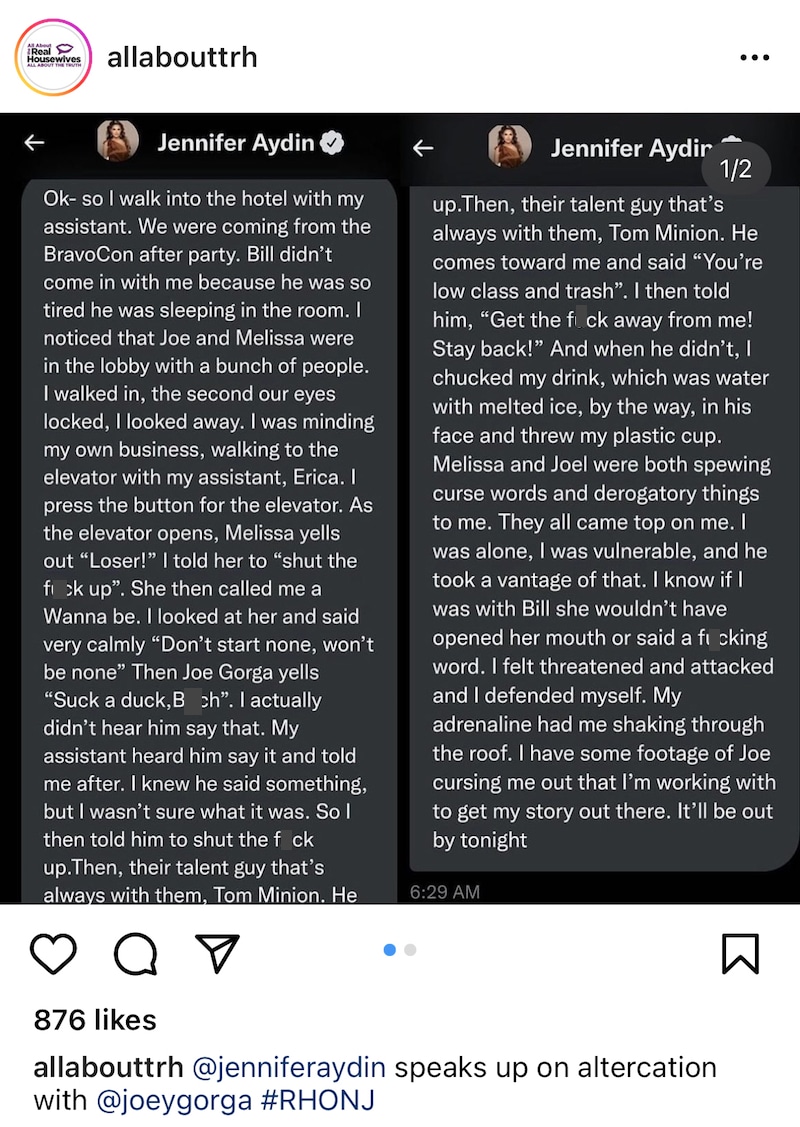 In another Instagram Story, Jennifer denied throwing a “full beverage” at Joe.

“Here’s a screenshot of my ‘full beverage’ which was water, [by the way], that was not thrown at [Joe Gorga],” she wrote. 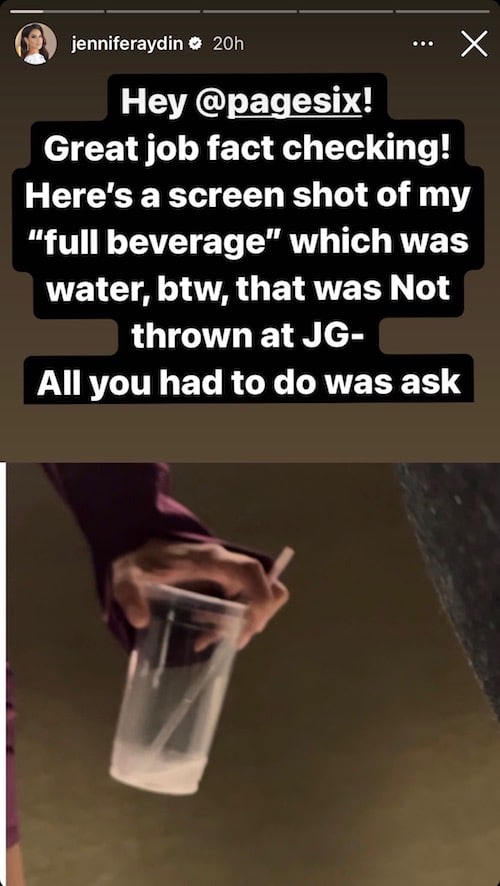 Meanwhile, in the additional video shared of Jennifer’s encounter with Joe and Melissa, Joe was heard yelling, “Shut the f-ck up, you dirty b-tch,” in her direction.

Then, in response, Jennifer fired back with a series of profanities.

Amid the dispute, Frank Catania stepped in, attempting to calm Jennifer down.

But Jennifer wasn’t quite done, yelling a final, “F-ck that little Neapolitan piece of sh-t!”