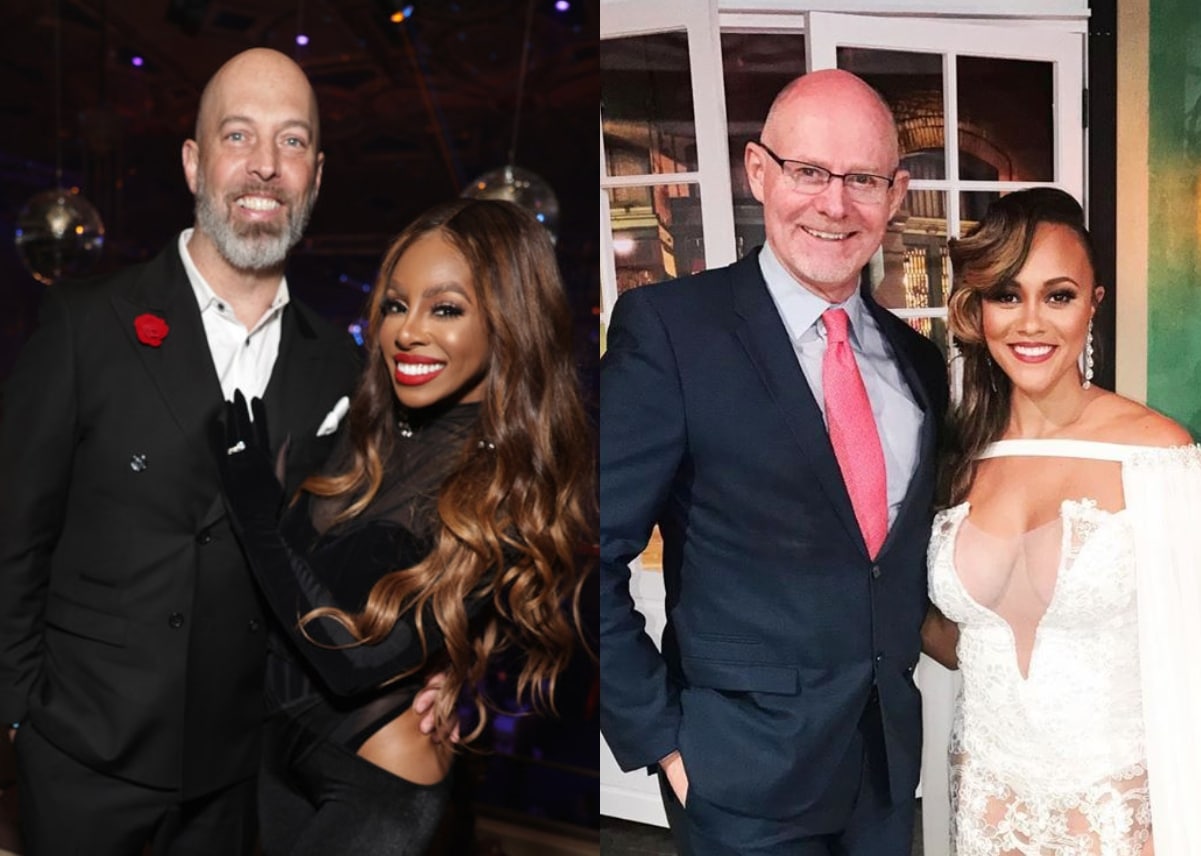 Chris Bassett reacted to Michael Darby being spotted at the Bahamas resort where his wife, Candiace Dillard-Bassett, was performing in a tweet shared on Sunday night.

After the Real Housewives of Potomac cast member performed at the SLS Baha Mar’s Skybar in Nassau, where Michael was photographed at the bar with a mystery woman, Chris took to his Twitter page to shade his ex-castmate while also addressing Michael and Ashley Darby‘s ongoing divorce and the lies Gizelle Bryant reportedly told about Ashley’s friend.

“I really can’t believe Michael Darby came to [Candiace Dillard-Bassett’s] concert just to talk about Ashley and be messy. It’s giving desperate,” a Twitter user wrote in the caption of a November 20 photo of Michael talking to a long-haired woman and drinking a beer.

“Damn man… We can’t go nowhere… And this bama f-ckin sh-t up,” Chris wrote in response. 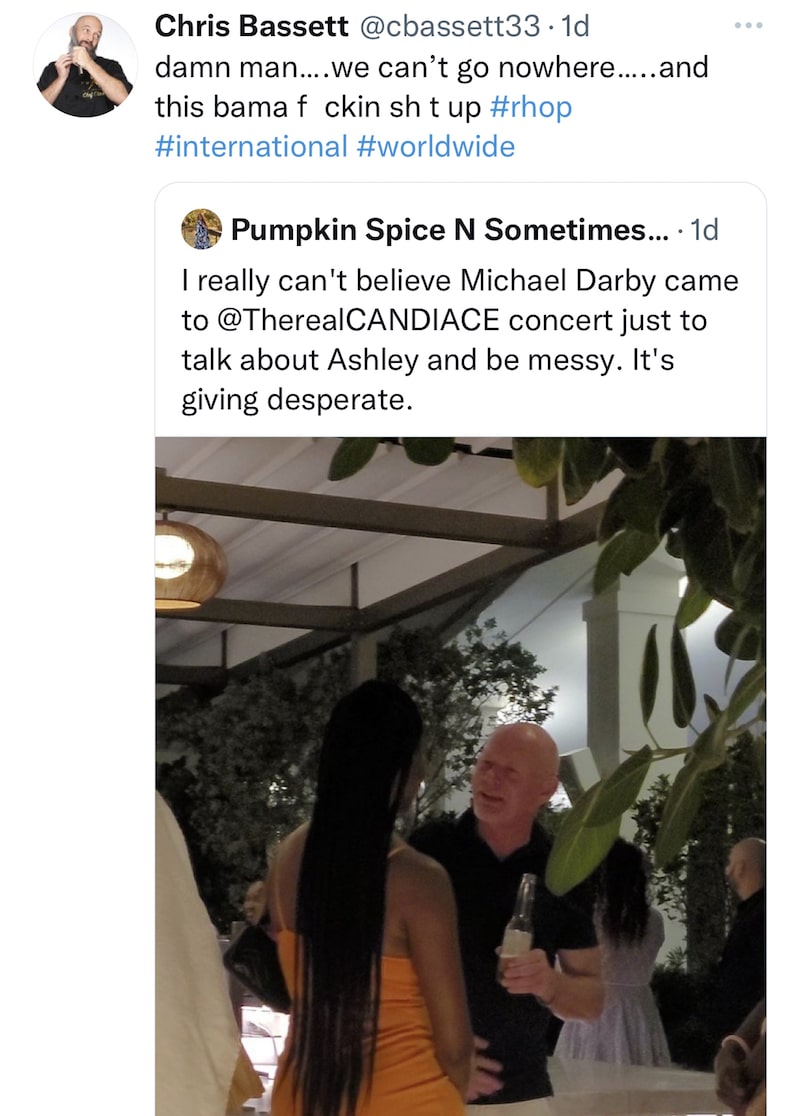 “Wowww that’s a crazy coincidence, or maybe not,” Eddie Osefo said after seeing the tweet and photo himself.

“lol… I have no idea,” Chris admitted. “Apparently he comes here a lot… And this was the resorts 5 year anniversary.” 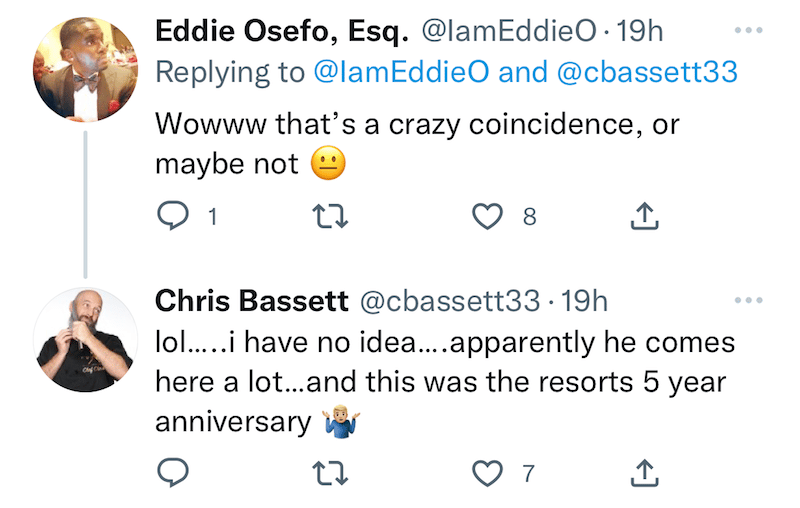 Then, when another person suggested Chris was blaming Ashley for Michael being present at the club, Chris denied any such thing, explaining that the two of them simply found themselves at the same resort.

“No f-cking way are you putting this on Ashley,” the person had written.

“What does she have to do with any of this?” Chris wondered. “Candiace was performing in the bahamas….he happened to be at the same resort.” 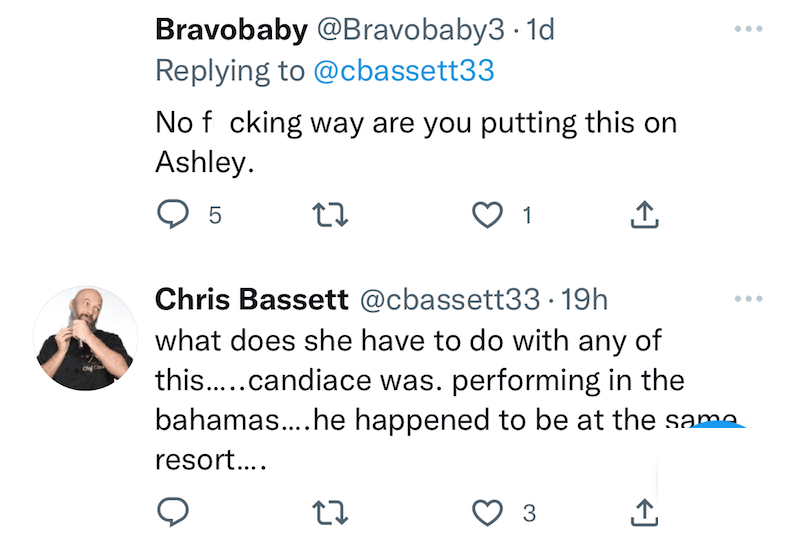 Someone else admitted that when it comes to Michael and Ashley’s split, they were surprised to see them break up since they are so similar.

“I’m surprised he and [Ashley Darby] are divorcing as they are the same. Or maybe that’s why! Let people live their lives. The Bassetts do not trouble anyone who does not trouble them!” they stated.

And Chris responded by saying, “Facts.” 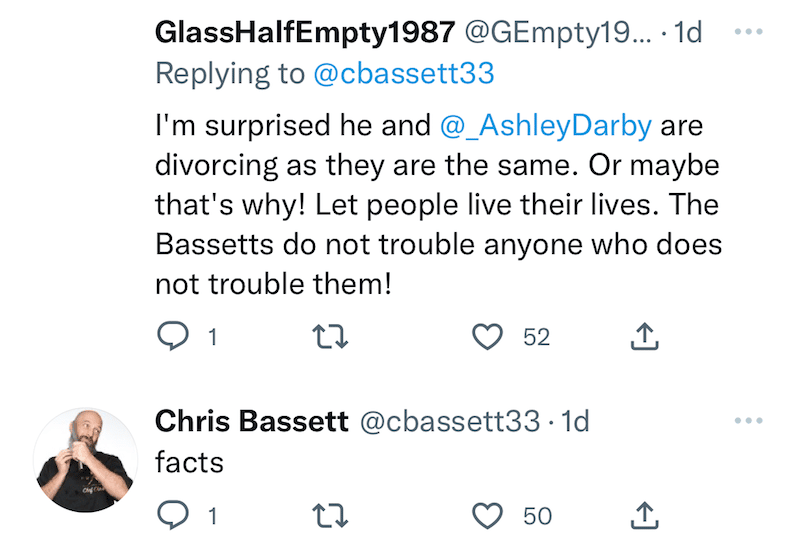 Although Chris didn’t reveal exactly what went down between him and Michael at the resort, he confirmed that he “paid him dust.”

“What a random thing to happen. I hope y’all paid him dust!” a woman wrote in a tweet.

“And did,” Chris replied.

“So are we bypassing Gizelle lying on [Chris Bassett] and saying he touching Ashley friends butt?! Cause y’all not asking the right questions for me,” the message read.