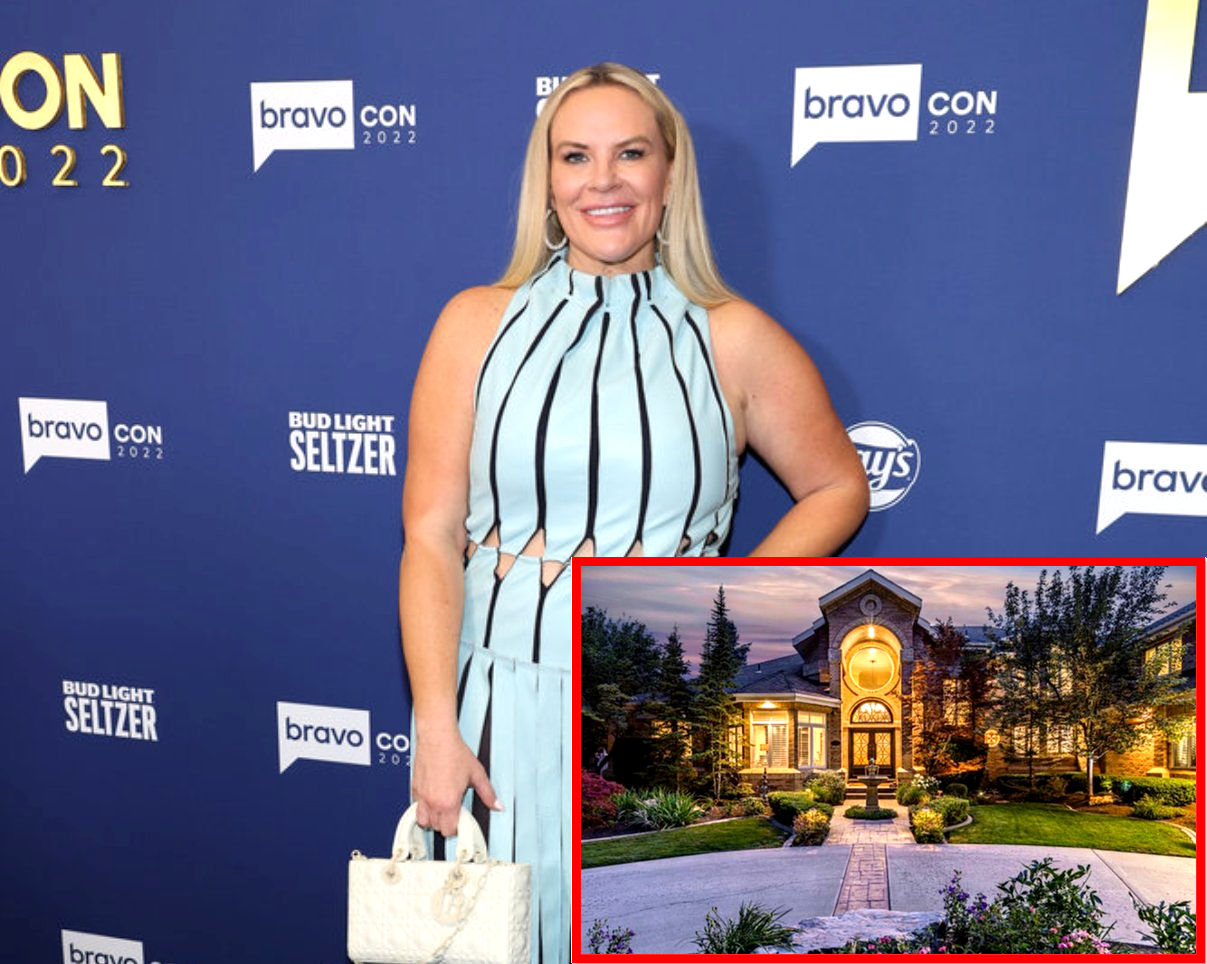 After wrapping production on the recently-aired third season of The Real Housewives of Salt Lake City, Heather purchased a six-bedroom, six-bathroom, 7,922-square-foot property for her family, which boasts a wine cellar and plenty of entertaining space, both indoors and out. 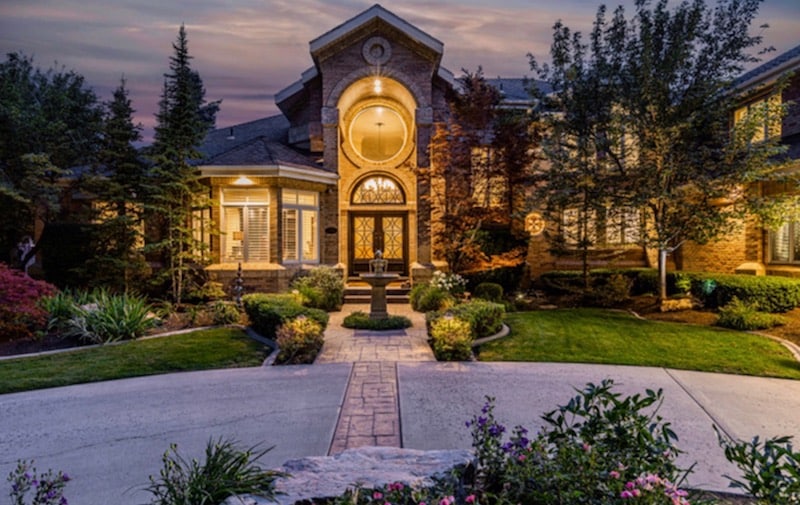 “Take a look at Heather Gay’s new $2.89 million dollar house! At 7,922 square feet, the new pad has 6 bedrooms and 6 bathrooms, a temperature controlled wine cellar, and an outdoor kitchen for entertaining plus a salt water pool!” the RHOSLC fan page HousewivesofSLC announced to their fans and followers on Instagram on January 18. They also shared a series of photos of the property.

According to the listing, Heather’s new home has a grand entryway with custom iron doors and large windows with remote-controlled blinds. 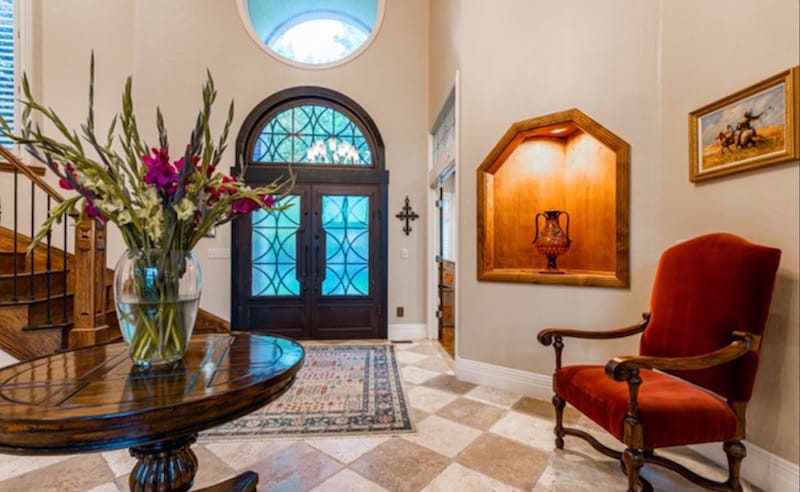 A formal living room is also two stories with large, floor-to-ceiling windows and a stunning fireplace. 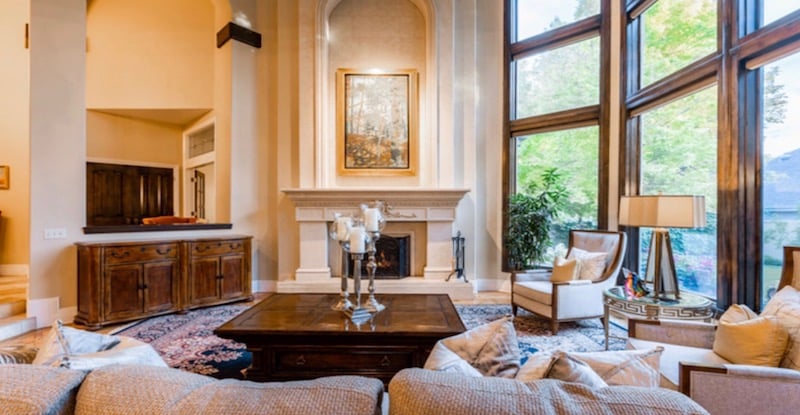 The living room is draped with large beams and ornate trim.

Just off the living room is a gourmet kitchen, which has been outfitted with top-of-the-line equipment from brands like WOLF, Subzero, Asko, and Brizo. 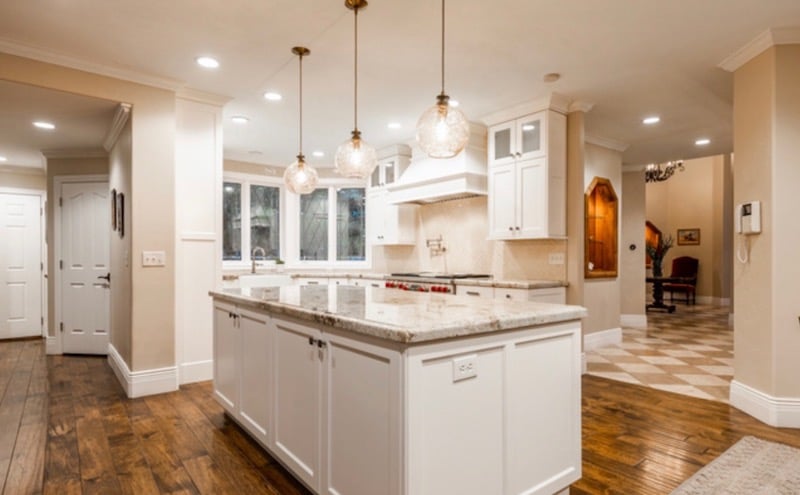 Three hanging lights are featured above a large island.

Also off the living room is a dining room with a wood-lined tray ceiling. 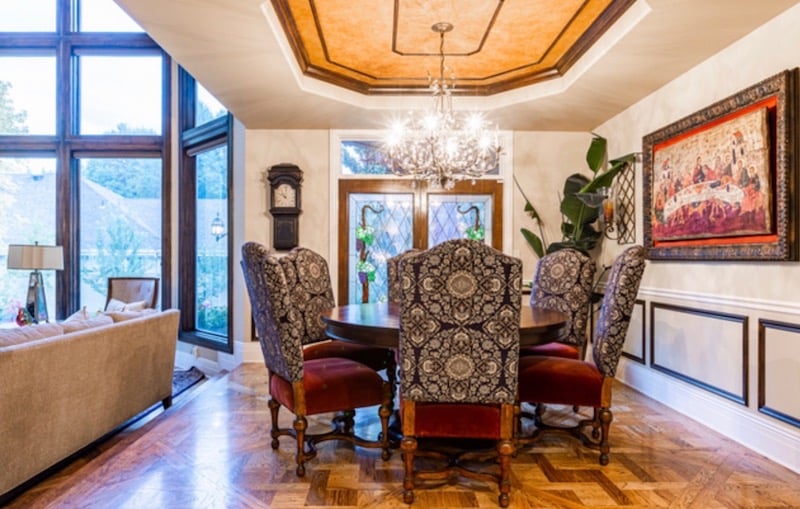 A large chandelier hangs above the dining room table.

The master suite of the home is located on the main floor as well, and it boasts its own fireplace, two walk-in closets, and even a custom steam shower. 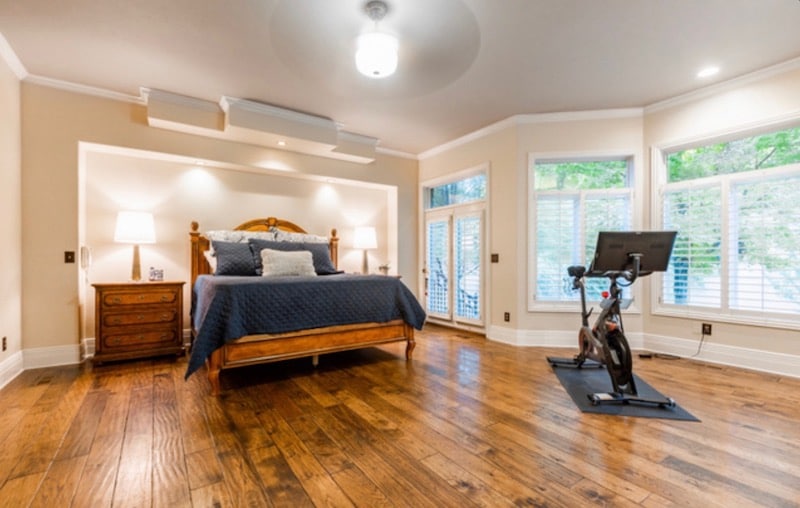 The master also features plenty of natural light with its many windows and French doors. 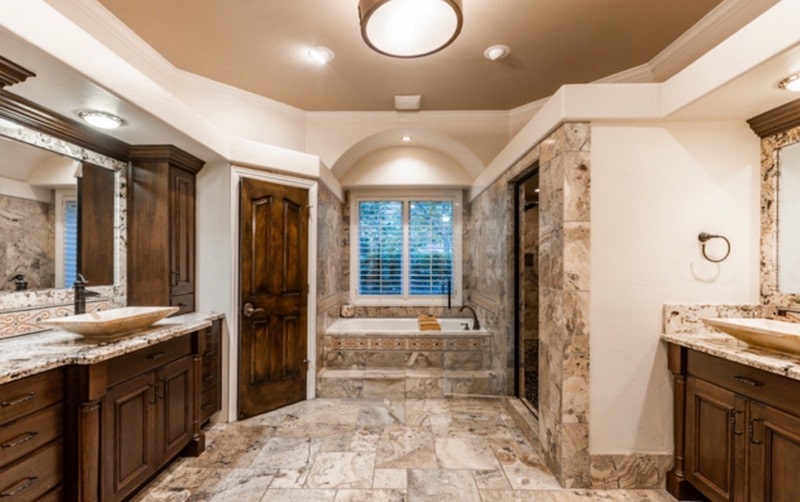 The master bathroom has a jetted tub surrounded with granite tiles.

Three more bedrooms, all with walk-in closets, are located in the carpeted upstairs. 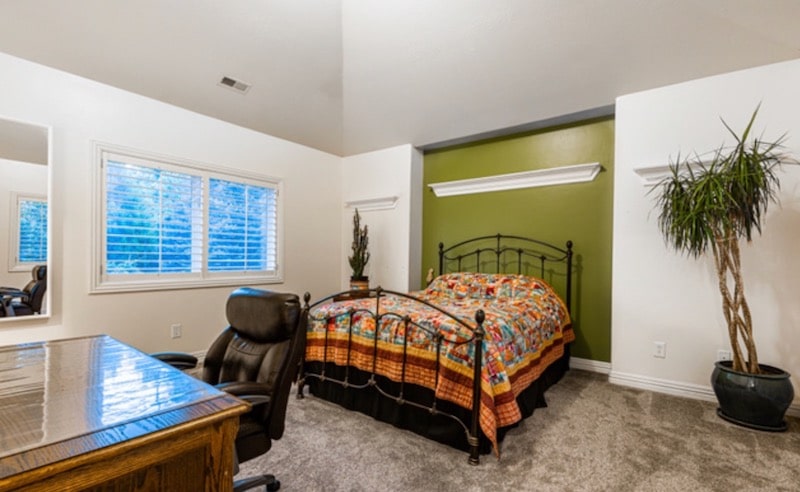 One bedroom features a cut-out wall with shelving.

Two of the upstairs bedrooms have their own bathrooms. 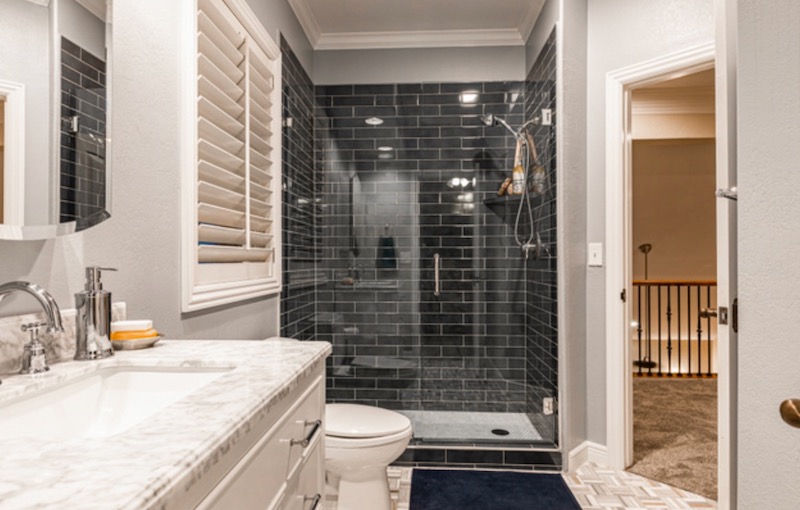 In the basement is a temperature-controlled wine cellar, along with a study with a fireplace, two more bedrooms, a gym, and a family room. 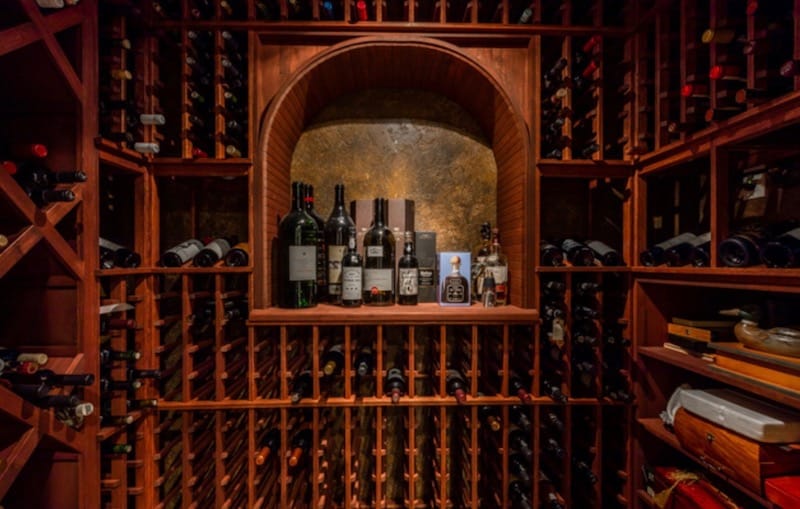 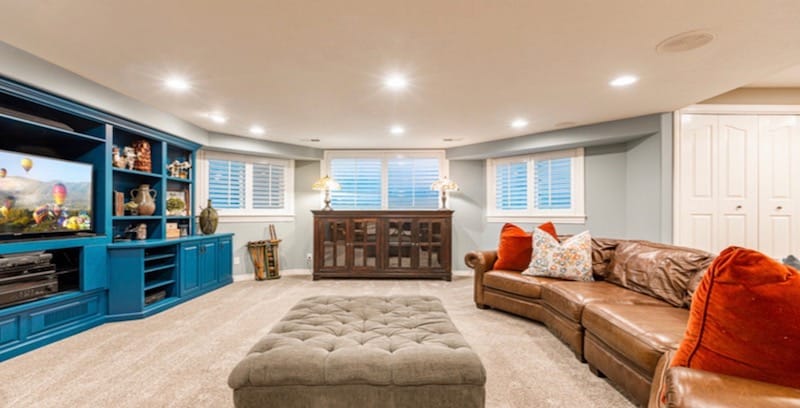 Outside of the home is a 12-foot-deep saltwater pool with a waterfall and kiddie pool. 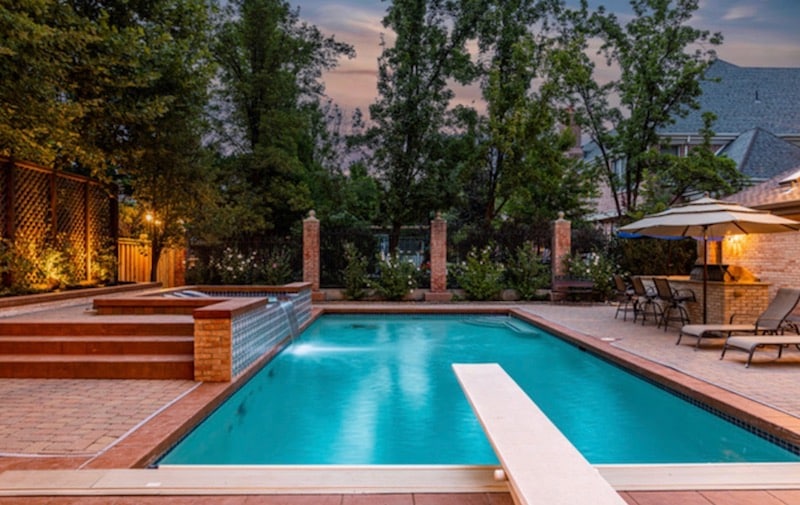 A diving board offers additional entertainment.

In addition to the home’s outdoor kitchen and spaces for seating, a pool bathroom, additional shower, and steam room can also be found outside. 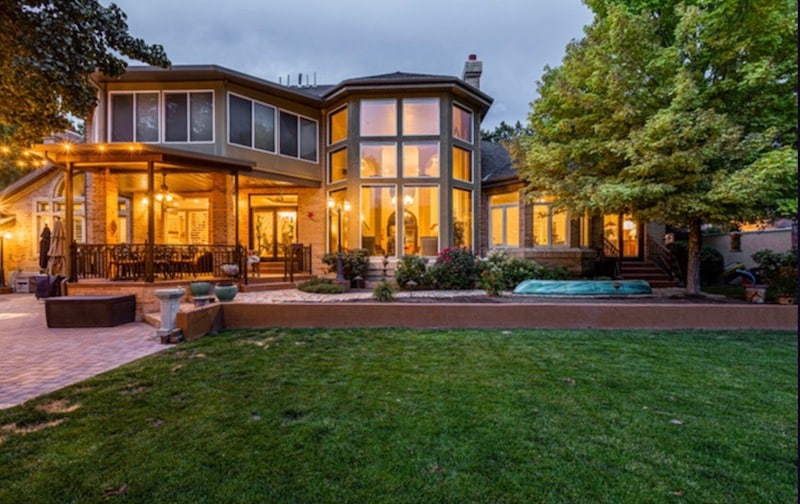 A shot of the backside of the home shows just how many windows it has.