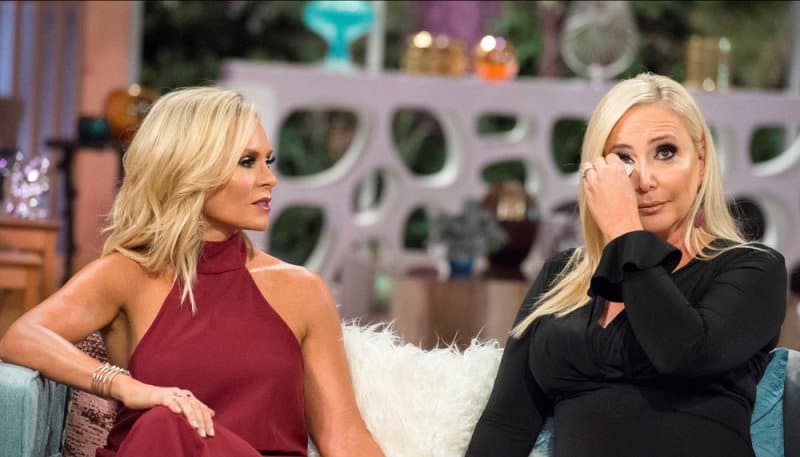 As Andy Cohen put it, let’s get “behind the orange curtain” and find out the inside scoop with these wild women of the Real Housewives of Orange County.

The reunion begins with an animated Andy greeting each and every one of these overly made up wild women. They all look like cheetahs hunting their prey- ready to pounce at any moment if the wrong question gets asked. We viewers get to take a quick walk down memory lane, which is chock full of ridiculously named events (anyone else momentarily forget about the “balls voyage” party?!) and other absurd scenarios, such as cross-dressing, English lessons, Shannon exercising, and of course, Vicki needing attention at her birthday party.

Andy doesn’t waste any time and dives right into the dirt. My man. We find out Shannon’s daughter Sophie passes her driver’s test and scores a BMW X3 (something tells me that’s David’s way of making sure he stays in the role of “the cool parent”), Peggy evidently plays dumb on purpose (I’m with you Meghan– the jig is up, Peggy. Everyone knows what a peanut gallery is!), and that I don’t know any well-known colloquialisms (bird in hand…??). Andy decides takes Vicki as his first victim. There is no sign of Vicki “whooping it up” since she is still ring less and not hitched to “Boring Steve”- Vicki’s words, not mine.

Can we all just agree to fast-forward through the Lydia segment?! I say we 86 her and put her mom on the show instead. I’d love to see a perpetually stoned grandma prance around with a crown and sprinkle glitter all day long. Besides, I am still getting over the nightmares I had of Lydia dressed as Charlie Chaplin. Lydia slams Shannon for calling her homophobic and Shannon denies any of this, but the proof is in the tweet, Shan. At least we know Lydia is mature…unfollowing Shannon and all. Bold move, Lydia, bold move. Lydia explains that her BFF is a lesbian so Shannon should stuff it.

Plus, she LOVES rainbows. Does anyone recall her tagline from the start of the show? “If you can’t take my sparkle, then stay off my RAINBOW.” COME ON. The women continue to press just how awkward she was at the drag queen event because she made THEM feel awkward. Lydia defends her behavior by explaining, “Drag queens are not in the Bible. Should I be ok with them?” Meghan then begins a small showdown with Lydia. Instead of Lydia saying, “You’re out to fight, Meghan” she states instead, “You’re coming out, Meghan.” Well, no, Lydia. The poor girl is SO confused about lesbians… All I know is that calling someone the mayor of crazy town does not sound very Biblical-cough, cough, Lydia. From that topic, we move onto Doug’s balls. Maybe another baby in the future for Lydia and Doug? A baby JUDY? YAAAAAS.

Kelly– the “comeback kid”- Dodd brought us a boob reduction and apologies this season and I kinda like her a little bit. We found out that the separation with Michael is legit and it seems like she just wants to be “banging like a screen door in a hurricane.” She even moved out of her big beach house and had to move into……..another big beach house. Kelly shares that she knew her marriage was over in Cabo (duh, she was probably loving that Cabo life) and it was questioned if Michael found out about the divorce via social media. Vicki shares that she is sad for her friend, but it seems to me she’s more sad that she will be losing couple friends since, let’s be honest, not many people wanna hang out with “Boring Steve.” We hear that Jolie is doing fine with the separation- she is probably already setting up Kelly’s new Bumble account. I kid. Tamra explains that Kelly is just misunderstood, a softie really, but when she gets mad, Kelly just goes for the “juggler”—translation- jugular: a sensitive vital part in the neck—NOT to be confused with a person in a circus. Minor details, though.

Tamra is looking more fit and fierce than ever and she is FIFTY. She is the hottest grandma I know and really holds her emotions together, but I do feel really bad about her relationship with Sidney. I felt like I was part of the family when Tamra got that invite to Sidney’s graduation, but the fact that she currently has no relationship with her again is heartbreaking. This is in part due to a Facebook post Sidney made in August blasting Tamra. Tamra blames herself for the failure, round II. Sidney doesn’t like to be talked about on the show, but…we continue to press this topic. Odd. In other news, Tamra got a facelift. She looks fabulous. The next step for her, you ask? Well, perhaps get her vagina tightened. Ya know. It’s good to have goals.

Shannon. Poor Shannon. She has learned the hard way that it is VERY easy to put the weight ON, but even harder to get it OFF. But, 25 pounds down does deserve an applause. Go girl! Shannon clarifies that she isn’t blaming Vicki for the weight gain, but that Vicki did start the ball rolling. The status of Shannon’s current situation is that her and David are no longer together. Thank goodness. That was the definition of a toxic relationship. Shannon has moved into her own place and to be honest, I think she will be in a much BETTER place without that beady-eyed creep. The girls live with Shannon full-time, because not even a BMW X3 can make him a good guy. Vicki needs to save those fake tears and go take a long walk off of a short pier. She is THE WORST. Vicki, you wouldn’t know they weren’t doing well because Shannon is not your friend because you told the WORLD that David is a wife beater. Shannon takes the high road and tells Vicki she is not responsible for this.

Shannon explains that when she said to David they had a couple good years, he responded with, “we had a couple good months.” Yikes. I mean, maybe Jolie can sign her up for a Bumble account… too soon? In the end, we should all be proud of Shannon for coming out with that hard to talk about news. Whatever your thoughts on Shannon are, we can all agree that we would love to see a spin-off show starring Kelly and Shannon. Two single girls, on the prowl, just looking for love. Can’t wait for part two of this reunion!

TELL US – WHAT ARE YOUR THOUGHTS ON THE RECAP & THE RHOC REUNION PART 1?