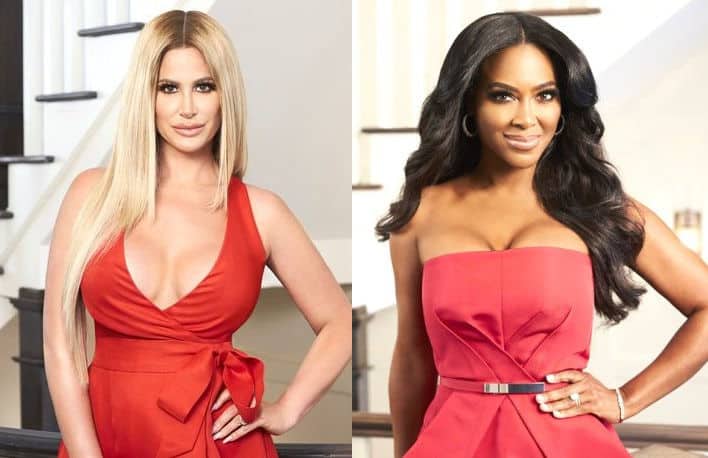 Cast shakeups on the Real Housewives franchises are par for the course. But the scoop coming out of Atlanta is that one of the more prominent peaches is out,  and the choice for her replacement is sure to add insult to injury!

A source close to the Real Housewives of Atlanta is revealing that Kenya Moore is being ousted for her refusal to be more forthcoming about her personal life. Even more, her replacement next season will reportedly be none other than Kim Zolciak!

”Kenya is not going to be back after she refused to let her husband be on the show”, the source said to Radar Online.

Kenya married New York restaurateur Marc Daly in a secret ceremony over the summer, and since then has virtually kept her new husband hidden from viewers, and even most of her cast mates.

Enter Kim, Kenya’s arch nemesis, and original cast member of the show. Kim has absolutely no qualms about sharing every aspect of HER life, and already has history, so the decision to pull a switcheroo was likely a no brainer.

”Viewers know Kim. And they want someone to mix it up with the ladies. Someone new like Kim Fields didn’t work. Kim will easily step up the drama that Kenya refused to give”, the source reported.

Makes sense, but Kenya certainly won’t like it. She and Kim got off on the wrong foot almost from the beginning, and their most recent scuffle, during a party at the home of cast mate, NeNe Leakes, was particularly heated. It began after Kim, apropos of absolutely nothing, boldly accused Kenya of faking her marriage.

See? Drama. And Kim is willing to create it out of whole cloth if she has to. That’s one of the most valued traits of any true reality star… especially a Bravo housewife.

There have been rumors for a while now that Kenya won’t be returning next season, though she has continued to deny she has been fired by Bravo.

As for Kim, she is a part time housewife this season but if this report is accurate, it means she will be promoted to a full time cast-member next year.

TELL US – ARE YOU EXCITED ABOUT THE POSSIBILITY OF KIM REPLACING KENYA?