Married to Medicine Premiere Recap: Get Your Sexy Back 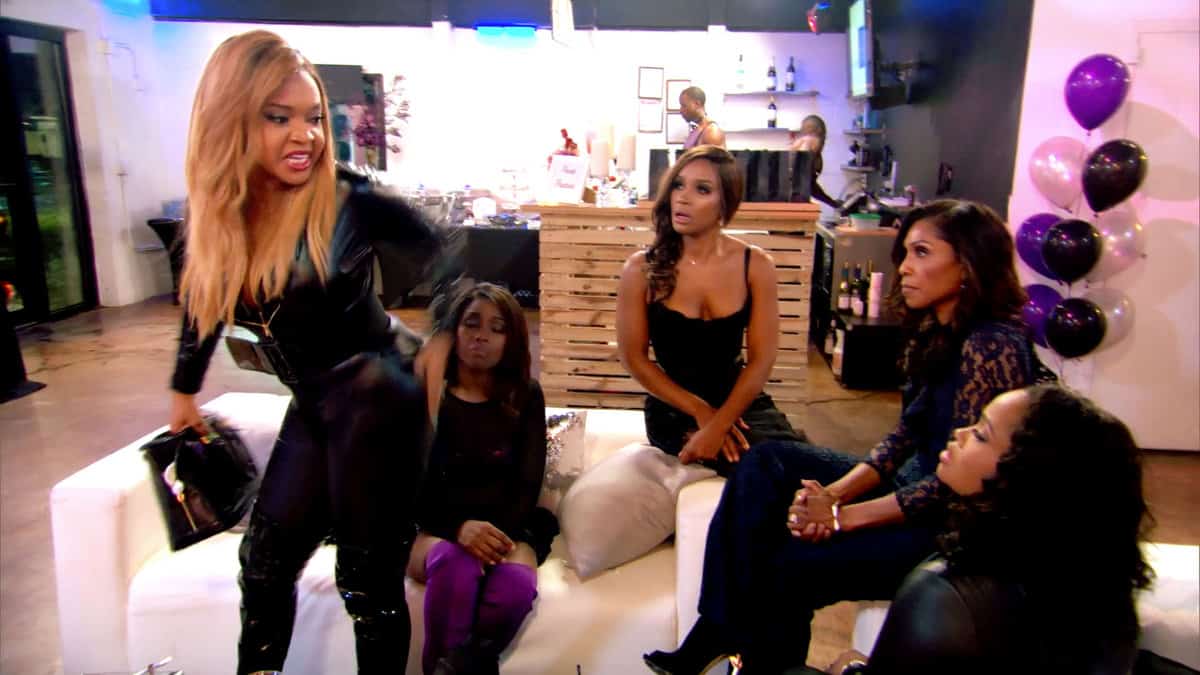 Labor Day is here, and with it, comes the end of summer.  But, if saying goodbye to the long summer nights and hello to school supply lists and falling leaves, gives you the blues, Bravo has the cure for what ails you.  Married to Medicine kicked off its sixth season last night, and the couples wasted no time getting down to some serious drama!

When the episode began, we saw Quad in a heated argument with the other ladies, as they discussed the state of Quad’s marriage, following the shocking revelation she made during the season 5 reunion about her husband, Dr. Greg sharing an intimate evening with an unknown woman in a hotel room.  But the argument was a flash forward, and after a few seconds, we were taken back in time to the month before.

The ladies were each saying that they hadn’t seen or talked to Quad in months, and they were all concerned, and speculating about what was going on with her.  They knew about the indiscretion, of course, and they were all reading the many interviews and articles on Dr. Greg’s other woman, who described the evening she shared with him down to every last, little detail.

As Dr. Jackie and Curtis discussed the matter, Curtis told Jackie that this didn’t have to spell the end of the road for Quad and Greg’s marriage.  He was speaking from experience, of course, as he and Dr. Jackie dealt with the fallout from his own affair last season.  But Jackie wasn’t so sure.  Being on the receiving end of the questions and the whispered rumors was tough on the usually stoic Jackie, and she’s well aware of how difficult it can be to swallow your pride, and try to start over.

Dr. Jackie and Curtis have made every effort to save their marriage, and look to be in a pretty good place, but Jackie admitted that ‘sometimes she was in, and sometimes she was out,’ still unable to fully trust him.  She described arriving home one evening and asking Curtis how he’d spent his day, and upon hearing him hesitate for a moment, and say, “um,” before answering her, Jackie says she was suddenly filled with doubts about what he’d actually been doing, and with whom.  It’s a process, and she’s working on it…but it’s not always easy.

It’s a shame that Quad is distancing herself from her girlfriends when she needs them the most, especially Dr. Jackie, because now Quad is going through the same pain and humiliation.  She revealed that she and Greg were basically living separate lives, and that she’d moved into another bedroom.  She said she was devastated and disappointed by Greg’s betrayal.  She’d imagined that when she got married, she and her husband would be best friends, and that he’d support and protect her every step of the way.  But that hasn’t always been the case with her marriage to Greg, which was on shaky ground before his hotel dalliance, and now, she can barely even stand to speak to him.  The simple fact is, Quad believes the other woman.

And she just can’t quite bring herself to discuss the matter with the other women.  She said that returning to the group was just “too much” for her, and she feared that it would be a “judgmental situation.” She refuses to allow herself to become bitter, or to allow depression to take over, and has opted to throw herself into her work, a new talk show, airing on TVOne, called “Sister Circle.”

Dr. Simone and Cecil were also at a breaking point last season, but after seeking counseling, and getting the encouragement of their friends, they decided to call off their divorce, and try again.  Cecil wasn’t cheating, per se, but Simone had plenty of concerns about the true nature of his relationship with his female best friend, a woman who seemed to know more about his hopes, dreams, and plans for the future than Simone did.  She believed him when he said nothing physical was happening, but the emotional connection he seemed to share with her had been the very thing Simone felt was lacking in their marriage, and she was ready to move on.

Now, Simone and Cecil are working on their relationship, and are still in counseling, but Simone still doesn’t feel they have the emotional connection she craves.  Of course, the fact that they’ve continued to live in separate homes on opposite ends of the city probably hasn’t helped, and their marriage counselor suggested that they try spending at least 3 consecutive nights together in the same place.  Cecil was ready to get started, and arrived at Simone’s office with a bouquet of flowers to propose they begin that evening, but Simone was hesitant.  She suspected that Cecil really just wanted sex, but without the emotional connection, Simone just wasn’t ready.  But Simone also knows the two go hand in hand, and truly wants to make her marriage work, so she called Dr. Tiffanie, the sex therapist, who had advised them during their couples’ trip to Barbados last season.  Dr. Tiffanie advised Simone to try to have fun with her sexuality, and proposed having a “Leather and Lace” party for all of the ladies to teach them how to get their sexy back.

Of course, Toya, Mariah, Contessa, and Dr. Heavenly don’t really need to get their sexy back, as they’re all pretty content in their marriages.  And yes, Dr. Heavenly is still calling Dr. Damon “Daddy.” But Heavenly was worried about seeing Mariah for the first time since their showdown during the season 5 reunion.  It had been silly, really.  Mariah had hung an enormous poster of herself on the door of her dressing room, and Heavenly had drawn a mustache on it.  It was childish, and a bit unkind, but it had also been a joke. It was right there, and Heavenly just couldn’t help herself. And, really, who hangs an enormous poster of themselves?! But Mariah was furious, and stormed off the stage.  She’d refused to accept Heavenly’s apology (mainly because it wasn’t the least bit sincere) and Heavenly was determined to make it right.

You see, Heavenly’s been on a “spiritual journey” for the last couple of seasons, in a quest to become a better person.  She really is a sweet person, but, as Dr Damon told her, she can be “scary” when she gets angry.  But Heavenly loves her friends, and truly wants everyone to get along, so she brought along a peace offering for Mariah that would prove to be anything but!

The “Leather and Lace” party started out nicely enough.  The women turned out in their full sexy back regalia, complete with cat suits and whips, and they laughed and enjoyed plenty of sexy girl talk, as they encouraged Simone to let loose with Cecil.  But there was obvious tension between Heavenly and Mariah, who largely ignored each other.  After Dr. Tiffanie packed up her sex toys, and wished them all the best, Heavenly decided to broach the subject of the poster.

This time, Heavenly’s apology was sincere, and she presented Mariah with a brand new poster to replace the one she’d vandalized.  Mariah was thrilled at first, and seemed ready to let bygones be bygones…until she opened the poster and saw that it was an unflattering photo of her from a few years back.  In the picture, Mariah is 25 pounds heavier, and for some odd reason, is holding a parrot.  Surely, there were better pictures to choose from, and Mariah was convinced Heavenly had chosen that picture on purpose.

But Heavenly was pretty convincing in her innocent act.  She said that she thought it was a beautiful picture, and had genuinely been trying to apologize and make things right between them.  But Mariah wasn’t buying it. She told Heavenly to take her apology, and “kiss it,” smacking herself on the behind for emphasis, adding that anyone who was going along with Heavenly on her “fake,  phony a** spiritual journey” could kiss it too!

Heavenly was shocked! She clearly hadn’t expected this reaction, and again, she tried to hold out an olive branch.  She told Mariah her teeth were “beautiful.” It was an odd retort, but Heavenly is a dentist, so I suppose she notices these things.  But Mariah wasn’t ready to make nice. She thanked Heavenly for the compliment, and said she should fix her own teeth, and her husband’s too.  Now, if there’s one thing you do not do—EVER–it’s talk trash about Heavenly’s “Daddy!” She told Mariah to fix her husband, with his “small stuff!”

At this, the other ladies winced, knowing that things had reached a point of no return, and would surely only get uglier from there…and boy were they right about that!

Mariah, who was just about to storm out the door, turned back around and delivered the death blow by alleging that Damon cheats on Heavenly!  “I know plenty of people who have slept with Damon,” Mariah said.  WHAAAAT?! Heavenly wasn’t buying it, and just said “don’t do that.”  She was surprisingly calm about it, but then Mariah said, “You want me to bring the receipts?! Do I need to bring the receipts, baby girl?! Because I’ve got receipts!”

Now, the threat of “receipts” changes things, am I right? Just saying something in the heat of anger is one thing, but to suggest that you have proof?! Well, that’s another story, altogether, and it was clear that it had Heavenly rattled.  “What is she talking about?” she asked the other ladies, as they sat in stunned silence.

Dr. Jackie was concerned.  The last thing this group needs is another cheating scandal.  And Damon of all people?! It was just too much!  The ladies gathered around Heavenly and tried to calm her down, as Contessa ushered Mariah out the door.  As she paced angrily around the parking lot, Toya arrived, and asked what happened.  She listened to Mariah’s side of the story, and encouraged her to come back inside so that they could all talk it out. Mariah, who didn’t want to give Heavenly the satisfaction of running her off, agreed, but warned that Heavenly had better stay 50 feet away from her at all times.

Back inside, the Mariah and Heavenly simply glared at each other from opposite ends of the room, until talk turned to the ladies’ concerns about Quad…a subject they actually agreed on.  She’d once again declined to spend time with them, and had chosen to be with her work friends instead of attending the “Leather and Lace” party.  They admitted that this stung, and said they wished she’d “swallow her pride” and lean on them for support.

Well, we’re only one episode in, and things are already getting pretty juicy, and based on the previews for the rest of the season, we’re in for a pretty wild ride. Stay tuned!

TELL US – THOUGHTS ON THE MARRIED TO MEDICINE SEASON PREMIERE?