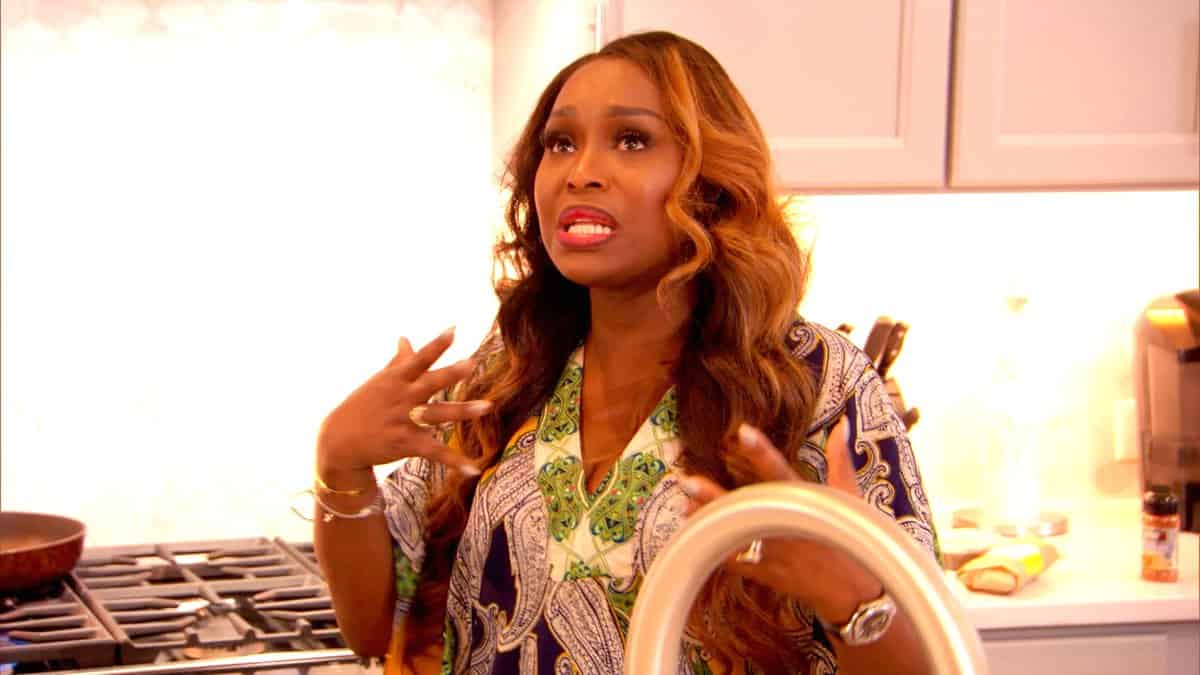 It looks like the couples of Married to Medicine are headed for some major changes. While last night’s episode didn’t bring a lot of drama. it’s clear that they’re gearing up for something big.

When we picked up with the crew last night, Quad and Toya met up for some much needed girl talk, following their near fight during Jackie’s pajama party last week.   The two women are finally in a good place again, and they discussed everything from Toya and Eugene’s plans for their “forever home” to the downright brutal way in which Quad chose to ask Greg for a divorce–via text.

That’s right. Quad wanted to avoid a scene, so she packed up her stuff, placed the divorce papers on the kitchen table, and texted him after she was already gone to tell him to sign them.  It was a brilliant choice, and while I would ordinarily say that any long term relationship, especially a  marriage, should be ended in person, I think we can all agree that Greg had this one coming!

Of course, Toya can’t relate to the marital discord.  She and Eugene seem pretty happy.  In fact, they were preparing to celebrate their 10th wedding anniversary, and discussed taking a trip to celebrate the milestone.  Eugene suggested another trip to Cabo, the site of their very first trip as a couple, but Toya disagreed.  She said the trip had been “Ungodly,”  and “didn’t really count” as their first trip as a couple since they weren’t married at the time, and weren’t really doing anything but having sex before marriage.  Now, if you think this is more information than you needed to have about Toya and Eugene’s early years, imagine how their sons felt! Somehow, despite the fact that they were sitting at the kitchen table, no more than 10 feet away, Toya forgot they were there, and she blurted out her history of premarital sex with their father without thinking.

Once they boys finally stopped giggling, Toya came up with the plan to invite the other couples along on their trip and use it as the group’s annual couples’ retreat.  As the anniversary couple, she decided that she and Eugene would be the perfect hosts, and Eugene agreed.  She also felt that, after last year’s debacle, which was hosted inexpertly by Heavenly, everyone needed a do-over.

When she broached the subject of the trip with the other ladies, they all expressed concern over how to handle the Quad situation.  They certainly didn’t want to leave her out of a group trip, but at the same time, it was a trip for couples, and she was no longer a couple.  But surprisingly, when Toya called, and asked her about going, Quad sad that she would love to.  She said that while she was no longer married and wouldn’t take part in the couple activities, she could certainly use the time to work on her relationship with herself.

Toya was pleased that Quad had agreed to join them.  Now, there was just one more problem: what was she going to do about Contessa?! The two women have been on the outs all season, and haven’t spoken in weeks.  During that time, Contessa underwent a prophylactic double mastectomy.  And while Toya has asked about her, and even thought about calling her or stopping by to check on her, she thought better of it because she knew they weren’t in a very friendly place.  But everyone insisted that Toya must invite her–the couples’ retreats were for everyone, after all.  Toya had her doubts that Contessa would even come.  Since her surgery, she hadn’t even come to the ladies’ local events, so Toya figured she wouldn’t have any interest in getting on a plane.  Toya wasn’t the only one with doubts.  The other ladies suspected that she was staying away to avoid further conflict with Toya, but Toya doubted she had that type of power, although she said if she did, she’d certainly be happy to use it to say, “Bye B***h.”

Ouch, right?! But Contessa should be up and around by now.  It’s been over 3 weeks and as Toya pointed out, Contessa isn’t exactly soft.  She was in the Navy, for crying out loud! Dr. Jackie paid her a visit to bring her a Fifty Shades of Pink care package with plenty of goodies for women who’d had mastectomies and to ask why she was still holed up in the house.  Contessa insisted that Toya had nothing to do with it, but Jackie wasn’t so sure.  She’d had the same surgery, and had been back at working full time in 2 weeks.  She encouraged Contessa to get out and have some fun.  Contessa agreed, but said during her interview that she couldn’t wait for Jackie to leave so she could go back to bed, which she did as soon as she promised that she’d go out and have fun as soon as her tubes were removed.

As it turned out, Jackie had better things to do than try to drag Contessa out of the house anyway,  She and Curtis were having a date to celebrate their 16th wedding anniversary.  No easy feat, considering what they went through last year.  But they seem to be getting to a really good place, and Jackie says she gets a little closer each day to getting over the hurt and trusting her husband once again.  Curtis surprised her by taking her to a Parisian themed outdoor restaurant to pay homage to the first trip they’d ever taken together.  It was a sweet and romantic gesture, and both recalled the trip fondly as a time they spent really getting to know each other.  Curtis remembered realizing for the first time just how much his future wife liked to be in control.  Conversely, Jackie recalled how she learned that Curtis loved adventure.  But, as the saying goes,  opposites attract, and the rest is history.

With so much black love flourishing all around her, Mariah decided to celebrate it by throwing a “Black Love” themed party.  She asked that all the couples come dressed as their favorite famous black couple.  She and Aydin made a pretty convincing “Cookie and Luscious Lyon” from Empire, while Simone and Cecil were a little more casual as Sanaa Lathan and Omar Epps a la “Love and Basketball.” Toya and Eugene chose to play a real couple, and turned up as Steve and Marjorie Harvey, and Jackie and Curtis kept it real as well as the most powerful black love duo of all–Barack and Michelle Obama.  It was a good choice, as Jackie and Curtis are certainly a power couple, although Simone thought that Curtis might make a better Bill Clinton, as he’d had a Monica Lewinsky of his own! Black Love shade? No, no no..it was neither the time, nor the place for such a thing.  But Quad felt it.

She had been planning on attending the party, and in fact, everyone wondered what costume she would wear.  The men guessed she’d follow Jackie and Curtis’ lead and go ultra powerful single, black woman, and make an appearance as Oprah. But it wasn’t to be.  Just as Quad was shopping for her costume, she thought about her divorce and stopped in her tracks, crying in the middle of the store, she explained to Heavenly, who’d come by to pick her up for the party dressed like Tina Turner.  Now, this was an odd choice, as if she was Tina, one would assume that Damon was going to show up dressed as Ike Turner, meaning that they were coming to the “Black Love” party as perhaps the most toxic black couple in all of history! But I digress.

Heavenly didn’t want to leave Quad alone for the evening, and said that she actually hadn’t really wanted to go anyway.  She and Mariah are barely speaking, after all, following Mariah’s claims that she knows “plenty of people” who have slept with Damon.  But she also felt that the theme was insensitive, considering their dear friend was going through a divorce.  She decided to skip the party, altogether, and called to tell Simone and Jackie that she was staying home to have sex with Damon instead.  It was sweet of her not to throw Quad under the bus, but she could have come up with a better excuse.  No one was buying that one, and they all knew that she was likely just trying to avoid another run in with Mariah.  Mariah knew it too, and she felt it was unfair.  They hadn’t been getting along all season, but they went to events to support one another, and they did a pretty good job of just avoiding each other anyway.

So, like I said, they’re laying the groundwork for some pretty intense drama, and it looks like we won’t have to wait long.  The couples are wheels up to the couples’ retreat next week, and if Toya thought it was going to be less messy than last year’s trip, she is sadly mistaken! Stay tuned.