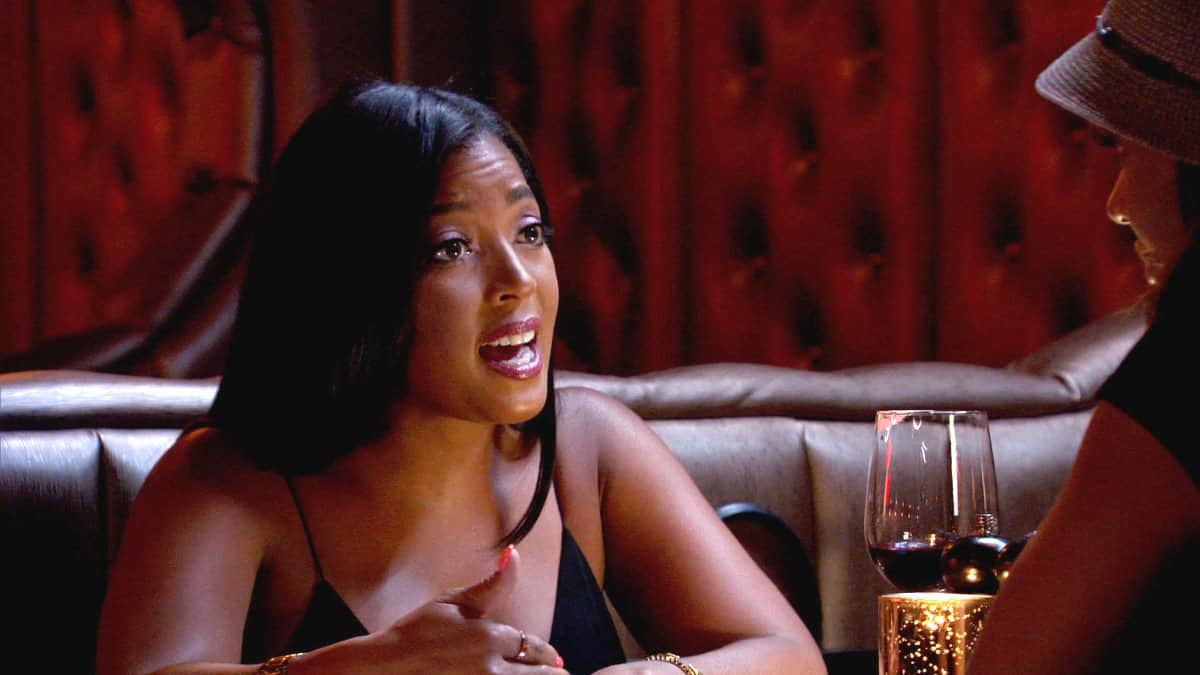 I’ll say this about the ladies of Married to Medicine…they can pack a lot of drama into an hour, and the truly impressive part is that if there doesn’t happen to be any drama at the moment, they’ll just make some up, and fight about that.

When we picked up with the ladies last night, they were still at Heavenly’s house for her crab boil, and all hell had broken loose.  Quad was in the house crying because her friends had called her out for pulling a disappearing act on them since she and Dr. Greg made the bombshell revelation about his hotel room romp with another woman at last season’s reunion, and Heavenly and Mariah were outside, back at each other’s throats, with Mariah, once again claiming to have “receipts and invoices” to prove Dr. Damon’s cheating.  But where are they, Mariah?  Seriously, it’s time to put up or shut up at this point.  Don’t get me wrong, I love “receipts and invoices,” but either produce them, or go sit down somewhere.

Heavenly, of course, took the bait.  She claims that she has no worries about the infidelity claims against “daddy” being true, but every time Mariah says it, she gets awfully defensive.  Last night, she threw Mariah out, calling her everything but a child of God as she sashayed her way back to her car, swinging that blonde weave, and loving every minute of having gotten under Heavenly’s skin once more.

Quad finally came back outside and told Simone she would like to speak to her privately.  It was Simone, after all, who had been the most hurt by Quad’s absence.  She’d felt they were close, and was genuinely stung when Quad decided to shut them out.  When Quad took her friend by the hand, and led her to a quiet corner of Heavenly’s yard, she explained that she’d been going through a lot lately, just as Simone had been.  But Simone was unmoved.  She said that the difference between them was than she was upfront and open about her life, and allowed her friends to be a source of support for her.  It was at that moment that Dr. Jackie finally arrived at the party like an angel.  She could definitely sense that something had gone on while she’d been stuck at the hospital, and knew that her steady voice of reason was needed.

The other ladies decided to join the conversation, as well, and Quad apologized to all of them, as she began to break down and cry, once more, as she explained how difficult it had been for her to “wake up every day and be this person,” since the troubles began in her marriage.  At this point, Heavenly turned on her and demanded to know why a woman like her was staying in such a bad situation, and wasn’t moving on to make herself happy.  She was really going off on her, and it finally became much more clear why Quad had chosen not to confide in her friends.  No one wants to be kicked while they’re down.  But let’s face it–Heavenly was speaking the truth, brutal though it may have been.

Quad seemed to accept what Heavenly said, and once again apologized for going MIA on her girls, but added that she needed to feel safe confiding in them.  Simone assured Quad that she could call her anytime, but cautioned her against putting her friends on a shelf “like a toy she could play with whenever she felt like.”  Quad agreed, and the ladies decided that this was what “sisterhood was all about.”

The following day, Mariah paid a visit to Toya, who filled her in on what happened at Heavenly’s after she left.  She also asked if those “receipts and invoices” Mariah mentioned were real, and Mariah said that they were, but, once again, she was reluctant to elaborate, and instead changed the subject to Toya’s beef with Contessa.  She encouraged Toya to discuss her feelings with her, and assured her that she would receive it much better than Heavenly had received what she’d had to say to her.

Across town, Dr, Jackie was busy planning another FITNI Field Day with her friend, Eboni.  As viewers know, Jackie feels that physical fitness is the cure to whatever ails you, and she was desperate to get her friends back on track with one another–or at least back on speaking terms.  When Curtis came by her office, bearing gifts and lunch (low carb, of course) Dr. Jackie enlisted his help, as well, and he agreed, especially since he’d spent the last Field Day by himself in the dog house following his affair.

Heavenly decided it was time to pay another visit to her anger management therapist, Dr. K., and told him all about her second showdown with Mariah.  He told her that she was being “emotionally immature,”  and using all of this bluster and bravado as a “defense mechanism” for what was really bothering her–i.e. not Mariah.  He encouraged her to dig deeper, and went full-on Freud as he asked her to describe her childhood, particularly her relationships with her mother and sister, which Heavenly revealed had been less than close at times.

According to Heavenly, of all the women, Mariah was the one who reminded her most of her sister, Denise.  The two had been life night and day growing up, Heavenly explained.  Heavenly had been the smart one, Denise the pretty one, and Heavenly’s mother had always put a certain pressure on Heavenly to succeed that she never put on her sister.  Both girls had been resentful of the differences, and when Heavenly invited her sister to come and live with her when they were young adults, she said her sister had been jealous of her success, and had been disrespectful to her in her own home–just like Mariah had.  Since that time, Heavenly said she no longer spoke to her sister because they always ended up arguing–just like her and Mariah.

And as the saying goes, if it’s not one thing, it’s your mother (at least I think that’s the saying).  Heavenly revealed that her mother “showed” love to her, but rarely said the words, which made them difficult to receive when she heard them from other people–even Damon, whom she calls “Daddy.” Uhh huh! It’s all beginning to make sense now, isn’t it?  Dr. K. encouraged her to go back to Miami, stat, so that she could face the difficulties of her childhood head on, and begin the process of leaving them in the past.

A few days later, it was time for the FITNI field day, and all of the ladies turned out to play, including Quad.  When Contessa arrived, she had a hug and an air kiss for everyone, including Toya, who returned the love, but only superficially.  She didn’t feel very air kissy toward Contessa, but she kept her mouth shut, as she knows better than to cause a scene at one of Jackie’s field day events.

But Contessa could feel the tension, and when she got a second to get Toya alone, she pulled her aside to apologize, explaining that she had a lot going on with her father being ill during his visit.  Toya accepted the apology (again you do NOT mess with Jackie’s field day) but was awfully cold about it.  During her interview she said “anyone can apologize,” and that she felt that Contessa simply didn’t understand what she’d done.  For the record, neither do I.  All of this stems from Contessa not showing up at Toya’s birthday party a few weeks ago because she was busy tending to her father, who is clearly quite ill.  If anything, TOYA should be apologizing for calling her out about such a childish issue, and not letting it go, but as usual, girlfriend was like a dog with a bone!

Everyone had a pretty good time at the FITNI event, and when Toya reached out to Contessa the following day to invite her to dinner, Contessa thought that surely everything was back to normal, and that they were good.  She was wrong!

Toya launched into her tirade the moment Contessa took her seat.  She said that last year they were cool, but that “something had changed” between them.  Contessa was understandably confused, and said that Toya was “making something out of nothing,” and that she thought they had squashed all of this nonsense the day before.  Toya pointed out that it wasn’t just Contessa’s absence at this year’s party that was bothering her, but that she was also still sore about Contessa’s comments during her “In the Black” party last year, in which Contessa whispered about the silliness of spending a bunch of money on a party to celebrate the fact that you were finally out of debt.  Contessa dismissed this, as well, and told Toya she was simply trying to frustrate her so that they could have something to argue about, and that she just wasn’t doing it.

At that moment, the waiter came by to take their orders, and Contessa took her time, asking questions about recommendations and substitutions of meat for fish, as Toya sat there fuming.  How dare she order food in a restaurant, while Toya was busy whining about made up beefs from a year before?!

Toya asked for more time before she ordered, and started back in on Contessa as soon as the waiter left.  Contessa had simple had enough at that point.  She’d been patient long enough, and started to get up and walk away, before she thought better of it, and returned to say one more thing (or remembered that she’d just ordered a whole bunch of food) at which point Toya announced that she was leaving instead, and flounced out of the restaurant, leaving Contessa exhausted, but slightly amused at this childish woman, who clearly needs a hobby–besides making up reasons to be offended… and throw parties.

The show faded to black at that point–thank goodness (it was all getting a little exhausting), but there will be more drama to come, as the doctors are back in the house next week. Stay tuned!

TELL US – THOUGHTS ON THE LATEST MARRIED TO MEDICINE EPISODE? WHO IS TO BLAME FOR THE HEAVENLY & MARIAH FIGHT? DO YOU THINK QUAD IS BEING GENUINE WITH THE LADIES? ARE THE LADIES TOO HARD ON HER? IS TOYA OVERREACTING WHEN IT COMES TO HER FEUD WITH CONTESSA?