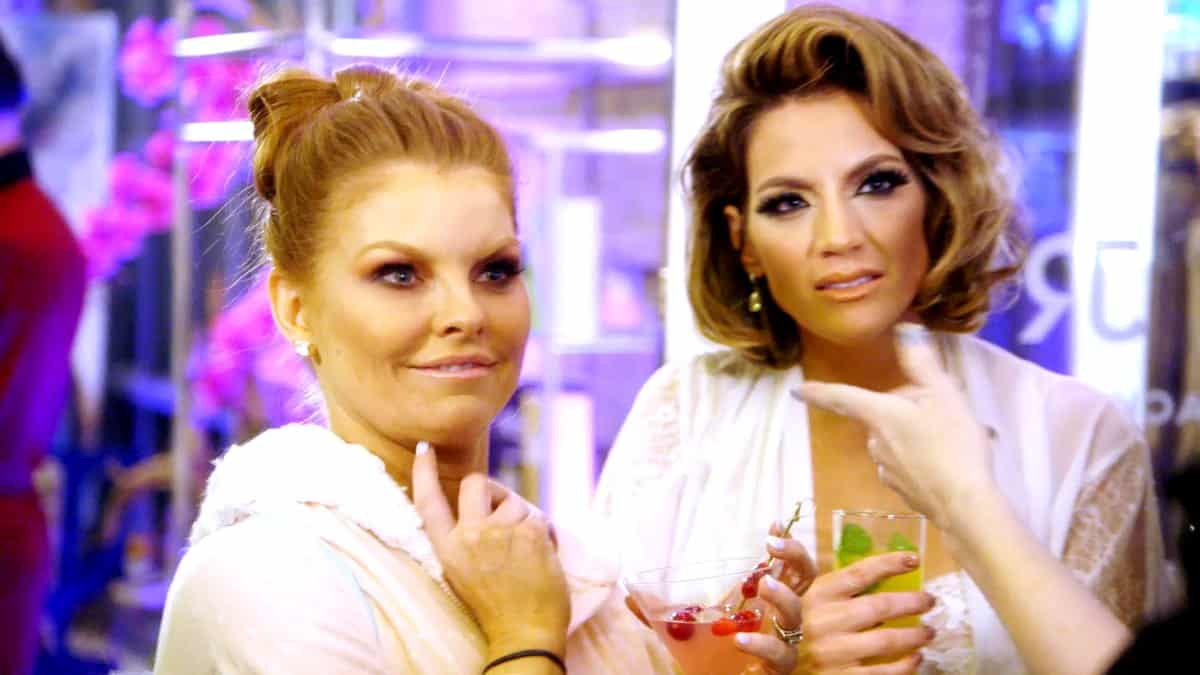 Well, the southern belles of The Real Housewives of Dallas were back at it again last night, with plenty of arguing, Texas glam, and of course, talking behind each other’s backs.  They’re still worried about their standing in Dallas “society,” and let me tell you, keeping up that whole facade is not for the faint of heart!

When we picked up with the ladies, D’Andra and  Kameron were both still seething following their showdown last week.  D’Andra is sick and tired of hearing Kameron, an uptight princess if there ever was one, lecture her about her “reputation” and who she should and should not be seen around town with, and when Kameron got her mother-in-law, Jimmy in on the act last week, it was just a bridge too far for D’Andra.  She confronted her later, and told her to mind her own business, and to kindly ask Jimmy to do the same.

As for Kameron, she can’t believe that D’Andra’s not thanking her for setting her straight! According to her, D’Andra’s reputation is taking a serious hit because she’s often seen out and about drinking with Brandi.  I know what you’re thinking: D’Andra and Brandi are grown women. So what if that have a glass (or bottle) or two of wine over lunch once in a while, am I right? Well, like I said, Kameron’s pretty uptight, and being a part of the famed Westcott family means the world to her, and she can’t fathom why D’Andra, a member of the equally prestigious Simmons family isn’t spending every hour of every day cultivating her reputation and worrying about what everybody else thinks.

Now unfortunately, their falling out coincided with some pretty important events for the RHOD ladies.  Cary, eager to reconnect with her heritage and get closer with her father, has decided to take a trip to Copenhagen, and asked the ladies to join her, because well, what better time to hop on a plane across the country than when everyone is at each other’s throats? But Cary was oblivious to all of that, apparently, and sent out gift baskets filled with danish, pickled herring, and Danish beer, along with a note inviting the other ladies to come along on the trip.  They were all thrilled, and they eagerly accepted–even Stephanie, who didn’t even know where Copenhagen was.  Now, THAT’S friendship!

It was also time for LeeAnne to do some wedding gown shopping.  She asked both D’Andra and Stephanie to come along, but D’Andra declined, claiming she was far too busy.  It hurt LeeAnne to the core.  The two women have always been close, and the recent wedge between them –not to mention the fact that D’Andra seems to have replaced LeeAnne with Brandi as her bff–has left LeeAnne reeling.  But Stephanie showed up, and was glad to be there.  She’s feeling close to LeeAnne for the very first time, and she’s really enjoying getting to know the “new woman” LeeAnne’s become since last season, so she gave her some pretty valuable advice: she told her to try to work things out with D’Andra right away, and warned her not to let their hard feelings fester because before you know it, too much time would have gone by, and they were missing out on major events in each other’s lives, and all because of nonsense.  LeeAnne agreed, but continued to blame D’Andra for the rift between them.

But D’Andra actually had a pretty good excuse for skipping the shopping excursion.  After years of dangling it in her face like a carrot, her mother, Dee,  has finally bitten the bullet, and handed the business over to D’Andra.  But when the two women met to sign the papers, D’Andra couldn’t talk about anything but her recent arguments with her friends.  In addition to Kameron’s lectures, D’Andra’s also annoyed with LeeAnne for going around telling everyone who would listen that she’s “concerned” about D’Andra’s drinking.  D’Andra doesn’t feel that she has a drinking problem, and, in fact, she doesn’t think that LeeAnne believes she does, either.  D’Andra thinks LeeAnne only said it to get under her skin, and get back at her for questioning LeeAnne’s relationship with Rich.  But once again, LeeAnne went a bridge too far by bringing it up to Dee.

Dee can be a pretty tough cookie, and she’ll go from society dame to mama grizzly in 15 seconds flat, if you mess with her daughter! But she’d also like to see D’Andra stand up for herself a little more.  She told her that her biggest mistake with Kameron and Jimmy had been not telling them what they could do with their opinions.  She also told her daughter to stop being so thin skinned, or they’d just keep mowing her down, and that she should just tell them “how the cow ate the cabbage!” I think those are fighting words in Texas, and Dee warned that she was about to get “real unresepectful” if these women kept coming for her daughter.

In the meantime, LeeAnne and Kameron were discussing the issue across town, and both agreed that D’Andra was “psycho” for not showing up to shop for wedding dresses.  Every once in a while, these ladies will say something that lets you know that they have way too much time on their hands.  Also, clearly neither one of them has the slightest clue what “psycho” means.  But that wasn’t all.  The ladies agreed that D’Andra had a “responsibility” to all the other Simmonses to act a certain way, and that her recent behavior was simply “self destructive.”  When Kameron described the way D’Andra had confronted her about involving Jimmy, LeeAnne was just as aghast as Kameron had been, and warned that the next time D’Andra came for either of them, she was going to “karate chop her in the throat.” Good grief!

Both LeeAnne and Kameron also expressed concern about flying half way across the country while they felt this way, but first, LeeAnne had to get through the pajama party she had planned as a way to promote D’Andra’s beauty line, “Hard Night, Good Morning.” She’d planned the event back when she and D’Andra were still in a good place, and was now regretting it.  Kameron wasn’t going anyway, but agreed that it wasn’t going to be easy to get through the evening.

On the night of the party, the ladies turned out in their sexiest pjs, and Dee was in rare form.  She told Brandi and Cary that they’d better “take care of” D’Andra while they were “in Sweden” because if she came back hurt, they were all going to “wish they were dead.” I told you that cow eating the cabbage comment was the precursor to something much more sinister! Also, it was clear that none of these women had taken a geography class in their lives.  When Dee was informed that Copenhagen was not, in fact, in Sweden, she asked where it was, and they simply told her it was close enough.

Dee also wasted no time in telling Brandi absolutely everything that LeeAnne had been saying about her.  Brandi really couldn’t care less what LeeAnne thinks, but her adoption of Baby Bruin isn’t completely finalized yet, and allegations of alcohol abuse really won’t help.  It’s bad enough that before they reconciled, D’Andra was making public allegations about Brandi abusing Adderall, and now this?! 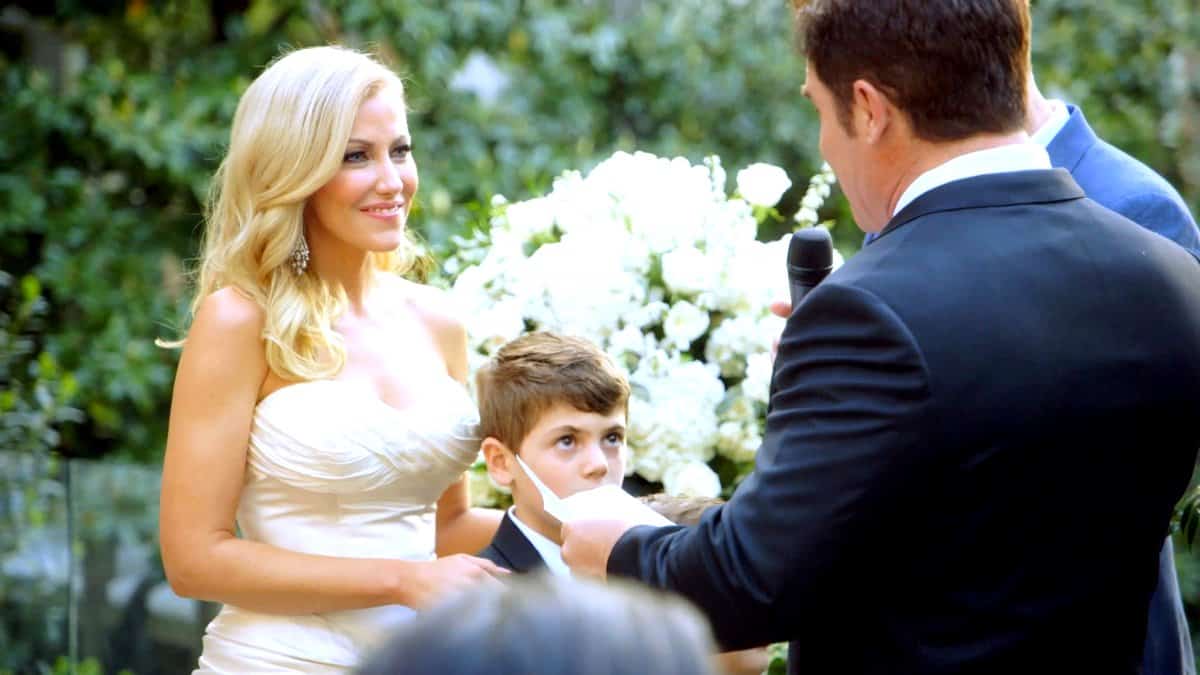 Later, Stephanie and her husband Travis celebrated a decade of marriage with a beautiful vow renewal ceremony, which was only slightly marred by the fact that her husband mentioned “butt sex” during the toast…inches from her parents, who were less than amused, and the fact that her best friend, Brandi stick around at the event due to a “prior commitment.” That last part hurt her, and it’s clear that things between them are changing. She feels stuck in the middle between her new friendship with LeeAnne and her loyalty and need to Brandi, and her need to “hate who she hates.”

The following day, the ladies were wheels up to Copenhagen, although they were all less than positive about how the trip would go, and based on their past trips, I must say that I am too. They’ll likely take Cary’s advice, and simply “drink their way through it,” but from the looks of the previews for next week’s episode, it’s only going to lead to more trouble. Stay tuned, viewers, Texas is coming to Copenhagen, and it may never be the same!