Ashley Jacobs Slams Southern Charm Cast and Patricia In Instagram Rant! Speaks Out On Break Up with Thomas and He Responds 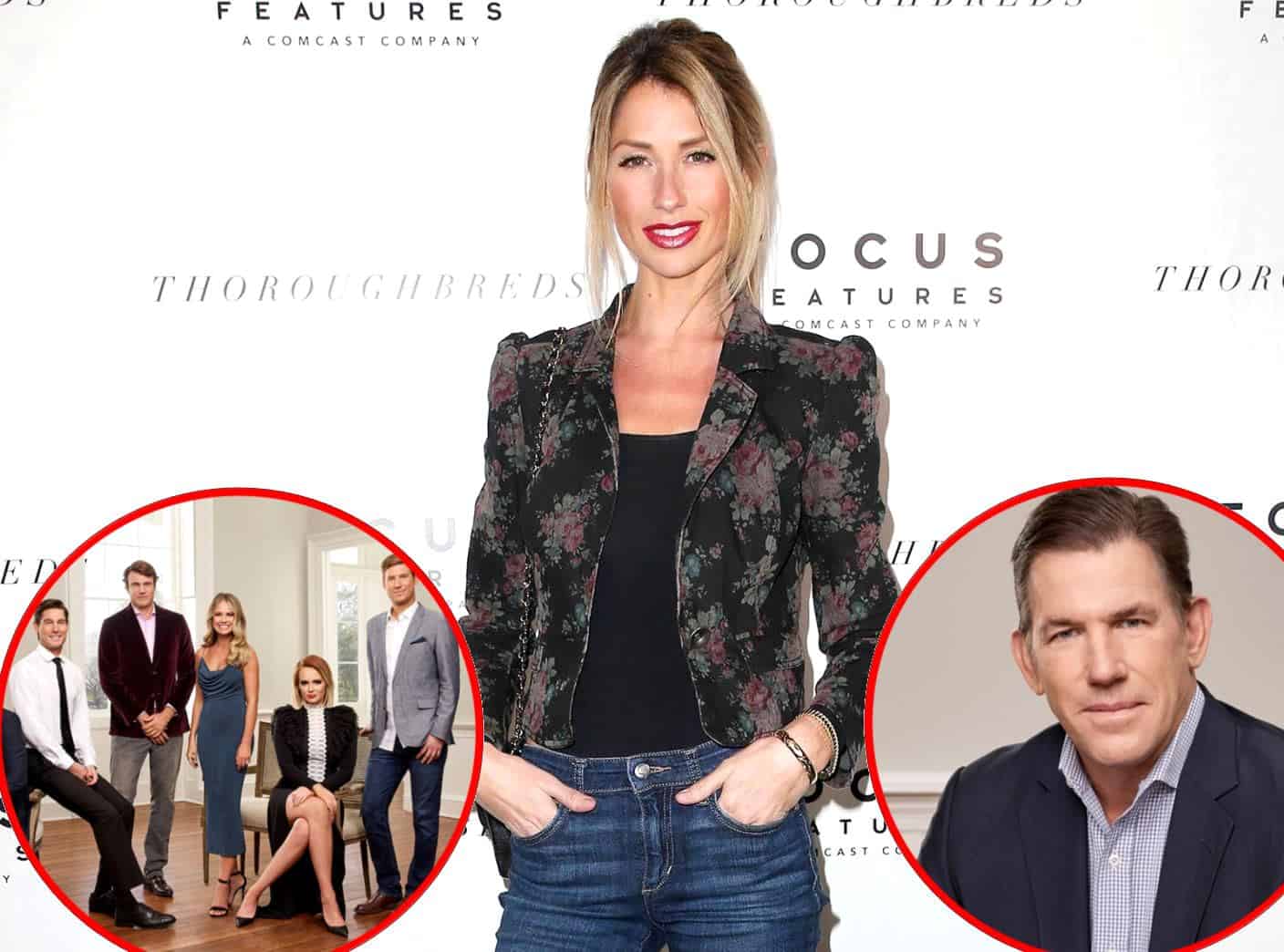 Ashley Jacobs opened up about her latest split from Thomas Ravenel on Instagram today, as she also slammed the cast of Southern Charm.

While the former Bravo couple, who will not appear in the upcoming season of the Bravo series, has experienced ups and downs in the past, Ashley told her fans and followers that her good times with Thomas far outweigh the bad.

Her post comes two weeks after Thomas dissed her on Instagram, asking her to stop badmouthing his ex-girlfriend Kathryn Dennis, and telling her to seek help.

“For all the crap we went through together this past year, the good really does outweigh the bad,” Ashley wrote under a slideshow of the two of them on Instagram. “You were my boyfriend during a time in my life when I needed you and you needed me… I know [fate] brought you and me together for a reason… even if we weren’t made to last forever.”

“We might not be creating new memories anymore, but I still treasure the ones we have, and I’d do it all again knowing how things turned out in the end,” Ashley continued. “Thank you for the memories, the good and the bad, and I’ll forever cherish them till the day I leave this world… I look forward to being good friends for a long, long time….”

After seeing what his ex-girlfriend had written, Thomas responded with a sweet message of his own.

“Our time together brought much outside pressure, but what they didn’t see was how I treasured your precious presence,” he said. “I pray that you’ll be spared more senseless anger moving forward. I wish you good things, Ashley. Only good things. Always, Thomas.”

In the comment section of the same post, Ashley took aim at her former Southern Charm co-stars after one of her followers suggested she become friends with them now that she and Thomas have split.

“Yeah no offense, but the cast are a bunch of losers,” Ashley replied.

Ashley then took aim at Patricia Altschul, a published author and philanthropist, by adding, “Especially that old Patsy broad.” 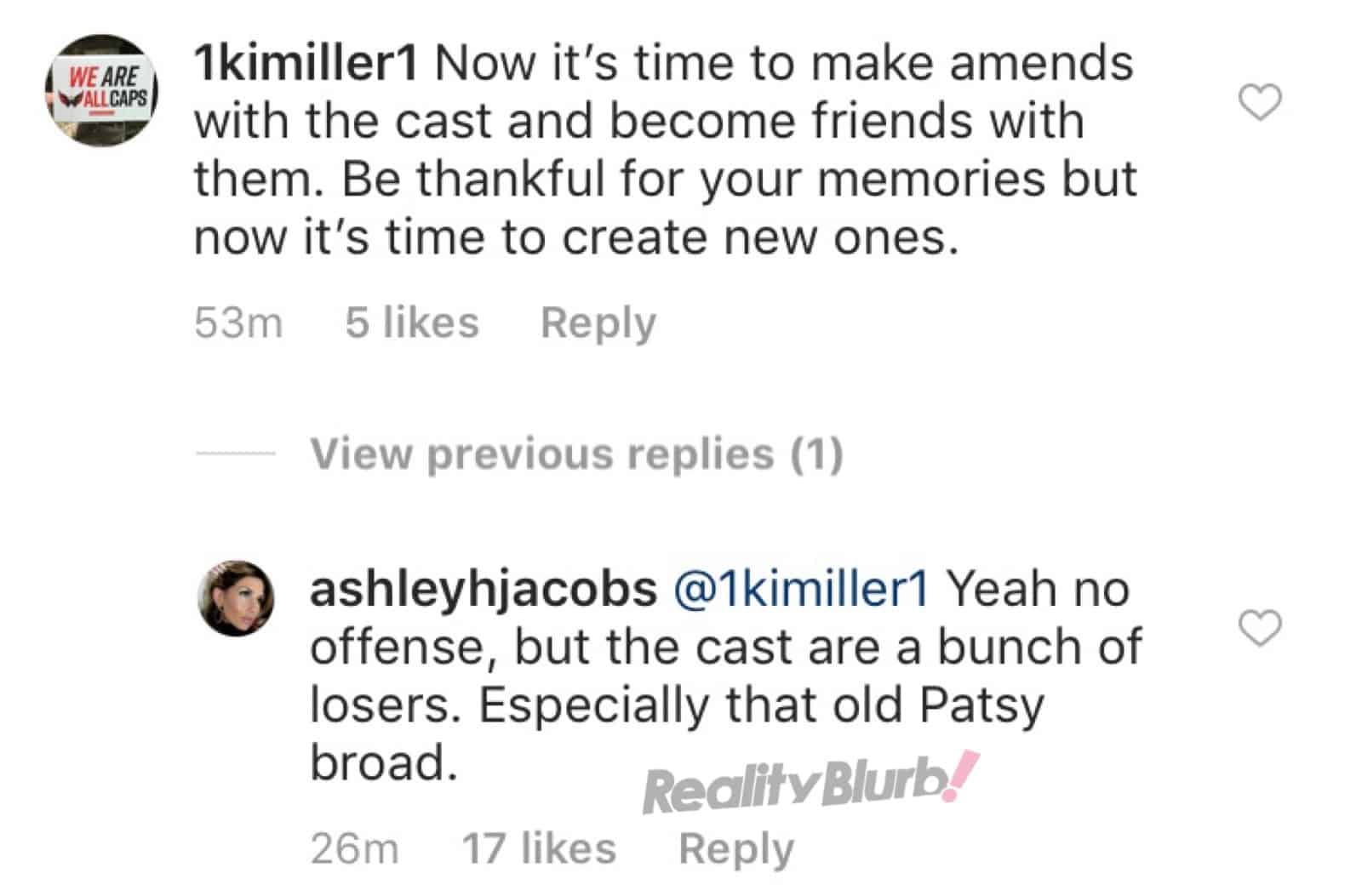 Ashley wasn’t done yet as she rolled out more vicious comments against her former castmates.

“Never would I do Southern Charm again!!!” wrote Ashley. “I took all the bullets for them last season. They won’t take advantage of me again. I hope the sh*tty cast doesn’t quit their day jobs (oh wait, they don’t have jobs).”

And despite posting about the cast, Ashley insisted she wants to “distance” herself from them. 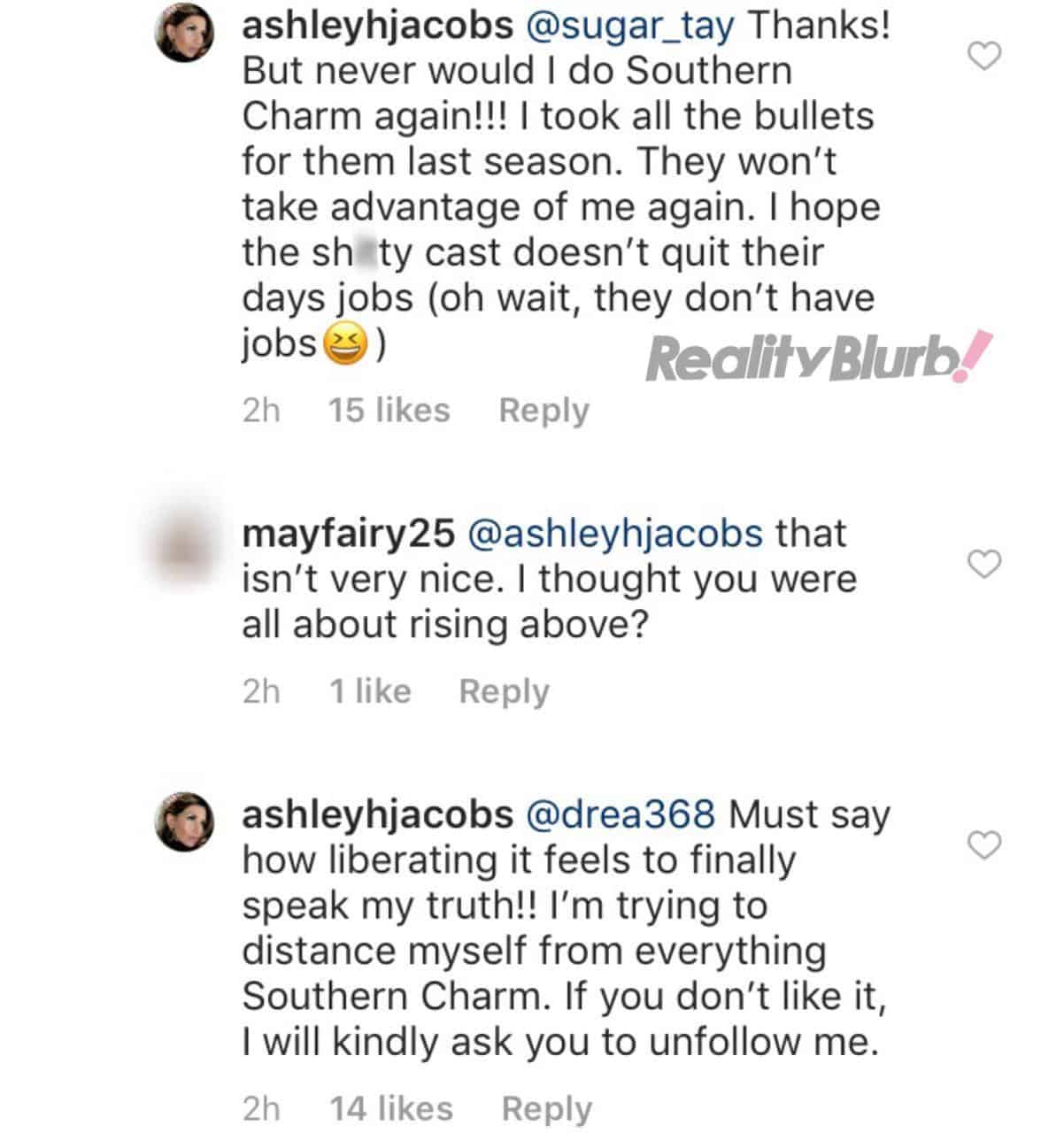 Although Patricia was once friends with Thomas and Ashley, she turned against them during season five of Southern Charm and accused the ex-couple of attempting to sabotage his former girlfriend, Kathryn Dennis, amid their custody battle.