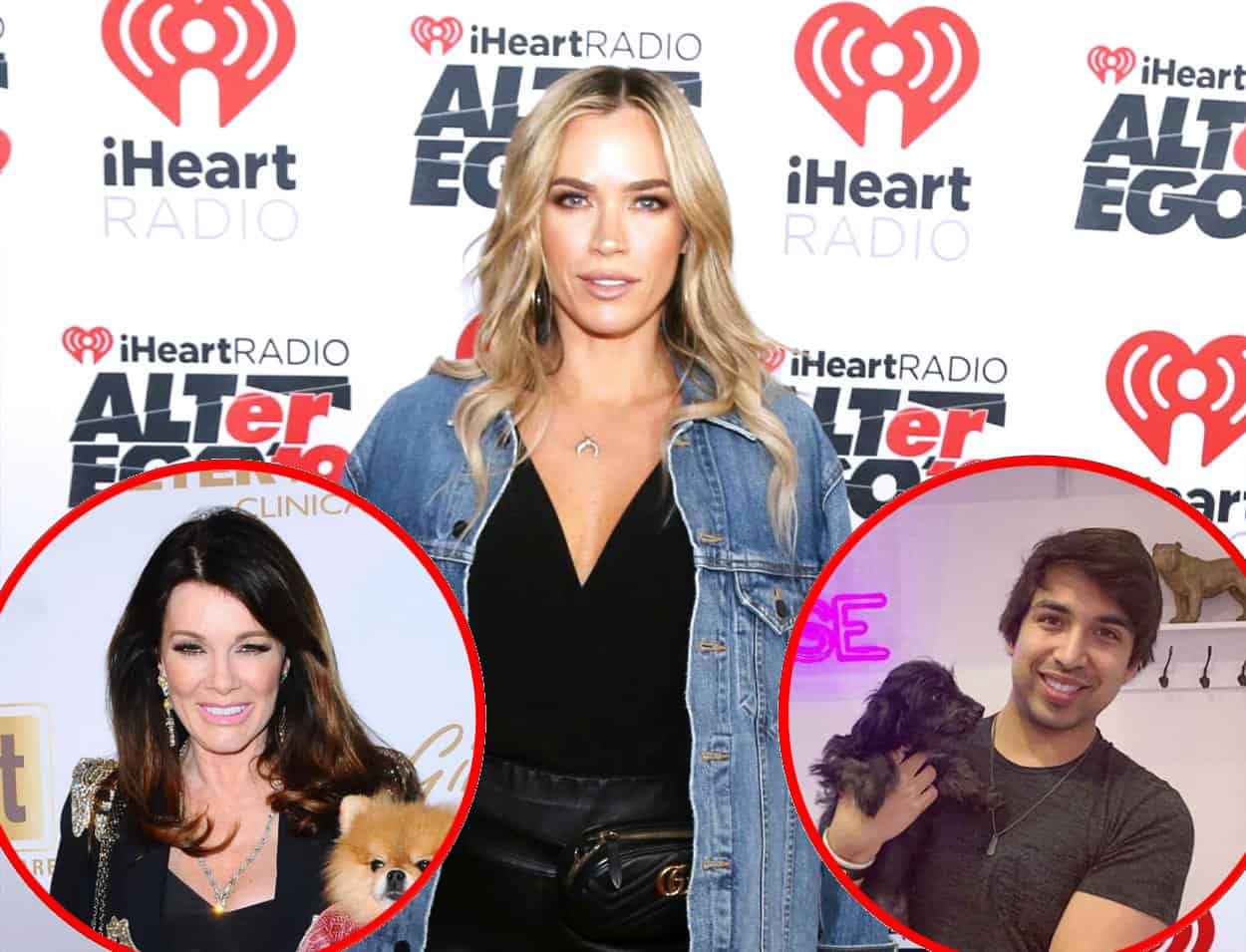 Teddi Mellencamp is speaking candidly about her involvement with Lisa Vanderpump‘s alleged Puppy Gate scheme against Dorit Kemsley in her Bravo blog,

In addition to telling readers of her Bravo blog that she wishes she came clean sooner, the Real Housewives of Beverly Hills star released new text messages exchanged with John Blizzard, a Vanderpump Dogs employee, and accused John of lying for Lisa in regard to her own involvement with the story.

“I do apologize for my part in all of it. I should have come clean with the entire group of women the first chance I had,” Teddi wrote.

During Tuesday’s show, fans watched as Lisa met with John to discuss his communications with Teddi about the situation surrounding Dorit and a dog she adopted. However, when it comes to John’s admission to making up his claim about Lisa telling him to inform Teddi about Dorit’s dog ending up at a shelter, Teddi suggested John was lying for Lisa.

“So LVP has John Blizzard come to her home (how she got in contact with him since she doesn’t “have any communication with John Blizzard, ever. I don’t even have his phone number” as she said verbatim last week, remains a mystery) to prompt him to lie for her, oops, I mean set the record straight,” Teddi stated.

Teddi went on to call out Lisa on several things, including her claims of not being close to John. As she noted, how would Lisa have known that John was in the loop about Ken’s fight with the other John, Dr. John Sessa, if she “barely knows him” and “never speaks to him?”

“[Lisa] isn’t worried that Blizzard told me, just that he told me she wanted him to tell me. But back in the Bahamas, she agreed with Denise that Blizzard never should have said anything, period. So, which is it?” Teddi asked.

Although Lisa obtained text messages that showed Teddi was more involved with the Puppy Gate scandal than she led on, Teddi pointed out that the only thing her text messages proved was that she had told John to bring out Dorit’s dog during the first episode of season nine. Teddi then shared another text message with John, which she claims proves John lied for Lisa on the show.

In the text messages exchange, John tells Teddi he is “stressed,” and calls a situation “f-cked up” as he also wonders how he and someone else (likely Sessa or Teddi) turned into the “bad guys” in the situation.  The exact context of the text messages are however unclear. 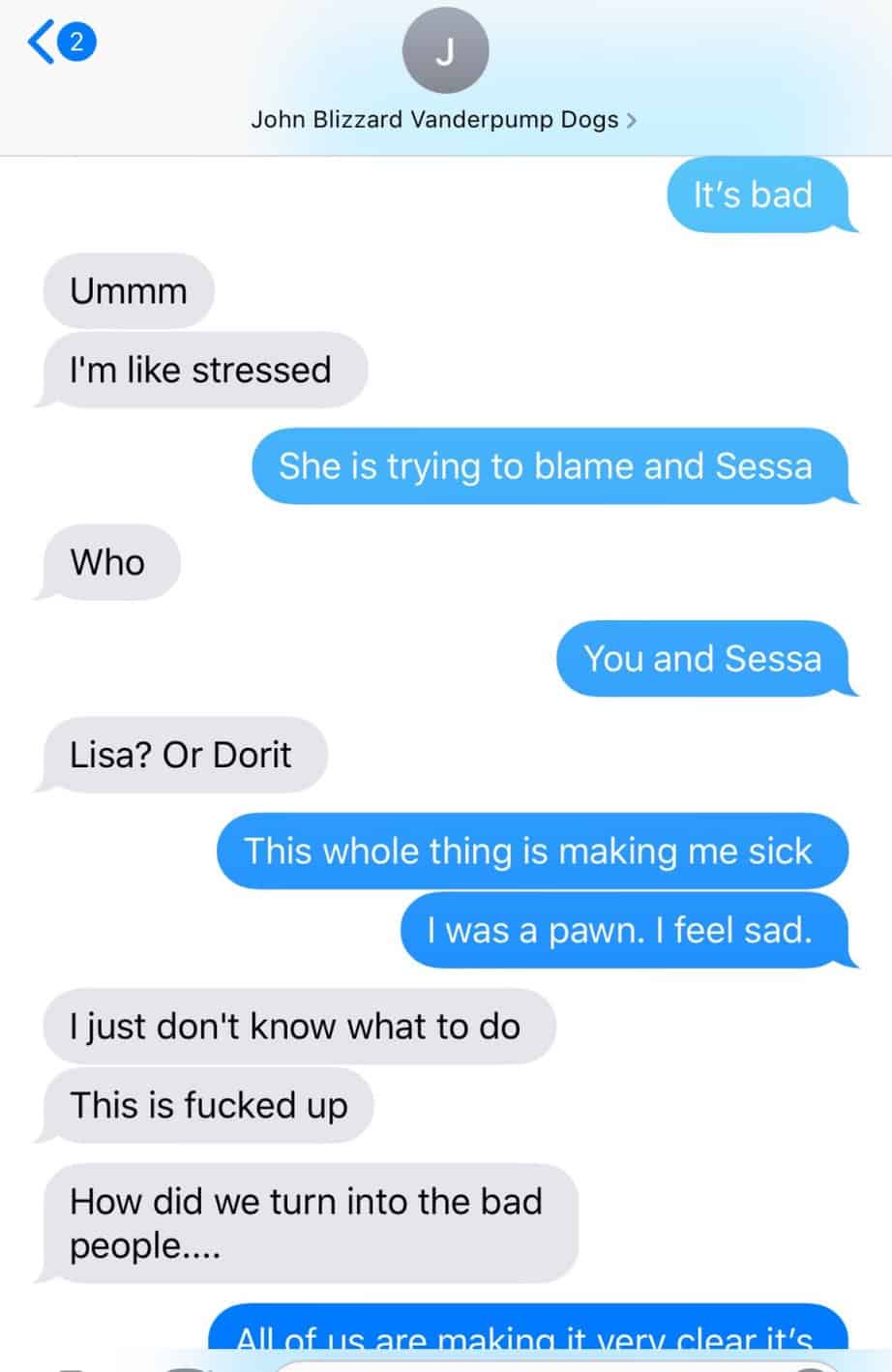 Teddi also pointed out what she felt were more inconsistencies with Lisa’s version. As fans saw on Tuesday, Kyle and Dorit were confused by Lisa’s statement in which she suggested she didn’t know that Teddi knew about Dorit’s dog drama ahead of time, which was followed by a statement admitting she had told Dorit that Teddi knew.

“So you did know or you didn’t know?” Teddi questioned her co-star.

Teddi then fired back at Lisa over her blog from last week, in which Lisa strongly denied being a part of any set up. In her blog, Lisa noted that Teddi never called her to confirm the plans of the alleged Puppy Gate scheme, instead of going back and forth with Blizzard about how to expose the story.

Teddi wrote, “She also insinuates in her blog that I should have called and talked to her. That works both ways, LVP. LVP keeps saying she was trying to protect Dorit— but if she knew I knew, and knew I was coming, and both Johns were filming, shouldn’t she have texted or called me to make sure I didn’t say anything?”