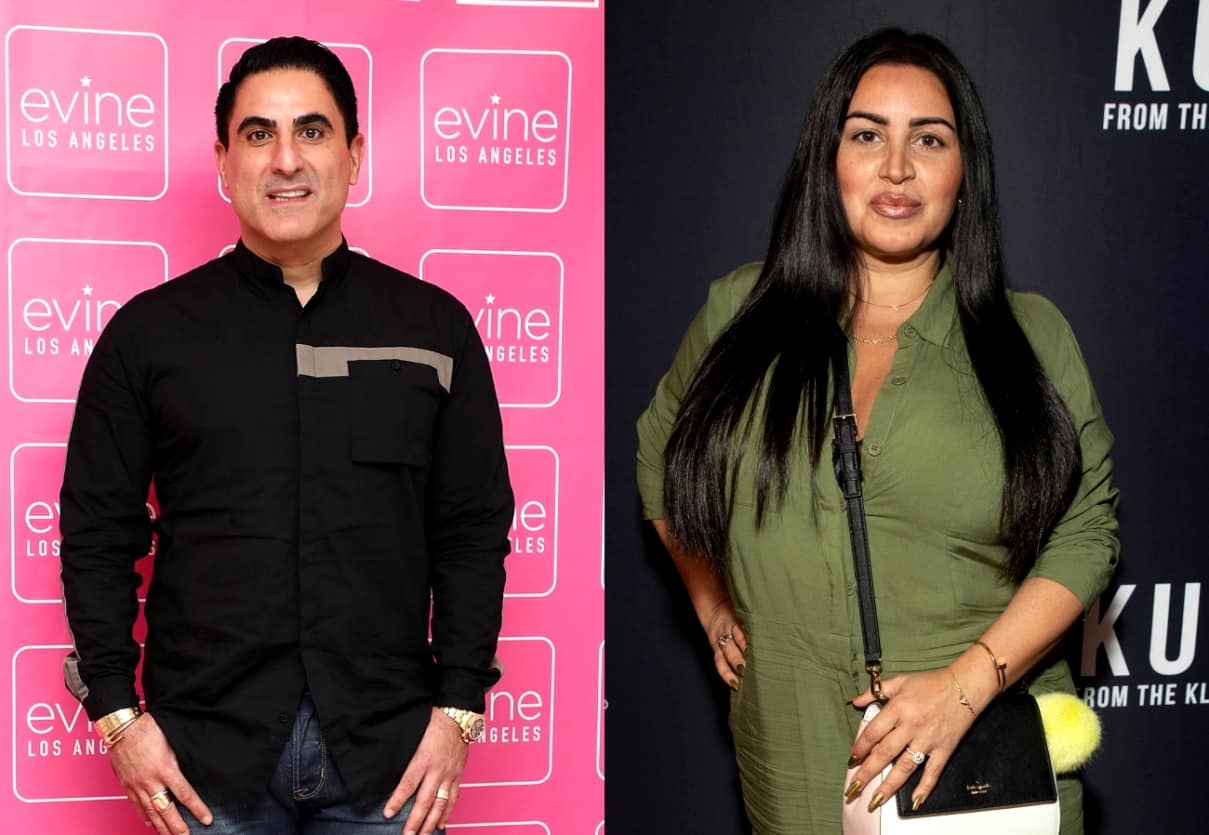 Reza Farahan and Mercedes “MJ” Javid have been immersed in a messy feud for the past several weeks and over the weekend, the drama between them flooded over onto Instagram.

After MJ opened up about their feud and suggested they were fine before she gave birth to her son, Shams Francis Feight, Reza took to Instagram to shut down any swirling rumors which may have suggested that his failure to visit MJ in the hospital was what led to their feud and shared several messages sent between them.

“When you’re evil and plotting against your best friend of 30 years, make sure not to leave receipts in plain sight,” he wrote in his now-deleted Instagram post. “The fact is someone that I loved, cared for and supported allowed fame to get to her head and she came for me while she was ‘dying’ and in ICU. Luckily her health scare passed quickly and she was out and about going to the opening of an envelope.”

Reza went on to say that while he does wish MJ and her baby well, he has no interest in having a close relationship with her at this point. He then suggested it was MJ who was responsible for their falling out and slammed her husband, Tommy Feight, for threatening him.

“If none of my friends came to see me while I was in ICU giving birth I’d look inward. AND TELL YOUR HUSBAND NOT TO THREATEN ME BY PHONE!!!!” he added. 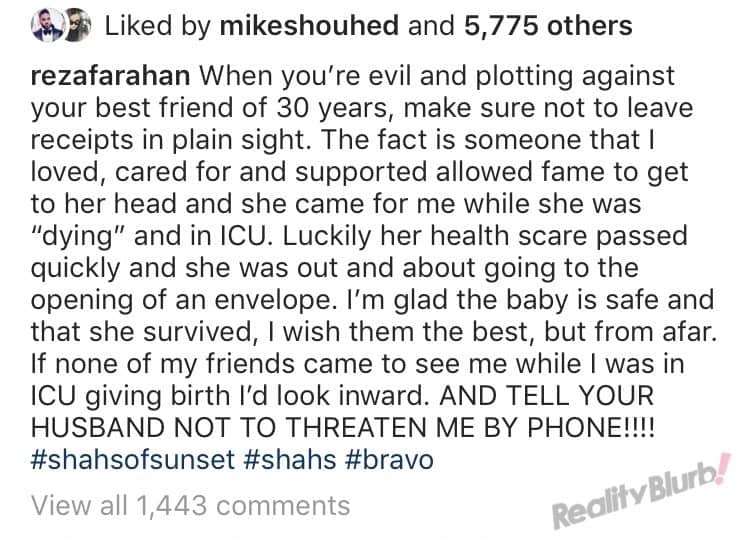 Along with Reza’s post, he included several text messages sent between him and MJ which seemingly confirmed that he made plans to visit MJ after Shams’ arrival.

Following the birth of her baby, MJ gave an interview during which she confirmed she lost a lot of blood during childbirth and almost lost her life. 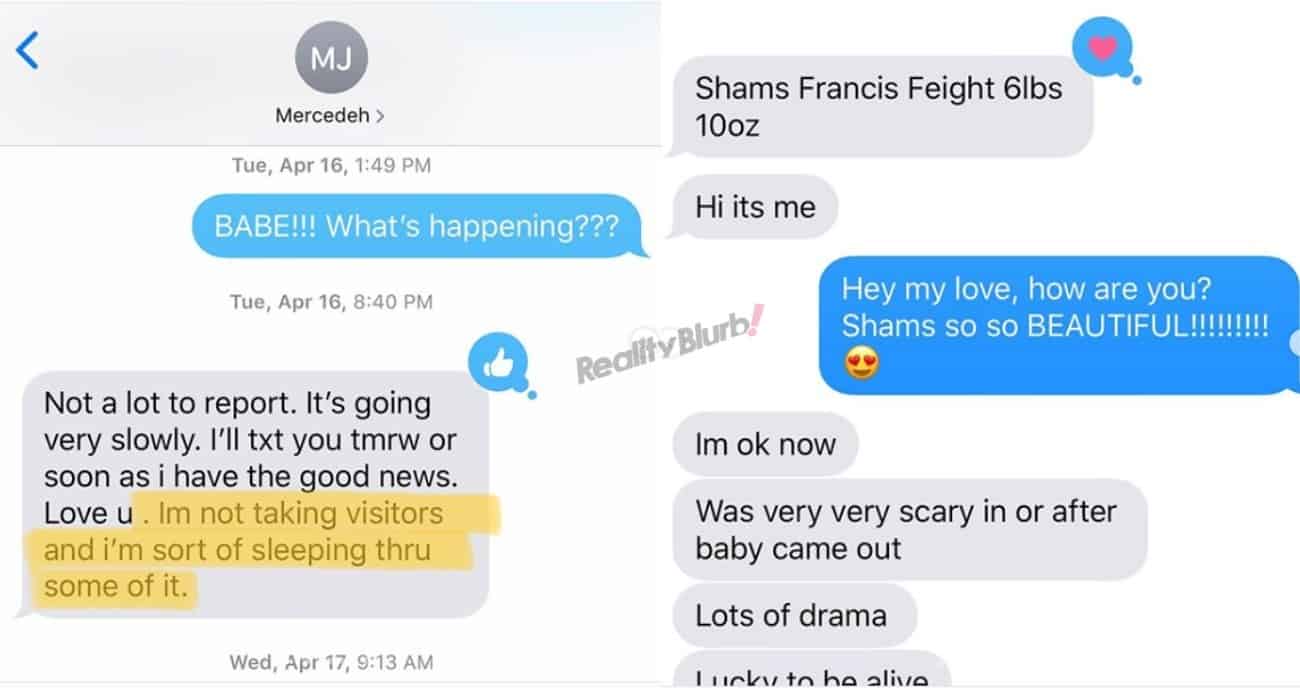 “That’s so scary, I’m so sorry, but thank God it’s over and you’re on the mend!!!! Do you need anything?” Reza asked.

The following day, MJ sent Reza another text, which read, “Hi babe. I got out of ICU today. When do I see you?”

“That’s great! Maybe later today, if you’re up for it?” he replied.

MJ responded that she was up for a visit that day, but Reza didn’t respond back until two days later.

“Are you home? Can I come see you and Shams?” Reza asked two days later. 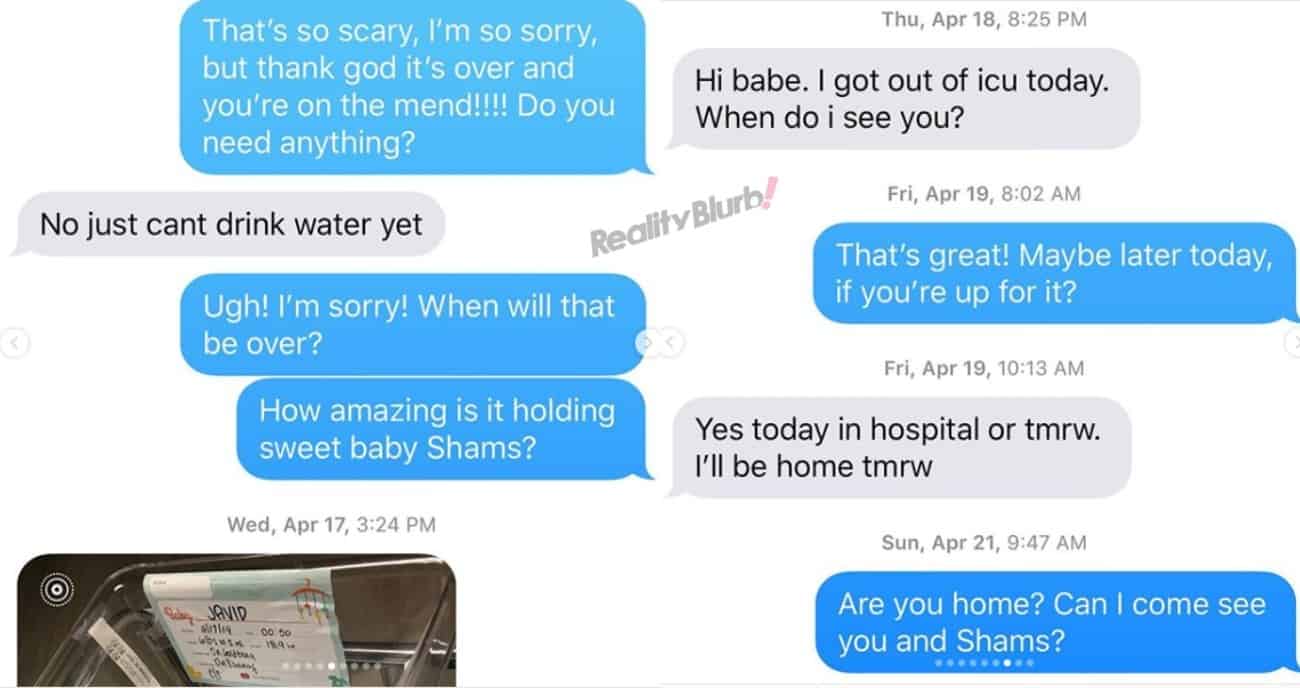 In the final message sent to Reza, MJ looked back on her falling out with her one-time bestie and seemingly confirmed that she will not be appearing on the upcoming eighth season of Shahs of Sunset.

“Hope you guys have a great season without me!! I cannot wait to watch!” she wrote. “I’m truly impressed by the extraordinary level of SELFISHNESS you have shown me during something so serious. But it’s crystal clear now and I appreciate the heads up. I’m declared a miracle to have lived [through] a medical ordeal during 55 hours of childbirth, nearly never met my son, and had over 50 Cedars doctors & nurses come to see with their own eyes that I made it — doctors and nurses who had never even [met] me — ever, came in repeated times.. and where are my f**king ‘friends’?”

“Aside from that, I couldn’t be more grateful for what I have created with Tommy, my rock,” she added. “Despite everything, I still know how to keep it real and still know how to speak up when something needs to be said. Deuces.” 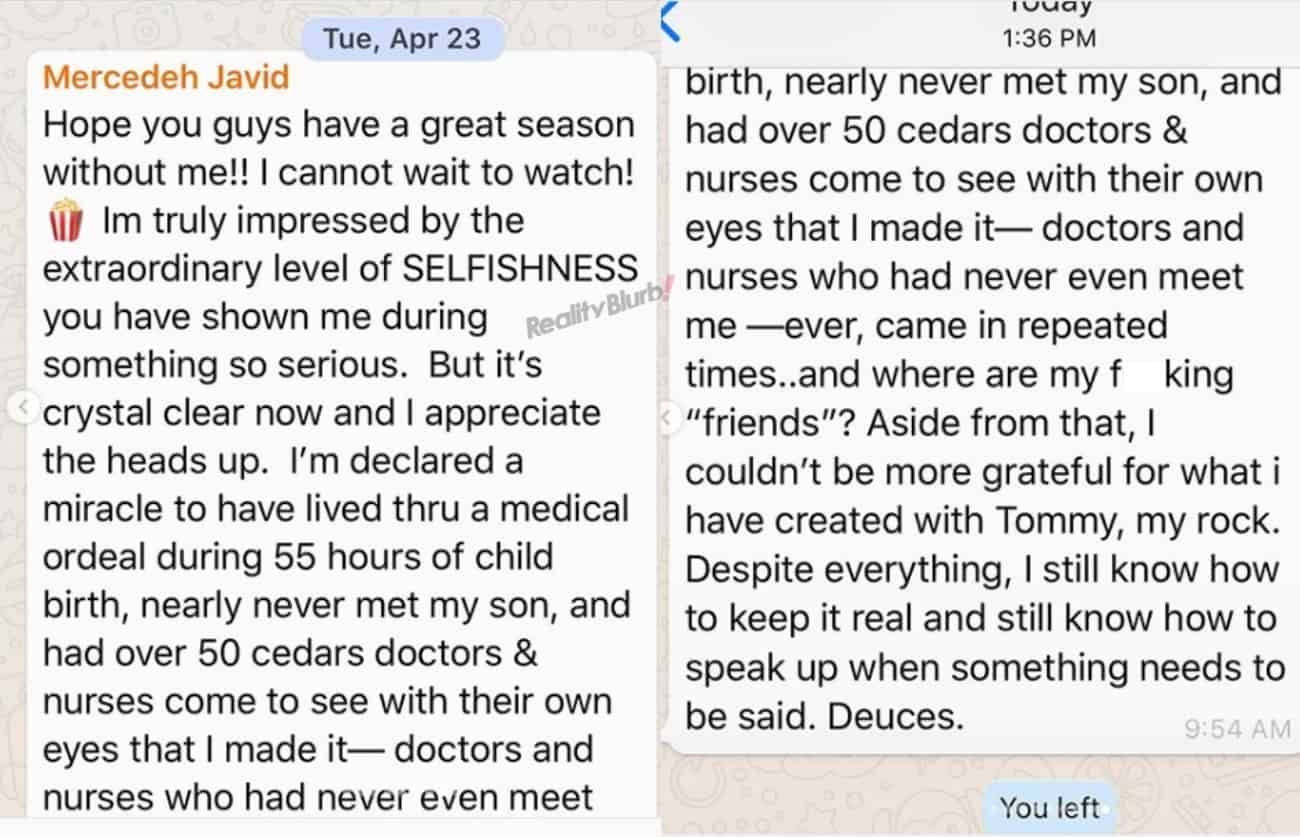 “The Devil has many faces and I’m glad its finally be exposed for the world to see,” she wrote. “Our hearts are with that child. But that’s about it. God is good!”

Shahs of Sunset season eight is expected to air later this year on Bravo TV.