by Julia May 21, 2019 134 comments
ShareTweetWhatsappPinterestRedditTumblrMailFlipboard 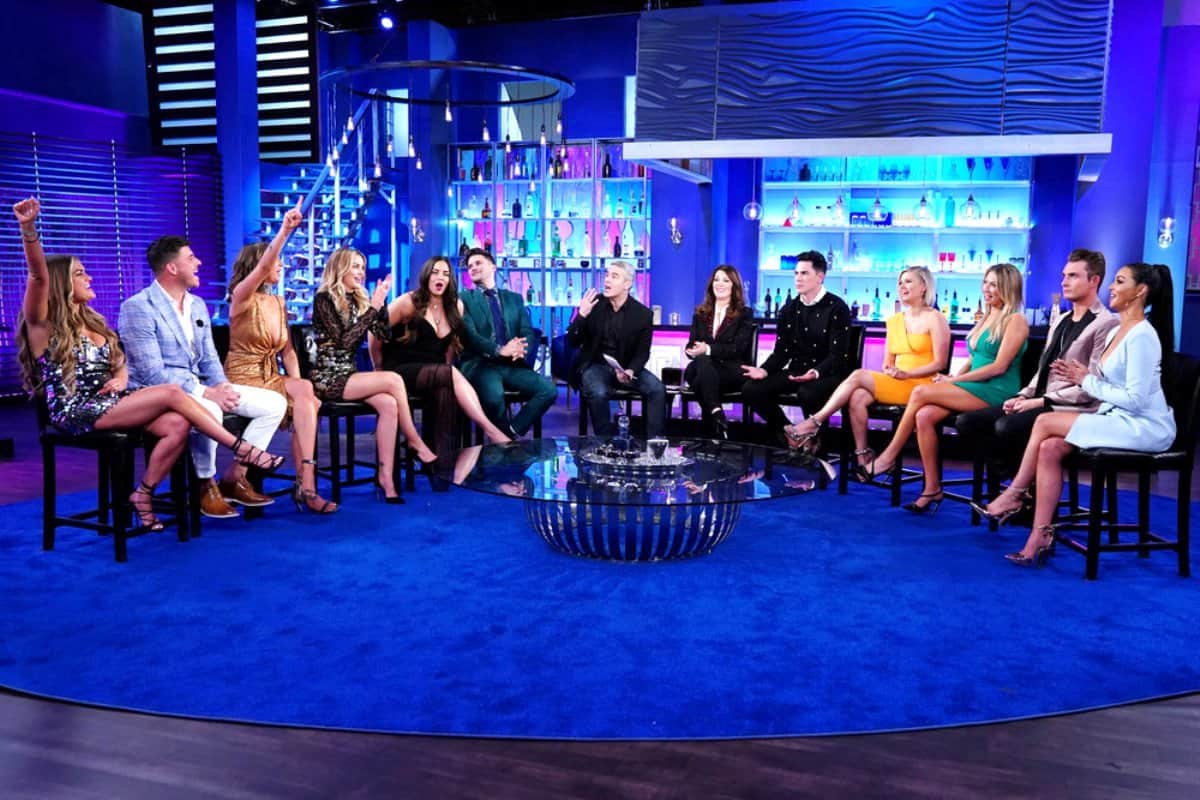 The final leg of the Vanderpump Rules reunion welcomes Beau, Stassi’s sweetie, and more drama brought to you by Kristen and the rest of the crew.  Not surprising…

Part II of the reunion ended with Kristen spitting out that James was “raised by a bunch of f*cking a*sholes” and James stormed off the set. The cast is left reeling, LVP chases after her homeboy, and tells him to stop walking away from the battle. LVP essentially begs him to come back because let’s face it, without him, the drama dwindles and who wants to watch a boring reunion?

And is it just me, or did it not feel like the cast was gaslighting James? I mean, don’t get me wrong, he does have his faults and doesn’t do himself any favors most of the time, but he was being ganged up on, and for some reason, Jax, Kristen, and co. feel it’s okay to insult his family, bash his girlfriend Raquel, but when he retaliates, they react in horror! Bless Andy Cohen and LVP for trying to defend him at times, but even they kept asking him why he was so upset when he had to sit there for hours while being insulted by those who have done worse than he has! Kudos to Sandoval for calling out the cast on their hypocrisy during the reunion.

Katie is furious that she is getting all the backlash for standing up to James this season and states that, “People are telling me to go kill myself.” When James makes his entrance back on set, Andy gracefully changes the topic to LaLa‘s anxiety attacks and she blames them all on the booze. Andy tries to find out why Scheana behaved so bitterly towards LaLa during those dark times and Scheana admits that she is “insecure,” which is amazing because we all already knew that. LaLa and Scheana make up, but I doubt there will be any make-out sessions in the near future.

Schwartzie blames his naivety for inviting James to Mexico. I think we should just call Schwartzie what he really is: a dumb a*s, frightened husband. Ariana points out that Sandoval is always the one who always gets the blame for Schwartzie’s statements that he has to later retract. For instance, when Schwartzie invited James to Mexico, he told Katie that Sandoval extended the invite. When called out for this behavior, Schwartzie essentially admits that Katie’s scary, so therefore, if she says, James can’t come, she’s got the final say.

The real question is, why in the world would James even WANT to go on a trip with these people? He claims he “earned” his stay to attend the group trips, but it sounds like a pretty miserable vacation with Katie b*tching at him the whole time. Schwartzie claims that his “Bubba” has come a long way and has “reformed,”… this coming from the man who gets wiener-shamed by his wife on the reg for his “classic d*ck.”

Beau gets welcomed on set with a round of applause. He’s a real fan favorite, huh? Stassi’s come a long way from her train-wreck relationships (we all learn that Stassi got cheated on by Patrick, her ex-boyfriend) and everyone oo’s and ah’s over their love. Even LVP does, and she goes as far as saying, “I think Beau is very lucky to have Stassi.” Holy awkward!

Kristen actually set up Stassi and Beau. They knew each other from a movie they were in 12 years earlier. The incest of this group continues when we find out that Beau and Kristen had to smooch in said movie. GROSS. Despite the rocky patches, somehow this couple is still going strong. Beau explains that “alcohol…Adderall…” are triggers for Stassi’s dark passenger. Stassi comes clean that she hasn’t taken Adderall since and it turns out that Stassi’s behavior has changed from that moment on- who knew that mixing drugs and alcohol could turn you into a complete and utter beast?!

The rude comments made by Stassi’s wacky mom Dayna come up. Remember when she told Kristen, “I hope my daughter grows up to be half the woman you are?” Yea, that lady is bananas! Stassi shares that she hadn’t spoken to her mom in like 8 months, but they have since rekindled their relationship. Phew.

Andy brings up Kristen’s “interesting” behavior in Solvang, which translates to “you were an absolute hot mess”. Kristen still gets triggered when she hears the name James Kennedy, which is evident, especially on that trip. Contrary to what James thinks, Stassi believes that Kristen wasn’t upset over James Kennedy, but rather over her then boyfriend, Carter. Regarding the Carter/Kristen break-up, Kristen tearfully explains that she wasn’t appreciated by him and decided to call it quits.

Somehow Katie and Stassi become directly involved in Kristen’s relationship and bicker back and forth. Kristen admits that “Carter and I do still live together until I move into my house….” because their dog got mauled by a Pitbull. OMG. I am more upset about the dog mauling than about this breakup. Kristen whines about how Stassi’s “tough love” tactic doesn’t work for her, so therefore, she is hopping from friend to friend until she hears what she wants to hear.

“I don’t like the sound of your voice.” The most classic line of the season delivered by Schwartzie. He states that it was “one last burp of resentment” for all of the things Katie did to him in the past and Katie lets Schwartzie know that he’s not very good at listening. Cuz that’s gonna smooth things over… When asked if the couple made passionate love the night of the junk food seduction, Katie states, “I had Montezuma’s revenge.” OF COURSE you did.

Brittany lets Andy know that she has been planning her engagement since she was like 5 and Stassi refers to her buddy as “Brat”-ny because she will get whatever she has ever dreamed of for this event. LaLa shares that she is now a bridesmaid for the wedding of Jax and Brittany, so that makes what…54 bridesmaids now?? Who is gonna be attending the wedding if everyone this couple knows is IN it?!

I love how the cast goes on and on about Jax’s lies. It’s hilarious to watch him try to keep a straight face as they all rattle off lie after lie, including Channing Tatum being his roommate at one point. Jax claims he is a “work in progress” (7 reunions later…). When LVP compared Jax to her hubby, Ken, Jax sees that as a compliment, but bozo doesn’t realize it was really a dig, as LVP was calling both of the guys’ dogs. HA.

The awkward fight between Scheana and her BEST FRIEND Adam re-surfaces. Andy can’t quite wrap his mind around Scheana’s intentions with Adam, but Scheana tries to make it better by saying she can at least still date younger guys cuz she looks young. Andy lets Scheana know that he thinks Botox makes her look older (burn) and continues to roast her over the penguin purchase Scheana made for Adam. Scheana further shares personal information about her sex life with the world…as if we care.

Andy needs to know if anyone in Brittany’s family ACTUALLY likes Jax. Jax blames “pressure” on his offensive comments and claims that he doesn’t have any family. Andy isn’t taking that for an answer and reminds Jax that he DOES have a mother. As of right now, Jax’s mom is still not invited to the wedding and Brittany blindly agrees with her selfish, jerk of a fiancé. Brittany makes an open plea for Jax’s mom to reach out to her son, while Jax gets emotional.

As Jax cries to Andy, Stassi can hardly stand James a minute longer. She blurts out, “He won’t shut up” and James is on his phone during this emotional tear fest. James is erupting at this point and says that he took his anger out on Brittany because “he felt like it.” When LVP tries to interject and remind James that unless he changes, he will lose support, James questions LVP by asking, “is that a threat?” Who needs SUR when he has “high, high hopes” about his DJ career. My eyes are rolling HARD.

Peter, the forgotten SUR manager, Ken, and beer cheese, all get brought out for the final toast to wrap up the season. Andy asks LVP, “Who will be the first to have a Pump baby?” LVP guesses Brittany and Jax continues his lying streak by saying she already is with a child. Hardy, har, har. She better not be based on the way she threw back that blow job shot… Cheers to this group growing up next season, until then, there’s always social media to keep tabs on their self-destruction and dramatic antics!

TELL US – THOUGHTS ON THE VANDERPUMP RULES REUNION AND THIS SEASON? DO YOU WANT TO SEE ANY CASTING CHANGES?