The Real Housewives of Beverly Hills Recap: Camille Tells Dorit That PK Owes Her Friend “A Lot of Money” 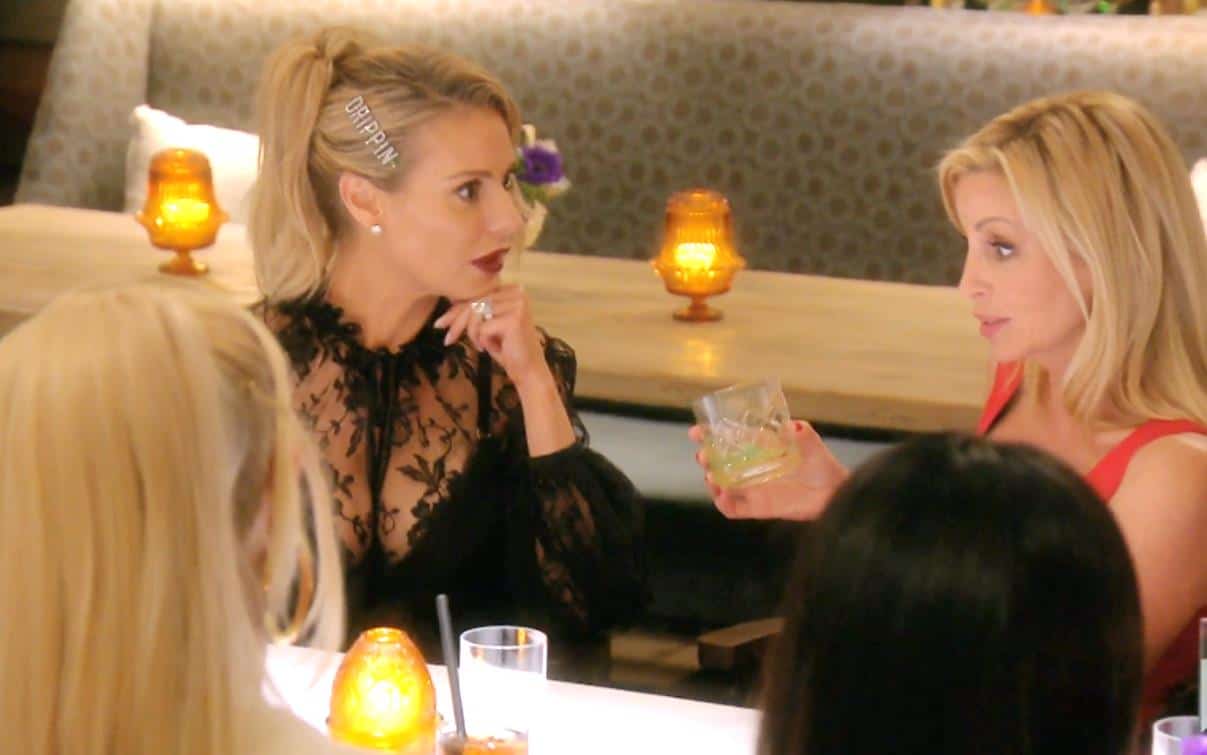 A Kitson launch and a celebration ends in an upset on this episode of the Real Housewives of Beverly Hills.

Ah, the morning after. A hungover Teddi and Kyle try to piece together the events from the night before, and it appears as though Teddi recalls NOTHING. That means Teddi remembers nothing about sobbing to Rinna, nothing about ticking off Erika, nada. Ah, it appears as though someone else is “pretending to have full-on amnesia…” (see that reference to last season??). Rinna is the only one at breakfast with Kyle and Teddi, and so she fills them in on what occurred with Erika last night. The whole “we don’t think Erika enjoys being around us” thing totally warrants an apology now that the girls are sober-ish, but who knows how Erika will react to those two now?

Erika is “disappointed in Kyle and Teddi” and calls last night “not cool.” Rinna checks in on Erika and warns her that Teddi and Kyle feel bad about their actions. The women pretend as though everything is peachy amongst the group and decide to carry on with the day’s activities, despite any tension. Side note: partaking in archery lessons whilst upset with the majority of the group is not awkward at all…note my sarcasm.

Post archery, Teddi pulls Erika aside to apologize for her drunken antics. Teddi makes it clear that one-on-one, she is fine with Erika. But when Erika is in a group, she feels like Erika is cold towards her. Erika, shockingly, accepts Teddi’s apology without much ado. To be honest, I was hoping Erika would put up a tougher fight.

When Erika rejoins the group, Kyle plays with Erika’s hair and tells her she’s sorry for hurting her feelings. I am proud of Erika for telling Kyle she was “out of line,” but once again, she accepts the dang apology. SNOOZE FEST. WWEJD (What Would Erika Jayne Do)?! I bet SHE wouldn’t let these trolls off that easily….

Au revoir, France! The b*cthes are back in Beverly Hills. They are up to their usual antics: Dorit‘s trying to make her hubby eat healthier, Kyle’s redecorating her house with fake-face Faye, and Erika rants to Mikey, her creative director, about the Kyle and Teddi drama.

But enough about that stuff—Dorit’s busy cooking up something BIG. “Kitson’s a landmark store” (didn’t this store go out of business?!) and Dorit is over the moon excited that her fake swimwear line is going to be featured there. After shutting down all its stores years ago, it appears Kitson has relaunched! Dorit shares with her husband PK that she is going to be seeing Camille at her big Kitson reveal and is a little apprehensive about it, considering Camille has been talking smack about her. Dorit further states that the cover-up named after Camille has “holes, much like most of the things that come out of Camille’s mouth.” That was quite witty coming from Dorit.

Later, the ladies get together to see Denise and Camille for the first time since the fires happened. Rinna, ever the saint, has brought two bags full of clothes to gift to the two women who were affected by the fires. Denise explains they had five minutes to get all their stuff out of the house, and I can only imagine how traumatizing that might have been. When Camille arrives, she states that it has been “overwhelming” because on top of losing her home, she is also grieving the death of her assistant, Scott. It’s kinda hard to feel bad for Camille, considering she owns multiple properties. Camille talks about her “husband” as if he exists, and in her confessional she says that Denise is very lucky that her “rented house did not burn down.” SO mean.

The next day over at Kitson, Dorit is unhappy with her window for Beverly Beach and is freaking out in her blue blocker sunnies. Dorit does her best to right the window and prepare for the big debut while Teddi meets Denise shopping, who is in search of some clothes. The girl has no idea what her next steps are in life: with a house, with her clothing, with everything. While perusing the clothing racks, Teddi and Denise chat and manage to spend $300-something dollars on some slinky dress. Typical.

It’s the big debut of Dorit’s Kitson window for Beverly Beach. She’s making it a “thing” cuz that’s what these women do—they turn everything into an event. All the ladies and some of their significant others ogle over Dorit’s athleisure wear and fake excitement for having an article of clothing named after them. Eye roll. The “big reveal” for the window happens when the garbage bag gets torn down and they all toast with champagne. Very snazzy.

Post garbage bag reveal of the Kitson window, the gang piles into a sprinter van and heads out to dinner to continue the celebration. Why does Rinna even order anything to eat? Come on, the jig is up. Naturally Kyle invites the ladies to an event SHE will be hosting for the agency cuz the spotlight has been off of her for FAR too long…

Somehow the convo turns to LVP because I think all of the ladies know just how boring the storyline is without the queen. Dorit explains that no one has seen or heard from LVP. She finds it frustrating that despite the “endless invites,” LVP did not turn up. Rinna lets Camille know that she let LVP off the hook too easily when LVP did not show up to her shower or wedding. From there, things only escalate.

Leave it to Kyle to bring up Camille’s contradictory statements. On one hand, Camille is siding with the mean girls, but to magazines, she sticks up for LVP. Camille claims, “I didn’t deliberately mean to hurt any of your feelings.” Teddi interjects that it’s confusing to hear her say one thing to people’s faces and then something else behind their backs. Camille is not happy to have Teddi jump into a conversation, and she is certainly not happy to hear that Rinna told Dorit about her sh*t talking.

Surprisingly, Camille owns it and tells Dorit that it’s true: she didn’t trust Dorit and didn’t know where all her money came from. This triggers Dorit. Camille outright says to the table that PK told her that he “filed for bankruptcy.” This in turn made Camille wonder where and how Dorit would be able to live the lifestyle she leads. Dorit gets all defensive and rightly so. She defends her husband and explains, “In 2008, his business went bust. He claimed bankruptcy.”

Camille has no intention of stopping now that she got started. “Your husband owes out a lot of money to someone very, very close to me.” Dorit denies it all, but Camille feels as though because Dorit came after her, it’s fair game. The women look on in panic and listen as Camille says she knows “things for certain.” Camille claims to be “protecting” Dorit from things PK may not have been transparent about regarding their finances. Camille spits out, “I know your husband owes $1 million to a company,” and, “it’s bad. There are lawyers involved, too.”

Denise lets Camille know that she has crossed a line and the other women FINALLY jump in to tell Camille she needs to stop. Does Camille need to be reminded that this dinner was supposed to be a celebration for Dorit’s clothing line? Camille really could not have waited to discuss this information in private? In other news, it appears as though LVP will be returning for the season finale next week. PRAISE BE.