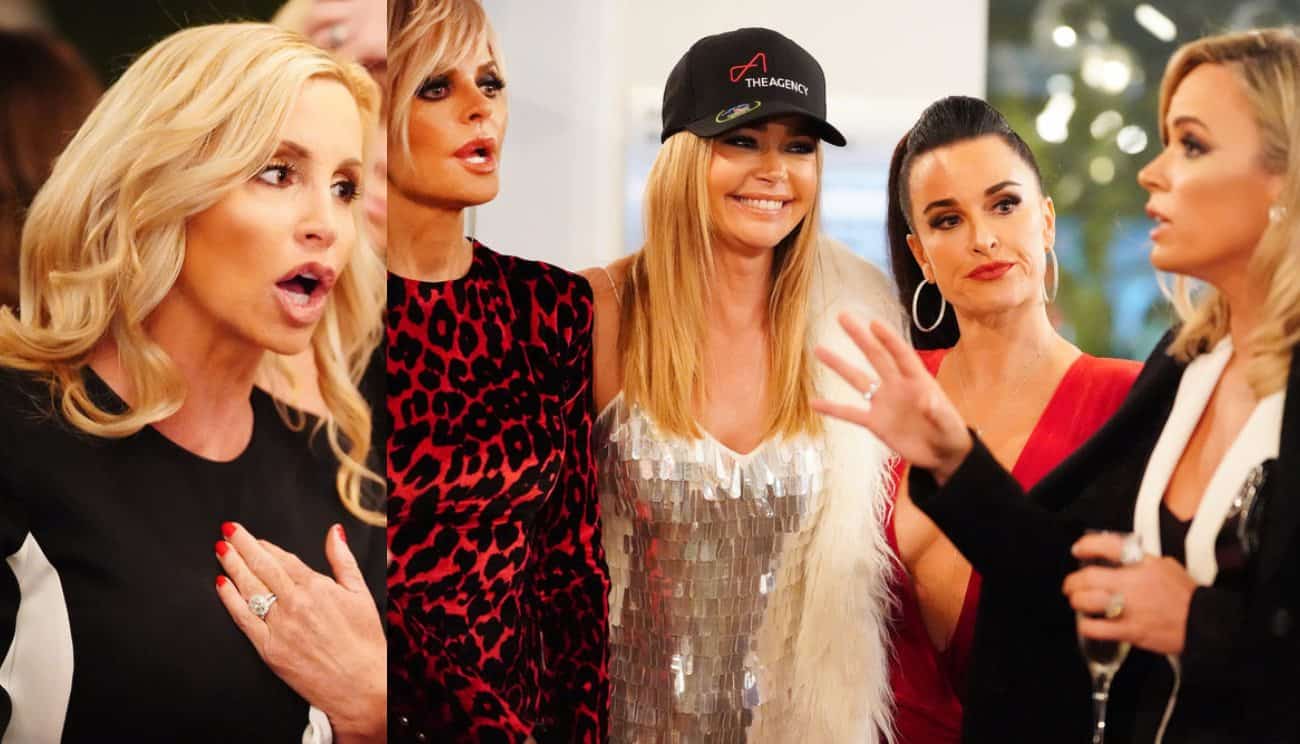 It’s the Real Housewives of Beverly Hills finale we have all been waiting for…mainly because what has this season actually become without LVP?! Let’s hope some issues get resolved this episode, otherwise we are in for a realllllllll treat on the reunion. (You can check out the tear-filled reunion trailer here!)

Sisters of the year, Kyle and Kim, get together now that things seem to be going smoothly. They sit down for some girl talk and Kim awkwardly asks, “Tell me, sista, what’s going on?” I can’t. Kyle proudly shares that her second eldest daughter got a big job at the Agency, ya know, the real estate company her father, Mauricio, runs. What a go-getter. Kyle invites Kim to the big Agency celebration, but she warns Kim that Rinna will be in attendance. Kim fears what may occur upon bumping into Rinna again, but she’s hopeful that the ladies can simply get along.

Dorit, cruising around on her kid’s bike whilst wearing white heels with tube socks (what is up with that?), fills PK in on the money issues that Camille brought up at dinner. Dorit remains irritated by Camille’s incessant questioning of Dorit’s cash flow. PK makes it clear that the bankruptcy occurred back in 2009. Sooo 10 years ago! Hold up—PK has another daughter? Who knew? Because his kid, Atlanta, has just moved back to the states, he cannot attend the Agency party…which means he won’t be there to keep his wife in check.

By the way, did you catch the Reality Blurb shout out?! You can click here to read that story. 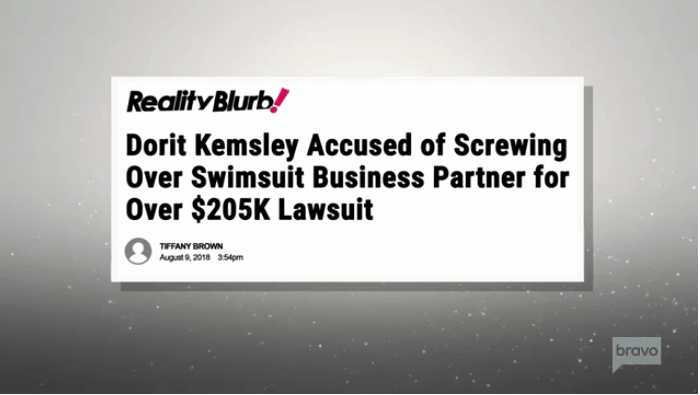 It’s the night of the Agency event and the ladies primp and prep. Despite the rain, the show must go on. According to Kyle, “We’re selling homes and sex.” Right.

“Can we talk about my fierce pony?” Hey, Dorit. A pony ain’t gonna protect you from Camille’s sharp words. Dorit gets scooped up by Denise and her husband, Aaron. Denise and Aaron are currently homeless because of all of the fire damage. The couple have been living that hotel life until they are able to figure out where they want to settle down. Dorit is grateful to have Aaron and Denise with her this evening, particularly because Aaron promises to “protect” Dorit from Camille.

Teddi and her hubby beat Kyle and Mauricio to their own party. Typical. Kyle loves making things about her, but we already knew that. Kyle runs around pretending to be Ms. Agency herself. She says things like how proud she is of “what we have built” as a company. Kyle, you built nothing. You simply wear red dresses that are far too scandalous for the lighting at the party.

“I love a pink wig.” Let’s discuss how Erika and Rinna are both wearing wigs for this party. What exactly is going on and how could Mikey, Erika’s creative director, ok this lewk?!

When Camille comes in with her two random girlfriends clearly to appear as though she rolls deep, she explains that she feels like she is in high school with these women and she is “sick of being on the chopping block.” She is ready to take on any or all of the women who confront her tonight. Kyle fakes excitement in typical Kyle fashion upon seeing Camille. Camille calls the other night “a sh*t-show,” and she says that she is not ok. When Teddi inserts herself into the conversation and tries to share her point of view, Camille tells her to, “Shut it down. You’re not worth my time.” Woah. Camille certainly came in guns blazing. Teddi, unsure of WHAT to do, retreats like a puppy with her tail between her legs.

Teddi bumps into Rinna and Erika, the wig twins, as they enter the party. She lets the girls know that Camille is coming in hot and Erika looks ready to kick some a*s. (Holy smokes! Is that Camille’s husband? So he DOES exist.) When Rinna asks to have a chat with Camille, Camille simply says “no.” Rinna looks taken aback by Camille’s sudden change of heart. Camille says, “I actually got my balls and realized that after thinking about it I don’t have to say I’m sorry” for siding with LVP and saying nice things about her, despite what the group may think. Rinna can’t seem to fathom Camille’s reasoning, but she tries to explain that she is empathetic towards Camille’s situation. Camille calls Rinna the real mean girl, which is not entirely wrong, just a bit disconnected from the issue at hand.

In the meantime, Kyle grabs the mic to make a speech, because she clearly believes that this Agency party is about her. She manages to congratulate her hubby, as he went from seven agents to 485 agents. Pretty impressive. Eventually, Kyle shares the microphone with the guy who made it all possible, and as Mauricio finishes his speech, Camille confronts Dorit to apologize. She gives a pretty heartfelt “I’m sorry” to Dorit, but Dorit isn’t entirely sure she should accept Camille’s words.

Just when it seems like Camille is coming down from her aggressive behavior, she turns to Teddi and says, “Teddi, you have been so annoying to me.” Camille takes this time to let Teddi know she does not appreciate Teddi snubbing her daughter in the airport. Huh?! She claims that Teddi has a hard time being accountable for her actions and when Denise gets herself involved Camille insists that Denise “back off.” I love the guy in the beanie in the background watching the women go tit for tat. Who is he and why is he not jumping in? Once Camille feels like she has picked enough fights for the evening, she tearfully heads out. “I just lost my house and my assistant.  I’ve had enough.”

Despite the Camille upset, the party goes on. Kind Kyle brought all of the Provence wine to the event so that Denise, who was unable to attend the girls’ trip, can partake in alllll the fun they had. Note the sarcasm please.

Six months later…. Kyle hosts a brunch for her girls . Seriously, how many of these have we had this season?! You almost get the sense these women spend 80% of their time talking about LVP, and the remaining 20% hoping someone else brings her up so they can bash her some more! But I digress.

Everyone is bright and bubbly and SUPER excited to see each other. Naturally, it doesn’t take long for someone to bring up the woman, the myth, the legend: LVP. Dorit asks, “Did you see her in Vegas?” LVP has opened up yet another successful restaurant in Las Vegas and that means that these ladies have yet another reason to be green with envy.

(We get a glimpse at six weeks earlier. We are treated to Camille kissing LVP’s a*s, yet again, and therefore, we find out that Camille attended LVP’s restaurant opening. Someone needs to tell Camille she is never gonna be a full time cast member on this show…)

Rinna spills that she ran into LVP at a parking garage and Kyle lets the girls know that she, too, had an encounter with the queen. Kyle explains that LVP was shocked to bump into her and that Kyle apologized for their fight. Kyle knows that “nothing is going to change” when it comes to LVP. LVP is never going to say “I’m sorry” and she is certainly not giving Kyle the opportunity to make things better. Kyle finally admits that she was essentially a try-hard in her relationship with LVP. As the season comes to an end, the women go around the table and share the recent happenings in their life, but no one will ever measure up to LVP, no matter how hard they try.

Denise- Moved to Brentwood, is still talking about “happy endings”…and hookers, I am sure. Boring.

Teddi- “I made a mistake when it came to Dorit and the dog situation.” You can say that again, but on a positive note, it did make you a memorable persona this season. Annoying, but memorable.

Rinna- Continuing to live vicariously through her “model daughters,” still not going camping with Harry Hamlin. Trying out new hairstyles on the reg. Trying to stay relevant. The usual.

Erika- It’s all happening for her. That’s it.

Dorit- Still on the hunt for a new home (probs cuz they can’t afford to pay their bills, according to Camille). Beverly Beach is somehow still thriving. Go figure.

Separately, we get a peek into the life of LVP once again—YAAAS. Having her back, even for a brief moment, is exciting. “Lisa has many crowns to wear,” but she’s in no hurry to fix things with the girls, and can you blame her?

The trolls toast that the “best is yet to come” and I have to stifle a yawn. Some finale.

TELL US – WHAT ARE YOUR THOUGHTS ON THE RHOBH FINALE?