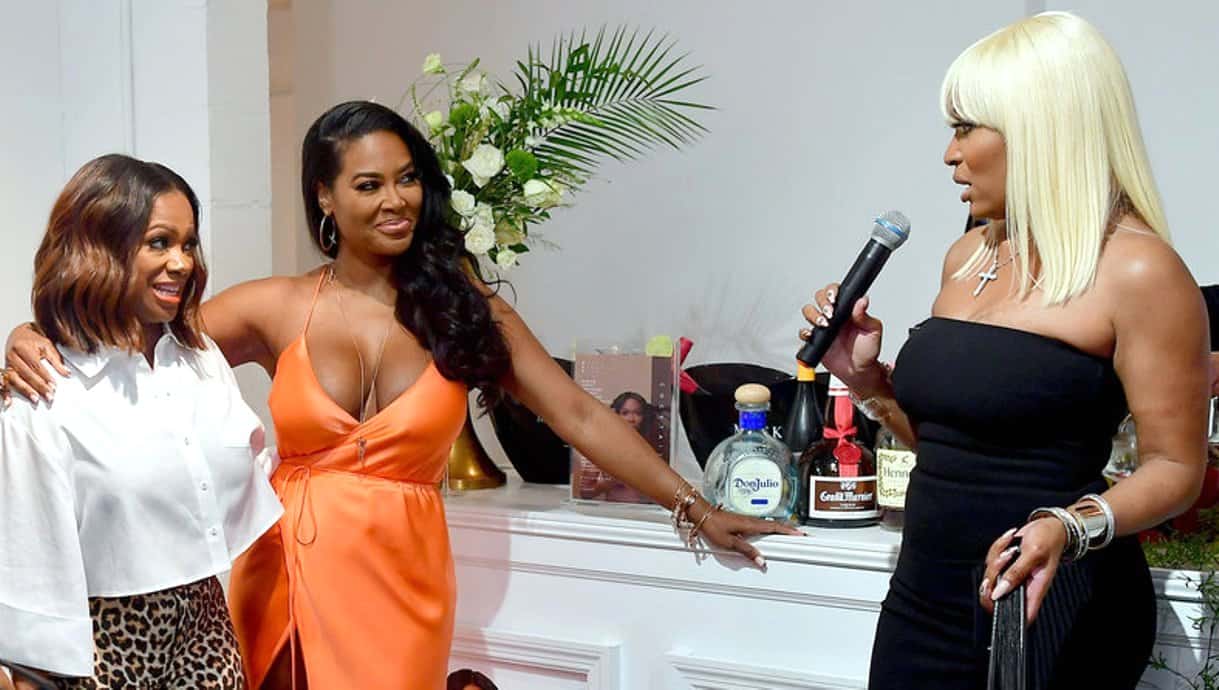 This week on The Real Housewives of Atlanta, we are going to Marlo’s wig launch party and Kenya is going to crash it in an obnoxious way…..

Porsha and Tanya are meeting up to do yet another cosmetic enhancement. They are having a procedure that shocks your abs and makes you feel like you are going to poop? Porsha is laying on the table pretty much spread-eagle getting zapped, and it looks really strange. Tanya talks about a future trip to have some fun and leaves the room. She re-enters the room in a full-blown “Carnival costume” that is worn during Toronto Carnival. Thirsty much?! Porsha says she cannot wait to go to all of these places to shake her butt.

Kandi and Todd are playing a fancy Connect 4, and Kaela comes into the room to talk about their recent trip to London. Kaela wants to move to New York to be closer to the fashion world so she can immerse herself in it. She then says, “Todd doesn’t show any emotion unless he is mad at her.” She feels like he doesn’t praise her and he is too unpredictable. They apparently can go for weeks without talking when they don’t agree on stuff.

Kaela doesn’t get the emotional support from Todd. Todd withholds affection to make her stronger, but it seems to have the opposite effect. He seems like he wasn’t aware he was making her feel that way and says he will do better. Kandi has concerns that Todd doesn’t know how to relate well to girls. That may be some foreshadowing since recently he was out clubbing late into the night and not spending time with their new daughter…

Kandi and Nene meet up as Nene realizes she has no one else to film with! Nene does share some good news! “Gregg is cancer-free” and she is no longer a whiner caregiver! Nene then goes on to joke about the insane and horrific rumors (which Dennis has denied) regarding Dennis and pets as she gossips about Porsha’s split from Dennis.

Nene shares that she and Cynthia saw each other in NYC. Production shows all of the clips where they are both talking smack about each other. Nene told Kandi that conversations were recorded where Cynthia is talking about Nene like a dog. Nene is acting smug since someone surreptitiously recorded Cynthia? Does Ms. Leakes know it’s a crime to do this without someone’s consent?? Nene tells Kandi she has a life coach, oh my stars… Is this really for the anger management issue since she assaulted a cameraman last season???

Cynthia recruits Kandi and Kenya to help her to design a new closet. This is a really manufactured scene to get these three together! Kandi shares with Cynthia and Kenya that Nene has a “Life Coach”?? Kenya thinks she needs divine intervention. What could she possibly be getting coached on and who is that future domestic violence victim unlucky person who got that job? A REAL life coach discusses goals and develops strategies to implement them. Can you imagine this poor person who has to “guide” Nene and give her constructive criticism? I hope they have good health insurance and workmen’s compensation because they will need it!!!

Kandi shares with Cynthia and Kenya that Nene has receipts to prove the trash talking. Kenya says that the production assistant sly dog needs to step up and own what they shared. Cynthia admits she has been talking about Nene but only in retaliation to Nene’s trash talking about her. Cynthia says that when she was up Nene’s a** she was Michelle Obama to her????? I don’t think Michelle Obama would appreciate that comparison!!

Eva calls Cynthia and says she was invited by text to the wig launch but she ignored it. Cynthia says that she doesn’t think this endeavor is in “Marlo’s wheelhouse.” Oh, the shade! She tells Eva about the recording and they come up with suspects, specifically Yovanna and Marlo.

Porsha and Tanya are driving to the event and talking about Nene. Nene was pissed off at Porsha over the closet incident. She took it to another level with some really nasty text messages about Porsha’s body after having the baby. Someone will have to explain to me what “bye ankles” are. Porsha had enough of it and posted all of them on social media! Boom! Good for you Porsha for exposing her nastiness!

The ladies arrive at the wig launch and there is also a “wig wall” for the seven days of the week. Cynthia comes in with a “Tina Turner” looking wig which she can pull off. Kandi boldly asks Yovanna, “Did you record Cynthia”? She claims she is not a thirsty spy. Hmmm, I am not so sure about that one.

Marlo starts the event by calling it a “hair installation???” When Nene arrives, she comes into the room and the camera is like in slow motion mode trying to make it appear more dramatic. Really? They all knew she was coming, right? Marlo makes a big deal out of Nene arriving by announcing her arrival like she is the queen! Nene does a “duck and weave” around Porsha and Cynthia. Porsha refuses to engage with her at this point…in fact, Nene is mostly ignored by the ladies. It seems like I’m not the only one over her drama!

Marlo has a wig styling contest between Nene and Porsha totally preplanned to create drama where they are given five minutes to give “the best black curl to a wig.” Porsha is actually making an effort to win the contest while Nene is just hemming and hawing pretending to style the wig while complaining about the haircare tools. We all know Nene doesn’t do her own hair. She definitely has a person who despises her based on some of the wigs she has worn stylist.

While the contest is going on, in comes Kenya with a freaking marching band?? I am all for advertising your own product, but marching into someone else’s shindig holding signs advertising your stuff is just plain messy. The band is chanting “Kenya for haircare” and carrying signs that say “Your edges matter.” Okay, I’ll admit that is kind of a catchy slogan!

Kenya says Marlo is “bald-headed back to the end of her skull” so she has no interest in showing respect to Marlo’s event. She is cold and goes for the jugular. Marlo makes it seem like it was a totally set up scene she wasn’t taken by surprise and introduces Kenya. Kenya takes it to another level, saying Marlo has a uni-boob, and they both insult each other’s eyebrows?? Marlo rips the drink out of Kenya’s hand and is calling security to escort Kenya out of the event.

Did somebody forget to pay for security? Because no one shows up to escort Kenya out of the event. Marlo then loses it and allows Kenya to see her sweat as she instructs everyone to “diss” Kenya. Yikes!

The drama isn’t over as Marlo and Yovanna start chanting “No more Kenya Moore we want you to go.” The chant is even more cringe as hardly anyone decides to join in.

Realizing she is not the center of attention, Nene decides to throw a temper tantrum and exits stage right with Yovanna chasing her car. Perhaps proving just how little she thinks of Yovana, Nene threatens her by saying, “If you touch my car window I will f**k you up!”  Yovanna, however, is so thirsty doesn’t want her to leave. Nene leaves because she claims she didn’t want to fight it out with Kenya and her two-piece band!

Kenya leaves with Marlo yelling out all kinds of low blows. “Baby daddy gone when baby is less than a year old,” “Go cover your gray edges.” Kenya justifies her messy behavior by saying “I am a businesswoman.” I don’t think this type of crazy marketing was taught in business school. Let me know in the comments where you stand in the hair care battle…

Also, my biggest question from this episode is, WHO IS SPILLING ALL OF KENYA’S TEA ABOUT HER MARRIAGE TO MARLO? Marlo seems to have lots of details about what is going on in Kenya’s home. Hmm.

Next week’s episode has Kandi sharing that Todd is not talking to his daughter again and there is more drama to come with Dennis. We are also meeting Nene’s next victim life coach… Good times!