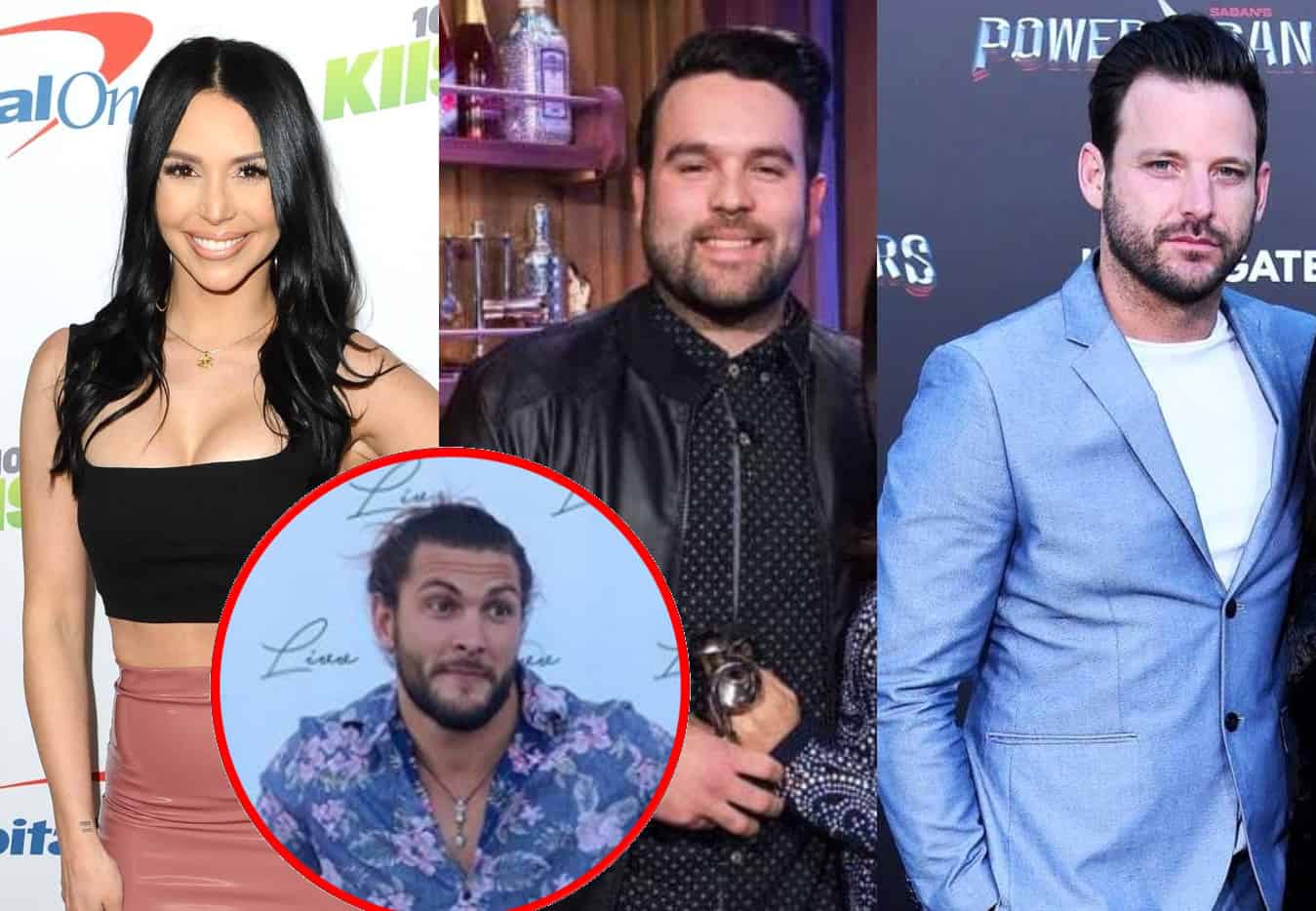 Shortly after going public with their relationship ahead of the Vanderpump Rules season eight premiere, Scheana and Brock appeared together on Scheananigans. While on the podcast, Brock shared his thoughts about Scheana’s ex-boyfriend, Robert Parks-Valletta, and threw some shade at her ex-husband, Mike Shay. Then, the couple opened up about their recent run-in with Rob at a concert in Los Angeles and addressed the “no photos” policy at TomTom.

“[Rob]… the seven-minute ex… He’s a good guy,” Brock joked, giving a nod to the infamous moment in which Scheana gushed over Rob’s ability to hang a television in just seven minutes.

“Seven minutes, thanks, mate. We can touch that one later… It’s a soft subject for me, for sure,” he continued.

“I had just never really been with a man who hung up anything,” Scheana explained.

“You just haven’t been with a man,” Brock noted as he seemingly threw some shade at the reality star’s ex-husband.

According to Scheana, Mike, who she was married to for four years, was a “great person” who she “loved,” but when it came to the upkeep of their former home, she was the “handyman.” So, when she started dating Rob, she was admittedly impressed “by the dumbest, littlest things.”

“I felt like I needed to overcompensate and shove him down people’s throats because I’m like, oh my god, look, I’m with a man and he’s older and he does all these things. And I just bragged so much. It was so annoying,” she explained.

Meanwhile, with Brock, Scheana doesn’t feel the need to talk him up.

“With Brock, I’m like, ‘He’s amazing, he’s not going anywhere, so stay tuned,'” she shared.

In addition to spending time together at BravoCon in November, Scheana and Brock also enjoyed a night out at a Brice Vine concert, where the two of them had an interesting run-in with Rob.

“We are there to see [Brice]. [Brice is] also a mutual friend of Rob’s. I know he’s going to be there. I know it’s a small VIP area. I know we’re gonna run into him,” Scheana recalled.

While run-ins with exes aren’t always the most pleasant encounters, Scheana said things between herself, Brock, and Rob couldn’t have gone any better. Looking back, Scheana revealed that after coming across Rob and his cousin in the VIP section, Rob’s cousin proceeded to gush over Brock to Rob, claiming Brock is a “legend” and “the man.”

“It was so funny that [Rob’s] own cousin was hyping up Brock,” Scheana said, adding that Rob was “so rattled” that he dropped his drink on the floor. “The whole show I made sure that we were standing in front of them and then I had Brock put me on his shoulders, so they had no choice but to look at us.”

“I’m actually glad that that happened, especially the way it did because I did realize I was still harboring some anger and bad feelings towards him, and that’s all gone,” Scheana continued. “I’m happy now, and it was just a great interaction.”

Although Brock has been introduced to Scheana’s co-stars and is now part of the Pump Rules world, at least off-screen, he didn’t know who she was when they first met.

“I thought she was cute,” Brock said as he looked back on his initial encounter with Scheana. “The next day, I had to figure out who she was because I didn’t know anything about her… I slid into her DMs and then we hung out. From the get-go, it was just fun. It was easy and it was good.”