Home Real Housewives of Atlanta News RHOA’s Kandi Burruss Claps Back at Porsha Williams After Porsha Calls Her Out Over Kenya and Tanya Drama, Plus is Kandi Afraid of Being Fired? And Her Salary is Revealed!

RHOA’s Kandi Burruss Claps Back at Porsha Williams After Porsha Calls Her Out Over Kenya and Tanya Drama, Plus is Kandi Afraid of Being Fired? And Her Salary is Revealed!

Kandi Burruss is firing back at Porsha Williams while also reportedly thinking ahead to a potential firing from The Real Housewives of Atlanta.

Following the recent exits of The Real Housewives of Orange County‘s OGs, Vicki Gunvalson and Tamra Judge, Kandi is said to be concerned about her future on RHOA as she reportedly takes steps to ensure that she and her family remain on television in the coming years.

But first, Kandi had a texty exchange with Porsha on Instagram this week. Porsha called Kandi out for failing to have an opinion about Kenya Moore‘s decision to bring the “Cookie Lady,” aka Shiana White, to confront Tanya Sam during a lunch outing with her claims that Tanya’s fiancé Paul Judge had tried to hit on her.

“Overall, how I feel about the situation? I don’t really know if I have an opinion. Overall, that was some drama,” said Kandi in her YouTube review of Sunday’s episode, although she later referred to Kenya and Cynthia’s actions as “shady.”

After TheRealHousewivesofAtlanta Instagram fan page shared Kandi’s clip, Porsha responded and called out Kandi for failing to have an opinion on Kenya’s actions. Perhaps Porsha was looking for Kandi to call out her friend Kenya for bringing Shiana to the lunch to ambush Tanya.

Right away, Kandi fired back at Porsha, writing: “No opinion says I don’t give a f–k. Giving you clarity just in case you trying to read too much into that.” 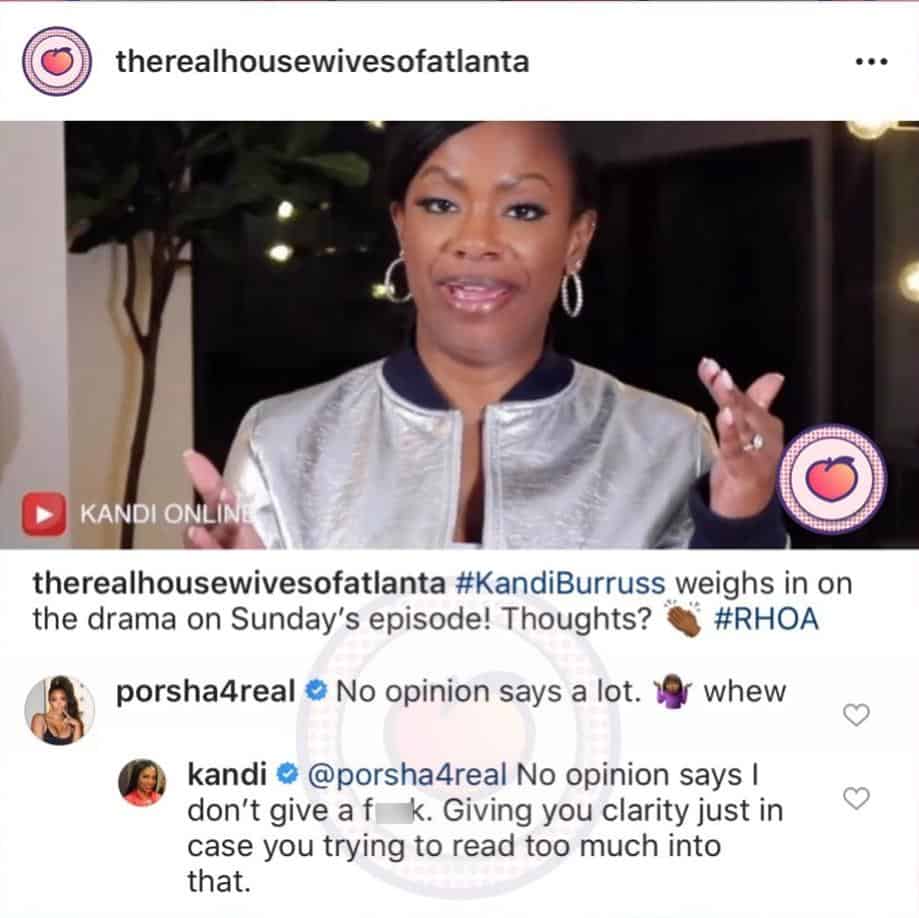 As most RHOA fans are aware, Kandi and Porsha have come a long way since they had a very nasty feud years ago regarding some false allegations Porsha made against Kandi. Since then, the ladies appeared to be on better terms, but they did bump heads last season after Kandi tried to warn Porsha about her current fiancé Dennis McKinley being linked to numerous women.

In more Kandi news, a new report is claiming that she is now desperate to secure another spinoff on Bravo amid fears that this season on RHOA might be her final one.

“She is worried that her time on RHOA is coming to an end,” an insider explained to Radar Online on February 11. So, Kandi “pitched a spinoff show about her growing family and her businesses.”

“Mama Joyce, Todd [Tucker] and her manager, Don Juan, are all on board,” the source added.

According to the report, Kandi, who is part of the successful R&B group Xscape, is the second highest-paid cast member of the show with a supposed season 12 salary of $2.3 million. She has an alleged net worth of $40 million, which makes her one of the richest women on Bravo.

“Kandi wants to stay on TV, and she thinks her own family drama is something that viewers would want to see,” the insider noted.