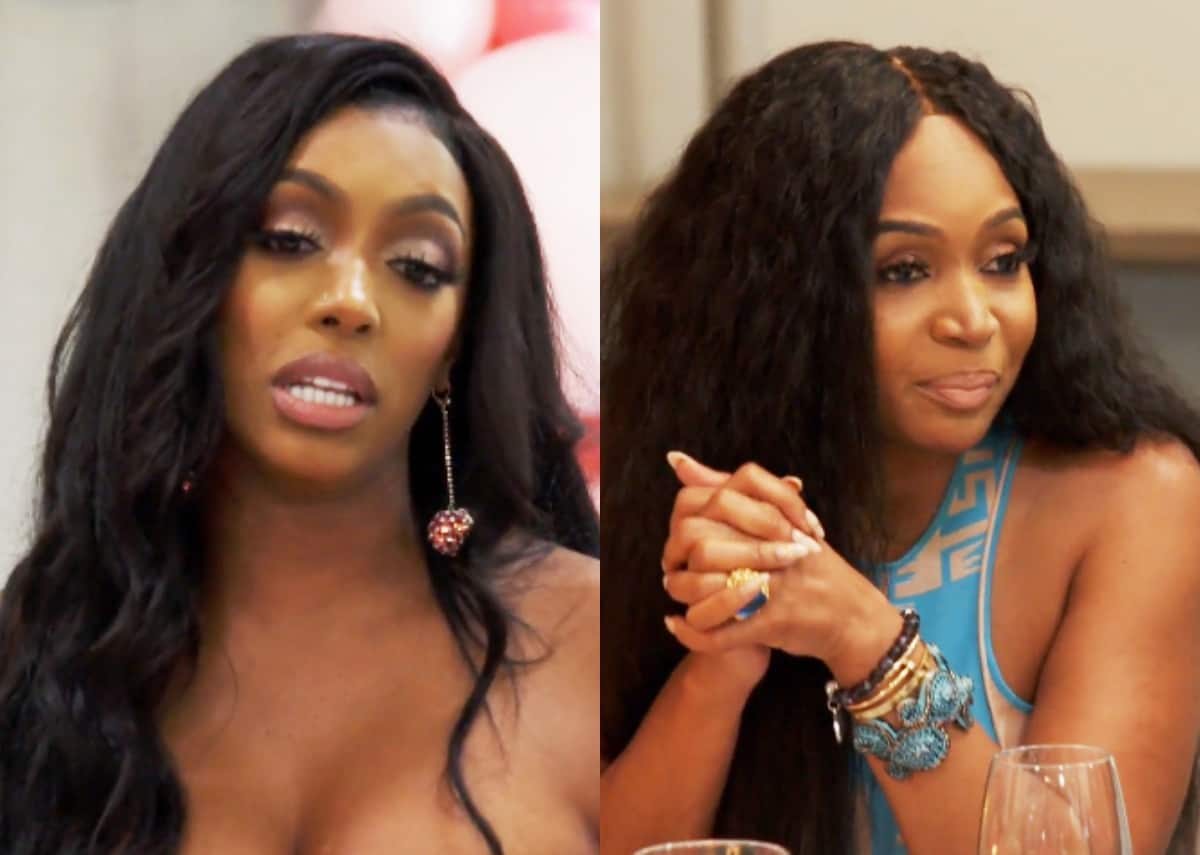 This week on the Real Housewives of Atlanta, we join the ladies back in Atlanta after their Grecian vacation. Porsha and Marlo open up about their loss and Kenya has to face the consequences of her broken relationship. Also, Kandi’s family is feeling neglected over her busy schedule. Let’s dive in and take a big bite out of this Georgia peach!

Nene is catching up with her hubby Gregg. She is wearing some long blonde jacked-up wig that frankly looks like a mess. Gregg is doing much better since he is cancer-free. He has been working with the cancer society. Great job, Gregg, helping out a good cause.

Nene shares how the trip was awesome in her opinion. She wasn’t a fan of Kenya. Nene admits she was over-served when she and Kenya went at it. She shares how hypocritical Kenya was over meddling in other people’s relationships but hers is off-limits. Truth. Gregg thinks she has given her the whole freaking olive tree so just quit trying and move on. Agreed.

Kandi is chatting with Todd while packing for her trip to Chicago. Todd is not super excited about his wife getting it on with someone else on her new show.  Kandi has baby Tucker coming in seven weeks. She is juggling a lot before the baby is born.

Kandi wants them to get some therapy since they have a lot going on in their lives. Todd doesn’t want her to be whack. He is willing to go talk with a professional since he is obviously played out. Todd has all of the responsibility at home now. We will have to wait and see what comes out of that session.

Cynthia and Nene meet up at Swag. They both are dressed alike in their leopard print. Are they channeling Tiger King’s Carole? If you haven’t seen it, please check it out! It is literally off the chain. Sorry, I got off track. Cynthia gets to show Nene, aka HBIC, her impersonation and it is pretty spot on. I love how she said the part about her holding on to that peach for life and taking it to the coffin. LOL, that was some good stuff. Bravo, Cynthia!

Porsha pulls up as the ladies are exiting the building. She invites the ladies to her event. She is a celebrity ambassador for the March of Dimes. Porsha will be hosting this event. Maybe they can all get together and behave themselves for a good cause? Fingers crossed!

Kenya goes to her estate planner to let her know the current status of her marriage with Marc. It is dunzo. She is concerned about Brooklyn’s future.

Kenya wants her aunt Lisa to handle her trust if something was to happen to her. She doesn’t want Marc to have access to the money for Brooklyn. Kenya claims she is better off financially and wants to protect her assets. She basically doesn’t want Marc to get anything now that they are divorcing. The only thing that man did right IMO was providing some sperm to make that beautiful little baby, Brooklyn.

Todd and Ace FaceTime with Kandi. That sweet little boy is crying for his mama. Kandi, run home to that precious little boy! You need to stop this juggling act — you are not in the circus for goodness sake!

We finally get to meet Baby Maverick! He is a beautiful little boy. Congrats, Eva! Maverick was her shortest labor at 22 hours? Yikes! Eva wants five kids! She might want to rethink that one. She is having photos taken and they are absolutely adorable.

Cynthia comes over to see the baby, and she can’t wait to get her hands on him. I can’t blame her one bit. Eva shares she finally got the perfect home for her growing family. Cynthia shares the wine shade that Kenya threw in Greece. She also fills her in on the spitting situation. Eva thinks that is justification for throwing hands! I guess Nene thought spitting was more effective. I thought it was frankly just plain classless.

Porsha has her March of Dimes event. It looks really beautiful and what a great cause. She is an ambassador for the charity. Porsha is shocked Nene came to her event. Nene in her usual white “reading the tea shirt” comes in spilling some shocking tea about Marc allegedly having multiple affairs. Tanya thinks there might be some justice since the cookie lady nonsense. Kenya is literally getting a taste of her own nasty medicine while being served some stale cookies #justice.

Kandi shares Todd wasn’t happy over her acting part, specifically the sex scene. She spent an entire day on set and didn’t check in with Todd. Whoops! She did take the time to like a photo on Instagram. Todd was perturbed over that. Ouch. That is understandable, so Kandi, pick up the darned phone and phone home like E.T.!

Porsha shares her story when she had a miscarriage six years prior while she was home alone. She wants everyone to share their stories as well. Tanya shares that she has had challenges in having children. She tears up describing her journey to be a mom. She really wants a family and finally has a good man to have kids with. We also get to see a softer side of Marlo as she shares the challenges she has had in the past regarding her difficulty having children as she admits to suffering two ectopic pregnancies. She now thinks her purpose in life is to be there for her nephews. I agree with her on that. She is an amazing aunt!

Shamea shares that Kenya was there for her when she had issues with her delivery. Porsha wonders why she wasn’t the “phone a friend?” Kenya has to make the point that Porsha wasn’t available for Shamea but she made the time for her #SuperShady.

Kenya is working on the visitation issues with Marc. She talks about the relationship struggles she had with Marc. Kenya shares that she is not allowed to speak to Marc’s parents. This is the most bizarre thing I ever heard. Who would want to marry someone who won’t “allow” you to converse with their parents? She should have run for the hills!

Aunt Lisa who seems like a total sweetheart who is willing to step in if needed to care for Brooklyn. She seems like a good person and an awesome choice. Finally, Kenya made an intelligent and well thought out decision.

Todd confronts Kandi because she has taken on too much. He thinks their family is suffering as a result. Todd thinks she books every minute and doesn’t make them a priority. Kandi thinks Todd is more troubled over the sex scene than her being away from their family. Hmm, she might be partially right about that one, but she does have a lot going on. She may have bitten off more than she can chew. Slow your roll, Kandi!

Todd struggles with being good enough for Kandi. Mama Joyce made him feel inadequate. He doesn’t like being seen as a gold digger. Some people think that can be a profession! Wink, wink, Marlo! Kandi starts crying when Todd shares his feelings. He admits he is doing things to be successful not things that make him happy. Todd tells Kandi he needs her around. They definitely are having some relationship struggles right now #priorities.

Next week, Nene and Gregg are having some sexy time. Eva is still battling with Marly’s dad over custody, and Dennis doesn’t want to pay for a wedding? See you all then and be safe!