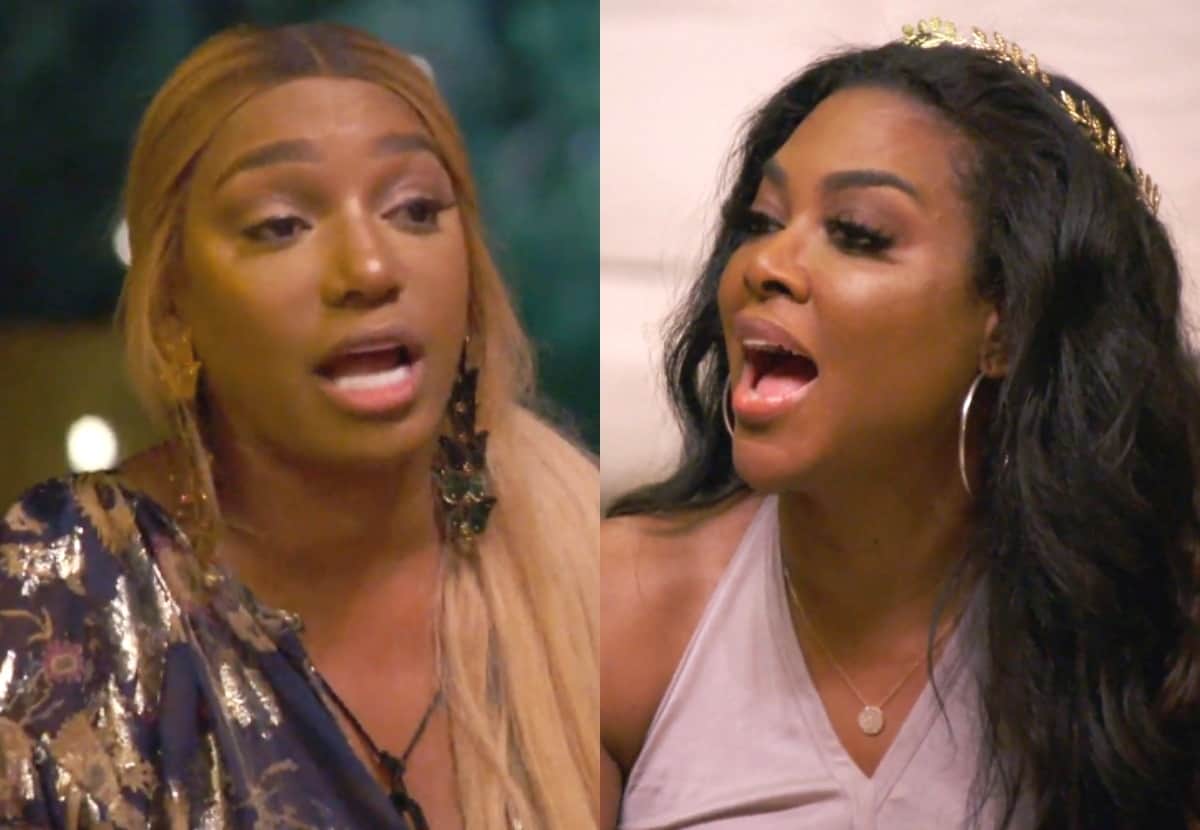 This week on the Real Housewives of Atlanta, we join the ladies back in Greece. We are still in the midst of the catfight between Nene and Kenya. These two are fighting to hold onto that Atlanta crown!

Nene is spitting what appears to be popcorn kernels at Kenya while saying, “I’ll spit in your motherfu**ing face.” Now come on, that is a waste of good popcorn! Kenya retaliates with, “The party goes on without you.” Oh no! She didn’t just say what we were all thinking! The other ladies in their talking heads refer to this behavior as ghetto and add that it warrants an a** whipping. Yep, it sure was all of the above.

Production then shows some clips when these two were actually friends. I don’t know about you all, but that seems like it was from a past life. I have learned a new few insults while watching this episode. “If you are feeling froggy, jump.” “If you want a dessert baby, just go to a bakery.” I honestly never knew that these could be translated into trash-talking someone?

Porsha tries to calm the situation. She shares that Nene has called her a pig before and she got over it. But she does take offense with calling a baby names. Kenya is the most upset over Nene calling Brooklyn a buffalo. Nene clarifies she meant Kenya was a buffalo. Oh, that is much better! And why is Nene obsessed with calling other women fat?! Especially when they’re pregnant? I don’t get it either!

It is interesting how they both say kids are off-limits. IMO, these two despise each other to their core. There are no boundaries EITHER ONE will not cross. In some ways, they are almost like the same person! Porsha tries to mediate this sh**show. I don’t know who she is channeling but I have never seen her so calm, cool, and collected. She is like a court mediator during a contested divorce or maybe a referee during a prizefight.

Nene apologizes for calling the baby a name. She claims she doesn’t remember saying that but in anger some nasty stuff spews out of her mouth. Kandi finally calls a time out with these two and says to Kenya, “Are you going to accept an apology or not?” Dear Lord, please just accept it and move on!

Marlo then asks Kenya for an apology over her rude interruption at her haircare event. She thinks Kenya is a great actress and has the innate ability to constantly shift the narrative. Yep, she sure does. Production shows some shady clips where Marlo shaded Kenya’s mother and family. Kenya, who can’t take any MOORE, runs away like a big entitled baby.

Kenya is allowed to throw out as much shade as she can. It never fails to amaze me how she can still expect apologies from others. Kandi chases after Kenya again, and Kenya ends up shoving her. Really, Kenya?! Kenya says, “I don’t have time for this sh**.” Well then, maybe, sweetie, you should have stayed back in Atlanta, given up the $$ for this Greece trip, and cleaned up your disaster of a relationship.

In total frustration, Tanya throws the crown in the pool. It is time to throw in the towel on this ruins party. Sometimes you just need to know when it is time to walk away.

The next morning, we see some cuteness on this trip with baby PJ #Sweet. Marlo has her makeup artist touching her up and she needs to keep her bible close. Amen! You might need to say the rosary as well.

Porsha and Tanya are in utter disbelief over what transpired the night before. She can’t even put on chapstick for goodness sake! Porsha is literally roughing it right now. Nene comes out all happy as a clam in her colorful caftan. She acts like she doesn’t have a care in the world

We have Porsha, Tanya, and Nene discussing the ruins party from the night before. Nene thinks Kenya gets away with murder. Pot meet Kettle! Porsha has come to the realization that both Nene and Kenya are basically one and the same. Kenya, darling, you can’t throw grenades at other people’s businesses and then act all offended when they retaliate with missiles of shade. Please just don’t trash Porsha’s Go-Naked Hair for god’s sake!

Cynthia and Kandi try to talk with Kenya. Kenya compares Nene to a fire-breathing dragon. Agreed, this is like Game of Thrones! They are both competing to lead the Kingdom of Atlanta. Kenya thinks Nene was disingenuous with her concern over her situation with Marc. Agreed. Kenya feels like she finally has a husband and a child and Nene has managed to use it against her. Hmm, maybe, but you give her so much ammunition to work with and you also have a history of talking about other people’s marriages and husbands. #TruthHurts

Kandi says everything that has been said and done is forgivable. There is no reason you can’t just move on. PREACH. She is right. She had to deal with false rape allegations and forgave Porsha. Now that is some serious stuff.

The ladies head to Lindsay Lohan’s beach club?  Is Lindsay going to make an appearance? They will be participating in some team-building exercises. Kandi is taking back control of the trip. They are going to be playing a listening game. With this group, there is no listening. There is just a constant cacophony of shade being thrown out.

Kandi is the judge. One person is a guide who has to instruct you on how to get through the obstacle course. The other person is blindfolded and has to trust their partner and just listen. Hmm, sounds like it could be easy, but look who we are dealing with! Our teams are Nene/Porsha, Cynthia/Marlo, and Tanya/Kenya. I know who I am betting on!

Kandi thinks they all can be competitive. They will all work together to win. She also has some ground rules. No ball throwing is allowed!

It is funny how Nene and Porsha describe each other’s listening or lack thereof.  I have to comment on some of the bathing suits these ladies are wearing. Marlo always manages to wear something that I just can’t resist commenting on. She is wearing a Chanel black one-piece and her too-tight bathing suit will soon be giving her serious camel toe.

When the game begins, Marlo looks like the walking dead wandering aimlessly on the beach. LOL, there needs to be a meme made of that! Cynthia and Marlo are a hot mess collaboration. Cynthia should have been whispering sweet nothings about rich men being in the vicinity. Marlo has a radar for that stuff. Cynthia sucks at taking direction. Nene and Porsha win this round.

The next game is back to back. They have to work as a team with their arms intertwined and fill up their cups with water. The first team who fills up their bucket to the line wins. Nene and Porsha don’t fare as well in this competition. Porsha is pretty strong! She basically drags Nene across the beach. No surprise, Marlo and Cynthia don’t fare well either. Kenya/Tanya prevail in this game.

In their group shot on the beach, they all look pretty darn good in their bathing suits. I wish I had that kind of confidence.

Kandi has planned a goddess party for the ladies. She thinks they should act out a Greek tragedy between Nene and Kenya. Cynthia, aka the Goddess of Cheekbones, will be playing Nene. Kandi will be Kenya.

At the Goddess party, there is a spread of food, but Kandi can’t keep the cats away!  Full Disclosure: I am a cat lover and would definitely go to Greece now!  Nene and Cynthia walk in hand in hand. They must have formed some sort of alliance to survive this night.

Cynthia, Tanya, and Kenya make beautiful goddesses.  Porsha is Aphrodite, Goddess of love and beauty. Okay, that is pretty accurate. Kandi is Tyche, Goddess of fortune and prosperity. Yes, girl, you are on point with that one.

Kenya is Athena, Goddess of wisdom and war. Yes, you do use that wisdom to incite wars among your fellow housewives. Nene is Eos, Goddess of health. Well, we would have to ask Gregg if that has merit. Kenya thinks she is more like Medusa. Yeah, I can see that too, especially when she wears that awful short blond wig!

Marlo is Artemis, Goddess of hunting. Good one, always hunting for her next sugar daddy. Cynthia is Hera, Goddess of marriage and birth. Okay, she is getting married again, makes sense. Tanya is Hebe, goddess of youth and beauty. Yes, she does look fabulous and forever young.

The Greek tragedy is being acted out by Kandi and Cynthia. Porsha thinks they should just abort this mission. I agree — BIG mistake, HUGE mistake. Nene thinks she has already tried to communicate with Kenya. She can’t allow anyone to impersonate her and call her out on her hypocrisy.

Nene gets up to leave. She claims she is just going to the bathroom. Porsha calls it when she says when you see the back of Nene’s hair, she is on her way out for good. Producers try to intervene, but she is really rude to them. No surprise there, Bravo must really have a high turnover rate for producers!

The night ends in literally a Greek tragedy. They have started new wars and all that is left is ruins…

Next week, Kenya is faced with how to co-parent with Marc, and Kandi is trying to balance her juggling act of being a working mom and wife. See you all back in Atlanta!