RHOA Recap: Marc and Kenya End Their Marriage After Marc Explodes on RHOA Producers at His Charity Event 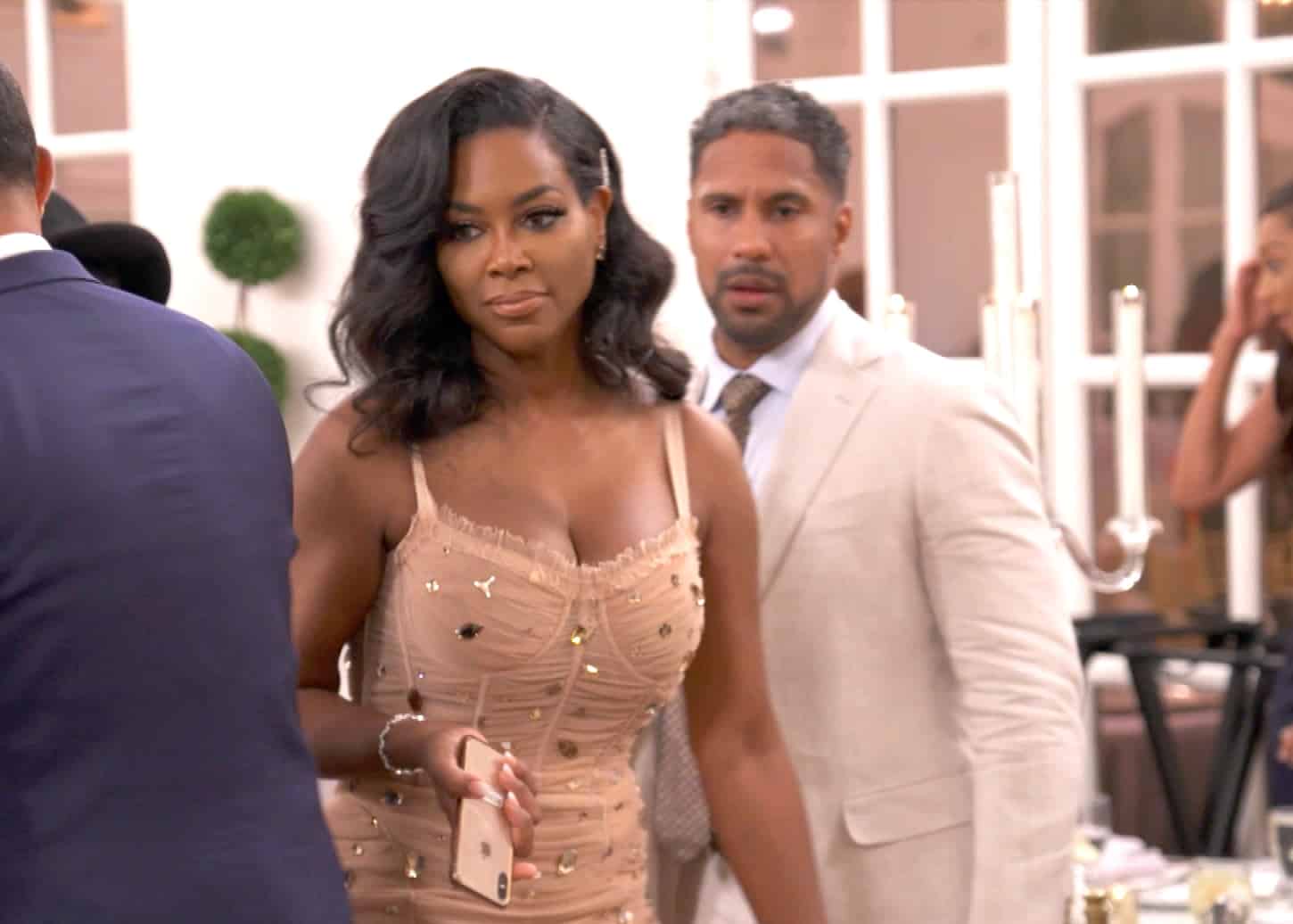 This week on the Real Housewives of Atlanta, we attend Eva’s baby shower and Marc’s Black Man’s Lab event. We also see Nene get frenemy survival advice from Wendy Williams? Should be entertaining…

The ladies attend Eva‘s sunflower-themed baby shower, which looks beautiful. Eva wanted sunflowers, love, and light. Cynthia nailed it! Nene arrives on time ?  What’s up with that trying to stay relevant on RHOA?  She is already making snide comments about Eva and Michael‘s living situation when she shades Eva over moving “from box to box.” Great friend! #Rude.

Eva may not live in a Mc-Mansion because she tries to stay within her means. She doesn’t compete with everyone and is not house rich and cash poor like some who shall remain nameless.  Eva is grateful that Cynthia put so much thought into her shower after only knowing her two years. Keep doing you, Eva. You are the real deal and obviously have a good thing with your husband.

Nene and Porsha discuss how submissive Kenya is around Marc. She shows a text where she claims she sent Kenya an olive branch?  This text to Kenya mentions the loss of Nipsy Russell and Kim Porter. Come on, Nene, you are comparing your friendships and relationships with real celebrities.  Why does she think she is like an A-list celebrity #delusionsofgrandeur. All the text got was crickets from Kenya.

Kenya, of course, in her talking head claims she has more responsibilities that Tanya. Kenya shades Tanya for having a fiance and not a huzzzzband, you know, like the great one she has! Stop with the comparisons,  you are just a very jelly woman who envies anyone who is happy and has a great life. Take a step back, Kenya, look at your disaster of a life and then evaluate what your house looks like. In my book, Tanya has more than most of them except maybe Eva since Michael is awesome #crush.

Marlo arrives in some crazy get up with a train that resembles toilet paper? They decide on some baby shower games that involve sucking on baby bottles and making toilet paper dresses. Tanya is going down on that bottle. She has mad skills. Shamea wins because she bites the nipple off?

Kandi, Tanya, and Kenya sit down to chat about their differences. Kandi wants them to be able to put the hunt behind them so they can move forward. I like that, Kandi, nice change of wording. Tanya doesn’t think Paul will want to attend the event. She doesn’t think he likes being portrayed as a cheater and with a cookie lady no less!

Tanya thought the cheating claim against Paul was really frivolous. Kenya snidely says it was only frivolous to you. Clean up your own house, Kenya, before you judge another’s situation! She thinks it is absurd to think that Paul would want to support something (me too!) Kenya is pushing. There are scenes where Production shows Kenya giving a bullsh** apology to Tanya #Fake.

I have to mention that the soundtrack RHOA production is using this season is pretty cool. Kenya is driving in her car and the lyrics are: Mirror Mirror on the wall, who is the diva of them all? Very catchy song and apropos.

Kenya in involved in the planning for Marc’s even though I am sure he will criticize and not give her any credit for. I am surprised Marc is letting her make decisions for his event .

Kandi is auditioning for The Chi, which films in Chicago. She really is a hustler and seems to like to have her hands in a lot of projects. Good for her, but wait, there is a sex scene! Girl, you are brave to put yourself out like that. Hard pass for me!

The surrogate is giving birth in two months and there are some issues with Todd. Kandi wants to be supportive of all of Todd’s business ventures since he always encouraged her. He is keeping her out of the loop and she likes to have more say-so over things her name is attached to. I think she might be biting off more than she can chew with all of this going on.

Kenya visits with Cynthia and chats about her love life with Mike. Cynthia shares they had a disagreement over their communication issues. She is fearful over the other layers of Mike’s onion and what is at its core. Keep peeling and focus on that, STAT #Redflagsgalore.

Kenya shares that Marc has only apologized one time in the last three years. She thinks since they are not being intimate that insinuates a man is getting it elsewhere. TRUTH! Kenya at times in this conversation seems to be more talking about herself and Marc than Cynthia and Mike. I don’t know what better sign you need than the guy won’t even move to be near you and your child.

Kenya says to Cynthia, “Does a good man cheat?” I agree cheaters are liars and she lies about everything regarding Marc. Wake up, Kenya, he is not that into you and only wants Brooklyn. Who came to who for advice in this scene?

Nene and Wendy Williams??? are chatting about the Greece trip. Wendy thinks Nene is a good friend — hmm, sure. Nene says they are close buds and share a lot of gossip. Wendy also likes to share your tea with others, too.

Wendy tells her to “hold her wig” and fake it till you make it. She also says to give the girls “her spread hips and a** to kiss.” Okay, sage advice from someone who should NEVER give relationship advice!

Marc is really unappreciative about the clothing options Kenya picked out for him. No surprise there. He is hyper-critical over everything she does for him. Marc is literally exhausting to be around IMO. He is the kind of guy you can never please. Kenya, quit forcing this farce of a relationship down our throats and please move on to only co-parenting with this man.

Kenya mutters a**hole when she leaves the room.  I could come up with more descriptive words to describe Marc and his condescending ways. Kenya definitely met her match with this guy. It must be karma!

We are finally at the Black Man Lab event. Marc is totally ignoring Mike Hill and Cynthia standing there. He is the type of guy who just talks at people. There is no give and take with this guy and he comes off socially awkward. The seating chart is already an issue since Kenya is being really petty with Tanya. Really uncool at a charity event about empowerment. Tanya tries to sit with Porsha in Shamea’s seat, who isn’t even there, but no can do.

Production makes Kenya fashionably late for her husband’s event to further gaslight this relationship. She calls Marc from the car to walk her in. Kenya tries to work the room and Marc wants her to sit obediently by his side .

Marlo arrives with her two nephews who she says need some good male role models. She asks Kenya, “Where do we sit?”and she tells them to go to the back? I understand they despise each other. Come on, Kenya, suck it up! It’s for a good cause. Let them have a seat because for once Marlo wore something that actually doesn’t look ridiculous for this event. She also brought the target audience who need to be empowered. Kenya appears to be misdirecting her anger at others instead of at the jerk she’s married to!

Marc doesn’t even give his wife an honorable mention during his speech. Mike Sterling shares an inspirational speech about being abandoned at birth. He shares how his adoptive parents were the role models he so desperately relied upon.  I agree with Eva. She has a good man.

Kenya is ranting about Marlo bringing her nephews and being really hateful to Kandi, who awkwardly smiles and nods. Just like Marc, Kenya appears to have a hard time picking up on social cues as well! Marc then says that is actually who should be at this event. Reluctantly, SIGH, I have to agree with Mr. Daly on this one.

Nasty and entitled women, really, Kenya? You wrote the book on it with Nene as your ghostwriter. All of the couples donate to the cause, and it is refreshing to see them spend money on a good cause instead of over-the-top crap.

When Marc interacts with Kenya he treats her like an annoying gnat. For some reason, there has to be a security guard at a charity fundraiser? Production is definitely expecting a blow-up . Marc finds the cameras and security to be invasive. Then quit and go back to NYC!

Kenya reflects on what brought Marc and her together. Marc’s open mic tells production to shut the filming down. It is pretty telling when the camera is not even filming him — just the mic is picking up his voice. He says, “End it and you will never see me again!”  Pinky promise, Marc? The next day they announce they are getting a divorce. Phew, this was a long episode, glad this is over, it gave me anxiety and I wasn’t even there!

Next episode we are heading to Athens, Greece. Will all of their relationships be in ruins? How will Kenya respond to Nene regarding the separation? We will have to wait until next week, see you then!