Kelly Dodd is clapping back at allegations of racist behavior after her former Real Housewives of Orange County co-star, Tamra Judge, called for her to be fired from the Bravo series due to past admission that she doesn’t date black men.

Days after Tamra lashed out at Kelly on her Instagram Stories, Kelly responded to a fan who wanted to know if she truly felt that she couldn’t be racist because she’s Mexican.

Following the posting of a meme about not arguing with people on social media, Kelly was met with a fan who asked, “But like, do you truly believe that because ‘You’re Mexican you can’t be racist’?”

In response, Kelly suggested that she is not only not a racist, but actually someone who has experienced racism herself due to the fact that she is a “woman of color.”

“I’ve experienced racism personally.. I’m a woman of color and love everyone!” she replied. 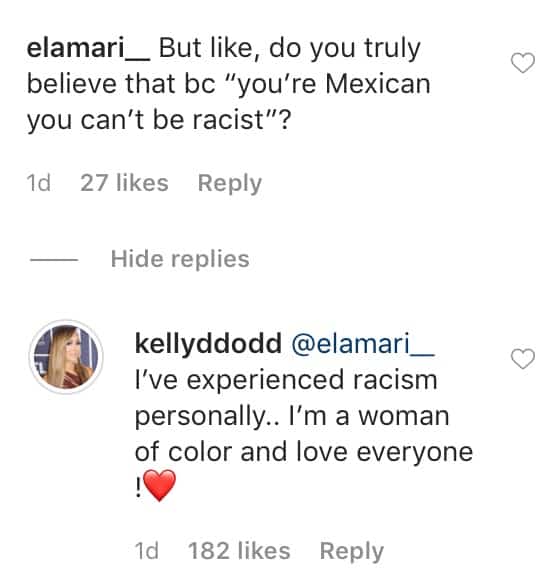 During a Q&A on Instagram earlier this week, Tamra told a fan that she agreed Kelly should be fired for telling TMZ in 2016 that she doesn’t date black men and didn’t even know any black men.

Tamra also said on her Instagram Stories that Bravo “shouldn’t just single certain people out like [Stassi Schroeder] and [Kristen Doute],” who were fired from Vanderpump Rules last week due to claims of potential racism.

“There should be zero tolerance at this point,” Tamra explained.

In response to the dig, Kelly clapped back at Tamra by calling her “thirsty” in a post on her own Instagram page.

“She’s just thirsty and mad she got the bullet .. grasping for straws poor thing .. I hope she finds happiness,” Kelly wrote.

The Real Housewives of Orange County season 15 went into production in February but was shut down weeks later due to the coronavirus pandemic. The cast is now expected to resume filming next month.