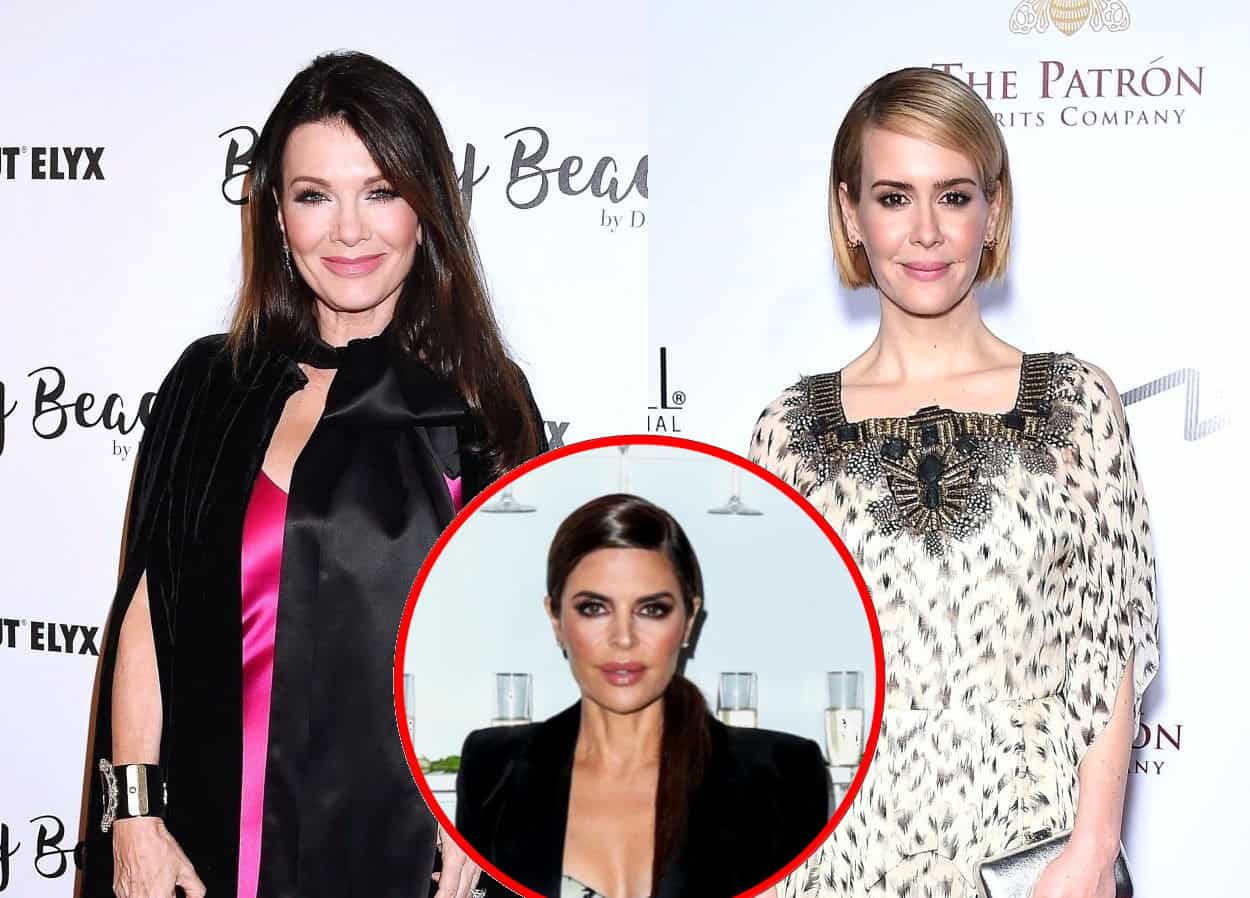 Lisa Vanderpump took to her Twitter page over the weekend to address her ongoing feud with Sarah Paulson and the recent closure of her Beverly Hills restaurant, Villa Blanca.

After the actress appeared on Watch What Happens Live last week, where she said for a second time that Vanderpump wasn’t very nice, the Vanderpump Rules cast member reacted to a photo of Sarah holding her beloved Pomeranian, Giggy, before explaining why she didn’t renew her lease for Villa Blanca and seemingly slamming her former Real Housewives of Beverly Hills co-star Lisa Rinna for being nasty.

After seeing that one of her followers pointed out that a 2015 photo of Vanderpump and Sarah in no way proved that the two of them knew one another, Lisa suggested that if she had truly not been friendly to Sarah, she would have never let her hold her dog.

“Why was she holding my dear little Giggy if I wasn’t nice to her? Someone sent me a pic of that…and I never let just anyone hold my [precious] boy. Wtf,” Lisa replied. 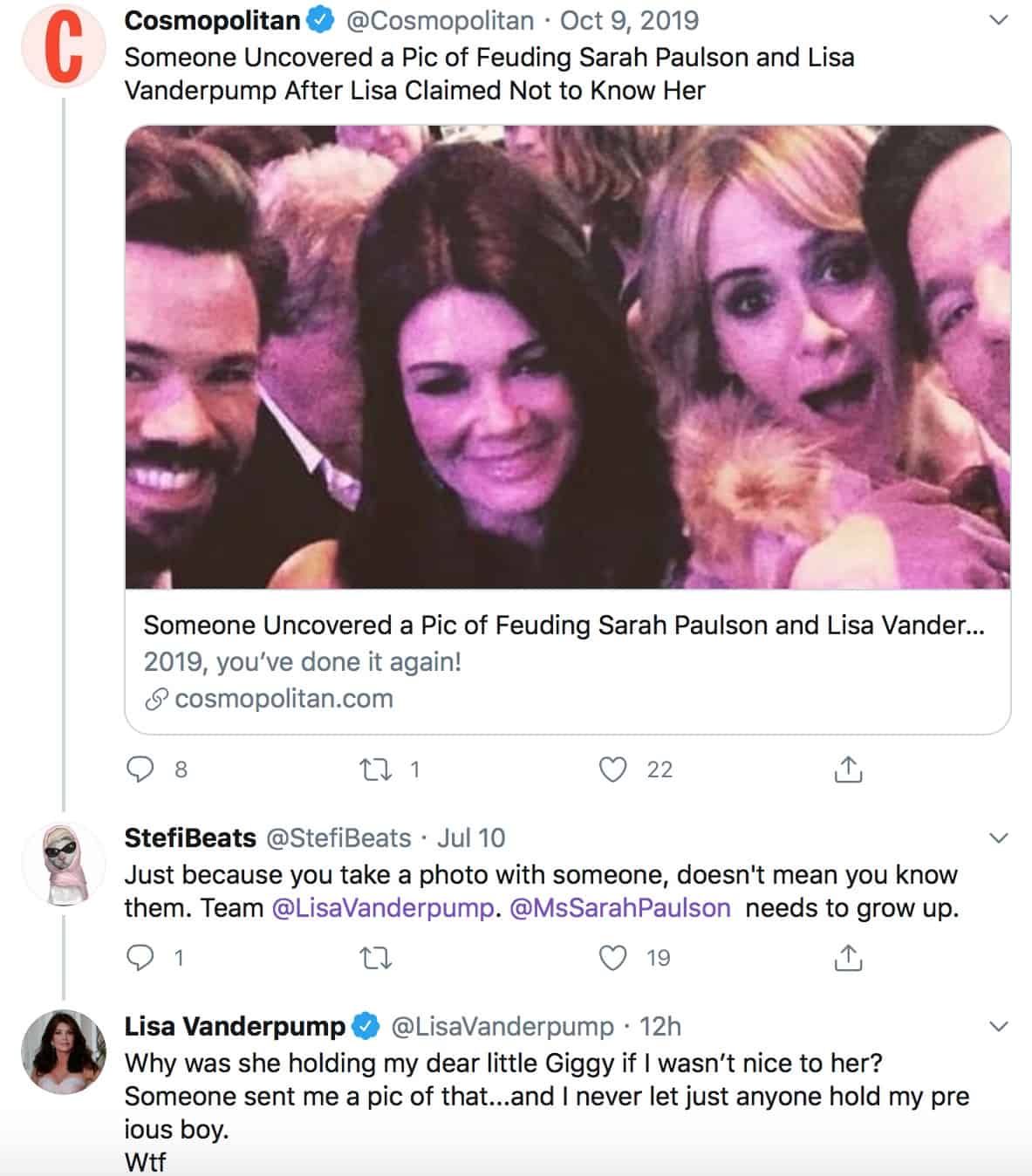 Lisa then reacted to a statement sent to her by one of her fans, who expressed sadness over the closure of the ex-RHOBH cast member’s restaurant Villa Blanca and took aim at Lisa’s former Bravo co-stars who have “used the media to try to hurt” her.

“I wanted to express my sympathy for the circumstances which caused you to have to close. I do hope you can purchase another location [and] reopen if [and] when you wish,” the fan wrote.

“Thank you for your kind words, we are as always looking at future projects, one door closes…I feel so bad for people who can’t sustain this it’s awful,” Lisa responded. 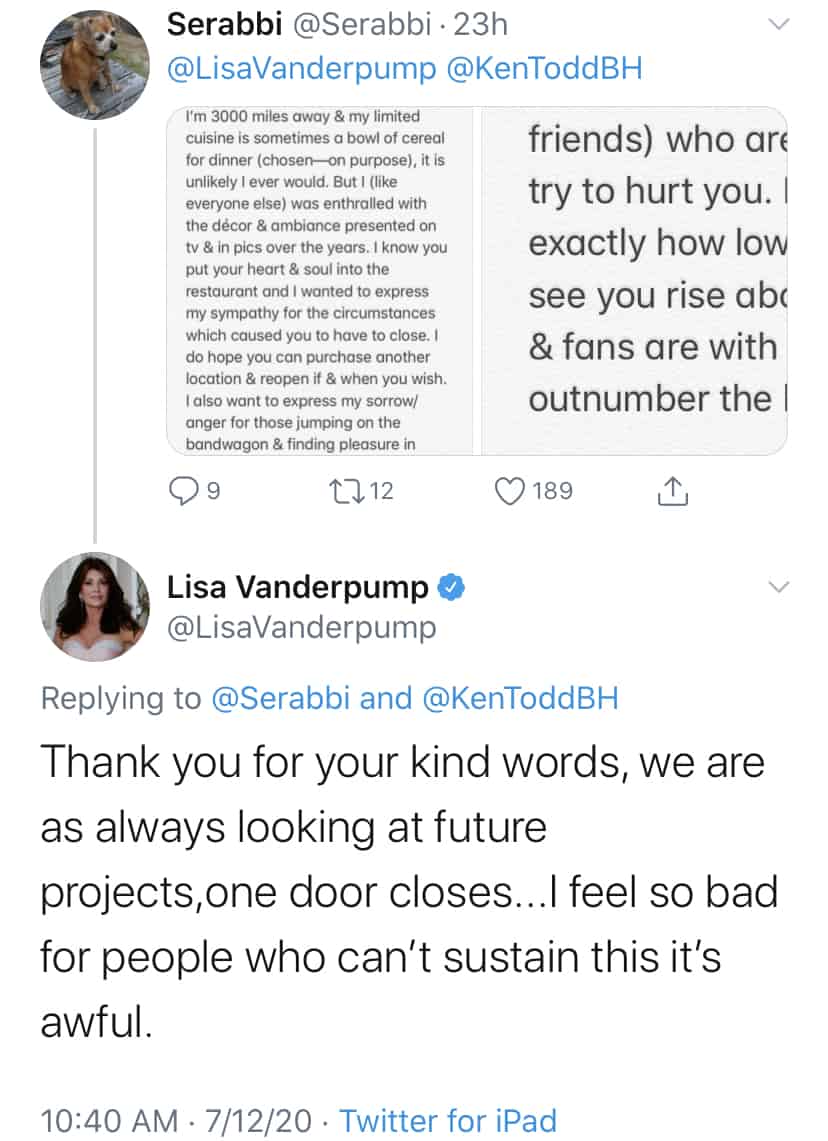 Lisa also responded to the fan’s message in a second tweet.

“Yes, it’s a shame for sure, the lease was so close to expiration and still with no opening date in sight, it just didn’t make sense,” Lisa began.

Then, on the heels of both Kyle Richards and Rinna commenting on Villa Blanca shutting its doors, Lisa mentioned the “nastiness” she’s seen before discussing the possibility of opening another restaurant in West Hollywood, California, where she also owns three other venues, including TomTom, SUR Restaurant, and PUMP Lounge.

“I see the nastiness, I ignore it.. I hope another restaurant will fill the gap of meals for the homeless [though]. I will try from [West Hollywood],” she shared. 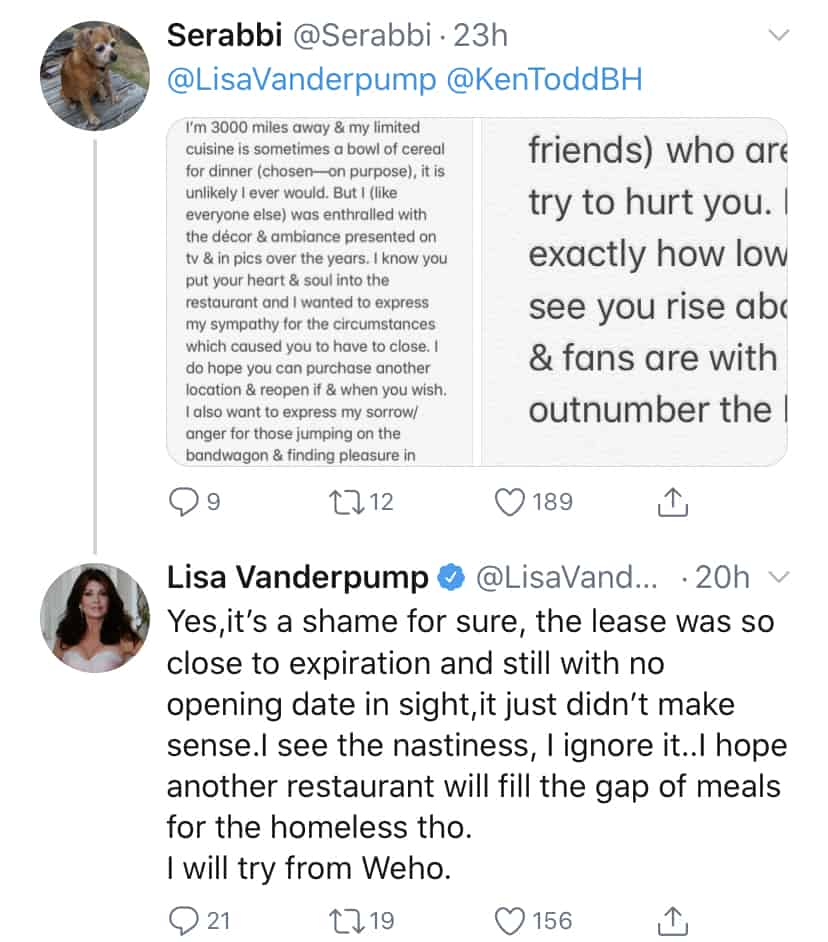 After Kyle said last week on WWHL that she wasn’t surprised to see that Villa Blanca was closing, Rinna took to her Instagram page, where she shared a meme of herself running past the restaurant and included a laughing-while-crying emoji.