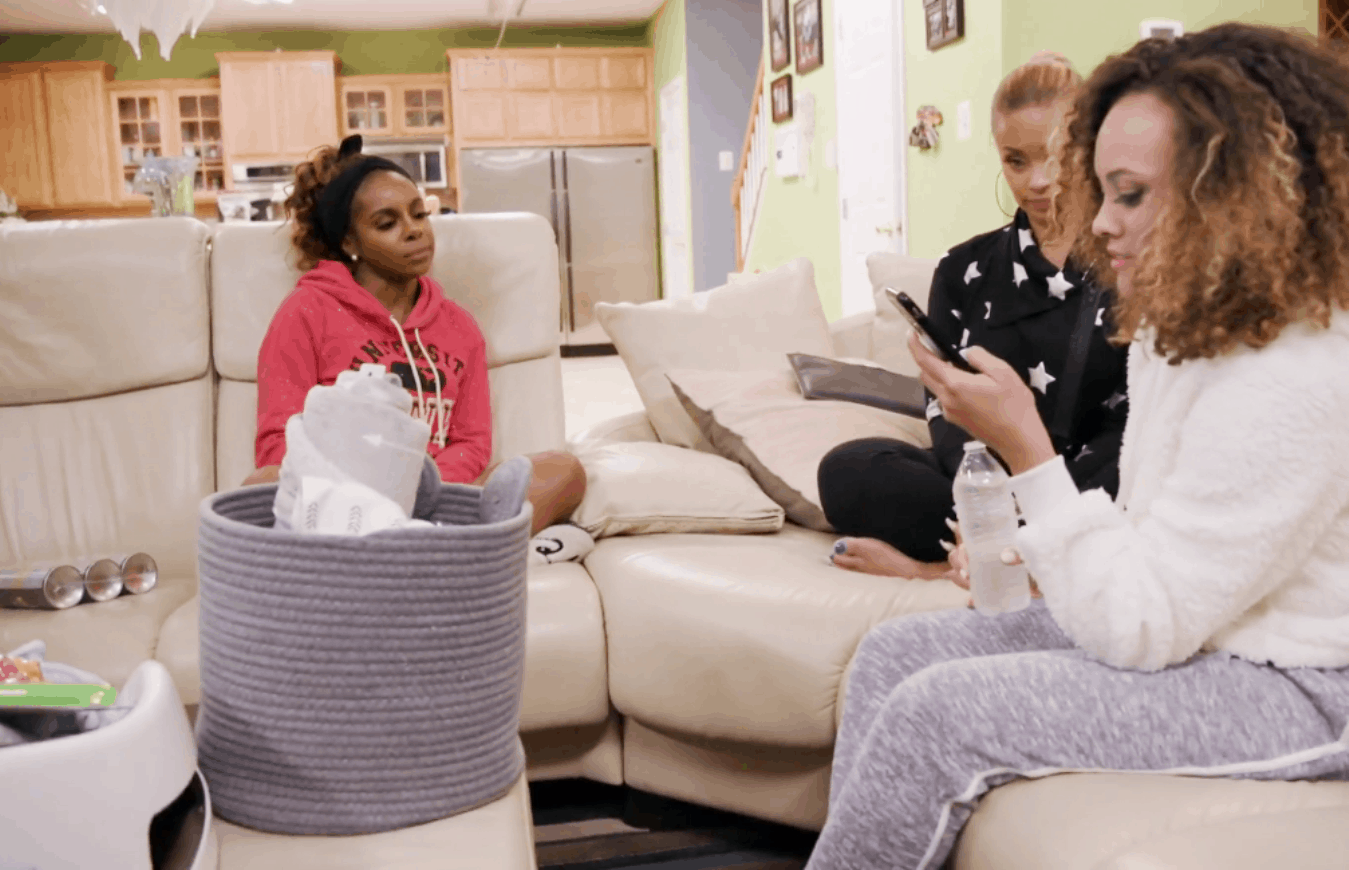 On this week’s episode of the Real Housewives of Potomac, we are still at the lake house. Candiace will also be sharing the salacious contents of the text with Ashley. Let’s see what happens when this hot tea is spilled!

We head back to the dinner, and Gizelle and Candiace are nervous about the stuff they need to share with Ashley. It will be a confidential conversation and not a group one. Good plan! They get back to the house and there is a bug flying around. Candiace comes out with a six-pack of bug killer, and then Karen comes to the rescue with her Manolos and squashes it. T’Challa was even going to be dispatched but he scares the crap out of the ladies so he has to be put away.

Gizelle and Candiace are waiting to chat with Ashley but Dean is crying upstairs. Ashley finally gets Dean to settle. Monique came back inside since she is being nosy and they are trying to get her to go back outside. Ashley very calmly looks at the texts and doesn’t seem too upset. She wants to know if this person is credible. Ashley doesn’t seem surprised or rather concerned. She admits she still has an issue with fully trusting Michael and shares that she checks his emails/text and sniffs his underwear? I am sorry but I draw the line at checking underwear! GROSS! Ashley actually appreciates that they came to her and didn’t make it a group discussion. AGREED.

After sharing the tea, the other ladies join the rest of the group. Karen was concerned about Robyn’s safety being left alone with the wolves. Gizelle thinks Robyn is a grown woman and can survive without her. She and Robyn decide to call it a night since Gizelle is leaving early to accept a literary award. Ashley is already out cold and sleeping with Dean. I noticed she wasn’t blowing up Michael’s phone which is EXACTLY what I would have been doing! The text didn’t seem to be anything too shocking for her to handle. They have an arrangement, I tell you!

On a producer’s camera, Karen is really throwing back some shots with Wendy, Candiace, and Monique. Monique is partaking in some CBD. Karen is slurring through some loose lips and oversharing some very personal, ahem, intimate information. She is getting into what is happening with Ray and speaking her truth. Karen is finally being honest on how she had to bail Ray out of his tax issues and she wants a refund now. I actually like this Karen who’s showing a more vulnerable side and is more honest about her relationship and finances. They decide to toast to Wise P*ssies???

Chris S. arrives and Monique is happy to see him. Monique thinks T’Challa is learning how to communicate by chirping. I swear that bird is the new MVP of this show with his captioning. When Chris questions this smart bird and tries to pet T’Challa, he gets nipped! Don’t mess with his mama and doubt his intelligence!

Ashley shares with the other ladies that she was pulled aside by Gizelle and Candiace. Monique thinks the other women shouldn’t interfere in each other’s marriages. Ashley shares with the other ladies what was addressed regarding Michael. Monique thinks Candiace is really messy. Since she is involved in the drama with Ashley, she thinks she needs to mind her own business. Monique doesn’t trust her motives since she believes Charrisse started causing trouble with her with Candiace’s prodding. Robyn and Wendy think Candiace handled it appropriately but Monique isn’t on the same page as them. Karen tells Ashley she will soldier for her but she needs a bath because her cooc*ie stinks? TMI Grande Dame, way TMI!

Eddie and Chris B. arrive. Juan is coaching and Michael is working staying in hotels with strippers and can’t make it. Isn’t it kind of suspicious that the men that don’t show have reputations as cheaters? Jamal gets a reprieve this time since Gizelle is accepting an award, !

Wendy shares with Robyn that they all got toasted on Fireball shots last night. Eddie comes outside and Robyn asks if Wendy has an issue with apologizing and he says, “She is never wrong!” The guys go inside to have some bonding time.

Monique resents that they didn’t join in last night. She would have appreciated knowing what was going on in her home. Candiace and Monique go at it since they didn’t partake in the bonfire. Robyn can’t understand why Monique is so upset over fire pits and s’mores. They think Monique is a total control freak and the fact that Candiace was involved. Robyn and Wendy wonder what Monique is really upset about? Hmm, time will tell…

Gizelle wins a literary award for her fictional book My Word that is based on her marriage. She is thankful she got back together with Jamal. Since it gave her something to write about? I think it was probably pretty cathartic outing him for his bad behavior.

The guys are discussing vasectomies. Chris is afraid to get a vasectomy since he is afraid his toes will stop popping and his eyes will quit twitching. LOL. He will do it as long as sex is always on the menu. Ray then arrives just in time for this conversation to be over.

Candiace is very upset with how Monique treated her. She would have left but their husbands are good friends and she won’t disrespect her hosts in their home.

Chris brings in some beautiful flowers and balloons for Monique’s birthday. Candiace stays upstairs since she doesn’t want to partake in the celebration. She comes downstairs to be with Chris and he asks what is going on now? Chris doesn’t want his bromance to be ruined.

Karen pulls Ray aside. You can hear her telling him she is dizzy and lightheaded. It is called hungover, Miss Karen, take a Tylenol.

Wendy and Eddie share their love story that began when they were 17. There seems to be a power struggle between their moms and they don’t get along. Eddie’s parents didn’t attend their wedding and forbade family and friends from attending. Wendy thinks they are horrible. Chris S. shares that his mom had problems with Monique too but they worked it out. He hopes they can forgive each other but Wendy wiped Eddie’s tears and she is still hurt over it.

The husbands get a chance to imitate their wives, which should be amusing. Ray imitates Karen demanding her tea, STAT! Poor Eddie just can’t get it right when his wife asks his opinion on her clothing choices. Chris S. gets a little too raunchy demonstrating or-l sex with a giant Heineken bottle. He should have brought out T’Challa — that would have been better. Chris B. does the BEST impersonation of Candiace showing her sweet side and then flips the switch to show her feisty side. He was spot on! Bravo, Chris Bassett!

Monique and Chris are chatting about what went on over the past few days. Ashley is packing up to go home and needs help with the baby. Chris gets to hold Dean and IMO he is redeeming himself after that impersonation. Chris, I still love you! Monique claims she is tired and falls asleep on the sofa because she is exhausted . I see you, Monique!

Fast forward to 24 hours later. Ashley calls Michael allegedly at work and he is pretty abrupt with her. She said she spoke to Michael when she got home and he said a woman was a little too touchy-feely but nothing else happened. Michael had to sleep in Dean’s room since their conversation got pretty heated. Then FF for one hour and we have some new headlines about Michael. I love seeing Reality Blurb’s story about it on there! The ladies’ phones are blowing up with more photos of Michael in his boxers and a video of him all over another woman. Yikes!

Ending note: I know Ashley has come out and said they don’t have a conventional marriage. This is obviously not for everyone but it is a choice they are supposedly on the same page about. This arrangement obviously works for them since they are now on baby number two.

Next week, Candiace is done with Monique. Michael and Ashley have a chat about the text regarding him having a boyfriend and a wife. He admits to Ashley that something did happen at the casino. We then see the preview of the fight between Monique and Candiace! Take care and have a good week!