RHONY Reunion Recap: Dorinda Continues To Deflect and Ramona’s Loyalty is Questioned, Plus Luann Wants to Know Why Dorinda Resents Her 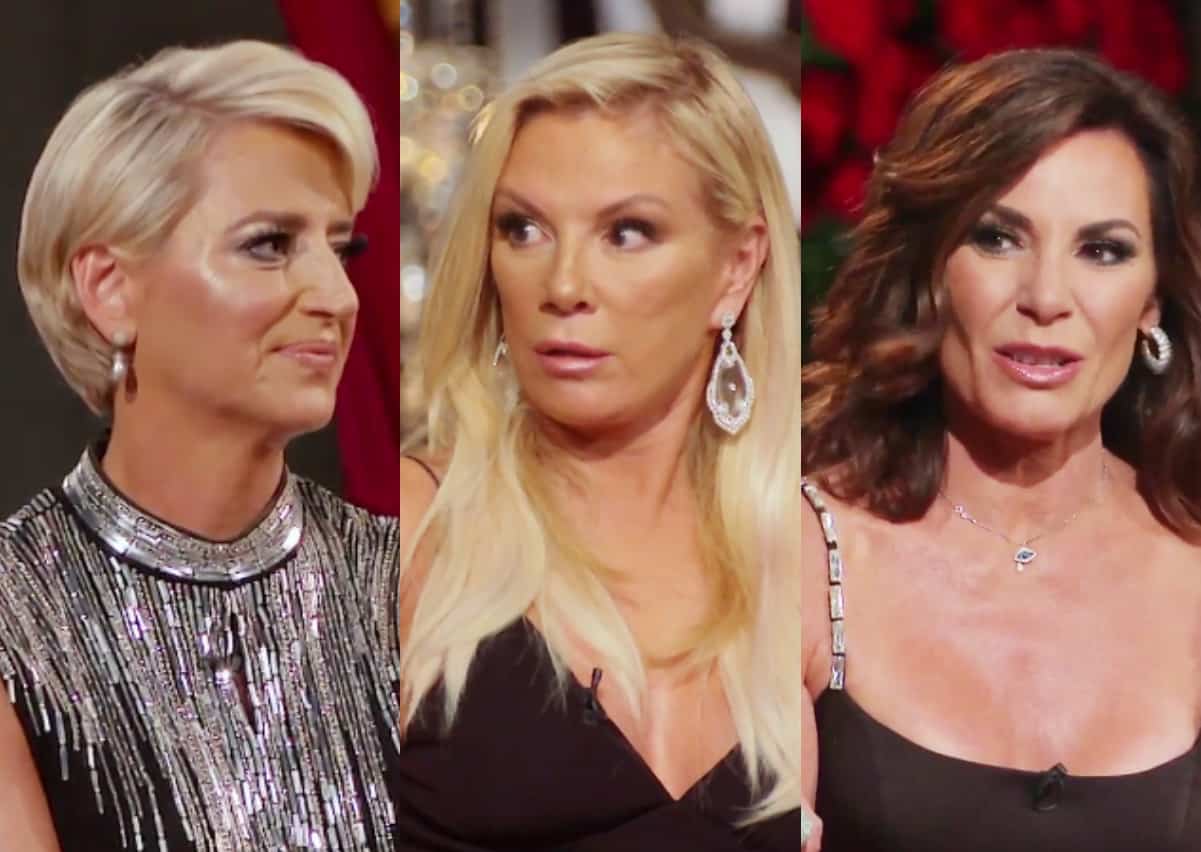 This week on the Real Housewives of New York City, it is the final episode of the reunion! Let’s go back and see how they can possibly find any resolution after this tumultuous season, shall we?

Andy starts off by saying watching RHONY is like an anthropological experience. He starts pulling clips from the Bravo vaults and sharing various tidbits reflecting their personalities. We start off with Ramona the apologizer who thinks sorry goes a long way. Production treats us to her never-ending litany of apologies that have virtually no sincerity or meaning. Ramona, of course, has to justify it by saying it is better to say sorry than to deflect. She is shading Dorinda on that one!

Sonja then gives us some of her famous quips. “Catch a d*ck?” She also shares how surprisingly out of all of them she only got a d*ck pic by mistake. Now that to me is shocking, I would have thought she would have a treasure trove of them! Luann, aka snatch guard, is stuck constantly trying to herd them like cats. Poor Luann is constantly directing them to eat, leave, sleep, and just frankly behave. I swear it is just exhausting watching what Luann had to handle this season while trying to maintain her sanity and at times her sobriety.

Dorinda has her little sayings: “Can you imagine?” and “Here’s the thing.” A viewer thinks it might be a European thing. I would venture to guess that they wouldn’t agree with that. Don’t insult the Europeans!

Leah has a thing about smelling. She even smells her own armpits. Leah has to touch and feel things to experience them. It was amusing when she smelled her own armpits at the party and said she stunk. Now THAT was real!

Ramona’s, aka the Singer Stinger, friendships are called into question. She claims to have a bountiful group of friends. Ramona thinks these ladies are just jealous she has so many friends. She thinks she has to bring herself down to hang with this group, but with her cool kid friends, she has to maintain a level of decorum. I loved the scene where Avery didn’t even believe her mom had 50 friends. Pricele$$!

Leah gives Ramona crap over the fake handbags. Sonya proclaims they were bought in Chinatown! I have never heard of anyone having a pocketbook birthday fund. Leave it to Ramona to solicit cash for a purse. The other ladies label Ramona as the worst host since she left her house to go to another party. When Sonja tries to explain her friendship with Ramona, she has to tell Ramona STFU! They fight over Pamela Morgan and who was her friend first. Who honestly cares?

Ramona also fat shames Sonja, not nice. Sonja had to stop having sex with her Netflix chill guy since it made her feel so insecure! I found it comical when Sonja said, “You’re not a socialite, you’re social-fu*king heavy!” Sonja just wants them to go off together like Lucy and Ethel and have BOGO martinis at Burger Heaven. Do they even serve martinis there? Sorry, I digress; I love martinis too.

Dorinda questions Ramona’s sincerity about having so many close friendships. She thinks Ramona’s friendships are superficial. I do too; how can someone who is so self-involved maintain fulfilling friendships with anyone?

Elyse is then brought back from the dead up and they discuss how Ramona dissed her all season. She thinks Ramona is filled with a lot of one-way streets. Dorinda still can’t figure why there was so much discord between the two. Ramona said she was a black widow and was supposed to be her defender. We are now hearing from the black widow and how Ramona trashes the other ladies behind their backs. Elyse actually made a little Instagram video with Leah about Ramona and her incontinence issues. They called her a Geriatric Regina George. Not nice, ladies, and frankly pretty gross too.

The other ladies compare Elyse to Barbara K. I don’t see that at all. Barbara was a good friend to Luann. I think Elyse just used Ramona and tried to create drama to earn a fulltime spot on the show. Don’t get me wrong! I am not defending Ramona. Elyse knew how Ramona was so she shouldn’t act all surprised it turned out the way it did.

Andy brings up Sonja’s fashion line and how she made it into Century 21. It was nice to see her finally make something real and legit. Poor Sonja is drowning in debt with her townhouse that she just can’t sell. The other ladies think Sonja drops off the planet when things are bad and only calls them when she is happy and upbeat. We have to hear again about the toaster oven, ugh, now Carole Radziwill is weighing in and claiming it was all for the show. Production shows all of Sonja’s imaginary business ventures that went bust.

Leah wishes the cashmere tracksuit was available since it would be a hit now since no one is wearing dresses. Andy asks about Sonja’s townhouse. Sonja shares she had to drop the price to $8.5 million since it wasn’t selling. I can’t believe that place is 4,800 square feet. That should be prime NY real estate and easy to sell if it had good plumbing.

Leah and Andy want to see the townhouse before she sells it. Dorinda thinks Bravo should rent it for filming. How fun would it be to film a version of Big Brother from the townhouse? That would be a wacky show for sure and it would sure be interesting to see who got voted off.

Sonja said she was out of sorts all season since she was hor*y and wasn’t getting any. She finally got her daughter off to an Ivy League school so she can FINALLY let her hair down? Are you kidding me? Luann will have a fulltime job just sn*tch guarding if she is just NOW getting started!

Andy then delves into the cesspool of Dorinda’s turbulent behavior this season. We are treated to the montage of her nasty comments to her so-called friends. Dorinda doesn’t want Lu to lecture her when they are in a good place about Ramona. Luann was hurt by Dorinda not taking any accountability for what she said to Luann about her mugshot on WWHL. She is doubtful anything will change with Dorinda since she is obviously resentful of her.

Dorinda’s true feelings come out when she drinks and until that ends nothing is going to change for these two frenemies. Dorinda is hopeful 2021 will be a better year for her. That is possible if she can find another job since she was canned for this one.

We then have to see the Wicked Witch Dorinda in the turban scene again. Egads! Dorinda does admit she projected her anger on others. She blames Ramona for not contacting her other than when they were filming. Ramona pulls out pages of texts from a drawer. When did the housewives start bringing out printed copies of texts to the reunions? This has been a constant theme this year on these shows — you have got to provide receipts!

Ramona thinks when Tinsley left she became the new punching bag for Dorinda. She then tosses all of the pages of texts on the floor. There was so much yelling about who was the most “present” friend. Honestly, I don’t know how either one of them would be a good friend to have? Dorinda throws all of your transgressions in your face when she is pis*ed. Ramona can’t possibly have time for you when she is ALWAYS in the Hamptons with her 50 friends.

Luann confronts Dorinda on how she spoke to her this season. She is hurt that Dorinda isn’t apologetic or remorseful over her treatment this season. Leah says, “I would kind of rather deal with someone that has anger issues than deal with someone that says horrific things all the time like Ramona.” She then very stupidly follows up with, “I don’t think Dorinda hits below the belt!” Come on now! How can anyone possibly say that with a straight face? Talk about having blind loyalty! Leah thinks Ramona is worse than Dorinda was? Huh, was she really paying attention or even listening this season? Dorinda admits she was in a bad place and should have taken the season off to go to rehab.

Andy asks Leah about the drag queen bingo party and Dorinda losing her sh*t over Tinsley. Dorinda apologizes to Luann and Leah but thinks Ramona wasn’t there for her all season. They decide to do a reset and bump elbows.

Andy asks the group to reflect on, “Who would they want to hug first and what would they want to socially distance themselves from this season?” Ramona wants to hug Dorinda since she thinks she needs it the most. She would like to distance herself from discussing Leah’s “mental issues.” Dorinda wants to distance herself from how she hurt Luann because I am hoping she finally realizes she went too far. She just wants to hug everyone since she is such a lover and a fighter.

Leah wants to socially distance herself from the entire state of Rhode Island and wants a hug from Mama Ramona. We finish this reunion with the ladies resolving some of their issues but there are clearly still hurt feelings. Andy thanks them for a great season and can’t wait to hug them all! Phew, we made it through this season and it appears we will have some new cast additions next season so maybe we will all get a refresh just like Sonja did! We now know Leah is staying since she got a raise and will return fulltime. Take care, everyone, and have a good weekend!