Home Vanderpump Rules Tom Sandoval and Ariana Madix Weren’t Invited to Gender Reveals of Their Vanderpump Rules Costars, Plus Ariana Reacts to Their Pregnancies With a “Baby Bump” Photo of Her Own

Tom Sandoval and Ariana Madix Weren’t Invited to Gender Reveals of Their Vanderpump Rules Costars, Plus Ariana Reacts to Their Pregnancies With a “Baby Bump” Photo of Her Own

Tom Sandoval and Ariana Madix appear to be on the outs with the majority of their Vanderpump Rules co-stars.

As a number of cast members celebrated the impending arrivals of their first children with gender reveal parties in Los Angeles, Sandoval and Ariana were noticeably absent, and after joking about her own round belly on her Instagram Stories, Ariana confirmed on Twitter that she and her boyfriend weren’t invited.

“Just curious why you’re MIA in the baby reveal parties?” a fan asked on Monday, September 28.

“We have not been nor would we expect to be invited to any of those things,” Ariana replied. 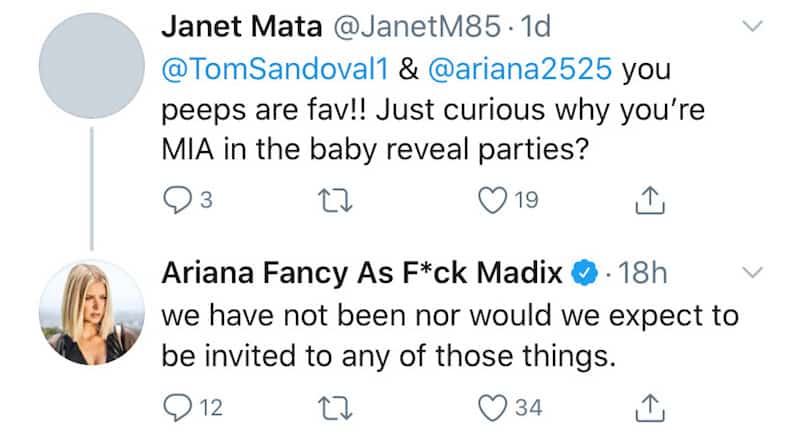 As Pump Rules fans have surely heard by now, Stassi Schroeder and Beau Clark are expecting a baby girl in January. In April, both Lala Kent and Randall Emmett, and Brittany Cartwright and Jax Taylor, will be welcoming their first children, a baby girl and a baby boy, respectively.

In addition to confirming she was not included in her co-stars’ gender reveals, Ariana seemed to poke fun at their back-to-back announcements.

“Not pregnant just bloated and starved for attention,” she wrote in the caption of a “baby bump” photo on her Instagram Stories days ago. 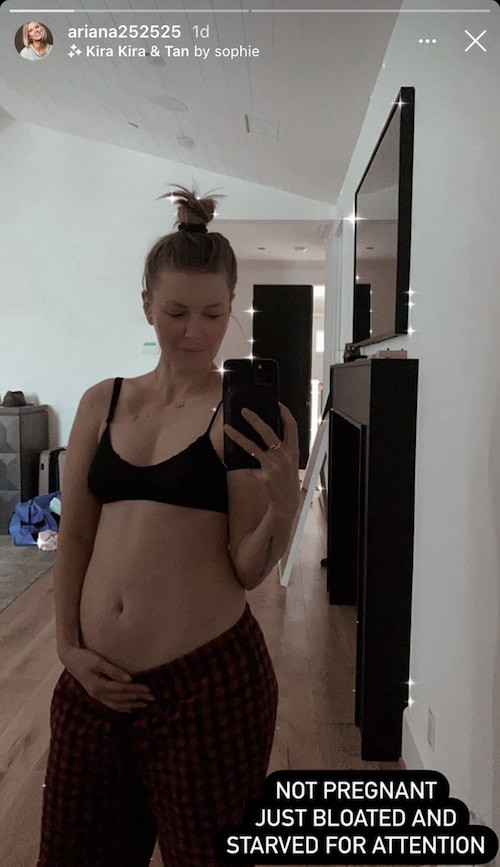 Following her post, Ariana faced backlash for her supposedly shady comment. However, in response to the criticism, Ariana said she was just joking around.

“Some of y’all are completely devoid of humor and think everything is ‘shade’ but I guess I got that attention I was desperate for anyway,” she shared in a second Story.

“[By the way], it’s a bean and cheese burrito and Del Taco is the father,” Ariana added. 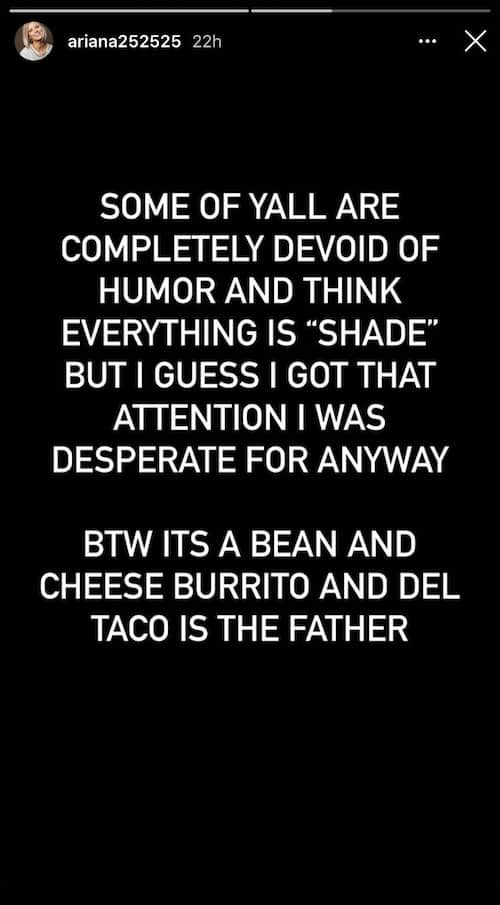 The Vanderpump Rules cast has not yet heard when they will begin filming on their potential ninth season.