Home Real Housewives of Potomac News RHOP Recap: Candiace Files Charges Against Monique and Ashley and Michael Share Their Past Infidelities as Wendy Celebrates Her Daughter’s Sip and See

RHOP Recap: Candiace Files Charges Against Monique and Ashley and Michael Share Their Past Infidelities as Wendy Celebrates Her Daughter’s Sip and See 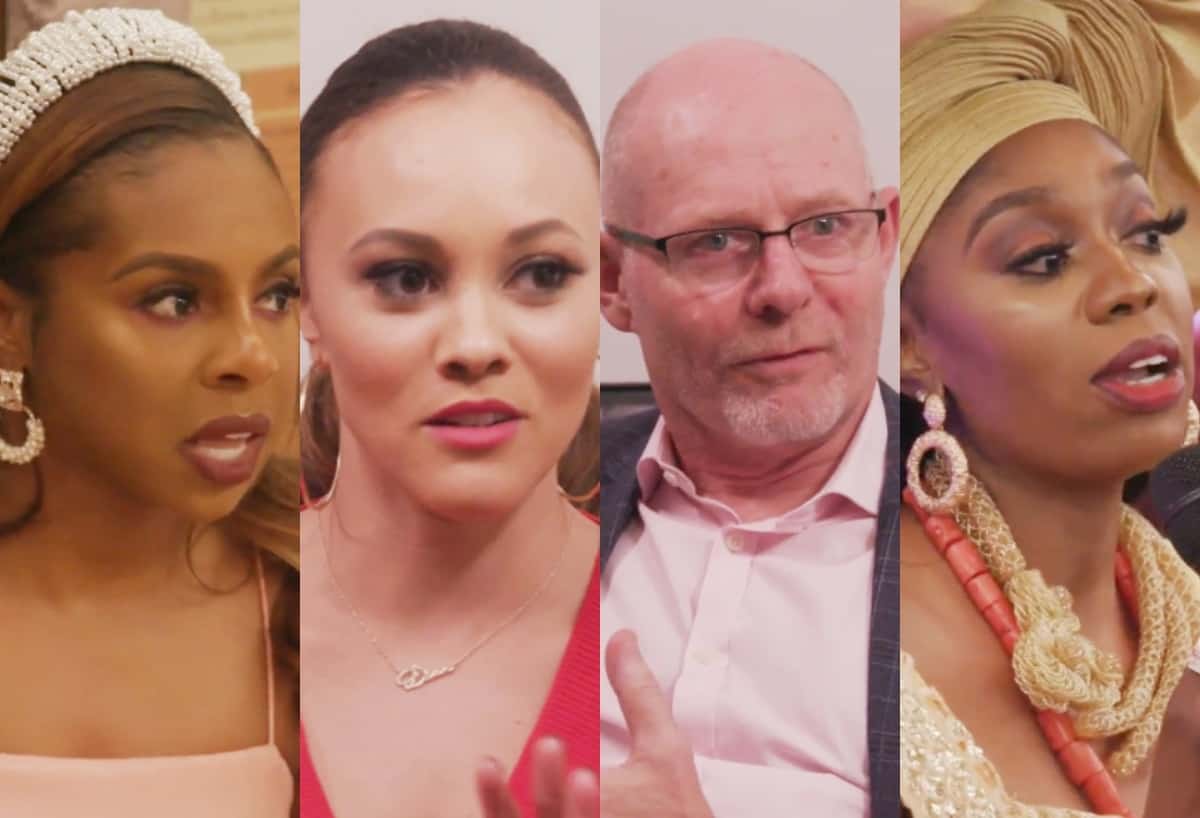 On this week’s episode of the Real Housewives of Potomac, will Candiace pursue charges against Monique, and will the other ladies react in solidarity? Let’s get to the bottom of this legal hot mess, shall we?

Wendy is having a Sip and See for Kamrynn, who has an adorable nickname, Kam-Bam. Too cute. The party will actually be a combination of the southern tradition of Sip and See and a Nigerian cultural celebration called ikuputanwa. All of the ladies are invited, except of course Monique, who is literally off the grid and in a production-mandated time-out.

Eddie shares that some members of his family haven’t even congratulated them on Kamrynn. It sounds like it is a battle of the Mama Titans where their two moms are battling it out for power, but at what expense? SIGH. Eddie’s siblings were unfortunately forced to take sides and they chose their mother’s side. His mother doesn’t have a relationship with him or his children since there is a strong dislike for Wendy and her mom. I hate to see when families are in this type of turmoil. Life is too short and they have to find a way to bring these two powerful women to a peace summit.

Ashley and Michael are meeting with their therapist to discuss his indiscretion. She shares that they had rules for their relationship and he violated them. Ashley doesn’t want this type of open relationship anymore. She admits that they used to have threeways in the past but they had conditions and he didn’t comply with them. I have to say on this topic, when you open the door to another person in your relationship, you are taking a chance that your partner will expect that door to stay wide open.

Michael thinks because there is a baby in the relationship now that there is a divide between them. He feels complete isolation from Ashley. Ashley admits she has changed since becoming a mother and no longer desires an open marriage. Michael feels that his relationship with his dad where his dad was hyper-focused on him made him very needy. His father basically smothering him gave him severe emotional distress. Ashley wants to work on their communication and be open with their needs and so no one feels neglected. I just don’t understand why she is pregnant again when her husband is feeling neglected with just one baby!

In the next competing scenes, we have Robyn and Gizelle trying to hang on to their guys. Gizelle is pretending to ask Jamal for advice on household décor for the house he will NEVER live in. Robyn is trying to copy the cheerleaders’ dance moves at a game to get Juan’s attention. Girl, he is just not that into you. I am sorry to say but both of their relationships come off as rather desperate. SIGH.

Karen and Ray are putting out their Halloween decorations. It means fall is here and such a beautiful time of year! I love their spooky zombies! Karen discusses her trip to Surry with Ray. She shares that it was good to go home to see how much she has grown. Karen admits she has changed since she is now a public figure. Ray feels that he has helped her get to where she is. He tells Karen he isn’t getting enough attention. Ray wants a balanced relationship and claims Karen’s fame has gone to her head. Karen is proud of her success and just wants Ray to love her like he used to.

Karen needs Ray to meet her halfway in order to make their marriage work. I hate to say it but I see a couple with an age difference that unfortunately grew apart. It is interesting that there is a storyline where we have two couples and the husbands feel neglected. Ray, I have empathy for, and the other one, Michael, not so much.

Candiace is meeting with a prosecutor to give her statement on Monique’s assault. She tells her mom, Dorothy, she must do this. Dorothy is totally supportive of her decision. Candiace doesn’t feel that Monique is being remorseful and she has no other option than pursuing legal remedies. Why can’t Dorothy or Chris go with her to the prosecutor’s office? I would think going through this process would require some support from your loved ones. Candiace shares that what happened really traumatized her, but why is she pursuing this alone? It makes me question if Chris agrees with her decision to prosecute Monique and potentially send her to jail.

Robyn is talking with her boys about her different business ventures. She shares that she dabbles in real estate and making hats? Hmm, she has 14 orders for her Embellished hats business. Where did that not so brilliant idea come from? Since someone complimented Robyn on her cute little hat she thought there might be a hole in the hat market? I can now understand why she is having tax issues.

Candiace is having “dinner kiki” with her friend Clifton, aka Cliffy. They have been friends since attending Howard University. Candiace shares with Clifton what is going on with Monique. She tells him about meeting with the prosecutor and wanting her prosecuted to the fullest extent. Candiace puts Post-It notes of affirmation around her house to reassure herself. I am frankly surprised that her confidence was rocked by this. I really thought those sayings were already on loop in her head. Candiace wants the prosecutor to take into account the social media bullying. She is troubled that Karen is on the fence over what happened. Candiace needs all of her friends’ support. Side note: I am not caring for the virginal white dress ITM look on Candiace with the white turban headwrap on her head.

Wendy and Eddie are checking out the venue for the Sip and See. She wants to do it at the Sandy Spring museum since it has culture and is in the theme of their event. Wendy probably doesn’t want any dysfunctional event at their home since you can never tell what will happen at these housewife events. I honestly can’t blame them for that one. Eddie tries to touch one of the artifacts and Wendy tells him, “Don’t touch that since it looks like Thomas Jefferson touched it!” LOL. While discussing the guest list, Eddie shares that Karter was asking about his grandparents. He wants his kids to know his parents and is considering inviting them. Wendy encourages him to reach out and extend the olive branch.

Ashley is visiting her surrogate dad, Uncle Lump. She has leaned on him since her dad hasn’t been there for her. Sheila arrives with her eye patch and joins them to visit. She is basically surprising Ashley for an intervention. Ashley shares what went on during the therapy appointment. She tells them that Michael’s childhood was difficult since he had a father who had a drinking problem and was verbally abusive. Uncle Lump isn’t buying Michael’s excuse and he needs to stop focusing on his penis. He wants to confront him and so does Sheila. Ashley isn’t ready for this showdown to take place, but she will exit this marriage if this behavior doesn’t stop… And I’m not buying this either! Maybe he needs a throwdown by Uncle Lump and Sheila?

Wendy and Eddie are getting their family ready for the big party. They discuss the party and he still hasn’t heard from his parents. Wendy gets news that Monique is being charged with second-degree assault. Eddie says, “This is a serious allegation and she could be looking at jail time.” Yikes, pretty harsh for a woman with three young children.

Robyn is the first one to arrive at the party. She wonders why she is earlier than the hostess. I feel like production is messing with her this season and giving her earlier call times than the other ladies. I love all of the production shade where she was chronically late in the past and even missed flights on cast trips.

Wendy and Eddie arrive at the party and it looks beautiful all swathed in pink and gold. The ladies discuss the assault charges. Gizelle is just giddy over this news. I think she is enjoying this too much — probably because the spotlight is off her ex-husband’s shenanigans. Karen doesn’t find this conversation amusing at all and is clearly troubled by it. 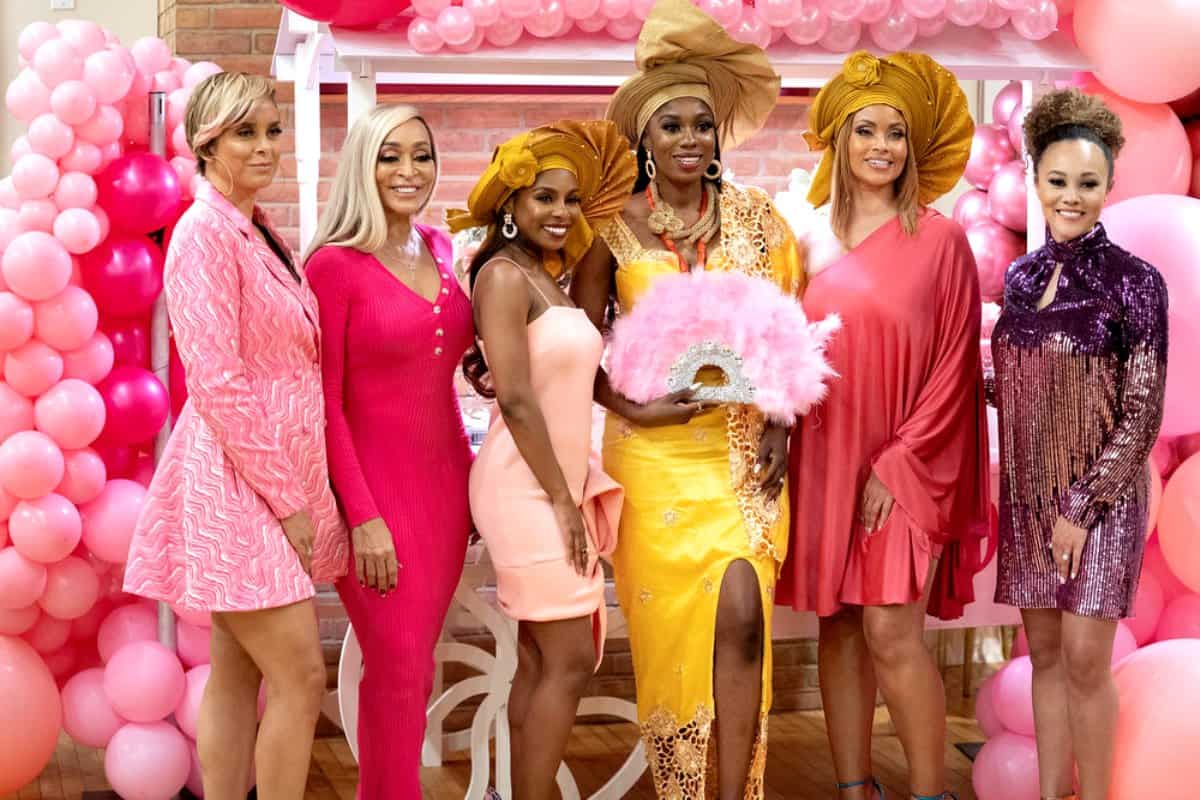 Wendy introduces her mom, Mama Sue, to the ladies. Apparently, in the Nigerian community, you are only as successful as your children. Baby Kamrynn is presented to the group and Wendy praises her mom and her sister, Ivy, for their guidance and love in making her who she is. In their culture, they spray people with money at parties to honor them. I think I could get into that tradition and the event looks like a lot of fun with dancing and good vibes.

Candiace brings Chris and Dorothy to the party. She tells the ladies that she is aware that Monique could be jailed for these charges. Ashley defends Monique even though she wasn’t in the room when the verbal altercation started. The other ladies shut her down since she wasn’t even in the room. Candiace asserts that Ashley is being paid for her support of Monique. Ashley yells, “I don’t need to get paid, I am married to a millionaire!” Candiace shadily tells her, “Not for long!” BOOM.

Ashley has been the target of Candiace’s reading and she is sympathetic to Monique. Chris shuts down this conversation and keeps telling Candiace to stop it. Karen shares that she encouraged Monique to reach out and apologize, and she gets questioned on her allegiance. I think it is blatantly obvious that she is on Monique’s side.

Next week, Juan is going to propose to Robyn? Ashley sits down with Monique to discuss the charges. Karen refuses to choose a side. Gizelle and Jamal aren’t on the same page. No duh. Phew, I swear each week it gets messier! Be well, everyone, and see you next week!