Tamra Judge Alleges Shannon Wanted Braunwyn to Keep Drinking to Keep RHOC Interesting and Denies Gossiping About Braunwyn’s Drinking, Plus Vicki Complains About Their Names Being Used for Storylines 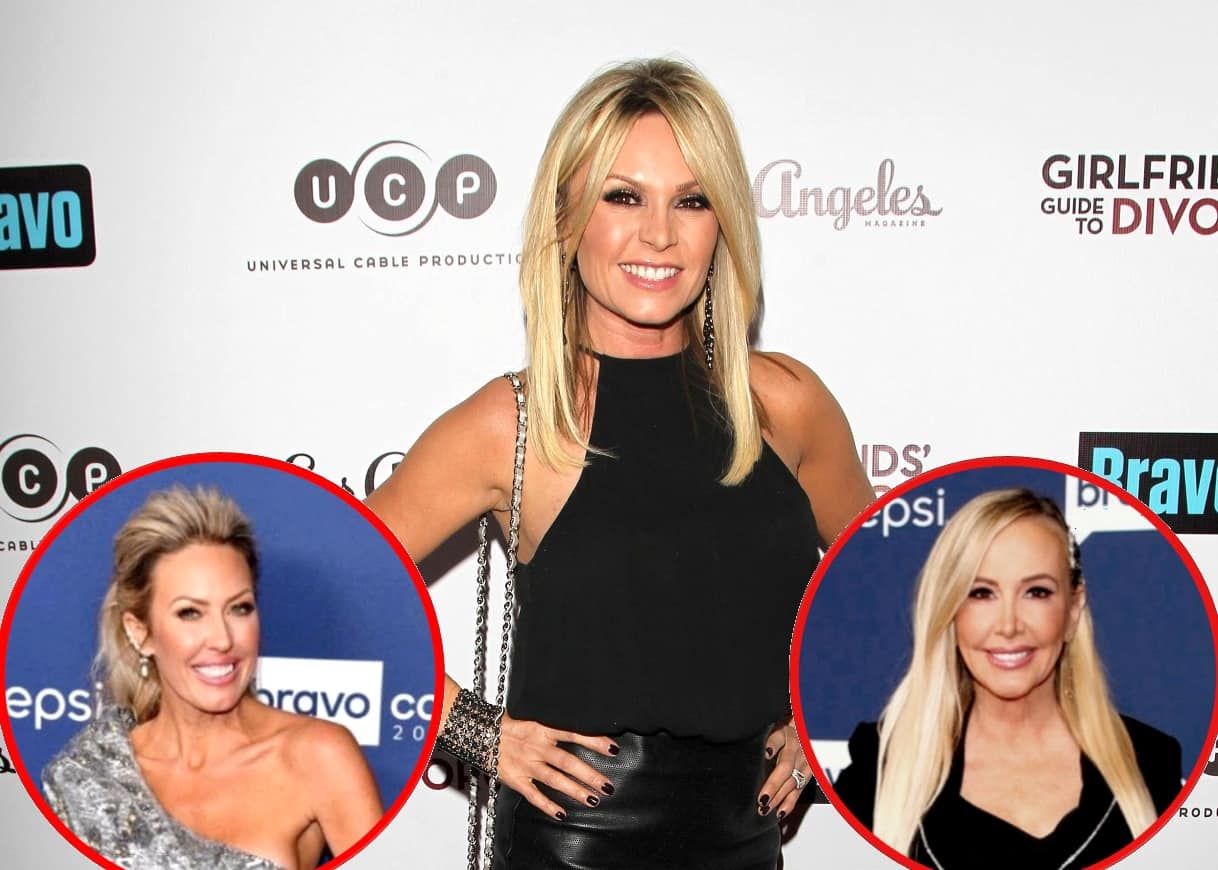 Tamra Judge is fighting back against rumors suggesting she was gossiping about Braunwyn Windham-Burke amid filming on the 15th season of The Real Housewives of Orange County earlier this year.

After it was revealed on the latest episode that Tamra had spoken to Braunwyn’s mom, Dr. Deb, on the phone, she took to Instagram to explain their conversation and target the seemingly shady behavior of Shannon Beador as her fellow ex-castmate, Vicki Gunvalson, slammed the network for including their names in the new season without offering them residual paychecks.

“I haven’t watched yet but heard I’m getting blamed for stuff,” Tamra began in a post shared to her Instagram Stories on October 22. “The absolute truth is Dr. Deb sent me a DM (in Feb) on Instagram asking me how my ex-husband was doing. I told her that it’s hard but it’s brought our family back together. Then I asked how her and [Braunwyn] were doing. She simply said better now that she isn’t drinking….. that’s it!!!!”

According to Tamra, she spoke to Shannon during the first week of production on RHOC season 15 and learned that Shannon was under the assumption that Braunwyn was not drinking because she was pregnant.

“Shannon called me and said she thinks [Braunwyn] is pregnant and she’s gonna buy her a pregnancy test and give it to her on camera. I told her don’t bother, I don’t think she’s pregnant, her mom told me she isn’t drinking anymore,” Tamra explained.

Following their chat, Tamra claims Shannon went running to production with the story.

“Shannon then contacts production and makes this big deal out of it saying, ‘We are filming a reality show she needs to drink.’ No Shannon not everyone needs to drink!” Tamra revealed. 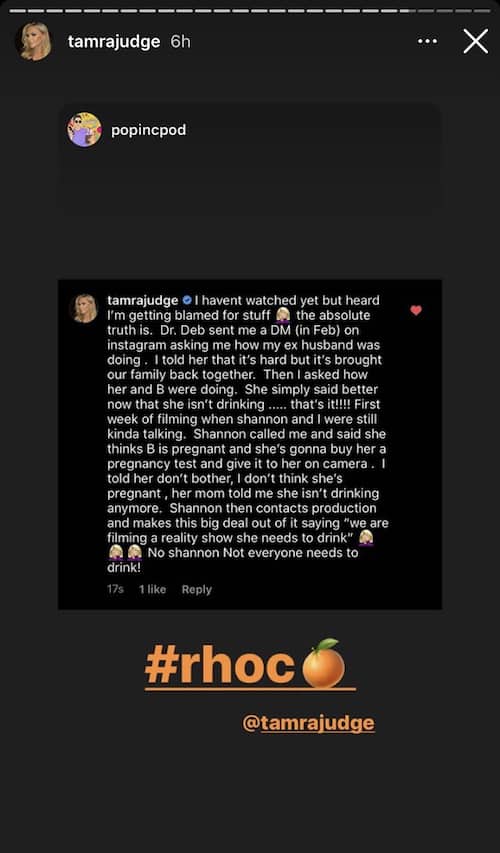 Meanwhile, on Twitter, Vicki responded to fans who suggested RHOC producers were using her and Tamra’s names for storylines on their new season.

“Is Tamra and Vicki getting a residual check from this episode cause they surely are mentioned a lot,” one fan noted.

“Nope… no residual check coming for either of us! Not cool!” Vicki replied. 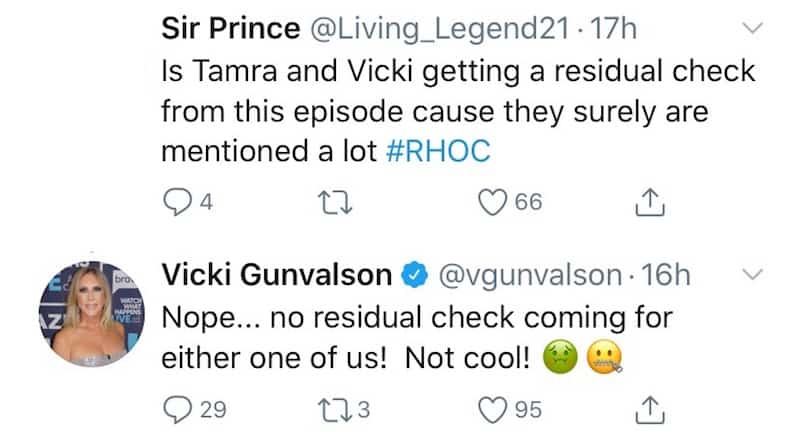 “After watching this episode, I think you all owe Tamra a paycheck because she was the main part. Who uses a storyline with somebody they didn’t want back full-time? Put some respect on Tamra Judge’s name,” said someone else, who also added that the series had “no content” amid season 15.

“Yep,” Vicki agreed. “If we weren’t good enough to be on, then why use our names at all?” 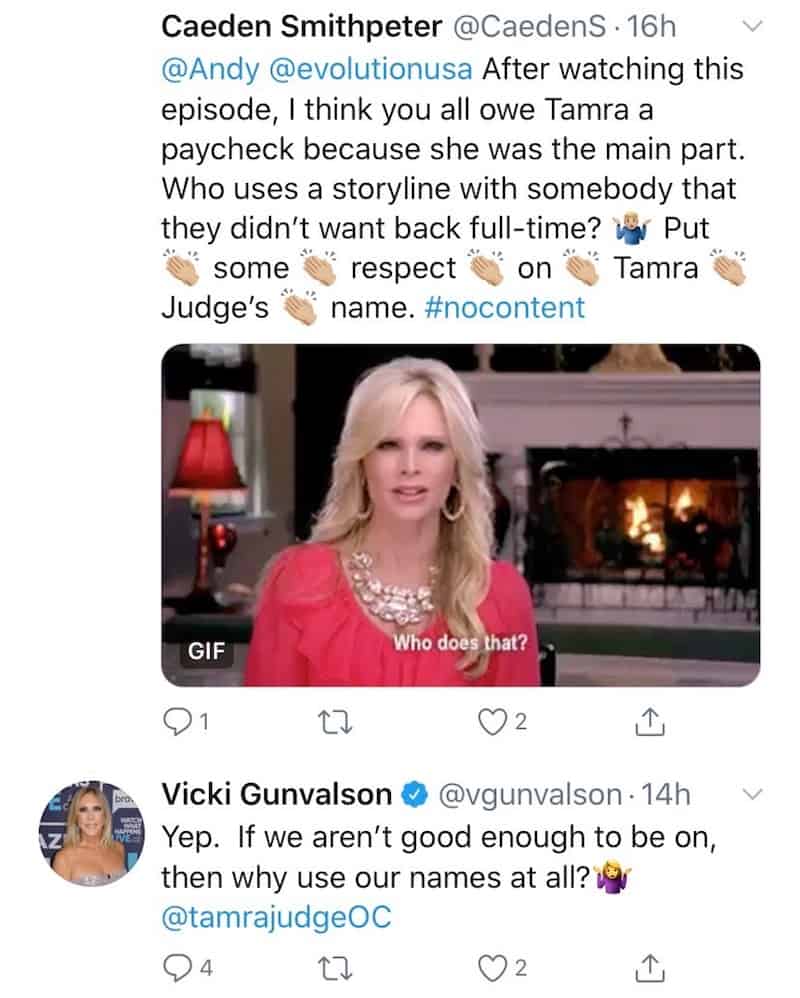 Tamra and Vicki both exited RHOC in January after spending 12 and 14 seasons, respectively, on the show.