Lala Kent took to her Instagram Stories over the weekend to share the latest photo of her baby bump.

While enjoying the warm weather of Puerto Rico, where her fiancé, Randall Emmett, is shooting a movie, the Vanderpump Rules cast member posted an image of herself in a snakeskin-print bikini after Randall shared an image of his own.

In Lala’s photo, she was seen sitting on a lounge chair with her hair pulled back into a messy bun and a makeup-free face. 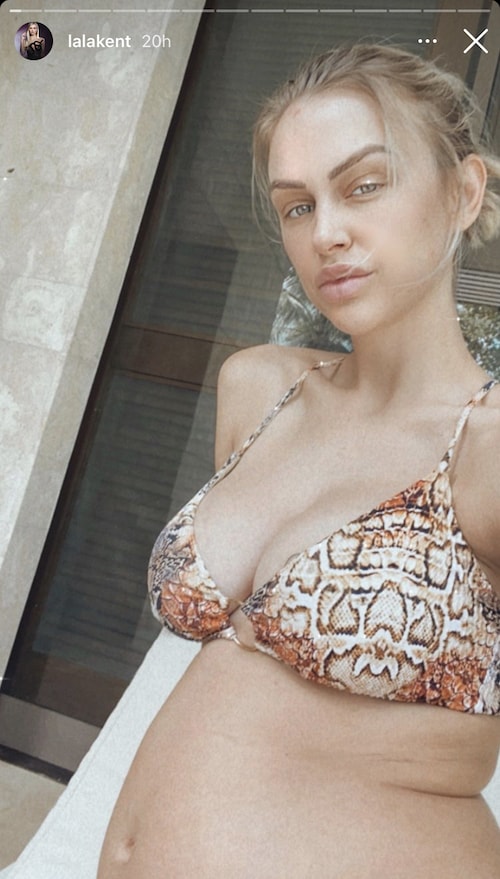 “Saturday,” he wrote in the caption of his November 7 photo, which featured a glimpse at Lala’s baby bump under her Friends T-shirt.

Lala and Randall first announced their baby news in September as she celebrated her 30th birthday.

“Today is my 30th birthday and for my 30th birthday, I had the best gift given to me… My body also helped out, too… I am pregnant!” Lala revealed on an episode of her and Randall’s podcast.

Lala’s baby girl will be the first for her and the third for Randall, who shares two older daughters with his ex-wife, Ambyr Childers.

During a recent appearance on Katie Maloney‘s podcast, Lala opened up about her strict co-parenting ways with London and Rylee.

“If my girls leave toys out, I tell them, ‘If it’s left out again, it goes bye-bye because there’s another child that doesn’t get to go to Target and get whatever they want.’ So it goes to them,” she explained on You’re Gonna Love Me.

“[The pregnancy pact] was real!” Lala told Entertainment Tonight in September. “It sounds so cheesy, but I have always been hell bent on having my children grow up the way that I did, which was very much, like, my mom was friends with all my friends’ parents and it was so much fun.”

Stassi Schroeder is due to give birth to a baby girl in January, and Lala, along with Brittany Cartwright and Scheana Shay, is due in April.