Home Featured Posts RHOC’s Kelly Dodd Confirms Mom Bobbi is in ICU Battling COVID-19 and Offers Update on Her Health, Plus She Pokes Fun at Masks and Denies Getting Her Mother Sick

RHOC’s Kelly Dodd Confirms Mom Bobbi is in ICU Battling COVID-19 and Offers Update on Her Health, Plus She Pokes Fun at Masks and Denies Getting Her Mother Sick 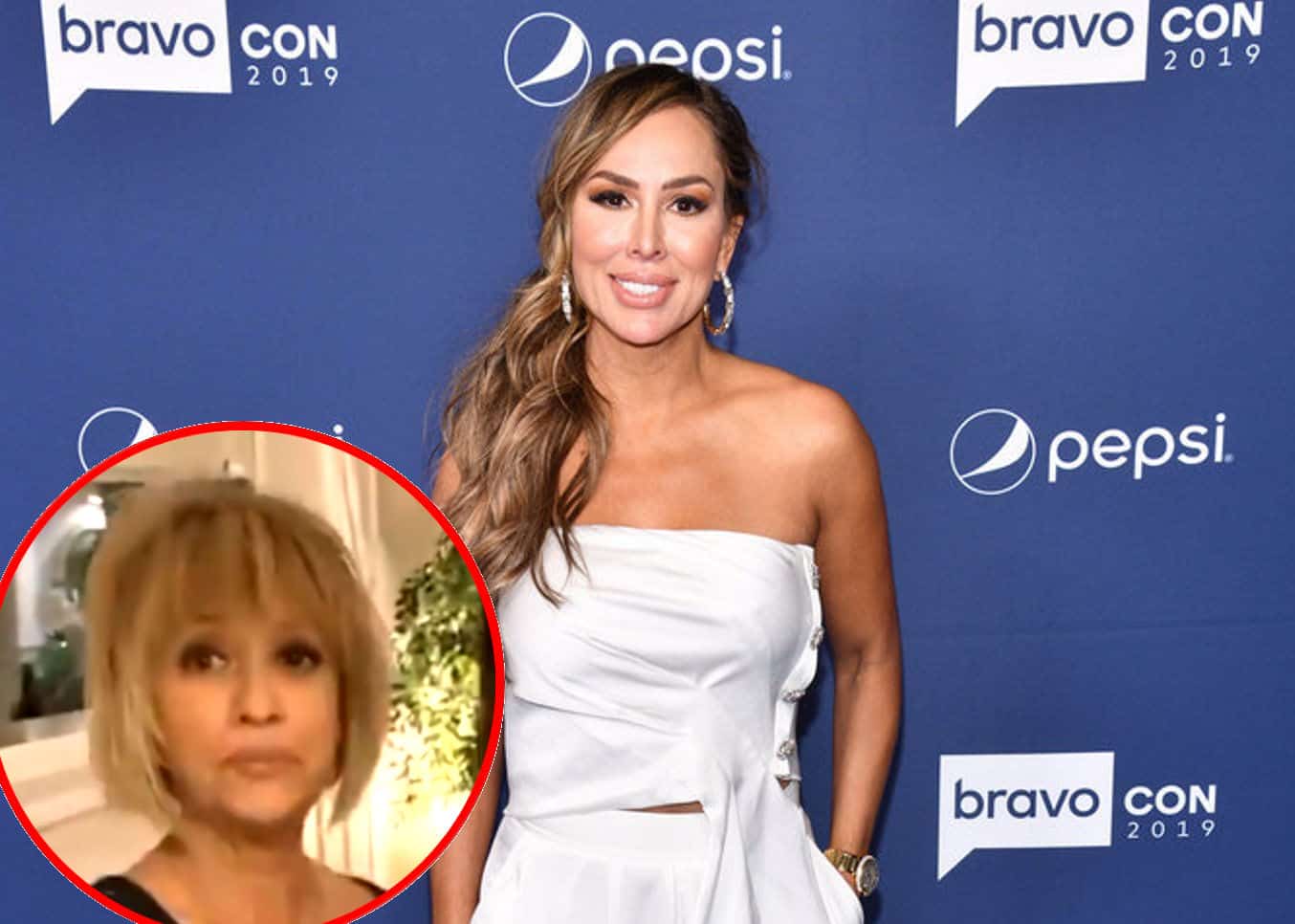 Kelly Dodd‘s mother, Bobbi Meza, is currently in the ICU amid a battle with COVID-19.

Although the Real Housewives of Orange County star denied Bobbi was in the ICU days ago following her brother Eric Meza‘s initial reveal regarding their mom’s health, Kelly has since offered an update on Bobbi’s condition while also poking fun at the idea of wearing a mask to slow the spread of the coronavirus and denying she was the one who infected her mom.

Kelly first confirmed on Instagram that her mother is indeed in the ICU after a fan asked her if it was fake news. Kelly had initially denied her brother’s claim over the weekend.

“She’s in ICU. Pray for my Mom,” responded Kelly on November 22. 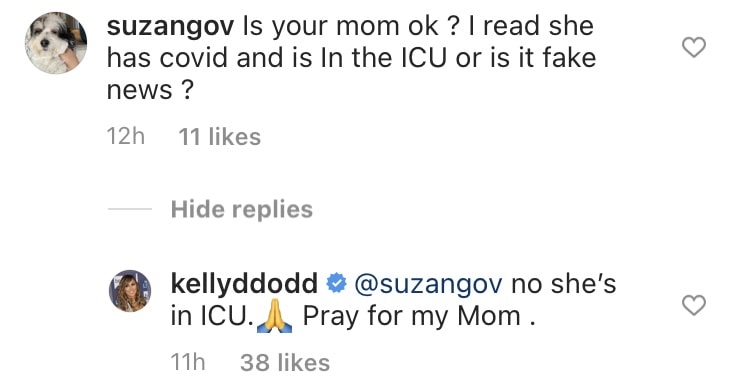 Kelly then responded to a fan who gave a nod to her past comments about COVID-19 being “God’s way of thinning the herd” by explaining why her mother was placed in the ICU.

“She’s not dying [and] she’s not on a ventilator… It’s her blood sugars we are worried about!” Kelly explained.

After updating her fans and followers about her mother’s health, the RHOC star reacted to a fan who suggested masks are ineffective.

“If your pants can’t contain a fart, you think a strip of fabric can contain a virus?” Kelly wondered. 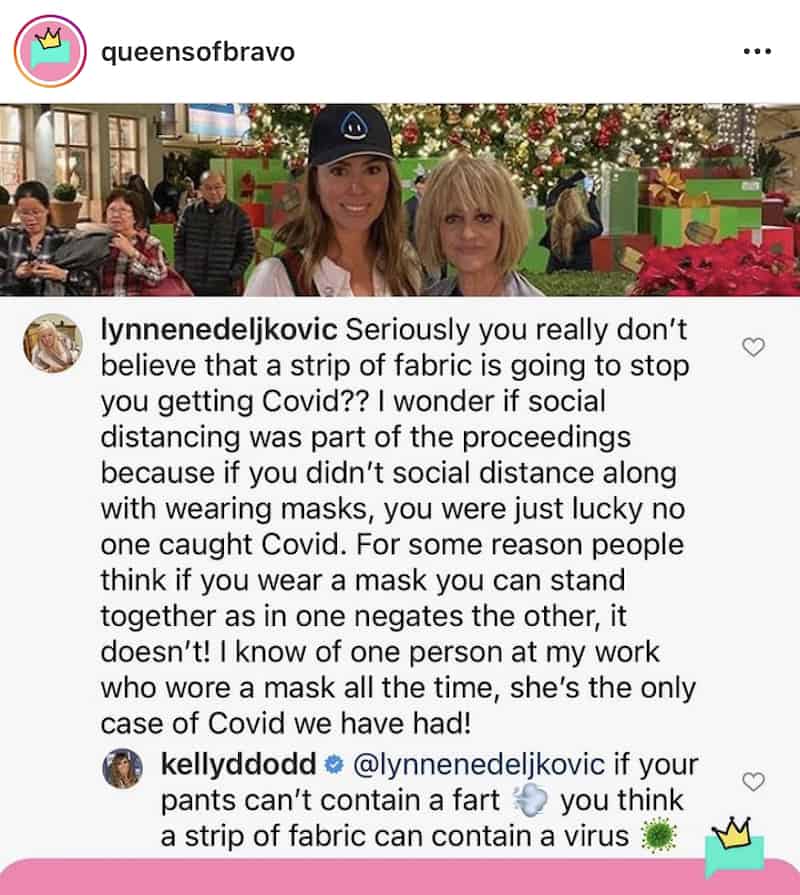 In another post, Kelly said that while her mother had been wearing a mask full-time in hopes of preventing herself from contracting the potentially deadly virus, she was still infected, and she added that she was not the person who got Bobbi sick.

“She wears a mask full-time and got the virus… I’ve never been sick or gotten anyone sick,” she wrote. 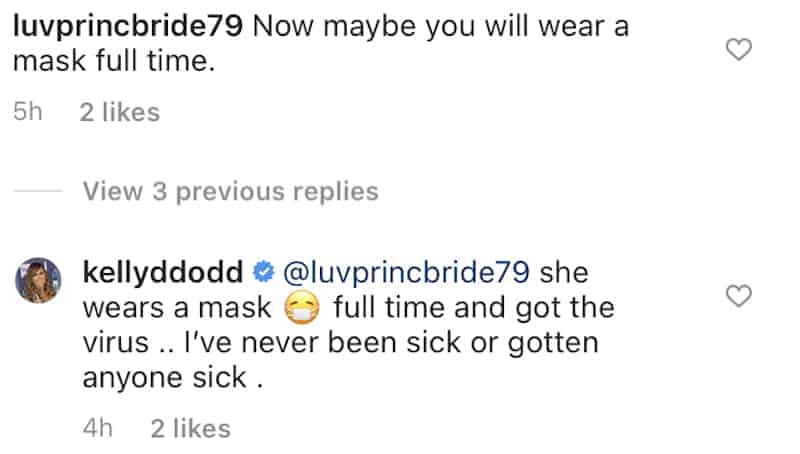 When it comes to her mom’s health status, after a fan told Kelly she hoped her mom would be okay, Kelly confirmed Bobbi wouldn’t be in the ICU much longer.

“She will be getting out of ICU soon,” Kelly shared.

While Kelly sparked rumors regarding her own possible battle with COVID-19 weeks ago when she filmed herself coughing and taking medicine, she ultimately confirmed to her online audience that she had tested negative for the virus.