Home Real Housewives of Orange County News RHOC Star Kelly Dodd’s Mom is in ICU Due to COVID-19 Infection According to Her Brother Eric Meza: “Prayers Needed For My Mother,” Plus Kelly Speaks Out

RHOC Star Kelly Dodd’s Mom is in ICU Due to COVID-19 Infection According to Her Brother Eric Meza: “Prayers Needed For My Mother,” Plus Kelly Speaks Out 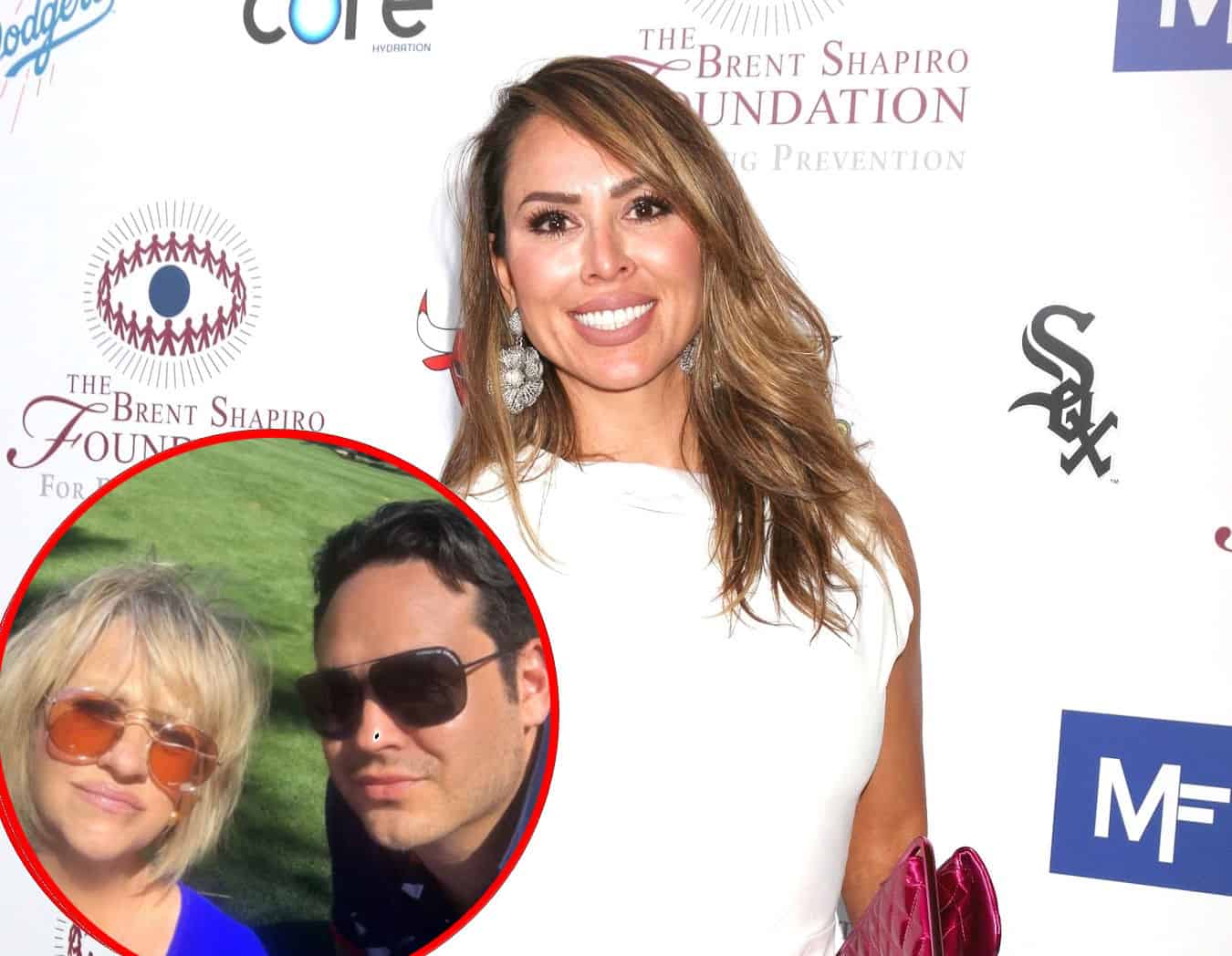 Kelly Dodd‘s mother Bobbi Meza is currently in ICU (Intensive Care Unit) as she fights for her life following a COVID-19 infection.

The Real Housewives of Orange County star’s younger brother, Eric Meza, broke the shocking and sad news last night, as he took to his Instagram page to ask for prayers for his mother. 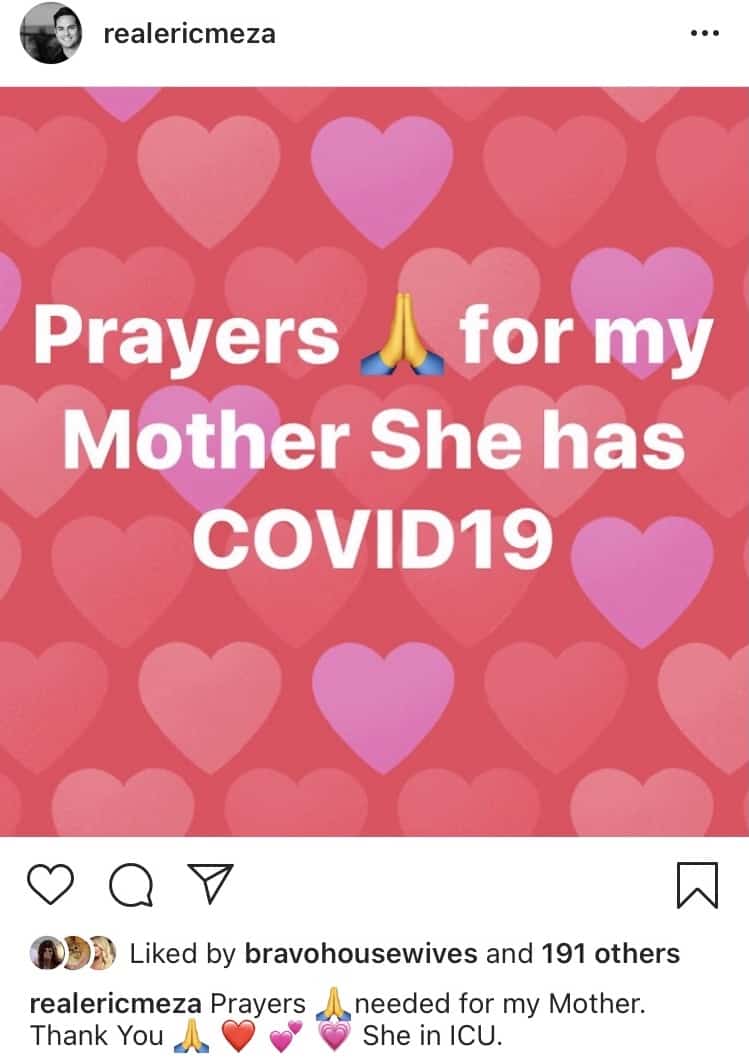 Kelly did comment on her brother’s post, seemingly denying her mom is in ICU although she doesn’t deny her mother is sick.

“Mom has me blocked! JR said she’s not in ICU,” commented Kelly in the now-deleted post.

Eric responded to Kelly’s post, writing: “Jr doesn’t know s**t! She is in ICU. I took her.”

Below is a screenshot of that exchange as retweeted by the QueensofBravo Twitter page. 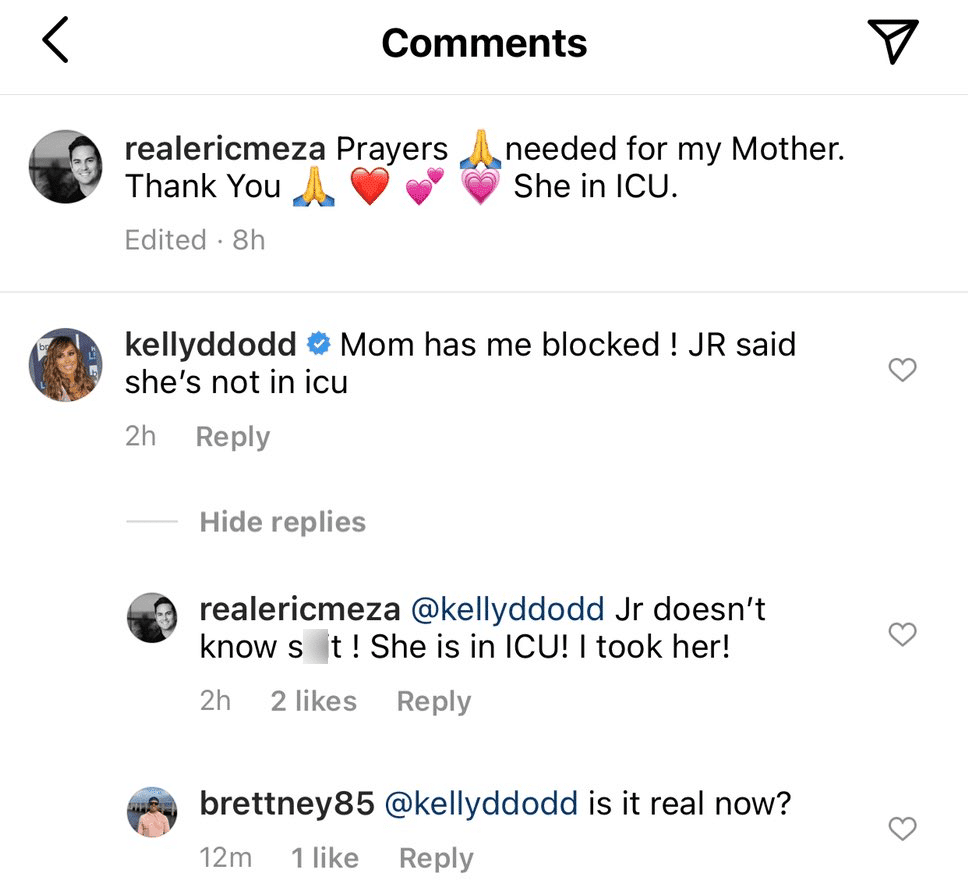 Eric was met with a ton of support in the comments section of his post, with many of his followers offering their prayers and wishing his mom a speedy recovery.

One commenter did bring up Kelly’s past controversial comments about the Coronavirus as she has been met with a ton of backlash in recent months with some fans accusing her of not taking the virus seriously.

Later, Eric responded under the post, making it clear that he doesn’t share the same views as his sister.

” My views are different. Look at my Facebook,” responded Eric.

Kelly also made headlines last month after she came down with a sickness just days following her outdoor wedding to Rick Leventhal. She however confirmed later that she did not have COVID-19, as she shared her negative test results for the virus.

Kelly has had a rocky relationship with both her brother and mother and while she appeared to make amends with her family during the last season of the RHOC, things still appear to be rocky between them. Just last month, she called out her brother Eric on social media after he laughed at a meme shared by Vicki Gunvalson, which poked fun at her.

The Real Housewives of Orange County airs Wednesdays at 9 p.m. on Bravo.