Home Vanderpump Rules Jax Taylor Says Tom and Ariana Are “Not Healthy” for Him, Wants Vanderpump Rules OGs to Have a “Parents” Spinoff, and Shares Why He Will Be Okay Financially If Show Gets Canceled

Jax Taylor isn’t planning to go back to work at SUR Restaurant even if Vanderpump Rules is renewed for a ninth season.

During a recent Instagram Live appearance, Jax spoke about the future of the show before explaining his relationships with Scheana Shay, Tom Sandoval, and Ariana Madix and revealing he has a couple of television shows in the works.

“I haven’t bartended in three years, four years. My SUR days were over a couple of years ago, to be honest,” he told a curious fan during his November 24 livestream, seemingly suggesting he was only pretending to work at the venue during recent seasons of the Bravo series.

While Jax has no plans to reprise his role as a bartender at Lisa Vanderpump‘s restaurant, he does want to continue his role on Pump Rules and hopes that production will resume soon.

“I think it would be fun to follow the dads around. And then the younger kids, like James, they could have their show,” he said of the series’ future. “We’re all in the next phase of our lives and the thought of going to SUR, I don’t think I can do it. The younger guys can take care of that.”

Rather than have a ton of full-time cast members on season nine as they did during season eight, Jax told his fans and followers that he would like to appear on a new series based upon the lives of the OGs, most of whom are currently expecting their first children.

“I think they need to hone in on the fact that we’re parents now,” he said. “We can’t go back to the way it was. It would be ridiculous to see us back at SUR. It’s gotta be about the next chapter of our lives, [like] a parents kind of thing. The playdates are going to be amazing [and] I think it will be funny to watch all of us with our kids.” 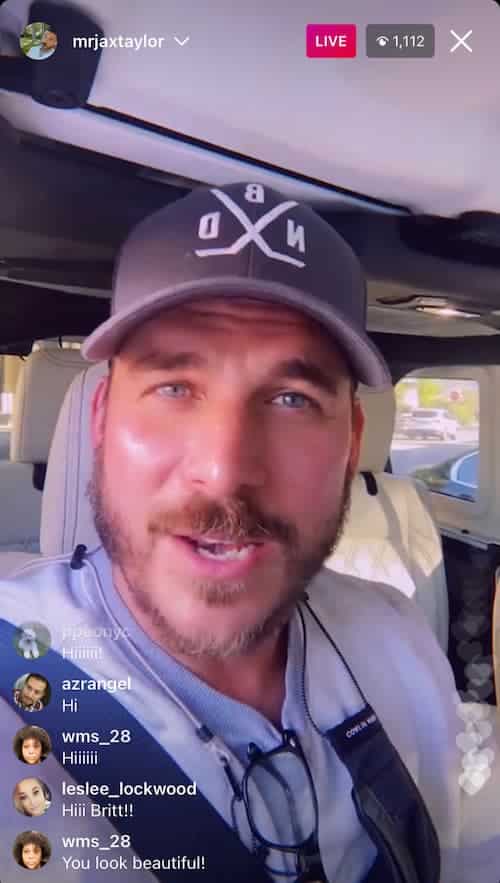 Although Jax hasn’t been seen with Scheana for some time, he confirmed the two of them still talk.

“The reason I don’t mention Scheana is that she lives in San Diego so we don’t get to see her a lot. It’s a three-hour drive. I have no problem with Scheana, I know some other cast members do [but] I’m still friends with Scheana,” he confirmed, giving a nod to Lala Kent and Stassi Schroeder‘s current feuds with his castmate.

As for Sandoval and Ariana, Jax said that he doesn’t “have room for [them] in [his] life.”

“The arguing and negativity is not healthy and I don’t want to be around it,” he explained. “[There’s] nothing wrong with Sandoval. He’s a great guy. I’ve spoken to him once in the last year. Sometimes you go separate ways. I’m starting a family and I want to surround myself with other couples who are starting families.”

According to Jax, he believes Pump Rules will be back for a ninth season next year. However, he’s also at peace with the fact that it may not.

If the show doesn’t return, Jax said he has plenty of other things to focus his attention on.